This Colorado Cottage is Only 450 Square Feet

This Colorado Cottage is Only 450 Square Feet

A Colorado couple borrows ideas from the past to create character and authenticity in their new mountain cottage.

To accommodate the height restrictions imposed by the local building code, the slope of the property was graded and lowered into the hillside.  In turn, that meant the roofline had to become steeper. Dormer windows were added to increase the volume of space inside the house.

The kitchenette’s countertops are honed Silestone. The misty green color of the cabinets was a collaboration between the homeowner, builder and mill worker, Martin Shea, after the trio was inspired by a sage leaf they examined together.

Eye-catching details, like wide trim around the windows, add Craftsman charm to the simple cottage. 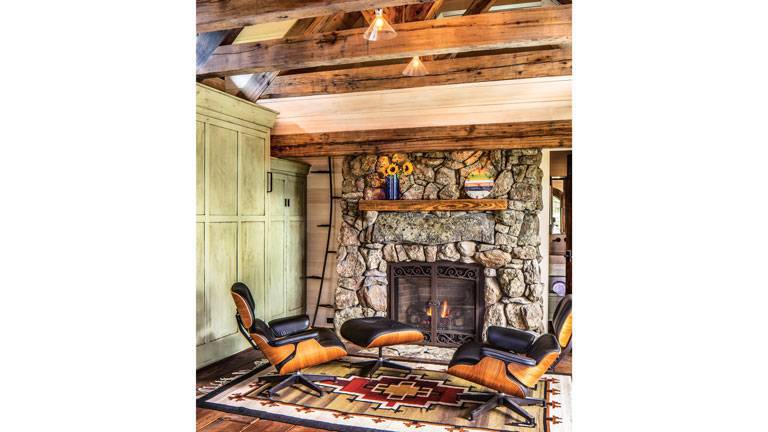 The interior design concentrates on a mix of textures with just a hint of color.  All that’s needed for this conversation area’s focal point is a pair of sleek chairs juxtaposed with a Native American rug. The harmony of textures prevails in the space, with only small doses of color coming from the rug, built-ins and mantel decor. 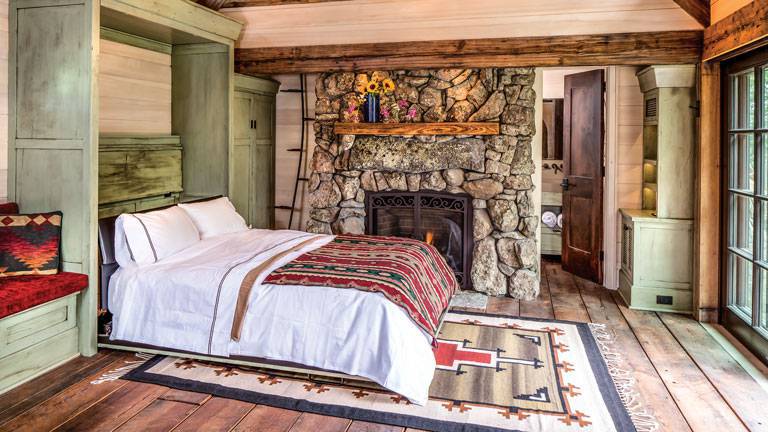 When it’s not in use, no one would suspect a queen-sized Murphy bed is hidden within the wall cabinet. Locating the bed next to the fireplace provides warmth, literally and figuratively. 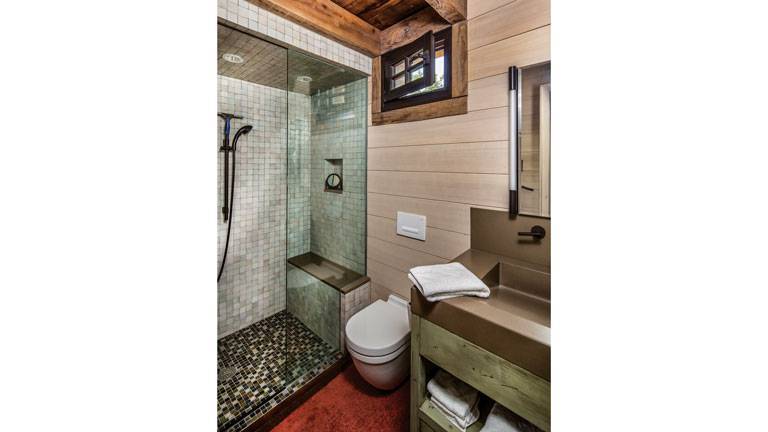 The bathroom’s smooth concrete sink is another example of alternative texture in this tiny cottage.  Beneath the sink, cubbyholes for towels provide space-saving storage. The room also features another porthole window that, like the one found in the front door window, tilts. 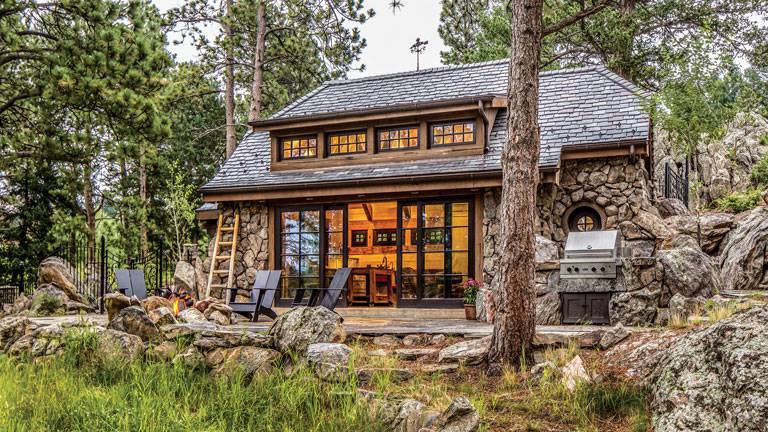 Within the boundary of the existing acreage, the cottage is flanked by massive granite boulders. To integrate the structure further, the exterior features a rock veneer tapering toward the ground. The entire flagstone patio, accented with natural granite, maintains a consistent design aesthetic blending interior and exterior. To accommodate the height restrictions imposed by the local building code, the slope of the property was graded and lowered into the hillside.  In turn, that meant the roofline had to become steeper. Dormer windows were added to increase the volume of space inside the house.

Written by Gloria Gale
Photography by Bill Mathews
As conservators of a mile-high-plus property just outside Denver, a couple treasures their three acre domain set amidst massive granite outcroppings and stands of pine and spruce. The surroundings invite exploration, and along the trek, one very visible element couldn’t be ignored: the crumbling remnants of a small outbuilding.
“We enjoy mountain living and want to share it with our guests.  Along with my interest in goldsmithing, I needed a studio. To accommodate both, the goal was to remodel the outbuilding,” the homeowner says motioning to a grassy slope towards what is now a storybook cottage. “It’s hard to believe there was once a dilapidated little building right here.”
The original handcrafted structure, circa 1930, was beyond salvaging. “It had to be demolished completely before we could begin,” says Peter Boes, project architect with TKP Architects hired as part of the design team.
Because the county considered the outbuilding a “nonconforming” structure, the new design couldn’t exceed the exterior dimensions already in place, including its height. “That gave us just 450 square feet to work with,” says Peter. “We weren’t going to be able to build up, so we determined we would have to dig down.” 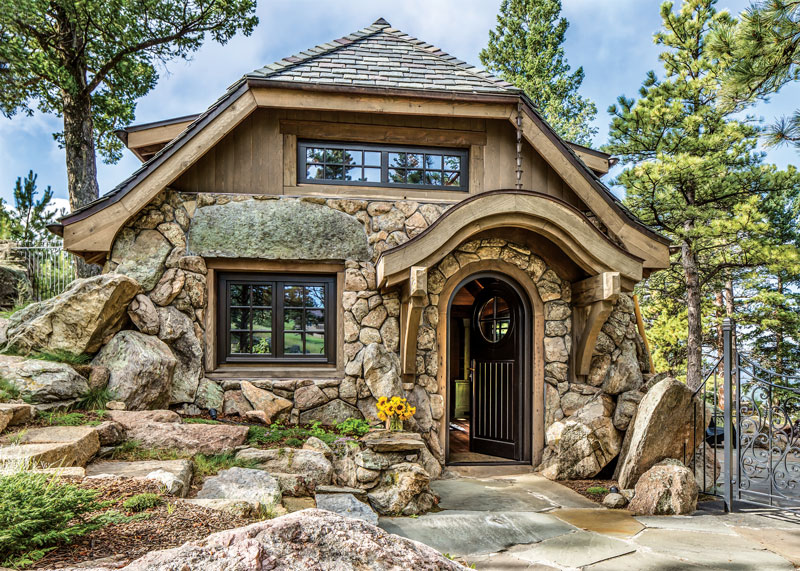 The contractor, Cress Carter, general manager of Old Greenwich Builders clarifies: “We had to sink the footings down into the hillside slope, graded to accommodate maximum light. Only then could we build the exterior walls. I recall we had to chisel out at least four feet of solid rock — something none of the crew had done before.”
Because the homeowners didn’t want to rob the existing property of its natural beauty, numerous individual boulders were brought in from out of state during the six-month construction period. Each boulder had to be strategically placed — a daunting task when using a crane.
The effort was well worth it. Nestled into the landscape, the charming dwelling now appears to emerge out of the surrounding rock outcropping. The tiny cottage boasts a natural slate roof, copper flashing and stone veneer. “The exterior looks like it’s been in this environment for a century,” says the homeowner.
Though the cottage is new, it borrows an aesthetic from historic U.S. National Park buildings the owners visited during a trip to the Black Hills of South Dakota.
In keeping with the historic nature of the property, the interior design elements also pay homage to the past. “Considering timber-framed ceiling trusses were used extensively in the park buildings, it was a logical design element I wanted to incorporate into the structure,” the homeowner acknowledges. “Ironically, we happened to find an old Civil War ammunition factory in Louisiana where we secured a cache of antique long-leaf yellow pine wood for the truss system spanning the ceiling and the wide-plank flooring.”

The sturdy, natural-colored beams coupled with the moss-stone fireplace (a rescue from the original structure) contribute to “a sense of muscular architecture,” says Peter. 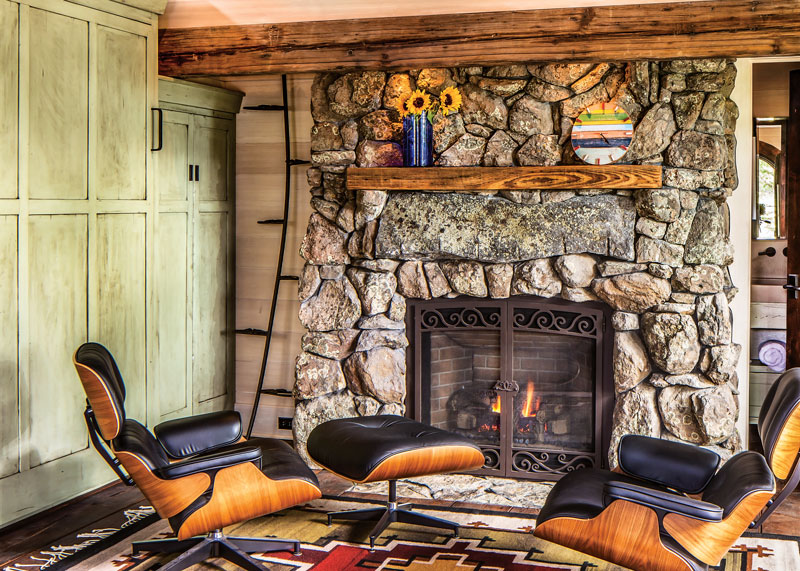 Essentially, the cottage is one large room streamlined to incorporate a Murphy bed, a sleeping loft, a banquette and a series of built-ins. Everything in the cottage is purposeful without compromising space. Hardwood cabinets holding jewelry-making materials flank the walls.  Although there is running water in the cottage, the couple didn’t want a full-scale kitchen. Except for the occasional cookout, they prefer to host meals at the main house.

Save for two classic Eames chairs in front of the fireplace and a mobile island, minimal furnishings maintain a sense of calm in the tiny space. Anything extraneous finds a home in the two built-in wall cabinets or inside the banquette, which doubles as a reading nook and a spot for overflow seating. Even the sleeping loft, accessible by a reed-thin, Jeffersonian ladder, holds a queen-size bed that is nearly out-of-sight from below.
Incandescent bulbs, in both pendants and spotlights, accent the ceiling’s trusses, creating a warm glow at night. During the day, natural light spills in through banks of dormer windows. In addition, 13-foot-long sliding glass doors span an entire west-facing wall, increasing the small home’s sense of space and light.
“The glass doors opening up onto a flagstone patio and forest beyond is like having an outdoor room,” the couple says.
Though the overall cottage design reflects a vintage vibe, thoroughly modern technology is carefully hidden through the cottage. Automatic sun shades for the sliding doors are remotely controlled to filter light and provide privacy, while radiant heat flows underneath the plank flooring, including in the compact bathroom.
Doors and windows are highly efficient, a feature particularly appreciated during the snowy Rocky Mountain winters. In the warm-weather months, the windows offer views to an abundance of gorgeous native mountain wildflowers and the animals that call the forrested property home.
It’s no wonder that although the couple’s primary house is a stone’s throw away, it’s here — in their tiny stone cottage — that they find solace. “It echoes the quiet of time passed and the beauty rooted into the natural landscape,” says the homeowner. “That’s what we appreciate the most.”