One family builds their dream lake cabin with wood from an 1880s barn. 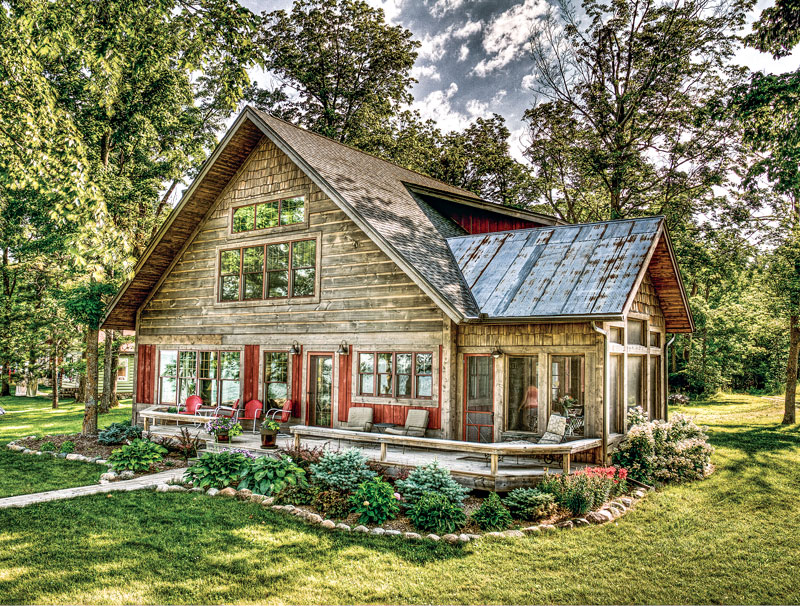 The annual pilgrimage started back in 1947, when Charles Van Werden first travelled from Iowa to north central Minnesota to fish Leech Lake with some buddies. Leech Lake – covering over 102,000 acres – was a hot spot for walleye, perch, northern pike and the elusive muskie. Stellar fishing plus pristine waters immediately hooked Charles on the area. After they had children, Charles’ wife insisted he take the family – rather than his fishing chums – to the lake. Every summer, they bunked at Carlson Resort, run by Swedish immigrants Auggie and Mettie Carlson. Through the years, families expanded, producing new generations of devoted cabin lovers. Despite being spread across different states, for two weeks every summer much of the Van Werden clan gathered at Carlson Resort. 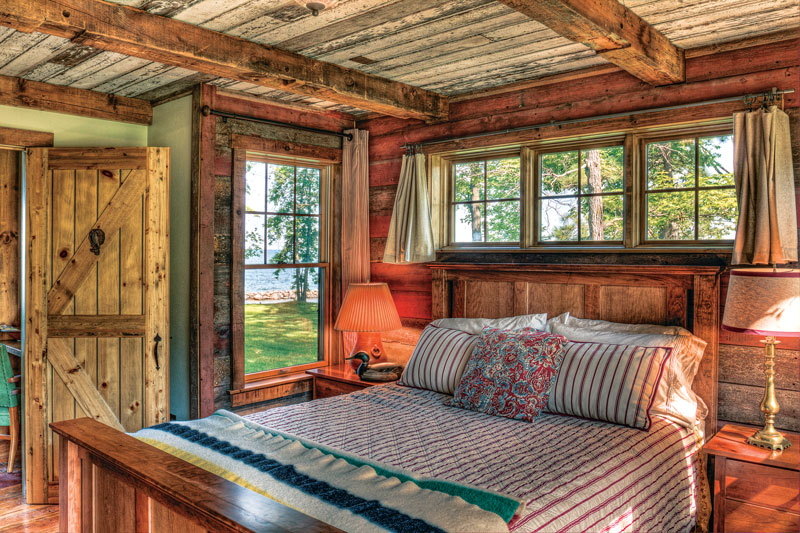 In 1975, three of Charles’ grown children bought Carlson Resort when Auggie and Mettie became too elderly to run it. By the time the fourth generation was born, several family members had purchased adjacent cabins nearby. “Camp,” as they call it, was beginning to feel mighty cramped. So when a run-down cabin located directly north of the resort went on the market in 2005, Charles’ granddaughter Jane Lorentzen and her husband John, who live 450 miles away in Des Moines, Iowa, pounced on the property. Jane then spent the next two years researching architectural styles. “We wanted to build a nice new place that looked old,” says Jane. 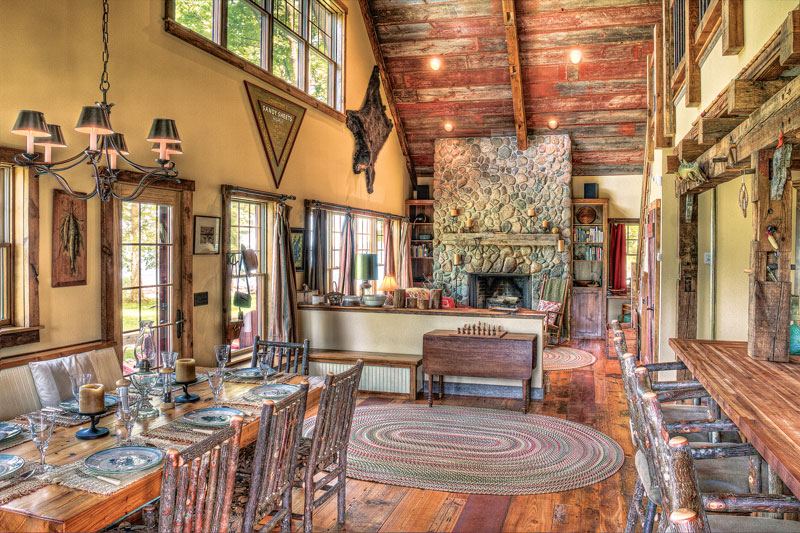 Jane was flipping through a magazine when she stumbled across a picture of a structure that exuded rustic charm. “That’s what I want!” Jane exclaimed. The couple met with Jeff and Matt Balmer, owners and chief creatives at Lands End Development (LED), a design-build firm based in Crosslake, Minn. Everyone in the Lorentzen family got to choose one element they wished to incorporate into the cabin’s design. Jane chose reclaimed wood. John picked a screen porch. Their daughter Maddie wanted a loft. Their son Will, 12 at the time, requested a fire pole. They interviewed several architects, all of whom scoffed at the notion of installing a fire pole. But when the Balmers heard the idea, the brothers exclaimed, “Cool!” “That sealed the deal,” recalls Jane. 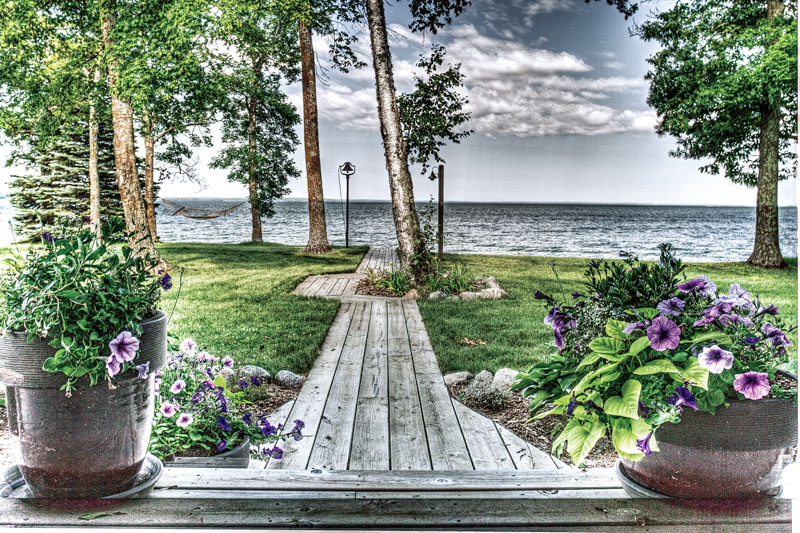 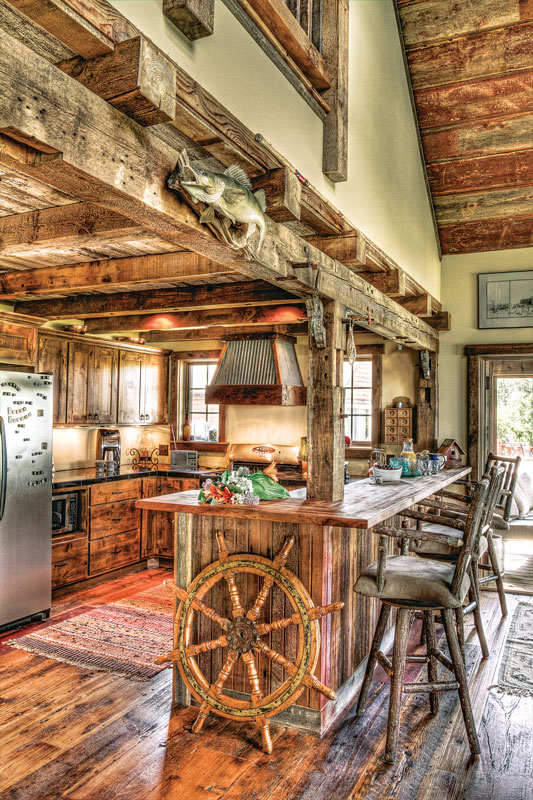 Jane’s dad knew a man in Iowa with an old post-and-beam barn that he wanted torn down. He told the Lorentzens that if they removed the barn, they could have the wood. Jeff Balmer flew to Iowa to inspect the quality of the wood and was thrilled to unearth old-growth pine that had been well preserved by mounds of hay. The Lorentzens hired someone to take down every plank, every beam, every artifact, and load it all onto a semitruck. Once the wood was unloaded, the Balmers began sorting through the material like pieces of a puzzle to see what could be used and where. Ultimately, they put every last bit of the barn back into the cabin, including decorative corbels in the kitchen and an ice hook that hangs from a peg on the fireplace mantle.

The simple floor plan places the master bedroom and two bathrooms on the main floor with two more bedrooms in the loft. The owners also incorporated a mud room into the design, complete with sink, washer/dryer, and lots of cabinets and cubbies. Hooks are for hanging coats and swimwear. In addition, drawers above and below the cabinets store flip flops, sunscreen, swim toys, and bug spray. Just outside the mudroom is the outdoor shower where folks can wash off after swimming. To help save space, the Lorentzens asked Jeff Balmer to build a built-in bench seat that runs along the wall of the dining room. The bench also provides additional storage for Jane’s sewing and crafting materials. 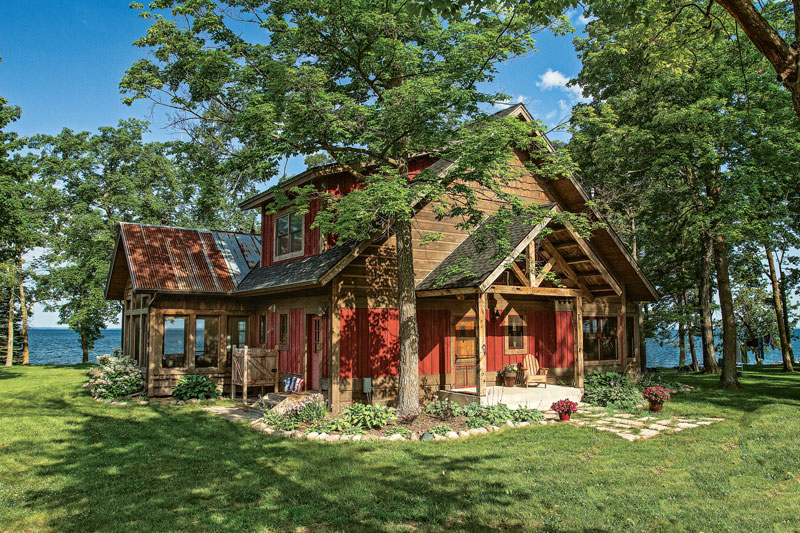 In the family room sits a small table with an ongoing puzzle; anyone who wants to contribute can do so when the mood strikes. Other cherished pastimes include cooking, reading, and sitting round the campfire devouring s’mores. “My favorite thing is to sip a glass of wine and watch the sunset,” says Jane. “It’s also fun to sit on the screen porch and watch storms blow in. The ‘pingy’ sound of the rain on the corrugated metal roof is soothing.” When the weather’s nice, though, the family spends their days sailing, skiing, wakeboarding, tubing, and jumping from the water trampoline. They also have a fish fry every summer – a tradition that started decades earlier when Auggie introduced Jane, her brothers, and their cousins to fishing with long wooden cane poles. “He was very patient, even when we got hooked in the head with fishhooks,” recalls Jane. “When we came back later, our parents met us in the harbor with their Super-8 cameras to film us with our loot.” Auggie then taught the boys how to clean the catch, while Mettie prepared a fish fry.

Traditions abound at the Lorentzen cabin. After a big storm, the kids collect crawdads off the beach. Or sometimes, Jane’s nephews will set crawdad traps using bacon, proving that every living creature does, indeed, have a weakness for bacon. Afterward, the family has a crawdad boil down by the lake, complete with potatoes and corn. The Lorentzens also host an annual “food challenge” where they present a variety of cheeses that everyone must identify by taste. So, for example, family members try to differentiate between 10-month-aged Gouda, 4-month-aged Manchego, Prairie Breeze cheese, and old-style cheddar. Tasters earn bonus points by correctly answering the wild cheese trivia question. In the heart of the summer, the Lorentzens boat to Bear Island, anchoring on the soft sugar-sand beach. The kids play catch with Burdie, the family’s 2-year-old golden retriever while the adults unload a picnic lunch of breads, prosciutto, and cheese (vital training for the “food challenge”). 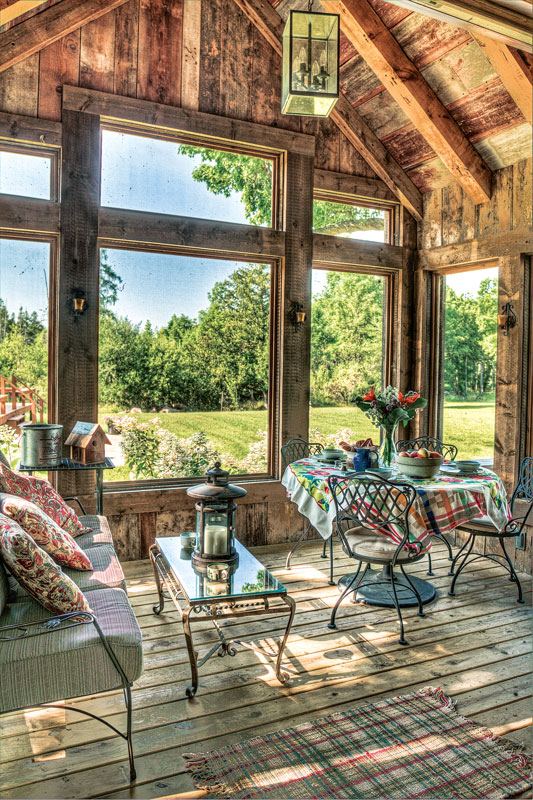 John enjoys duck and grouse hunting in the fall. Winter promises ice fishing and miles of exercise on the cross-country ski trails. Some years, Jane and John attend the International Eelpout Festival held in February in nearby Walker, Minn. Named for one of the ugliest bottom-dwelling fish, the eelpout, Jane likens this festival to a “frozen Mardi Gras.” Of course, when you’re at the cabin, every day is a party. Jane still recalls the first morning they owned the cabin. She was making breakfast when she heard the pitter patter of feet from the loft. There was the click of the gate unlatching followed by the sound of squeaky skin sliding down the brass fire pole. “When their feet hit the floor, the party had begun,” says Jane, adding, “We have a love for this place that’s hard to describe.” No description necessary. We cabin people totally get it.

Interior Design Tips From a Pro

This cabin’s “wow” factor comes from the massive use of reclaimed barn wood throughout the structure. “The reclaimed wood on the walls, ceiling, and floors brings so much character and warmth to these rooms,” says Paula Kovatovich, interior designer at Lands End Development in Crosslake, Minn. It feels old and worn, yet fresh and new. This is because the owners chose to mix these materials with warm paint colors and accessories – all of which help to create an inviting continuity throughout the home. Although hardwoods infuse rustic charm, homeowners have to be careful not to overwhelm a space with too much wood. To help soften a “wood-heavy” space, Kovatovich suggests introducing textiles such as area rugs, soft window treatments, and throw pillows. These accents introduce pops of color and enable homeowners to personalize a space. In kitchens and bathrooms, it’s wise to include a combination of both painted and unpainted cabinetry. “Sometimes wood walls and ceilings can become too heavy, and the use of painted cabinetry or furniture provides a distinct contrast, adding allure to a room,” says Kovatovich. The juxtaposition of a stained and a painted cabinet makes each one stand out more. When it comes to designing a screened-in porch or three-season room, consider both comfort and practicality. Quite often, the porch is the most commonly used room in a cabin. Therefore, Kovatovich suggests selecting furniture that can withstand the elements, along with indoor/outdoor upholstery fabric. “Just because it’s outdoor rated doesn’t mean it’s harsh or rough feeling,” says Kovatovich. “You’d be amazed at how soft and nice these durable fabrics can be. Plus, some are fade-, mildew-, and stain-resistant, making it a great long-lasting choice.” 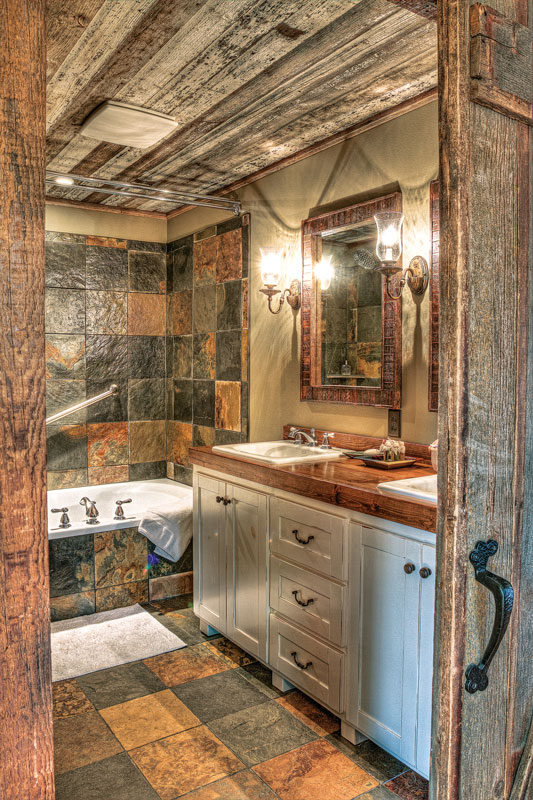 Finally, to give a new space an old, historic feel, Kovatovich recommends salvaging items such as cabinet hardware, antique doorknobs, or cool hooks. “These little details are what truly make a space unique,” says Kovatovich. “They tell a story.”

Choices That Inspire a Laid-Back Lifestyle

When helping to design their cabin, the Lorentzens nixed the notion of bedrooms, instead opting for informal “sleeping areas.” The loft has a bunk room with two sets of bunk beds and another cozy slumber spot that includes a built-in double bed with a trundle bed beneath. These areas are not closed off but rather separated by just a curtain. “The cabins I grew up in were just like this, and I loved it,” says Jane. Replacing doors with curtains opens up the floor plan and creates a casual cabin vibe. The built-in bunk beds, fashioned from white pine, each have their own shelving at the head and foot with built-in drawers underneath to store clothes and toiletries. Each bunk also has a light so that folks can cuddle up and read. “The owners insisted on building a cabin that could be put through its paces,” says Jeff Balmer, co-owner of Lands End Development. “Dirty dogs, wet kids, sandy floors – it’s all okay.” The family even named the cabin “Sandy Sheets” because Jane recalls coming up from the beach as a child, and despite her best effort to rinse off her feet, she inevitably found grains of sand in her bed every night. “It drove me nuts at the time,” says Jane. “But now it’s a great cabin memory.” Frequent contributor Christy Heitger-Ewing thinks every cabin owner should consult children when designing their retreat to help ensure an innovative layout.
★