Getting the most from an off-grid retreat. 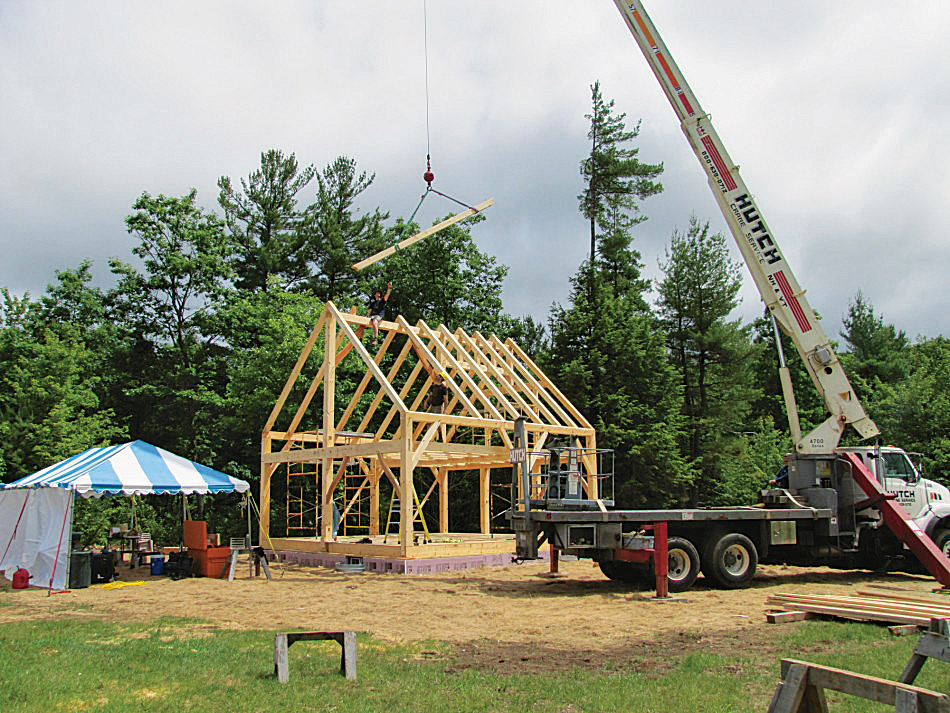 Raising the frame. Principal joinery is mortise and tenon secured with hardwood pegs.
Rome. Maui. Buenos Aires. Mike Andrews routinely touches down in glamorous destinations around the globe. But when this United Airlines pilot is not flying the friendly skies, his favorite stopover is his off-grid hideaway in Bradford, N.H. 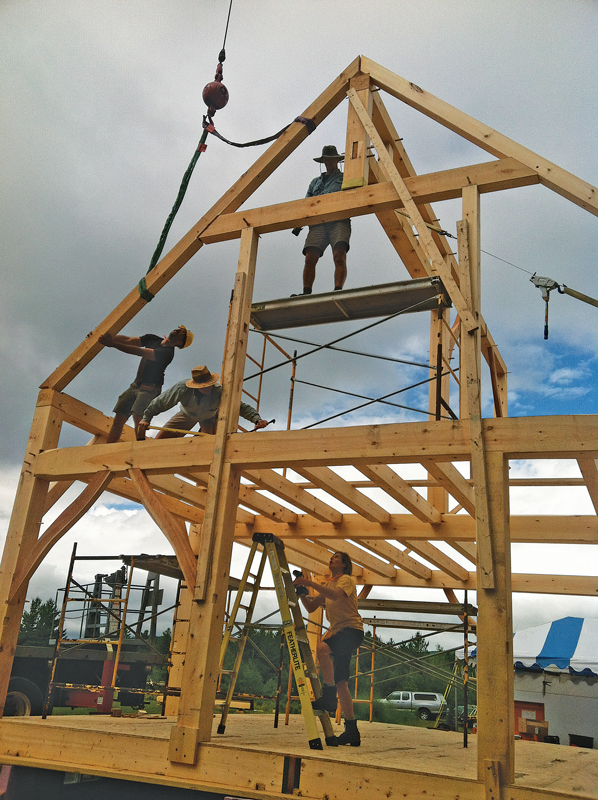 The TimberHomes Vermont crew assembles the cabin’s wooden posts and beams.
Andrews grew up in Hampton, N.H., and fondly recalls boyhood summers on nearby Pawtuckaway Lake. “We would hook a canoe to a motorboat and go to the little islands,” he says. There, the gang would pick blueberries, build tree forts and fish all day. Andrews went on to earn a degree in mechanical engineering from the University of New Hampshire and earned his wings in the U.S. Air Force. In 1994, he purchased a lot south of Lake Sunapee with the intention of building one day. Meanwhile, as adjoining lots came up for sale, Andrews increased his original 400-acre landholding. While researching potential local builders, he came across TimberHomes Vermont (Vershire, Vt.). “I really liked how they built things,” notes Andrews. “I worked building timber frames in college. They’re like a work of art if done right.” TimberHomes Vermont co-founder Josh Jackson signed on to the project. The frame for the two-story, tall-posted cape was constructed and assembled on site in 2012. 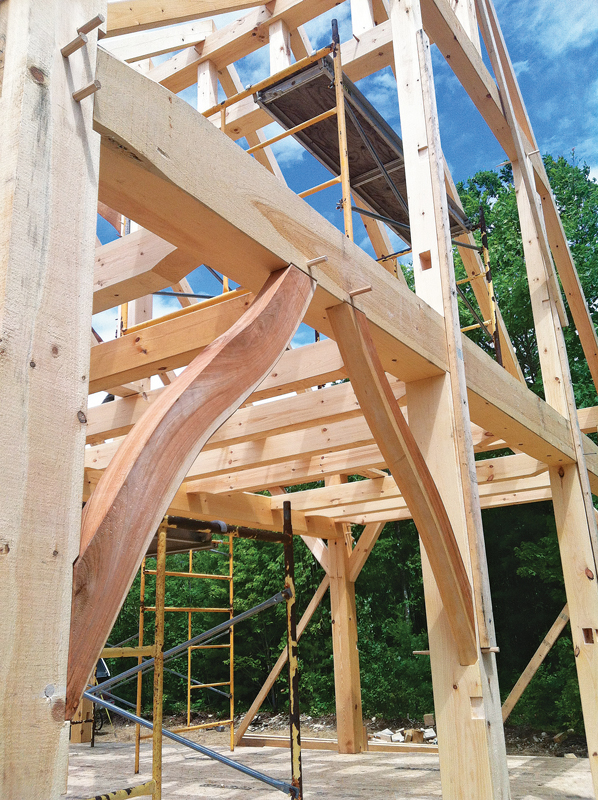 Straight white pine timbers are balanced by naturally curving cherry braces.
Timbers are white pine with naturally curved cherry braces. All principal joinery is mortise and tenon with hand riven hardwood pegs. Roughly 1,000 square feet on a 22x24 footprint, the cabin includes an additional 550-square-foot walkout basement. The structure is built tight with a combination of blown in cellulose insulation and an inch of rigid insulation behind whitewashed pine walls. From the start, Andrews wanted the cabin to be off-grid and as self-contained as possible. “The main reason was philosophical,” Andrews says. “I think that’s where we should be going, producing our own energy. And because the location is far from power lines (a half mile from the nearest pole), it didn’t make sense to bring in electricity.”

“The cabin has ideal solar orientation without any obstruction,” notes Vladimir Hromis (owner of V.H. Energy in Sanbornton, N.H.), who installed both the solar electric system and a solar hot water system at Andrews’ place in 2014. 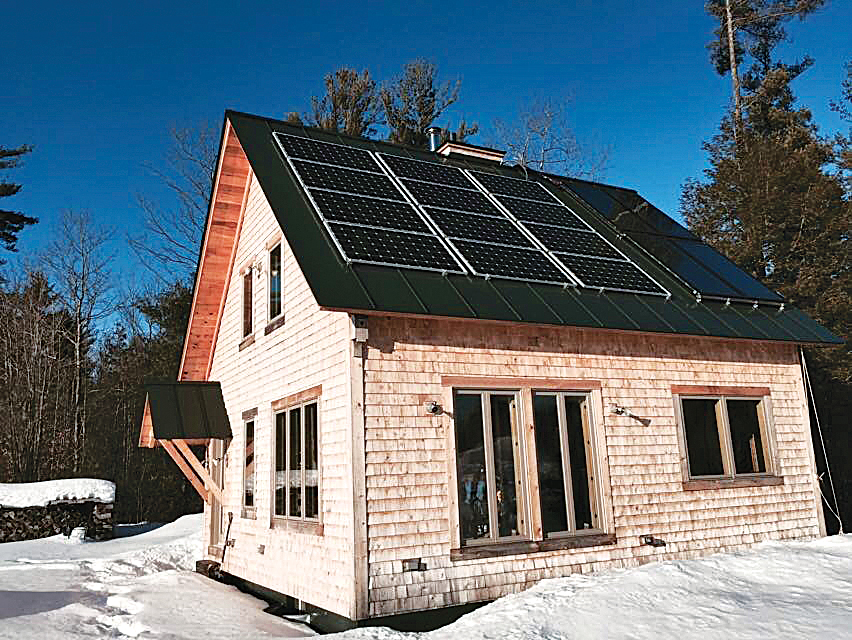 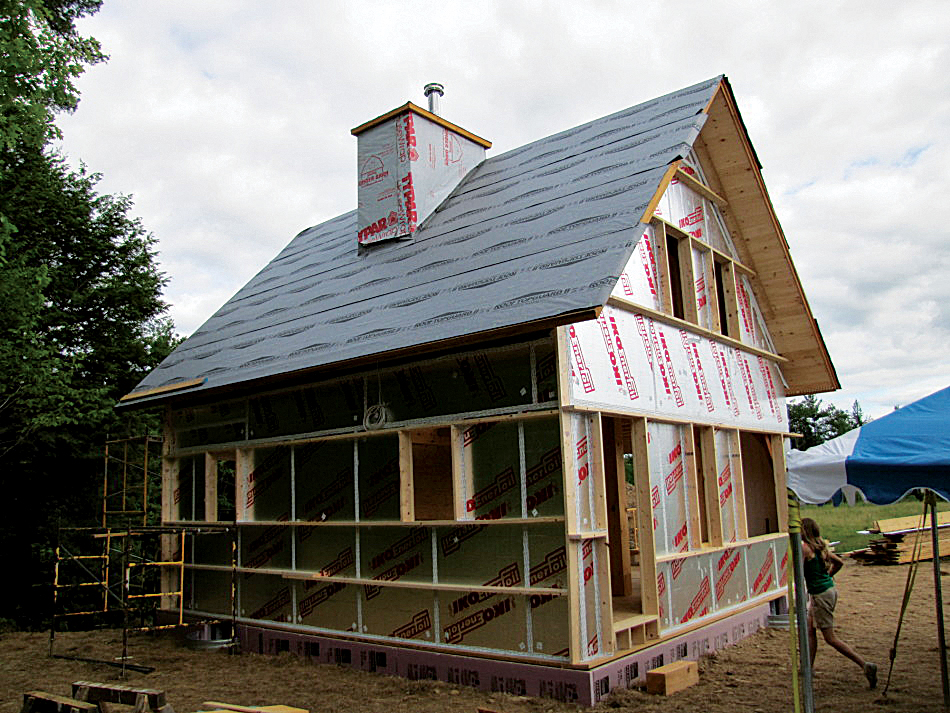 Mounted on the cabin’s roof are 12 photovoltaic panels for producing electricity and four flat plate collectors for hot water and space heating.
The 3.3-kilowatt photovoltaic system produces enough energy to power cabin lights, a well pump and the heating system. Eight batteries store the energy produced by a dozen 275-watt solar panels mounted on the roof. “I could have gone with eight panels, but twelve makes it a more robust system,” explains Andrews. “Most days, the batteries are already fully charged by 10 to 11 in the morning.” Four flat plate solar panels (aka collectors) mounted on the roof heat a radiant floor in the basement. The soon-to-be-finished kitchen has a microwave, toaster oven and a Peerless Premier gas range with battery spark ignition. There’s no sink or running water yet, so Andrews carts in 5-gallon jugs. A whole-house composting toilet with ultra-low flush is from Green Energy Options in Keene. The composting unit in the basement is easy to maintain, says Andrews. Between flight assignments, Andrews likes nothing better than “piloting” a backhoe loader. Managing roads and trails on his wooded property takes up much of his downtime. A big part of the 1,100-acre spread is an FSC (Forest Stewardship Council) certified tree farm. Previously, the area had been “high graded.” That is, the highest grade (biggest, tallest, straightest) trees were logged, to the detriment of the forest’s ecosystem. Now, Andrews observes FSC standards and practices low grading, periodically harvesting and thinning out poorly formed trees, so the better ones have more space to grow and spread their seeds. 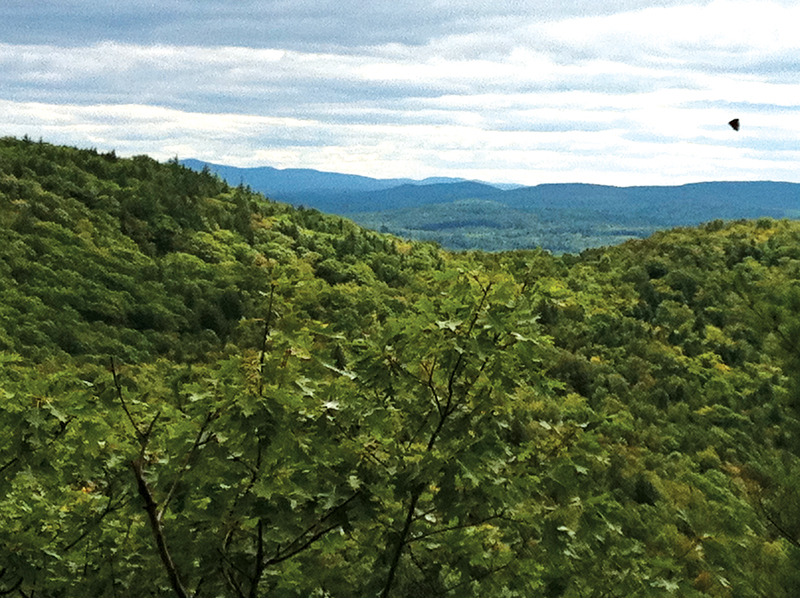 The main view from the cabin towards the west is Lovewell Mountain south of Mount Sunapee.
A gate keeps out motorized traffic, but Andrews welcomes visitors on foot. “The first thing I did when acquiring land was to take down ‘No Trespassing’ signs,” he says. “Lots of people come through hiking, cross-country skiing and snowshoeing.” When he’s not in the woods, Andrews enjoys the water. A wetland bog complex runs down the entire western side of the property. There, a flat-water brook impounded by a beaver dam is a favorite spot for kayaking. 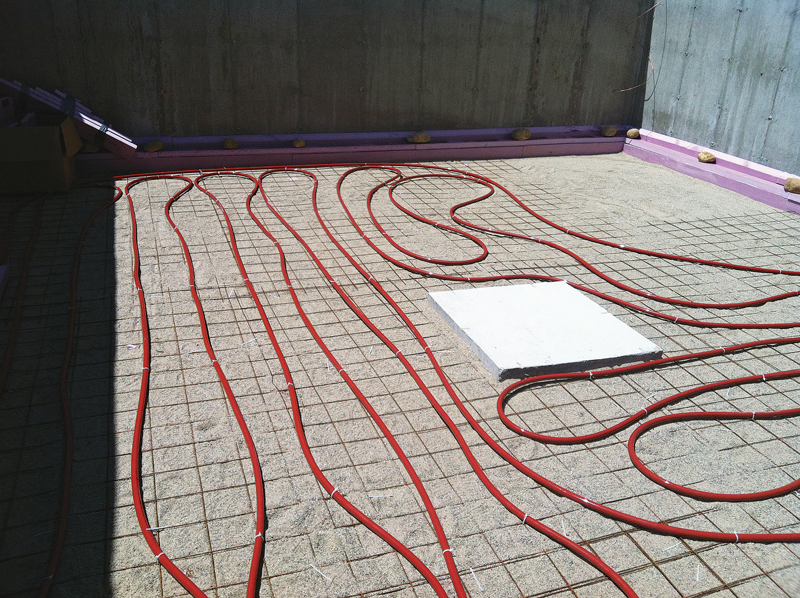 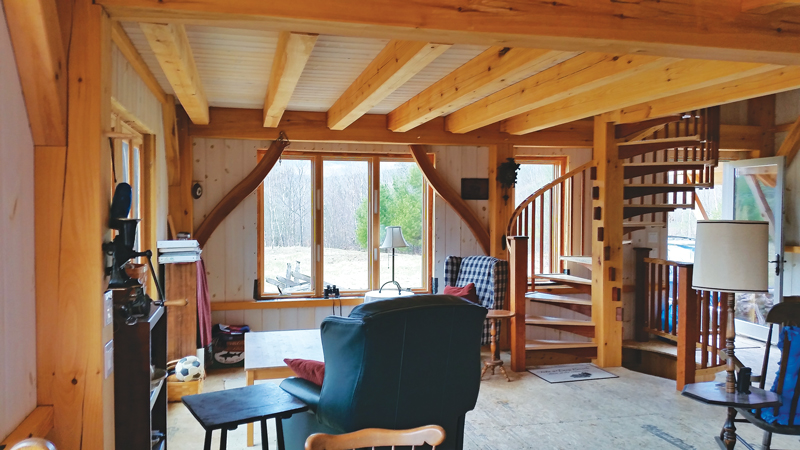 A spiral staircase with cherry risers and ash treads leads to a second story bedroom and a sleeping loft. 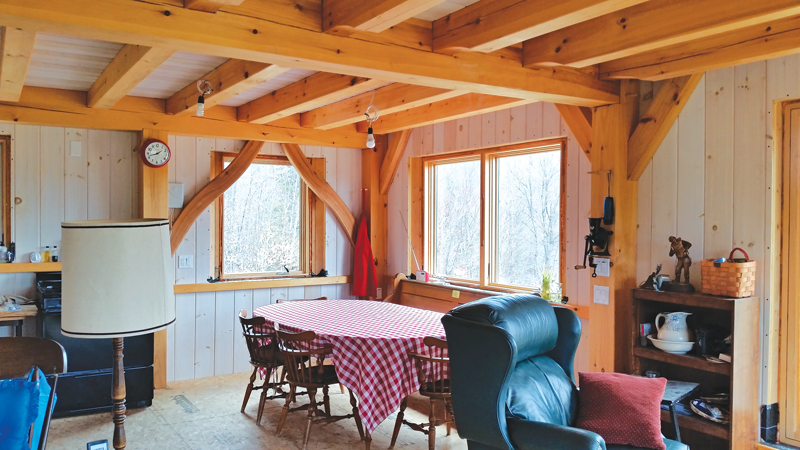 Exposed timbers add interest to the cabin interior.
“You can paddle a good mile and not see any human development,” he says. A good steward of the land, Andrews is a longtime volunteer for the Society for the Protection of New Hampshire Forests. To mark the nonprofit organization’s 100th anniversary in 2001, he donated a conservation easement on 250 acres on the southern portion of his land. “The rest of it will be placed under easement eventually,” he says. 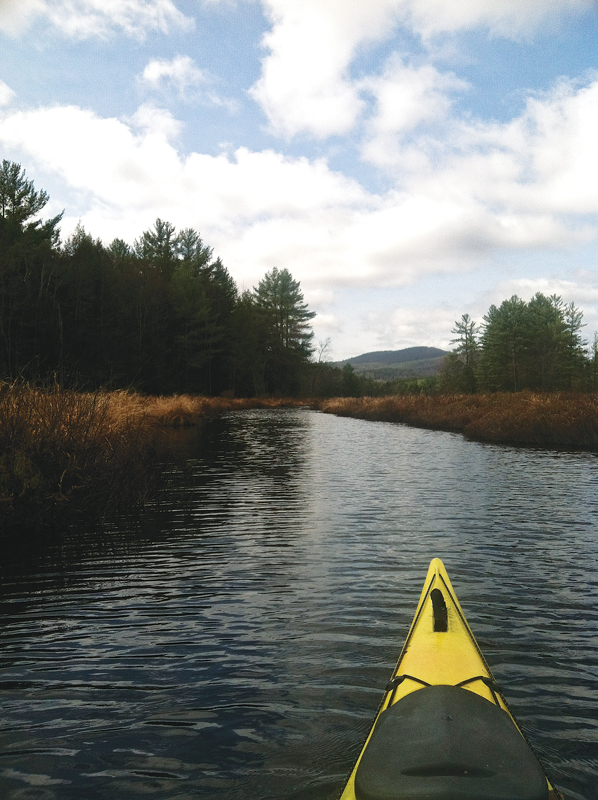 “Piloting” a kayak is one of Andrews’ favorite activities. n Andrews installed 400 feet of radiant heat piping under the slab of the full walkout basement.

Radiant floor heating is a great option for a new cabin, whether on or off grid. Radiant floors transfer heat directly to furniture (and feet) in a room via infrared radiation and continue to heat by convection as the warmed air rises. According to the DOE Energy Saver website, radiant floor heat is more efficient than either baseboard heating or forced air, since no heat is lost through ducts. It’s cleaner, too, because no allergens are circulated. Here’s how it works: heated water is pumped through PEX (cross-linked polyethylene) tubing under the floor. Typically, the tubes are laid in a concrete slab. Valves controlling the flow of water through loops of tubing let you adjust the temperature in different rooms or zones.

Radiant floors and solar thermal collectors couple well, says Andy Walker, principal engineer at the National Renewable Energy Laboratory in Golden, Colo. For starters, the temperature required for radiant floors is relatively low (85-130°F) compared to that for other heating systems (130-160°F). “By accommodating a lower incoming water temperature, the radiant floor allows the solar collector to operate at a lower temperature and higher efficiency and to deliver heat under colder and cloudier conditions,” says Walker. Tubes in the four collectors at this cabin are filled with nontoxic propylene glycol antifreeze that heats up when exposed to the sun. The heat is then transferred to a 120-gallon dual heat exchanger hot water tank. Andrews wanted to keep the cabin from freezing in winter and hopefully maintain an average low temperature of 50 degrees. A unique radiant floor he saw years earlier while taking a class in renewable energy served as inspiration. That floor stored heat in a sand bed below a concrete slab. Similarly, Andrews buried 400 feet of piping in two feet of sand underneath a slab in the cabin’s basement. The sand bed is surrounded by 4 inches of rigid foam insulation. “This is fed by the solar thermal year round to store heat,” says Andrews. “Storage is essential to bridge the gap between day and night and sunny periods to stormy periods,” notes Walker. “There is a tremendous amount of mass to act as thermal storage in the ground under the slab. It’s not feasible to create that much heat storage by other means such as a large water tank. The floor slab and ground under it are there anyway, so it is a less expensive way to construct the storage needed.” The Radiant Floor Company of Barton, Vt., supplied tubing and other materials. “This last winter, a neighbor said it got to 30 below outside, and the coldest my thermostat read was 43, so it’s doing what it was designed for,” Andrews notes with satisfaction. FOR MORE INFO: energy.gov/energysaver/radiant-heating
★