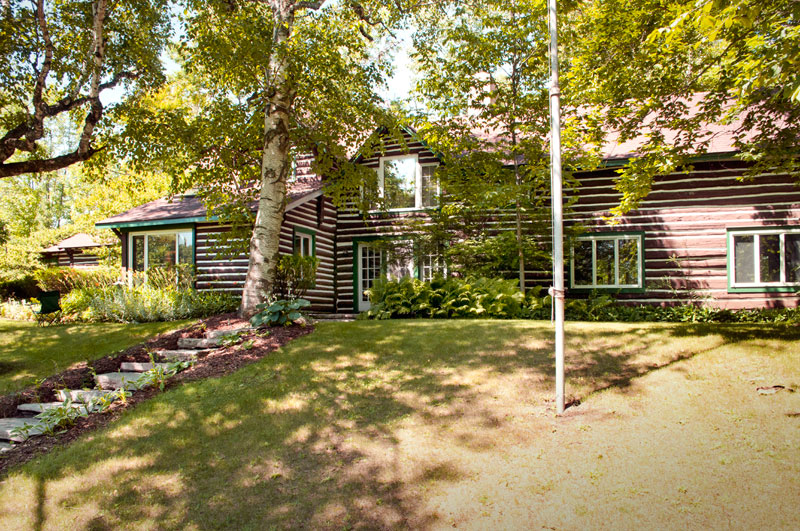 Story by Kristin Sutter
Photos by Sanderson Photography, Inc
Cruising along a treelined highway just outside one of the cozy villages that draws thousands of tourists to Wisconsin’s Door County 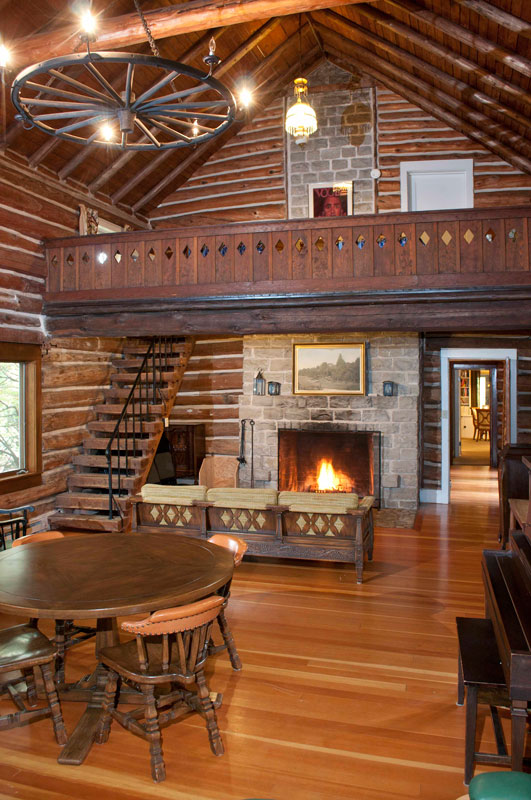 every year, it’d be easy to miss the common driveway leading to a cabin that’s anything but. However, teacher, librarian and art lover Miriam Erickson clearly has a good eye. On her way to work one day in 1966, she spotted a “For Sale” sign. “Oh, Howard!” she said to her husband. “Let’s go look at it!” They did, and the rest is history. A lot of history, actually.

Using logs reclaimed from two local barns, local craftsmen worked from 1925 to 1927 to build the German-style cabin on the picturesque peninsula that makes up the “thumb” of mitten-shaped Wisconsin. The original owner of the cabin, Elizabeth Bass, was a political activist and friends with Franklin D. Roosevelt. After the Bass family lost the cabin during the Depression, it sat vacant for 10 years. Then, in 1938, it became the vacation home of American composer Edward Collins and his wife, Frieda Mayer, daughter of Oscar Mayer, the well-known meat-packing baron. By the time the Ericksons bought the log home in the late 1960s, it had been shuttered for 14 years. Just a few rooms into a recent tour of the cabin, it’s clear that the 87-year-old getaway is rich in not just history, but also craftsmanship.

The beautiful woodwork and floors, three fireplaces, original bathroom fixtures, and a family-favorite quirk – the surprisingly steep stairs leading to the second floor – have all been beautifully maintained. 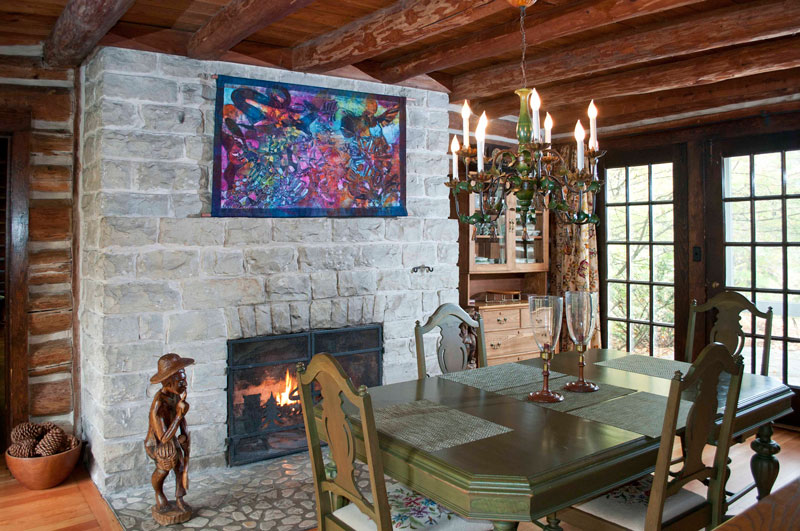 The family has learned a lot about upkeep for a log getaway too. To read some of their tips, check out “Log cabin maintenance tips from the trenches,” on the facing page. The first major improvement made to the log home: Frieda Mayer designed a stone studio on the property for Collins, so he could escape there to write music. 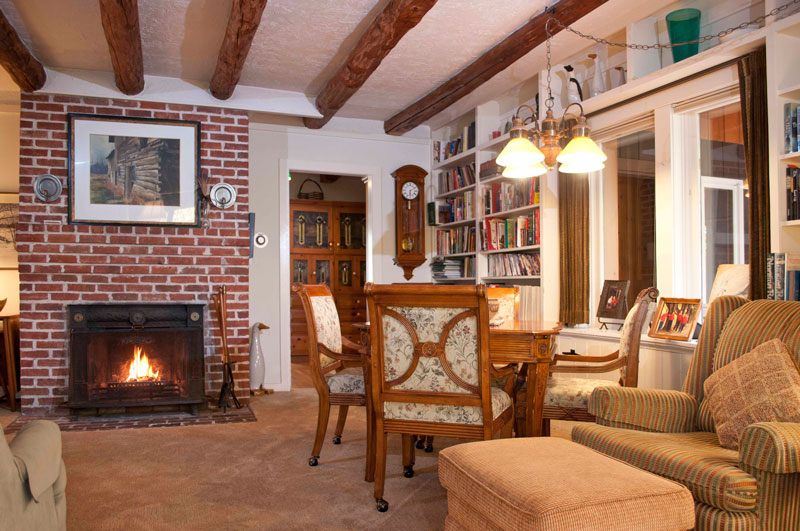 Constructed of reclaimed stone from a fence that used to border the highway, the studio’s double walls have air space between. Inside 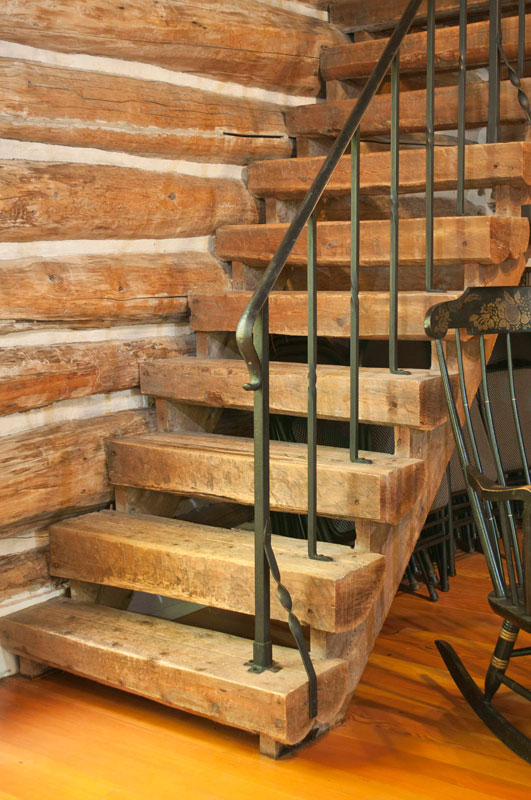 the studio, a peeled-timber ceiling complements gorgeous wood floors (just redone recently), and the personalized fireplace screen features a treble and bass clef for the composer. The Ericksons made just one addition to the cabin: a sunroom/breakfast nook located right off the kitchen. Surrounded on two sides by floor-to-ceiling windows, this space quickly became well-used and loved. The Ericksons worked with an architect to design the space to blend with the cabin’s original construction and feel. Thanks to the well-integrated addition, the entire log home is somehow simultaneously cozy and spacious, intimate, and comfortable enough for a crowd. Just as it has always been. Because of those qualities, the getaway has been, and still is, a go-to spot for gatherings, no matter whose name is on the mailbox. Elizabeth Bass gave political speeches there. Edward Collins had a full orchestra perform on the lawn. And the Ericksons may have topped them all.

“This room will hold about 60 people seated,” says Miriam, whose husband is now deceased. Her voice is echoing slightly in the great room of the cabin that has welcomed her family and countless friends, community members and summer vacationers for decades. Miriam’s son-in-law, Bob Dickson, estimates the ceilings in the great room are about 30 feet high – plenty of headroom for the bands that have set up there for weddings, annual Christmas celebrations, even an infamous Sweet 16 party. 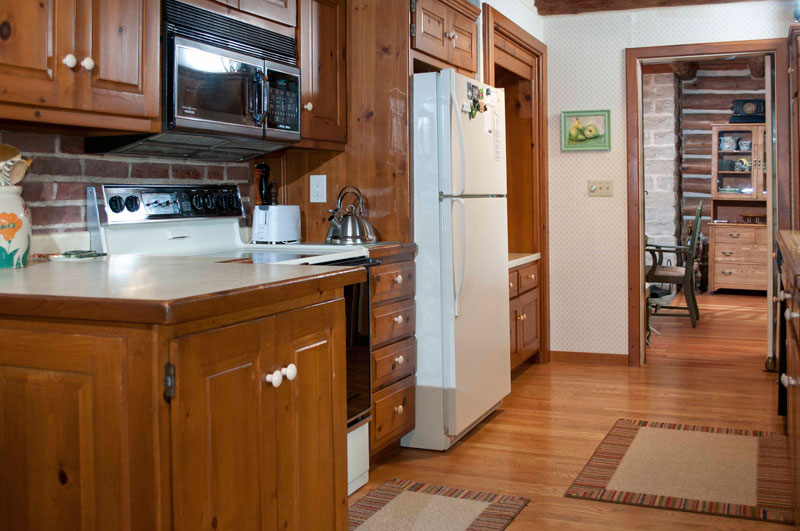 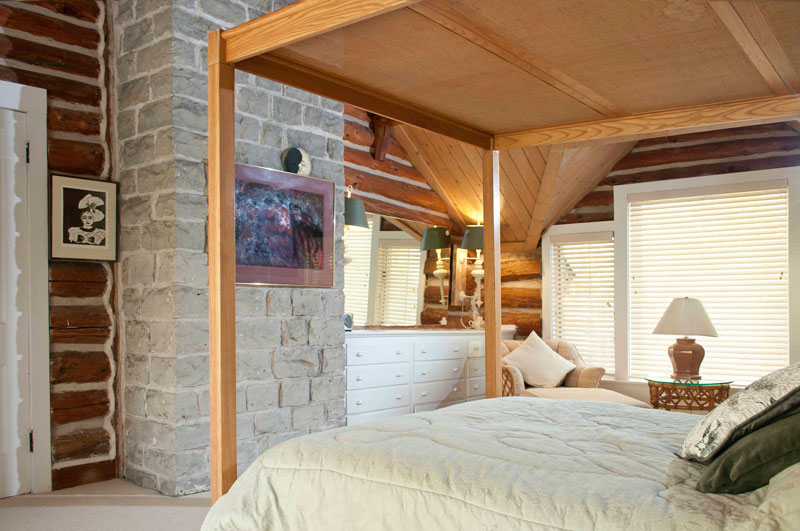 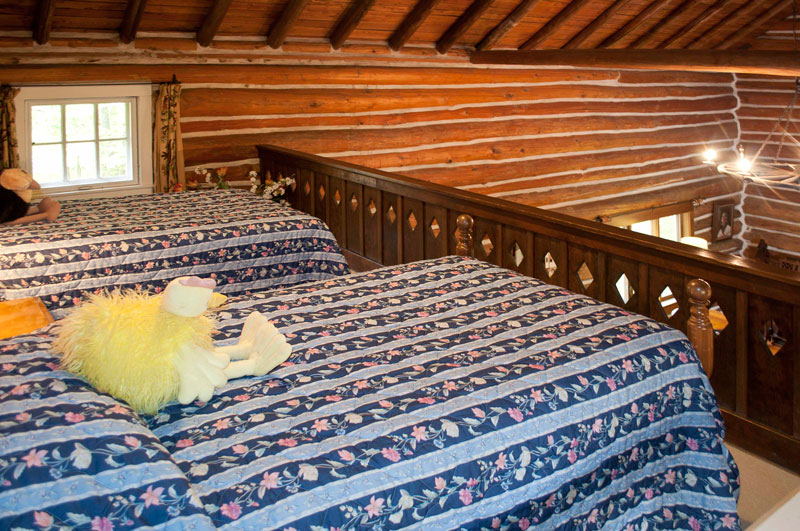 “Kids went in and out of windows,” says Miriam, nodding toward the tall windows on the great room’s main floor. “Thank goodness they never jumped off the balcony!” 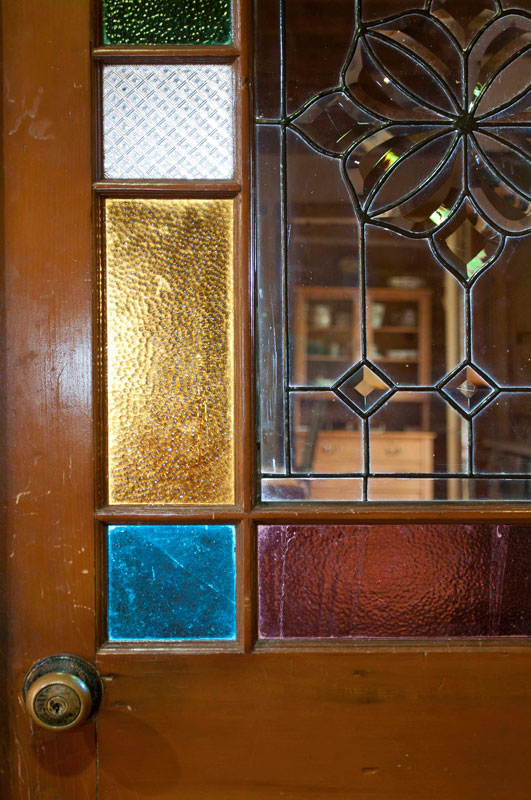 Get-togethers are Miriam’s favorite thing about the cabin. Four of her five daughters have been married there, and everyone suspects the fifth may someday follow suit. “My oldest sister started the tradition in the early 70s,” says Liz Dickson, who married Bob there in 1979. “It took the pressure and nerves away because you were right at home. It was really special.” Saying “I do” outdoors was an obvious choice for the sisters. The cabin is surrounded by 17 wooded acres, and the picturesque grounds were designed by landscape architect Jens Jensen, a major influence in bringing the return of native gardens to the Midwest. It’s a family tradition to celebrate holidays at the cabin, too. For Thanksgiving, they set up one long table for 30 in the great room and keep a fire roaring in the room’s original fireplace, which features floor-to-ceiling stonework. Turkey day also means an annual game of touch football in the yard. When the weather turns even colder, Miriam’s beloved Santa collection comes out and Christmas trees are decorated in nearly every room. Growing up, Liz says, annual Christmas parties often included local groups singing carols. And Miriam remembers hosting members of their church for Christmas brunch. “The minister could never tell us how many were coming,” she says. Luckily, guests could spill out of the great room and mingle in the ample dining room, low-ceilinged living room, or the sunroom/breakfast nook. Miriam and her family recently hosted a friend’s anniversary party at their cabin. And another family that’s been visiting for 20 summers will soon celebrate their 50th anniversary at the cabin. The whole family is invited to stay. The whole family: That’s just what a cabin is for. 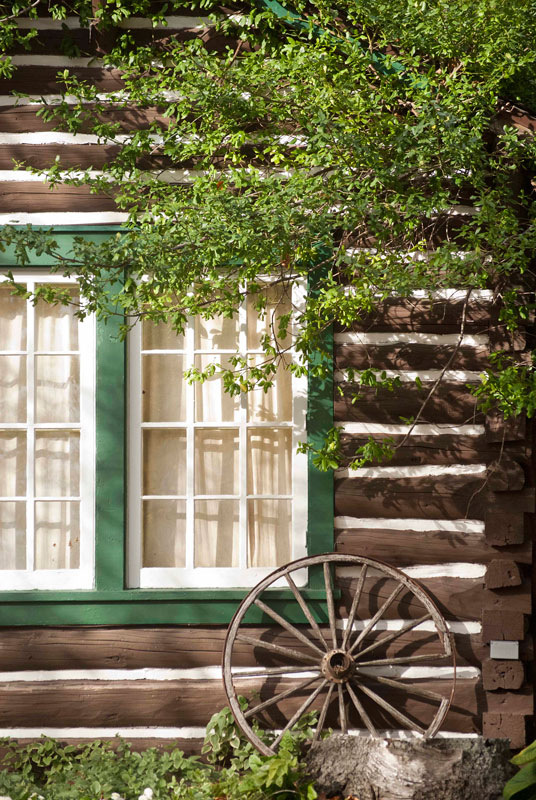 Anyone who enjoys the log construction of their beloved getaway knows the ambiance comes with a set of considerations unbeknownst to the standard 2x4-and-drywall crowd. Bob Dickson’s been helping his family keep up their German log cabin for more than a decade. Here are some of his tips on how to get the job done right. 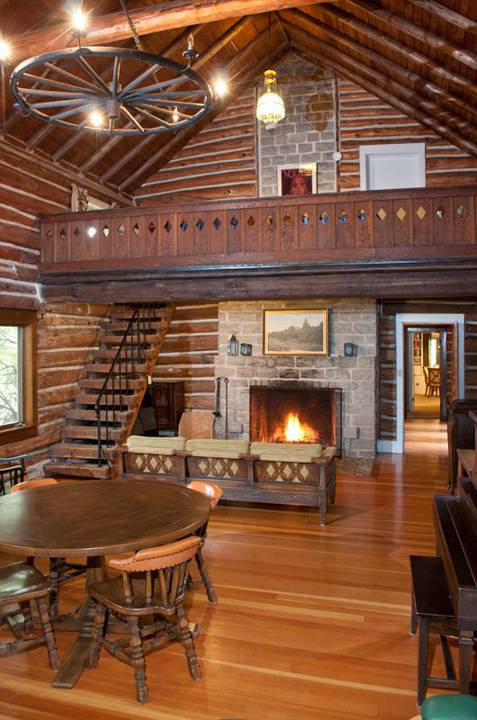 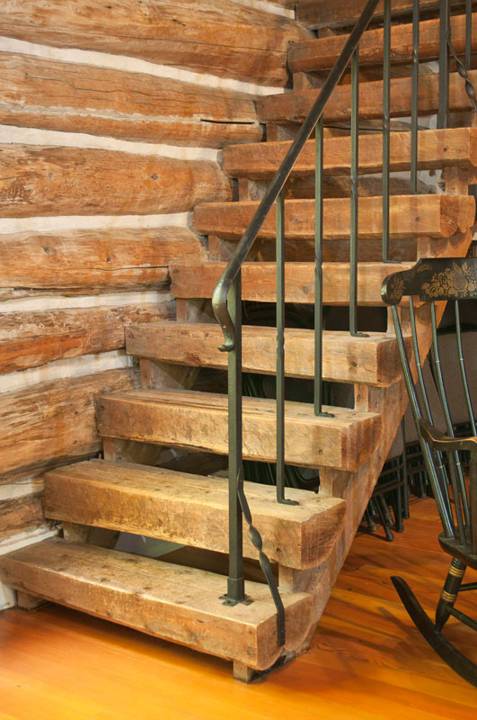 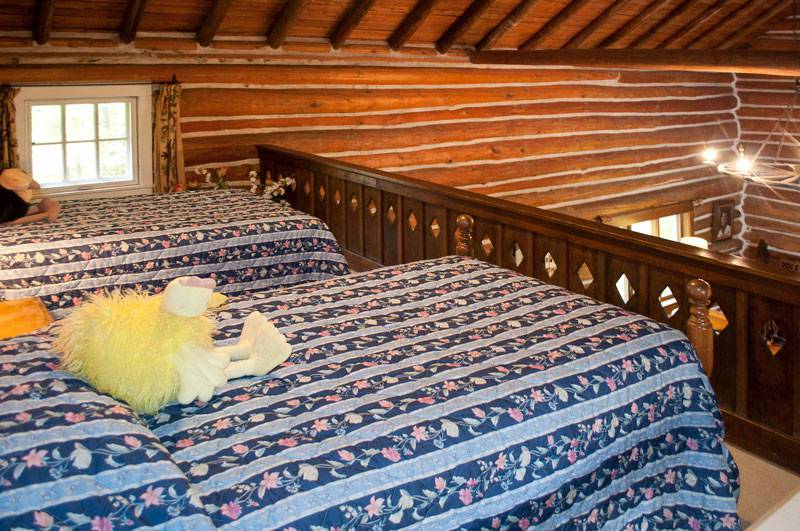 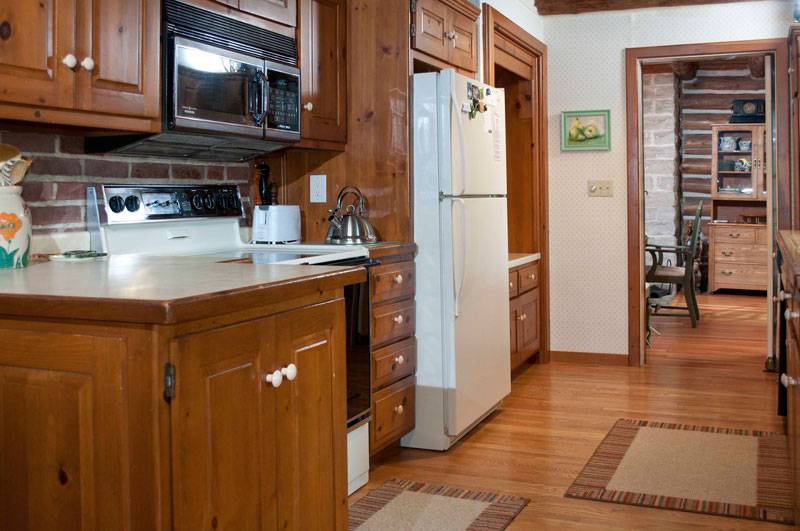 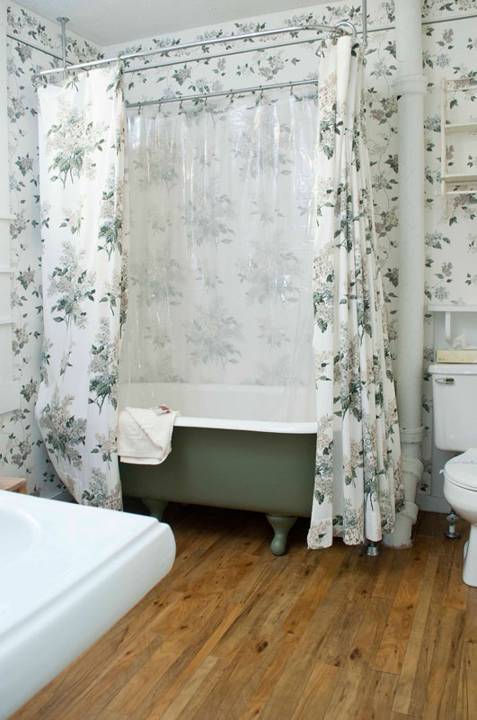 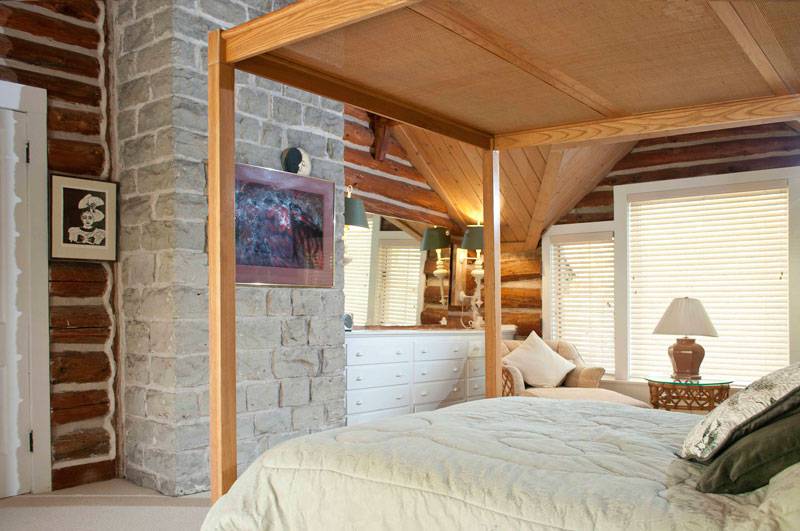 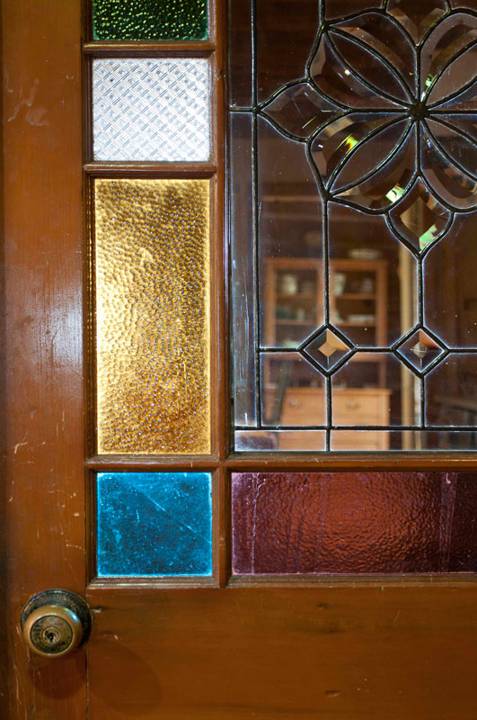 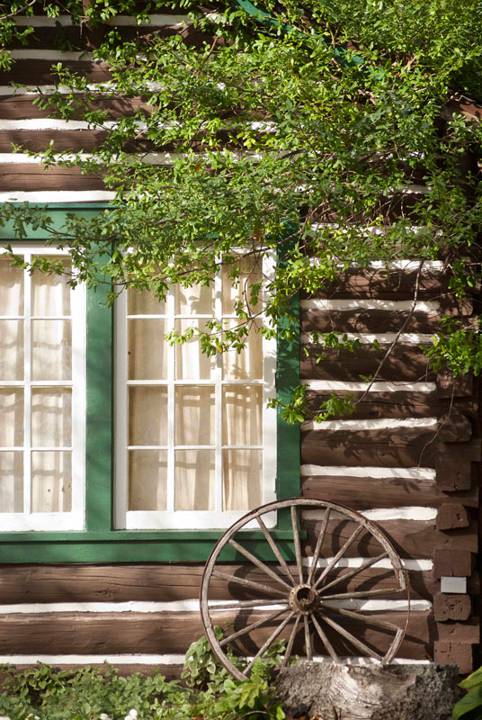 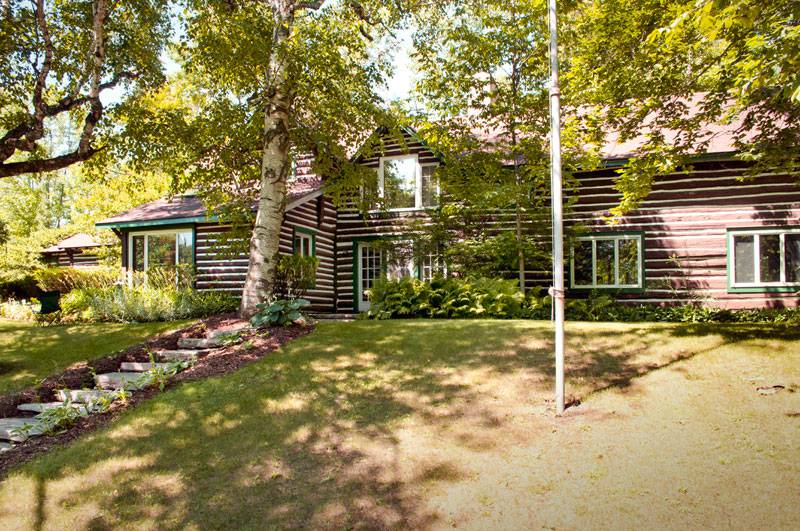 Previous Next
Kristin Sutter is convinced that there have been epic games of hide-and-seek at this cabin. It has inspired her to strike up a round or two the next time she’s with her nieces and nephews.
★