This beloved retreat was a family project from start to finish. ON A STEEP SLOPE – How is this cabin designed so it can perch on this steep slope? An extra thick concrete retaining wall was built up behind the house. And tiebacks running from the deck posts to the foundation prevent the posts from sliding/tilting.

SLEEK & SLENDER – In keeping with the cabin’s architecture, the slender structural tension rods are elegant and light. A simple cable lighting system complements the metalwork. 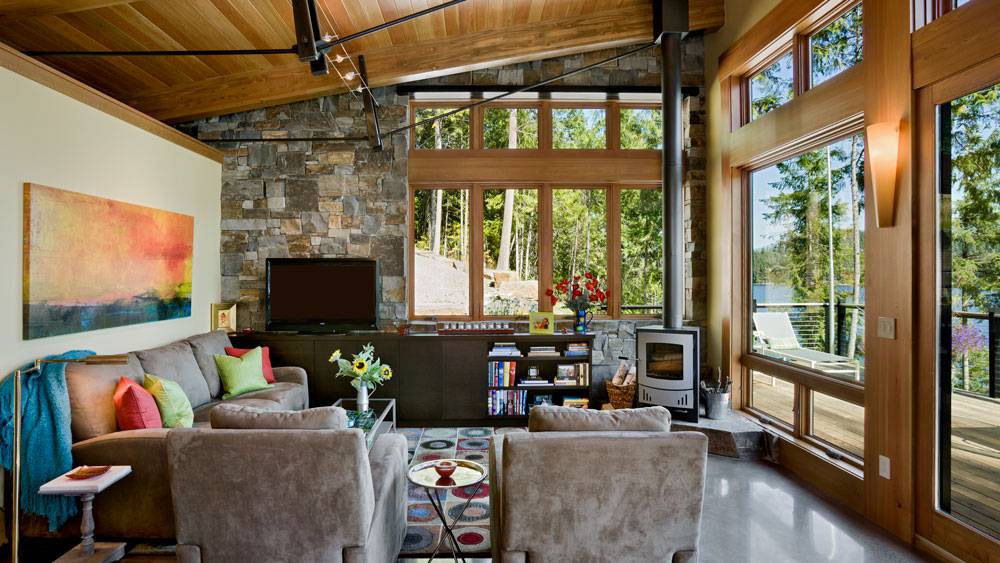 WINDOW DESIGN –  Clerestory windows lead the eye up and out to views of the tree canopy. They also open to aid
with ventilation.

EXPANDING THE LIVING SPACE – The Smiths’ cabin lives beyond its 1,100 square feet due to the easy flow between the indoor living area and deck.

SLEEPING IN – With a view like this, it might be hard to get out of bed in the morning! Note: The stone walls in the cabin are made from Chief Cliff natural stone veneers from Kalispell, Mont. TALL TASK – Designing a cabin for a steep lot full of mature trees 30-feet above the lake is a tall task. To tackle the feat, the property owners turned to their architect and son, Reid Smith. 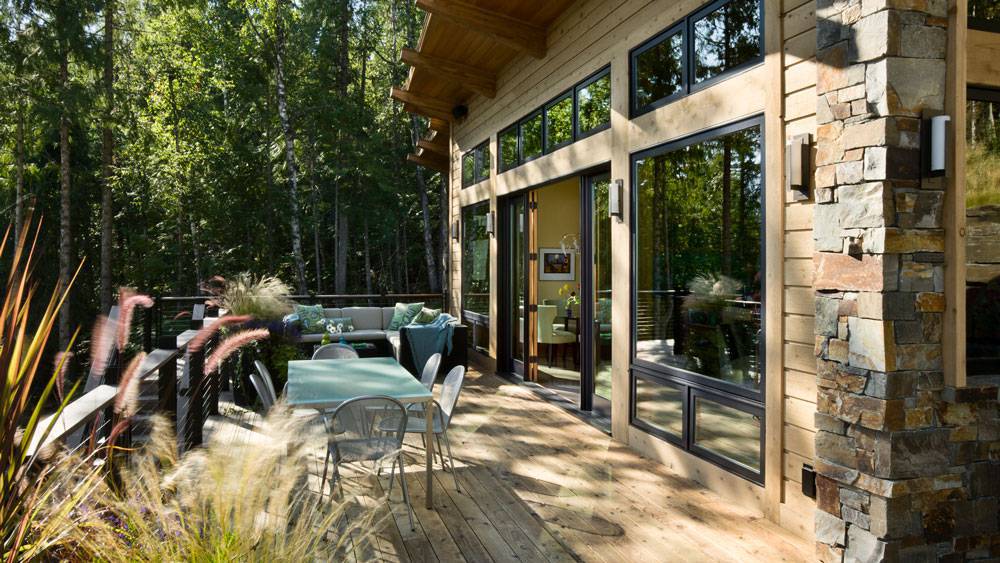 AMONG THE TREES, ABOVE THE LAKE – Cabin owner Linda Smith envisioned a home floating above it all in a modern
glass tree house. Vision accomplished! ON A STEEP SLOPE – How is this cabin designed so it can perch on this steep slope? An extra thick concrete retaining wall was built up behind the house. And tiebacks running from the deck posts to the foundation prevent the posts from sliding/tilting.

Written by Mindy Pantiel
Photography by Roger Wade
Styling by Debra Grahl
If Mike and Linda Smith had a theme song, it would likely be “On the Road Again.” As reps for several women’s clothing lines, the couple logs hundreds of miles every year, crisscrossing a territory that includes Western states like Colorado, Wyoming and their home base, Montana.
“We could have lived anywhere, but we both liked Bozeman,” says Linda. She and Mike decided a few years back they needed an off-the-beaten-trail retreat where they could kick back and really leave the road behind.
The Smiths were already familiar with Swan Lake, a semi-remote locale an hour’s drive from Glacier National Park.“We’ d visited with friends who owned waterfront property there,” says Mike. “It’s a small, pristine body of water surrounded in part by national and state forest land, so there’s a limit to the number of residences that can be built there, which we saw as a real plus,” he adds. So the Smiths soon found themselves searching for a lakeside lot.
When a steep site flanked by mature trees with 200 feet of shoreline came on the market, they did not hesitate. “The property was totally private with incredible views of the water and the mountains,” says Linda. “It was just perfect for our needs.” 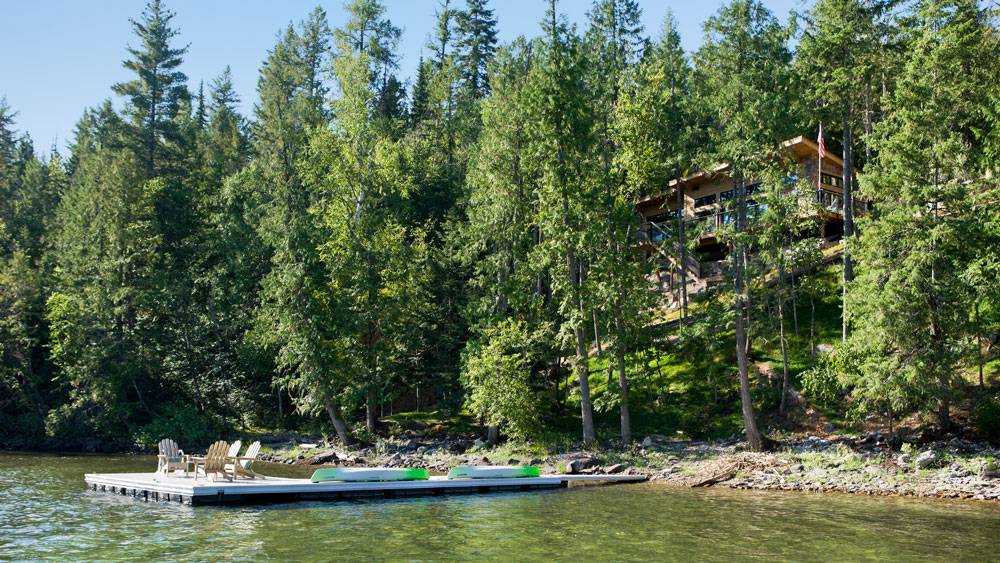 Purchasing the land turned out to be the easy part. The Smiths quickly discovered that building a structure on the acre lot that included a 30-foot drop from the top to the lake would not be simple. To tackle the challenge, they enlisted their architect and son, Reid Smith.
He soon determined the site would definitely dictate the design. “In order to maintain the privacy and views, we needed to place the house high up and hunker it into the hillside,” says Reid, who believed a contemporary structure with clean lines was the only way to go to establish optimal view corridors. “Traditional cabins tend to be introverted, so I pushed early on not to go rustic, but my parents were a little apprehensive at first.” 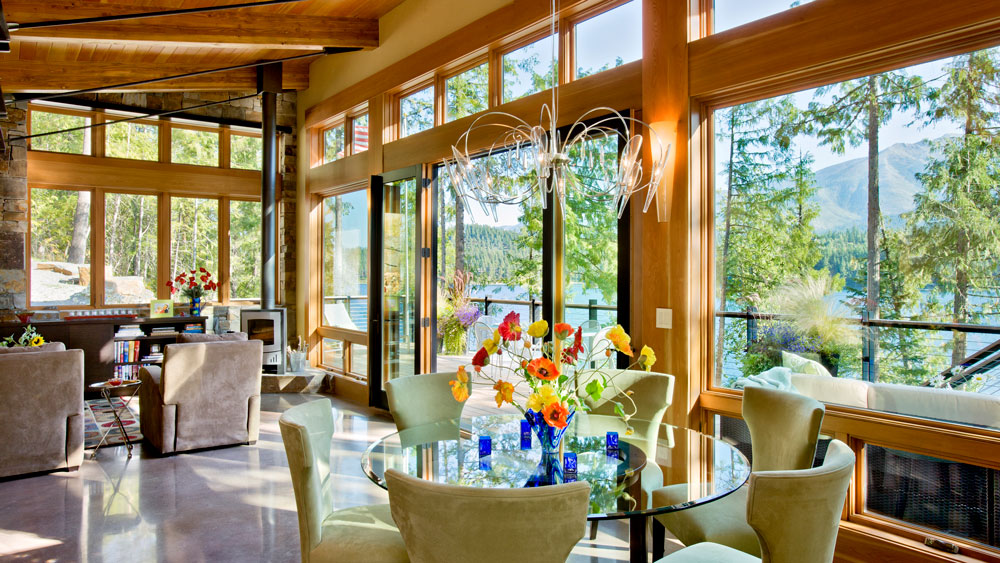 For Mike, who grew up in southern California, it was hard to let go of the idea of a little cabin in the woods. “From a conceptual standpoint, I envisioned something more rustic,” he admits.

But Linda – whose childhood in Minnesota included annual summer forays to the primitive family cabin and swimming in Lake Superior – loved the idea of floating above it all in a modern glass tree house. “My parents and grandparents had these really spare cabins with outhouses and no electricity.
I have lots of wonderful memories from that time, but I was happy to go with something more contemporary and convenient for our retreat,” she says. 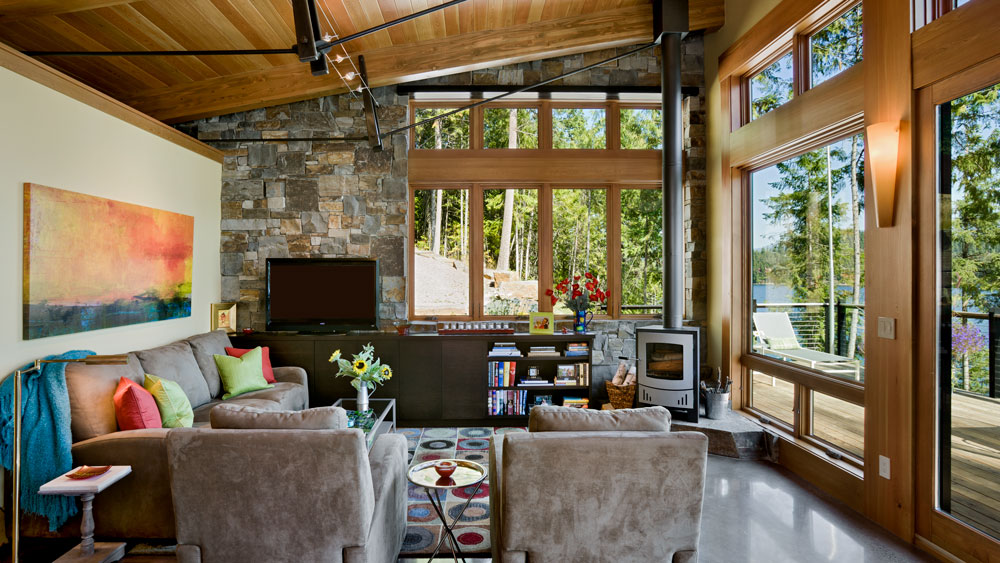 With a little nudging, Mike concurred, and Reid got on with creating a simple and utilitarian form crafted from local Chief Cliff ledge stone, rough-sawn cedar-lap siding, and a rusted Cor-Ten steel roof. “Upon approach, the house isn’t very exciting, but when you get farther in and see how the building pushes out and up toward the lake, it’s very dramatic,” says Reid, who extended the interior timber frame rafters outside for additional effect.
A carefully conceived deck both expands the living space and continues the contemporary theme. “We used a minimalist steel railing to complement the architecture without impeding the panorama,” he adds. 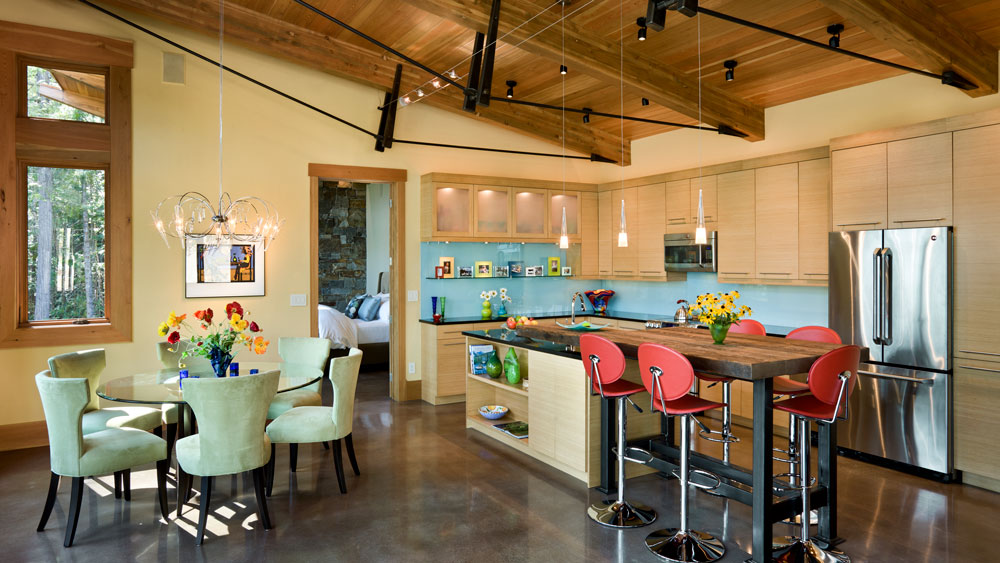 Inside, the 1,100 square feet lives large thanks to ceiling heights that go from 9 feet in the kitchen to a soaring 12 feet in the main living area. The ascending fir ceiling tops stone walls that bookend the space, and durable concrete floors handle wet flip-flops and snowy boots with equal ease.
At the center, a bank of windows wraps around to meet the stone on either side with the biggest expanse of glass placed front and center to frame up the mountain and lake tableau. “The largest pane is at eye level and there are smaller units above and below for ventilation,” says Reid. “And because the house is built into the hillside, the cool earth provides air conditioning.”
With such a simple material palette outside, Mike and Linda opted for a similar approach indoors. But simple doesn’t have to be boring. “It’s not very fancy, but we wanted it to be fun so we added lots of color,” says Linda, noting many of their selections were in direct response to the surrounding environment. “We chose those lime green dining room chairs because we see that color outside, and the painted turquoise backsplash in the kitchen references the lake. The orange bar stools are just for fun.”
Also in the kitchen, bamboo cabinets provide a quiet backdrop, and to prevent the double-height island from going too sleek, Reid mixed black granite on one end with a raised slab of reclaimed wood on the other. “I thought using an old bar top for one section made it more casual and approachable,” he says. “This is Montana after all.”
Reid collaborated with his mother on the suspended cable lighting system that provides a glow when the sun goes down.
“We didn’t want recessed cans because it’s not very energy efficient to punch holes in the ceiling,” he says. “This was a way to create good, adaptable lighting that fits with the architecture.”
In the master bedroom, soothing blues and browns mimic the hues in the stacked stone wall.
And, like the adjacent living room, the sleeping quarters enjoy spectacular vistas. “We can have snow until mid-July and can actually see the glacier from our bed,” says Linda, also noting that wildlife sitings are a regular phenomenon in their neck of the woods. “We’ve observed a bald eagle migration and have even seen a moose swimming across the lake.”

In such tight quarters, storage is always at a premium. So in lieu of space-hogging doors and closets, Reid introduced built-ins, made of bamboo, in the master bathroom. “It’s so much easier to pack and repack with this kind of storage setup,” he says.
No strangers to living out of a suitcase, Mike and Linda appreciate those little amenities on their ever-increasing visits to Swan Lake. “We’ve started coming here in every season, but summer is still the big draw,” says Mike. “We just wish the summer months were longer.” 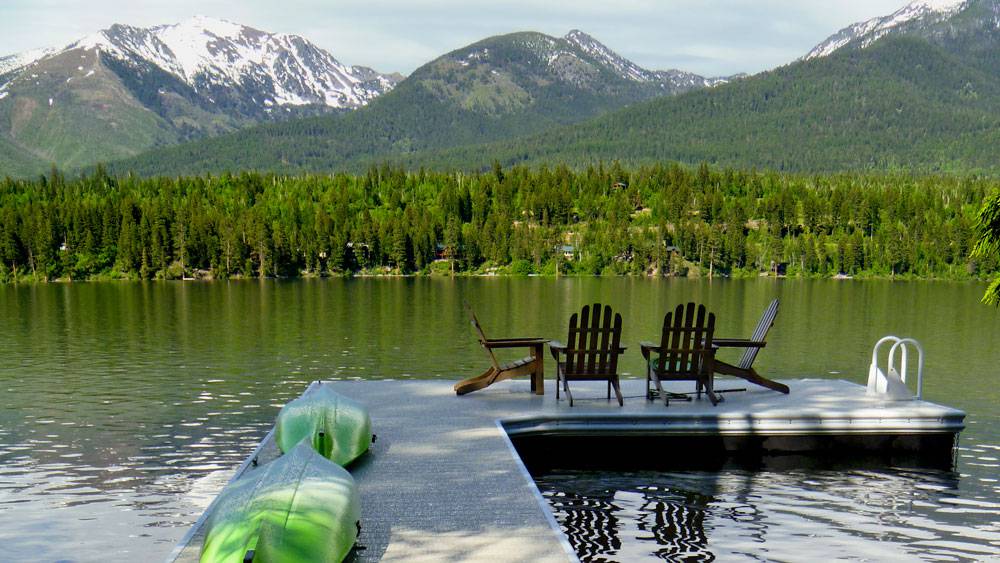 What Montana lacks for a growing season, it makes up for in summer days that seem to last forever. “It’s not unusual for us to be on the lake until 10 o’ clock at night,” says Linda, who says a typical day starts with a morning hike or bike ride. “There’s a southerly breeze in the morning so the lake isn’t always smooth, but by mid-afternoon it’s perfect for kayaking.”
The Smiths have two grown sons, so when the kids and grandkids come to visit, there’s a king-size pullout in the living room for those who like cushier accommodations, and a flat soft grass spot outside for those who prefer to pitch a tent and rough it. “Our granddaughters (ages 3 and 8) love to camp, but everyone comes back here for meals,” says Linda. “We enjoy lots of breakfast parties on the deck, and the dock is another living area too.”
Come evening, everyone heads down to the lake and boards the Smiths’ 21-foot Sea Ray. Most nights they meet up with neighbors and tie their boats together. “Then we have cocktails and float for hours,” says Linda. Mike adds, “The sunsets are magnificent.”
If there’s one time everyone in the Smith clan can agree upon for a family gathering, it’s the Fourth of July. According to Mike, that’s when one of their neighbors puts on a firework display that beats the city of Bozeman’s show by a mile. “It’s something we all look forward to, and there are somewhere between 75 and 100 boats out for the celebration,” he says. “A full moon and fireworks on the water. It doesn’t get much better than that.”

A tributary of the Swan River located east of Flathead Lake and the town of Bigfork, Mont., Swan Lake began as a community of loggers cutting timber for lumber and the railroad ties to build the Great Northern Railway in the late 1800s.

Where did Swan Lake get its name? Some say what is now a recreation/wilderness area was named for the trumpeter swans that once populated the lake. Others say that it was named after early resident Emmett Swan.
Size: 3,269 acres
Elevation: 3,198 feet