A Northern Michigan Retreat Gets a Fresh Look - And More Space

A Northern Michigan Retreat Gets a Fresh Look - And More Space

Jim Fergus has never missed a summer at the cabin in all of his 57 years, and he’s doing his best to ensure the continuation of his perfect streak. 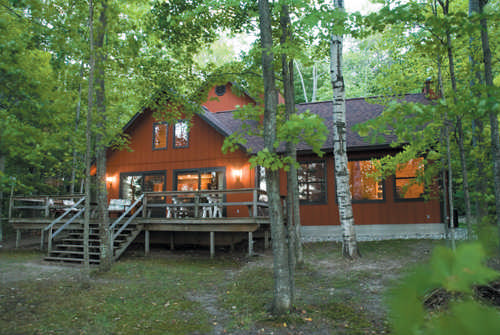 Jim and Cheryl Fergus renovated their place to accommodate grandchildren and their own eventual retirement.
Jim Fergus has never missed a summer at the cabin in all of his 57 years, and he’s doing his best to ensure the continuation of his perfect streak. During those 57 summers, Jim has transitioned from creating childhood cabin memories; to purchasing his place; to renovating his getaway; to dreaming of retiring to the cabin. Throughout his childhood – and into adulthood – Jim vacationed at his parents’ northern Michigan log cabin, located 40 miles southeast of the Mackinac Bridge. Then in 1994, he and his wife Cheryl – who live in Powell, Ohio – acquired their own retreat: a 13-year-old, 1,250-square-foot, chalet-type, lake cabin with two bedrooms, a kitchen, a great room and a loft. The vacation home is located just a mile from Jim’s childhood cabin and is situated on a 3-acre lot with 100 feet of lake frontage. Nestled between majestic red pines, fragrant spruce and ornamental birch trees, the couple christened the cabin the Paul Revere House. The name was chosen because there is one outside light on the land side of the cabin and two on the lake side (“one if by land, two if by sea”). Through the years, cabin life has been perfect – so perfect, in fact, that upon retirement Jim, an executive vice president for a national bank, and Cheryl, a registered nurse, plan to spend nine months of the year at their Michigan haven. So, in 2004, they decided to make their haven a little more like heaven by remodeling the existing space as well as adding 1,750 square feet onto the existing structure. 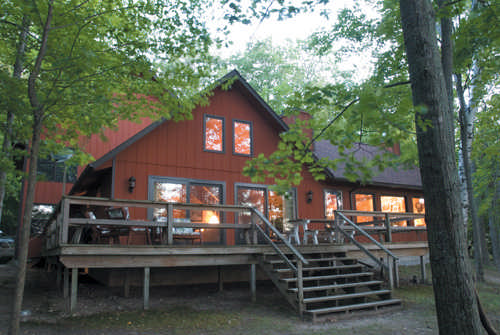 Thanks to a lot of planning and research and hiring a good contractor based on strong recommendations, the Fergus’ renovation turned out even better than they anticipated.
Planning Ahead Well before they broke ground on their renovation, the Ferguses attended home shows, talked to friends who had recently remodeled and created a wish list of features they’d like to include in the renovation. Cheryl, for instance, wanted a large craft room with enough space for her sewing materials and equipment, including a 4 x 7-foot rolling island, which can be moved around the room as needed. Jim, meanwhile, envisioned a spacious home office where he could catch up on paperwork in comfort. They also wished to expand the master bedroom and bathroom, and add a water heater with a greater tank capacity. After roughing out their ideas on paper, they hired a trusted contractor who was recommended to them by a family member. Selected was Jan Bruin-Slot, a seasoned contractor with over 30 years of experience – known to be knowledgeable and trustworthy, with a proven track record of quality craftsmanship. 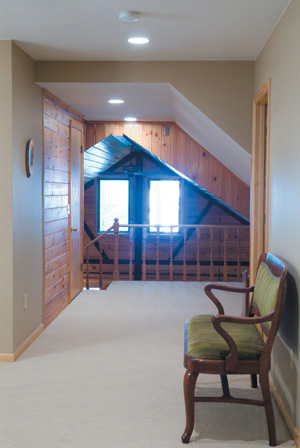 The cabin’s loft is designed so it can easily be transformed from one large open area into two bedrooms.
“Given that we would be managing this process from 450 miles away in our Ohio home, we needed to have someone onsite whom we could trust and who was totally committed to doing quality work,” says Jim. “Jan made sure that things we didn’t even think of were handled.” For example, in the exterior walls Bruin-Slot used 2 x 6s for studs (rather than 2 x 4s) so he could add extra insulation in the deeper walls. For safety reasons Jan also suggested adding a back staircase and widening both the stairs and the hallway to four feet. A Lofty Change Prior to renovation, the loft’s ceiling reached only 7 1/2 feet before sloping even lower to either side of the house. Given the low ceiling height, the spaces at the edge of the loft were essentially unusable except for storage. Though the room served as a cozy bedroom for Jim and Cheryl’s two daughters, it wasn’t very functional. When redesigning the loft, the Ferguses planned for the possibility of future grandchildren. During renovation, they raised the entire ceiling to a uniform 8 feet, widened the room by 8 feet, and lengthened it by 17 feet. A good portion of the upstairs was left open so that as the family grew the area’s use could be altered. One section was designed so that it could be easily transformed from a large open area into two 10 x 11 1/2-foot bedrooms, each with its own closet and ceiling fan. The outside wall was reinforced to permit these potential changes, and electric lines were left in the attic that eventually could be dropped down into the new walls. Cherished upgrades to the master suite include a large, cedar-lined closet; a multi-head, 52 x 52-inch shower; and a luxurious, two-person, air-jet hot tub. Not all of the Ferguses’ design choices were future-oriented. In fact, many were driven by daily cabin activities. For instance, the family spends a ton of time swimming, sunning, skiing, boating and barbequing. Because they enter and exit the cabin dozens of times a day, they chose a carpet color that closely matched the speckled sand that is so easily tracked indoors. The Family's Favorite Room The Ferguses’ pride and joy is the addition of the 17 x 23-foot family room with a ceiling that rises to 12 feet in the center. All of the wood in the room – flat boards on the ceiling, tongue-and-groove paneling, fireplace beams and mantle – is knotty pine, which Bruin-Slot transported from Michigan’s Upper Peninsula. 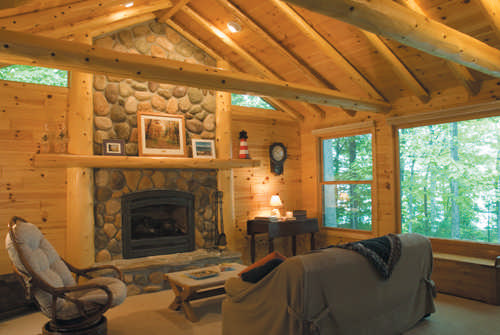 The Fergus’ favorite room is their 17 x 23-foot family room. The ample fireplace can take the chill off a Michigan winter night.
For nostalgic reasons, Jim wanted to replicate the interior roof design of his childhood cabin with a flat-board ceiling, beams along the ceiling and support beams across the room. Nostalgia aside, Jim did make some structural and practical improvements. In his childhood cottage, the outside roof was the inside ceiling, but when the Paul Revere House was renovated they created an insulated attic between the inside ceiling and outside roof. In addition, in the large cross beams that handsomely stretch across the room, rope lighting is concealed in a half-inch trough that is routed into the top of the beam. When turned on, this softly illuminates the ceiling without being seen from below. The Ferguses also wanted to invite plenty of natural light into the family room. “We chose triangular windows at the top of the manufactured stone fireplace to bring in some light from the setting sun but none [of the windows were placed] lower to distract from the fireplace itself,” explains Jim. The higher windows also provide privacy. In fact, the couple thought carefully about window location throughout the cabin. To ensure a great view of the lake – as well as ample light on the lake (front) side – they chose a picture window with a large center and big double-hung windows on both sides that can be opened to allow in the fresh lake breeze. Those, coupled with smaller double-hung windows in the back of the home, allow for flow-through ventilation. The Perfect Retreat “The renovation turned out even better than we had anticipated,” Jim says. “We preserved a lot of the original Paul Revere House, included aspects of the cabin I grew up in and added a great deal of space and creature comforts.” And yes, that does include the craft room and office of which they dreamt. During lazy mornings, quiet evenings and all-day rainstorms, the Ferguses cozy up in their new digs to read books, play cards and games or simply gaze out at the gentle, rippling waves. With a place this inviting it’s safe to say that Jim’s 57-year cabin streak will continue. And he won’t be alone. “The great thing about the cabin is that family gravitates back here from all points no matter their age or stage of life,” reflects Jim. “The cabin is the glue that holds the family together.” Frequent contributor Christy Heitger believes that if everyone would build his or her dream cabin, the world would be a happier place. 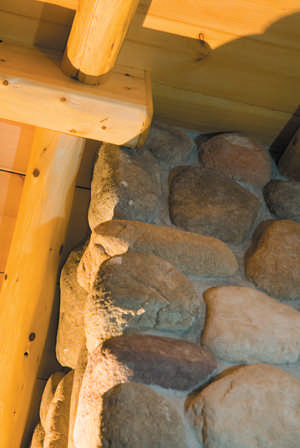 The craftsmanship is evident in the knotty pine ceiling and beams. 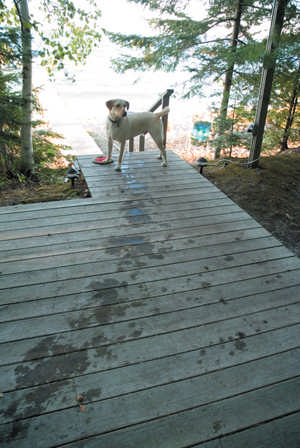 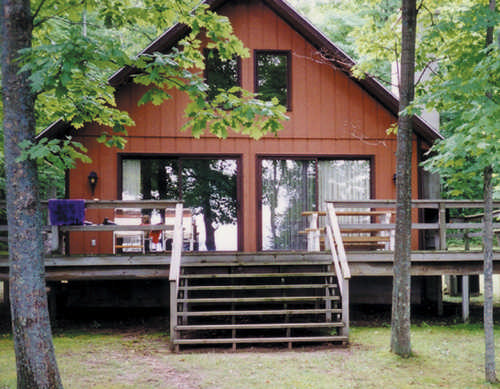 This before view showcases the original cabin with its single peak.
★