A Reclaimed Cabin in the Mountains

A Reclaimed Cabin in the Mountains

A cozy cabin uses reclaimed materials to flawlessly blend in with its mountainous surroundings. 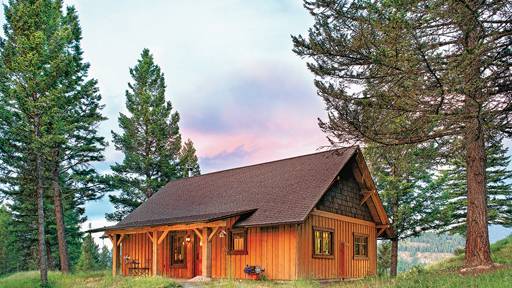 Photo Credit: Heidi Long
When Bill and Mikki Lukens planned vacations for their family, they had one requirement: “It had to be in the West, because we both love mountains,” Mikki says. Their attraction was so strong, they hoped to retire there.

Over the years, the Lukens and their three children spent time at Glacier National Park in northwestern Montana, but it wasn’t until they happened upon nearby Whitefish in 2004 that they found a place to build their future cabin.


“We fell in love with it because of the small-town atmosphere, and it reminded us of Lebanon, Ohio, where we had lived for 32 years,” Mikki says. “What made it more special was the scenery and all the outdoor activities. It had everything we were looking for.”
See also Road Trip Guide: Flathead Lake in Western Montana

Finding land to buy there took a little longer. After showing several plots to the Lukens, the real-estate agent brought the couple to a 12-acre parcel that had recently been taken off the market. Bill and Mikki were determined to buy it, as the acreage was surrounded by state and national forest, and featured a 150-foot cliff overlooking a three-acre lake and five mountains. They worked out a deal to purchase it from the owner in two years.

“We weren’t in any hurry,” Bill says. “We took the time to build what we wanted.”

During one of their property visits, the Lukens saw the work of Greg Lee, owner of Lee Building Company, who was constructing a home on an adjacent piece of land. “We got to see his workmanship,” Mikki says. “He is personable, very artistic and pays attention to detail. We really liked his style of building.”
See also Fire Restrictions: What Does a Fire Ban Mean?

The Lukens also choose a Montana-based architect in Ross Anderson. “He was very creative and paid attention to details, such as the location of the house and sun exposure,” Bill notes. “He was able to see our vision.”

That vision involved crafting a cabin that fit in with the environment, captured the picturesque views and looked as if it had been there for years. “They were looking for a fairly traditional Montana ranch with some elements of national park and lodge styles, such as steeply pitched roofs and exposed timbers,” Ross explains. “We wanted to keep the footprint small and then take the money saved from that simplicity and put a little care into the details and finishes of the cabin.”

The Lukens placed their trust in their builder as he constructed the cabin, taking only a handful of trips from Ohio to Montana during the process. “Greg and his crew would send us emails with pictures, and we talked on the phone,” says Bill, adding that the team built the doors, windows, cabinetry, interior woodwork and some furniture pieces out of the reclaimed oak and pine. “We weren’t directing them to do something. It was a great relief knowing we had this guy doing our job.”

It didn’t take long for Bill and Mikki to settle into their cozy, tightly constructed cabin, where they stayed during summers and on Christmas and spring breaks. “It’s pretty amazing when you only have a little more than 900 square feet,” Bill says, “because if you buy something, you’ve got to take something away. There’s only so much room. Everything is organized and in its place.”

Bill retired from his horse veterinary practice in December 2011, and Mikki resigned from her position as a nursing clinical instructor shortly thereafter. They moved into their cabin full time in July 2012.


The pair spends considerable time outdoors, whether it’s hiking or walking their three Labradors. But each time they return home, they’re reminded of why they built the cabin in the first place. As Mikki puts it, “You just go, ‘aaah’ and decompress. Every time we walk in that front door, it’s like, ‘This is where we belong.’”
See also Picking Paint Colors for Your Cabin

Tour the Reclaimed Cabin in the Mountains 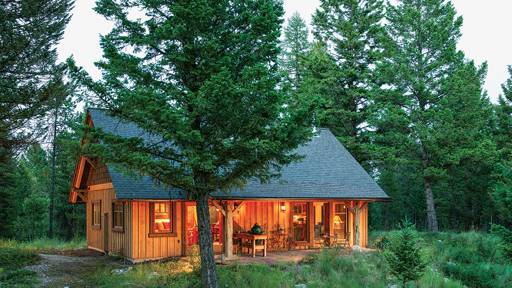 Thanks to its construction and placement on the land, the cabin appears as if it has always been amidst the trees — just as homeowners Mikki and Bill Lukens had hoped. The architect intentionally placed the home away from the driveway, with a walking path in between, to encourage anyone visiting the cabin to leave their troubles behind.

The front door features deep grooves, holes from square nails and general wear typical of wood reclaimed from a 150-year-old building. “We went with more door than window here to create that cabin look,” Bill says. A kilim rug softens the floor. 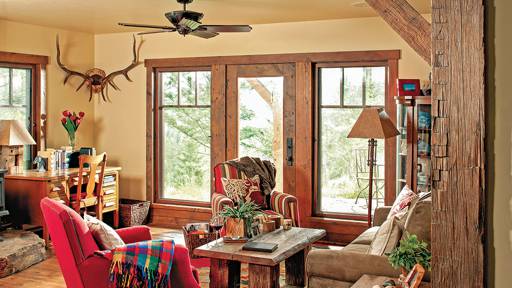 Bill built the office desk out of the antique barn wood. New wire-brushed fir larch flooring runs through the cabin. Says Bill: “Everybody walks in and thinks it’s salvaged. Our builder did a nice job matching the texture and stain color to the reclaimed wood throughout the rest of the cabin.” 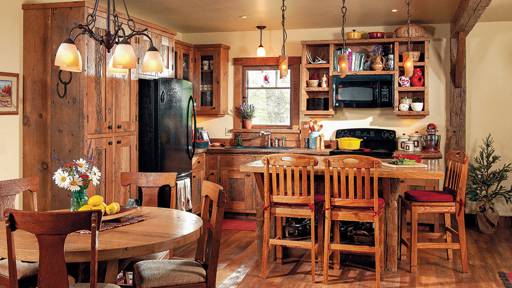 Mikki had two primary objectives for the kitchen: “I wanted it to be open to the entire living room, and I wanted an island for all the cooking and baking I do,” she says. The builder constructed the cabinetry and open shelves (reminiscent of those in old cabins) out of reclaimed pine. Meanwhile, he used reclaimed oak for the island top, dining table and the post and beam that frames the division between the kitchen and living area. 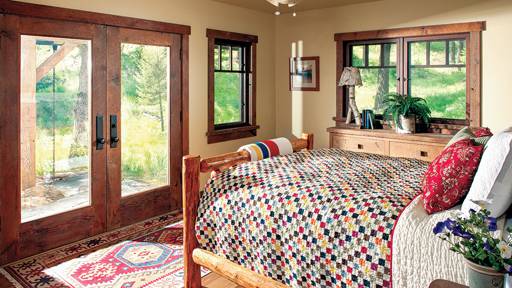 “We wanted lots of windows to enjoy the views outside the bedroom,” Mikki notes. The pine post bed complements the birch lamp, which the Lukens built from a downed tree they found on a backpacking trip. The builder constructed the doors (which open onto the back patio), windows and the reclaimed-wood dresser.

The builder used red wood from one of the dismantled barns as wainscoting. He also built the vanity and corner cabinet out of reclaimed wood. For the sink, Mikki commissioned Whitefish Pottery to create an 18-inch vessel that matched the red barn wood. A ceramic tile floor with radiant heating completes the look.

On the front patio, builder Greg Lee built three vertical columns made of reclaimed, circle-sawn eastern white pine, which is rich in character. 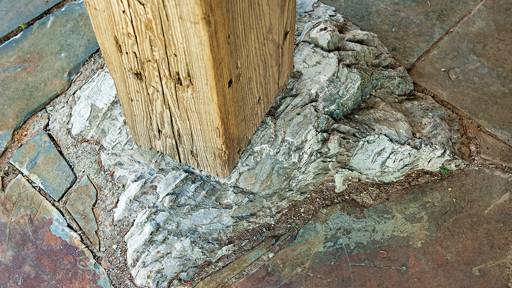 For each of the support beams on the front and back porches, the builder and his team buried large boulders in the land, then fit the posts into the top of the rock using steel pins. “It looks like the beam is growing right out of the stone,” Mikki explains. 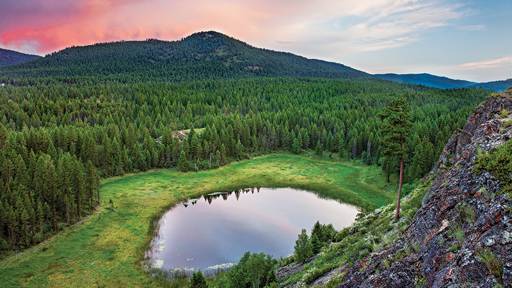 A look over the cliff reveals a three-acre lake, one-third of which belongs to the Lukens. They enjoy fishing and swimming in their section of the water. 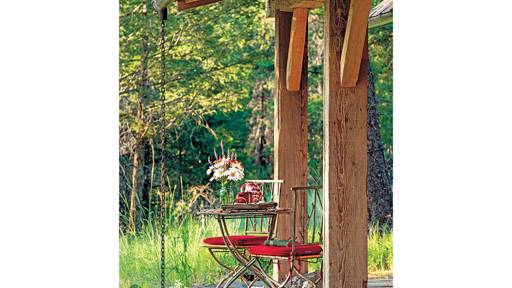 Bill and Mikki added a “rain chain” downspout to the cabin’s gutters — a detail similar to ones they had seen at old lodges.

Thanks to its construction and placement on the land, the cabin appears as if it has always been amidst the trees — just as homeowners Mikki and Bill Lukens had hoped. The architect intentionally placed the home away from the driveway, with a walking path in between, to encourage anyone visiting the cabin to leave their troubles behind.