A series of renovations turns a riverside ranch house into a character-rich cottage perfect for anyone seeking inspiration. 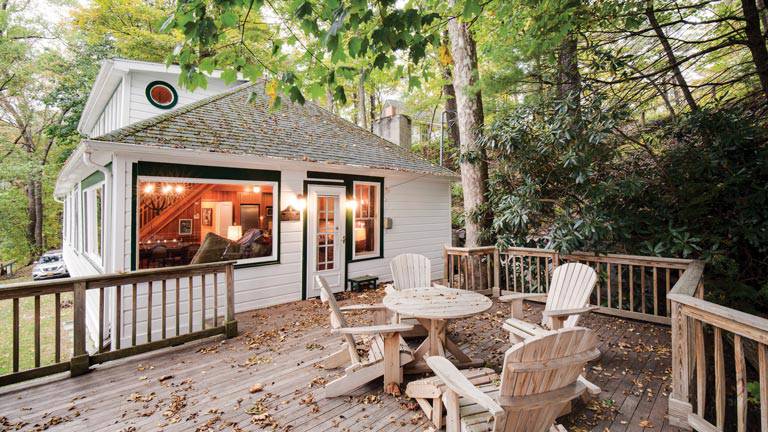 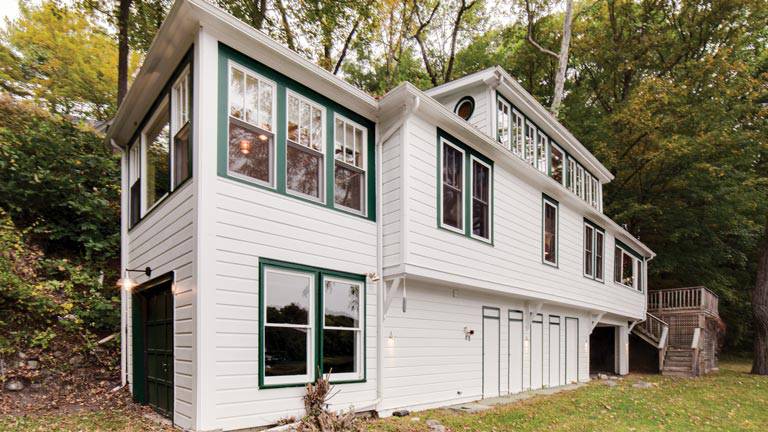 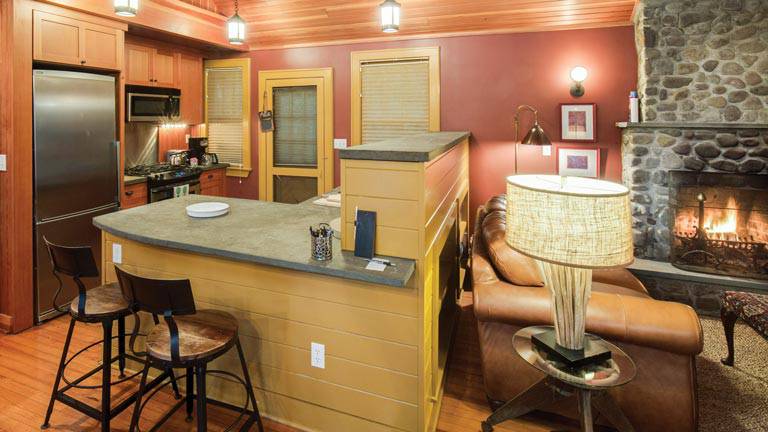 Intentional lighting features in the kitchen and adjacent areas, including  pendants, sconces, a chandelier and under cabinet lighting, lend additional warmth to the cozy interiors. 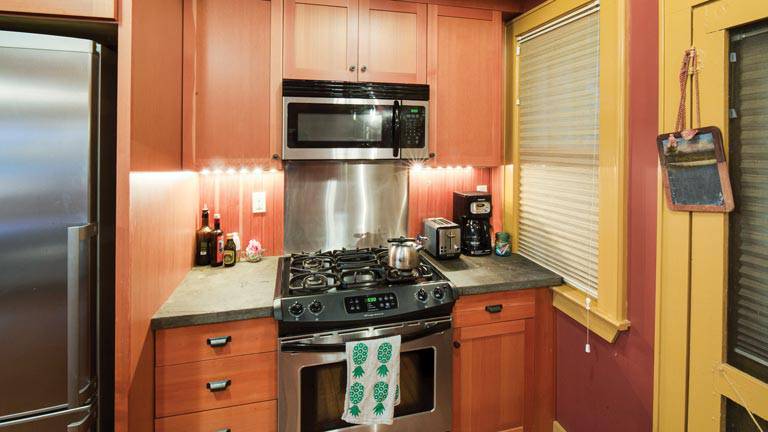 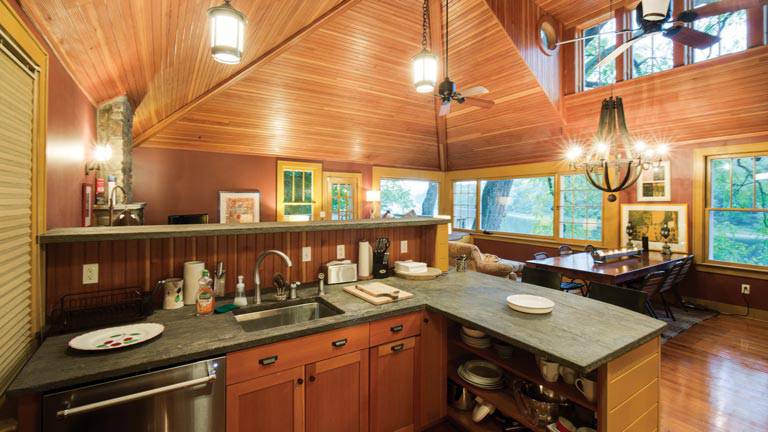 Because of the kitchen’s diminutive size, architect Paul Fiore had to think creatively to add function to the small space. His plan hinged on a peninsula that offers storage, prep space and extra casual seating. 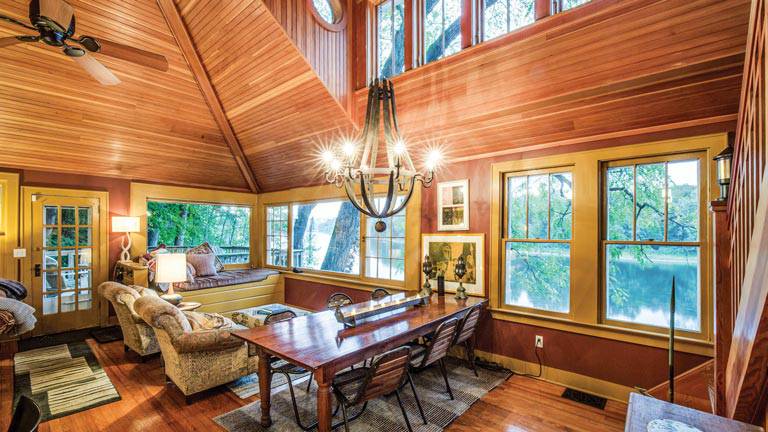 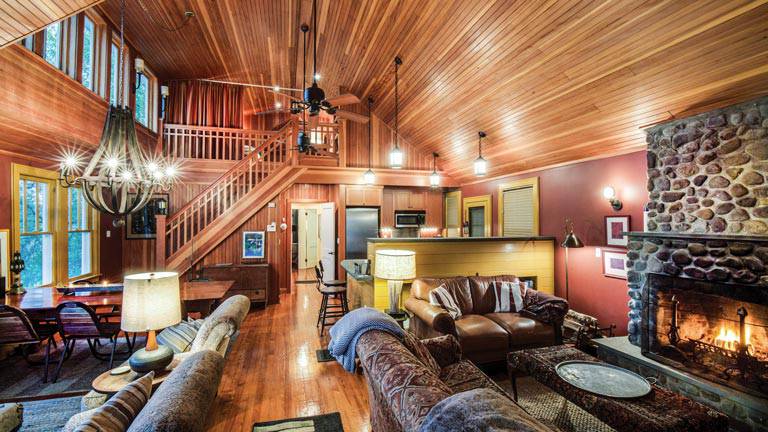 To bring year-round warmth to the cabin, the stone fireplace was added during the home’s original renovation. Homeowner Josh Sapan notes the addition feels “local and organic” due to the fact that the stones were hand-picked from a nearby creek. 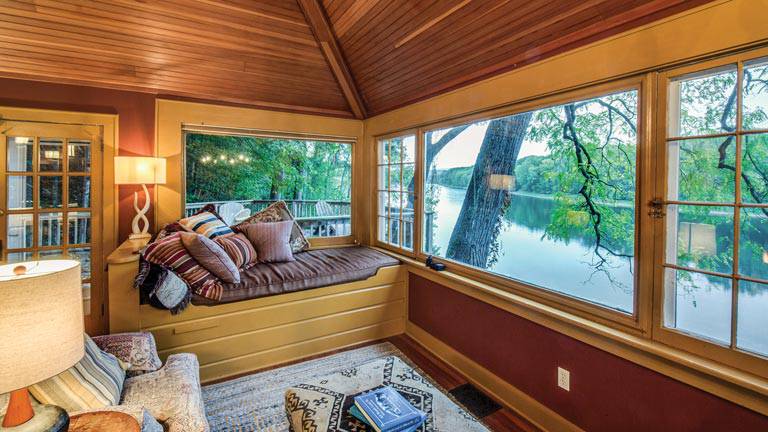 An elevated daybed just inside the front door sets the tone for visitors. Rest and rejuvenation are mandatory at the riverside retreat. 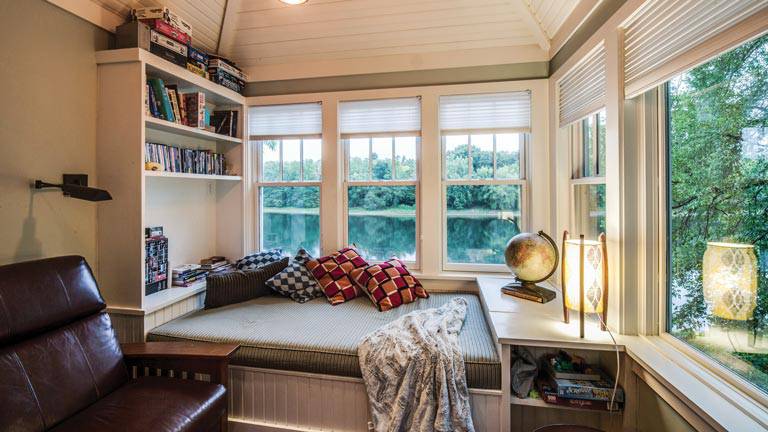 Surrounded by windows, the porch is a favorite spot for creative minds to settle in and absorb the views. Shelves and cubbies around the built-in daybed keep entertainment, from books to board games, within easy reach. 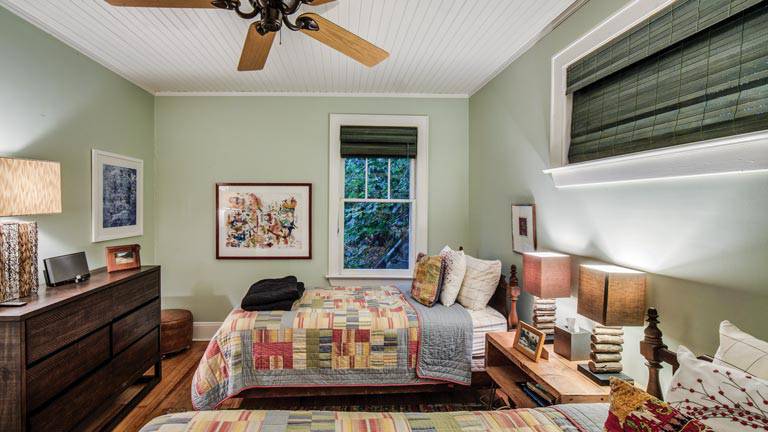 A white tongue-and-groove ceiling paired with seafoam green walls creates an instant sense of ease in one of the home’s three bedrooms. 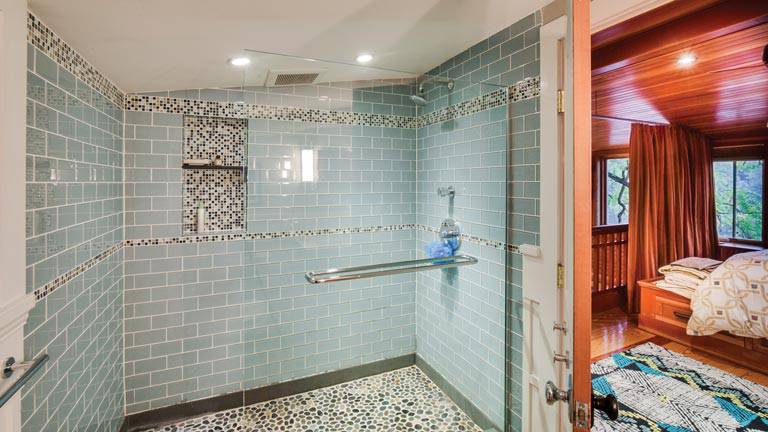 A bathroom in the loft, which includes a spa-like walk-in shower, adds convenience for upstairs guests. 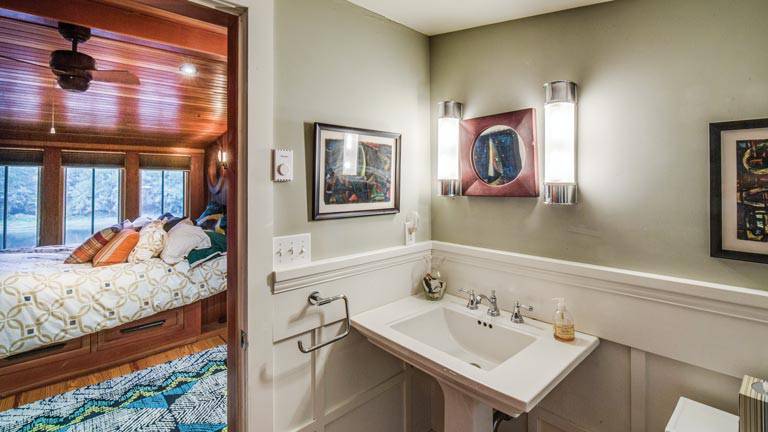 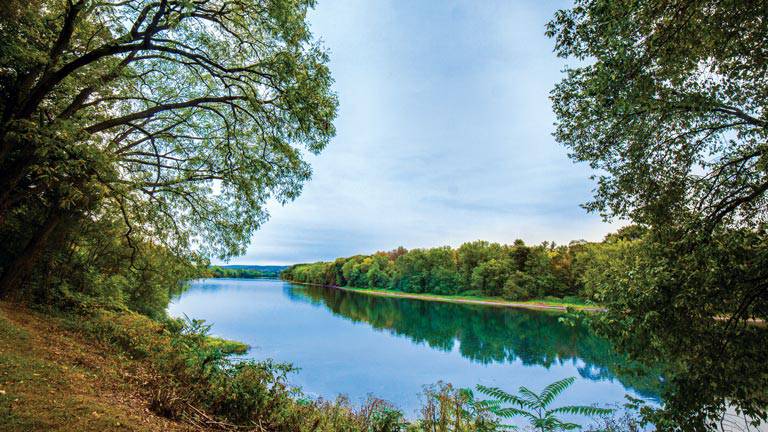 Situated on a quiet bend in the Delaware River, this waterside cabin  offers up private, pristine  views — a result of an abandoned 1970s-era reservoir project that  took down homes along a 30-mile stretch of the shoreline.

Written by Suzanna Logan
Photography by Oleg March
*All products featured are selected by our editors. When you make a purchase through a qualifying link, we may earn a commission via affiliate programs with Amazon.com and other retailers.
Take a drive through the Poconos mountain town of Milford, Pennsylvania, past charming boutiques, a restored theater and perfectly-preserved Victorian homes, and you’ll eventually discover a dirt road the color of dark chocolate. Turn to cross a quaint wooden bridge arched over a creek, continue past a street sign labeled Crimea River Lane (say it slowly) and as you emerge into a pristine clearing, you’ll discover the waterside cottage affectionately known to its revolving door of guests as “Riverhouse.”
Here, the boundaries blur between the real and the imagined. Perched against water’s edge with nothing to see but waves and sky, it seems as if the structure is floating on the river itself.  You can almost feel the rhythmic lap of the water, each one carrying any lingering cares farther and farther away.
Fittingly, it may be the home’s connection with nature’s most wondrous resource that gives the watery oasis its own remarkable story. For here, the contemplative yet compelling qualities of the water seem to permeate the structure — and its inhabitants.

This is the cottage where Frank McCourt detailed his youth in a narrative that became the 1997 Pulitzer Prize-winning, Angela’s Ashes; where National Book Award-winner Colum McCann completed his much-anticipated seventh novel, Apeirogon; and where a bevy of other artistic accomplishments have been birthed.
Owner Josh Sapan, who laughingly refers to the cottage as his “accidental writer’s colony,” believes the tranquil surroundings play a role in the inspiration felt by the “patchwork quilt of renters and friends” who have enjoyed the home since he purchased it 28 years ago. “The absence of noise and distractions allows, in the most obvious way, a certain clarity of thought,” he explains.
Operating within this mental framework allowed Josh to bring the cabin through not one, not two, but three strategic renovations — each growing the impression that the modest structure was more boat than house. “You can’t see water underfoot … but almost,” he jokes. “There is water everywhere you look, left and right.”
Of course, it helps that Josh is a man with a knack for seeing what could be, rather than what is. He is the AMC Networks president and CEO who revamped the once-tired classic-movie channel with hits like “Mad Men,” “Breaking Bad” and “The Walking Dead.” So, when he first happened upon the cottage in the 1990s, sure, he acknowledged the awkward row of doors at the base of the home (clues that the building once served as a bath house), ill-proportioned rooms and the low-slung ceilings that made the space feel cramped and cave-like.
But he saw past all of the quirks to a shoreline retreat with jaw-dropping views, special nooks to cozy-up in and, most importantly, an ever-present welcome mat to anyone who needs an escape from the hustle of city life.

To realize the home’s potential, Josh worked alongside Massachusetts-based residential architecture firm, Foley Fiore Architecture. “One of our first steps was to design the front deck like the prow of a boat going up the river,” explains the firm’s co-owner Paul Fiore, AIA, who spearheaded the project. Next, the team re-framed the entire roof, replacing the original ridge line with a laminated veneer lumber beam that allowed for an open concept kitchen, living and dining area. They also removed the attic ceiling and expanded a small dormer at the front of the home to double the height of the main living area, create space for a sleeping loft and reinforce the watery views Josh craved with big picture windows.
“Now, when you look out the windows, it’s like you’re on the second tier of a boat,” Paul explains. “From even just a foot away from the glass, you don’t see any land, just water. It’s an incredible experience.”
Making spaces ideal for enjoying the views — and fostering works of creative genius — was next on the agenda. Josh and Paul incorporated a trio of comfy daybeds in three separate areas of the home (to ensure views in different directions): the first, nestled against the corner of the living room, another in the loft (this one with a built-in, pull-out tray, perfect for a laptop and pad or pen and a cocktail) and a third in the enclosed porch. “They’re the sort of spaces where you can prop up a pillow, unwind, get away from the world,” shares Paul.
And, if you’re wondering which relaxing spot Josh prefers, here’s his take on the best one in the house: “I go where the most comfortable bed is,” he says, laughing. “That’s what really matters.”