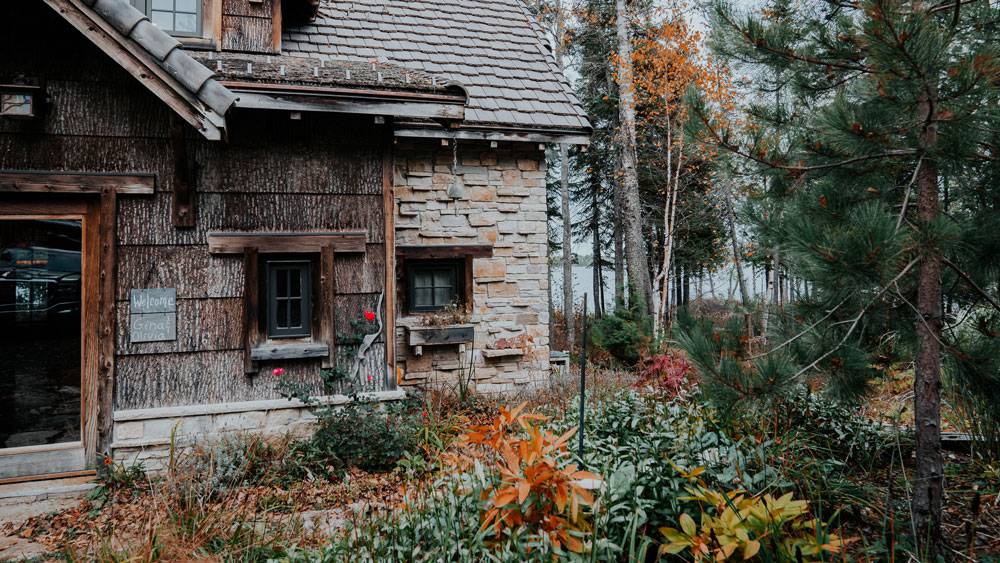 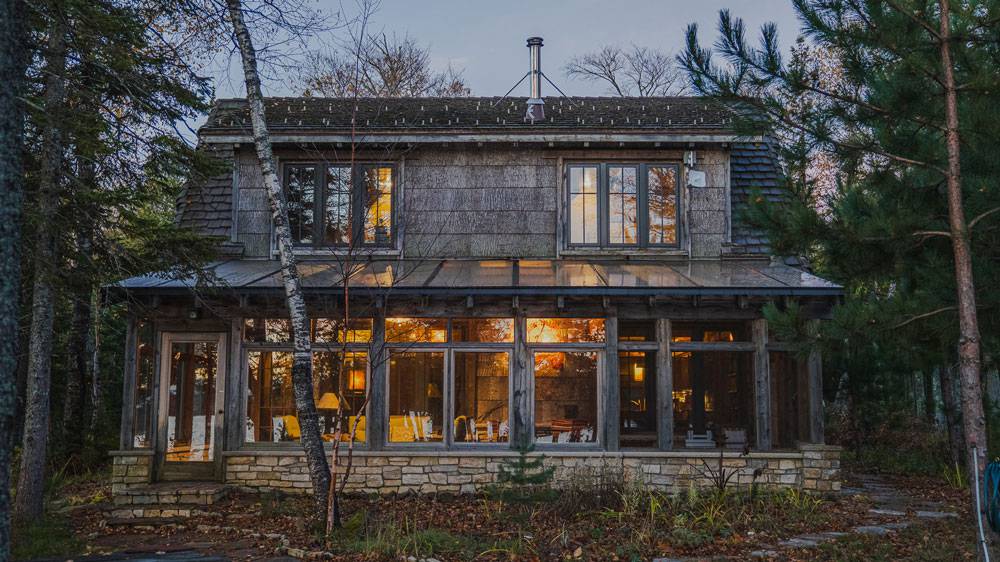 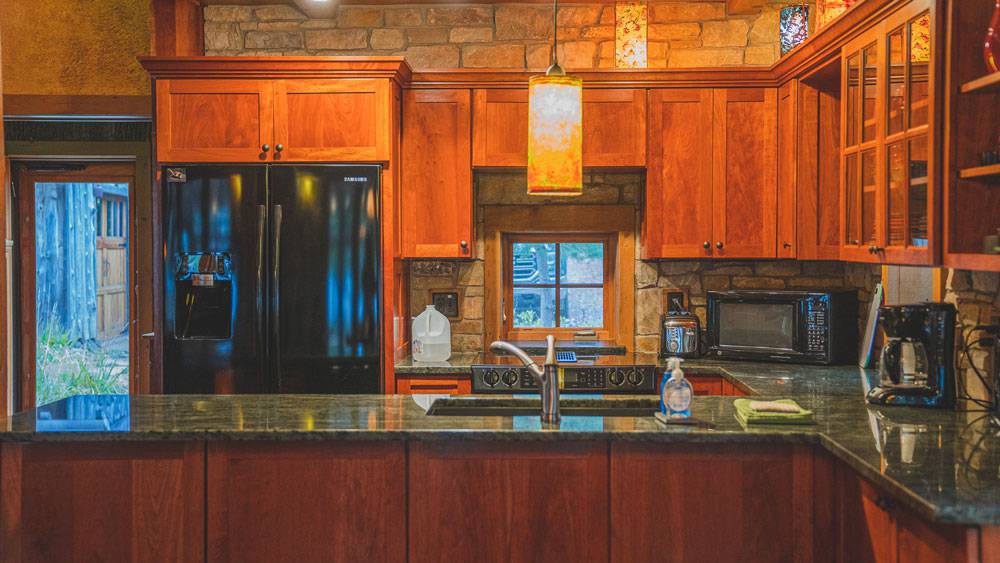 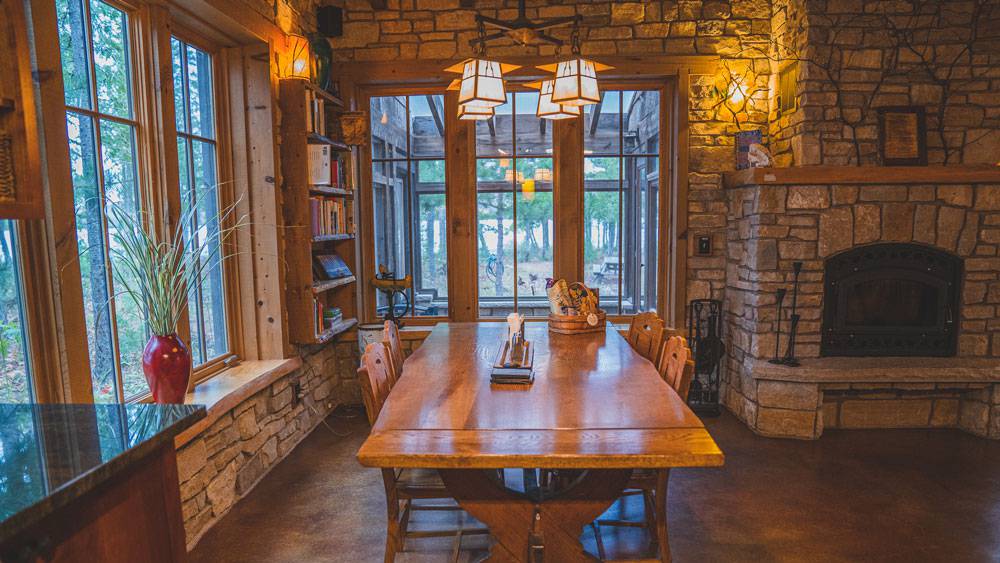 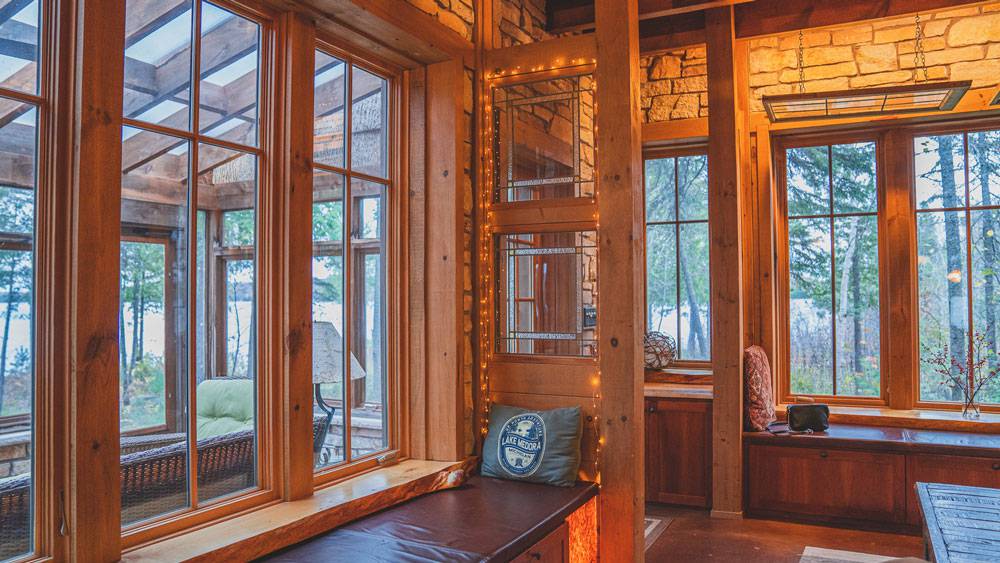 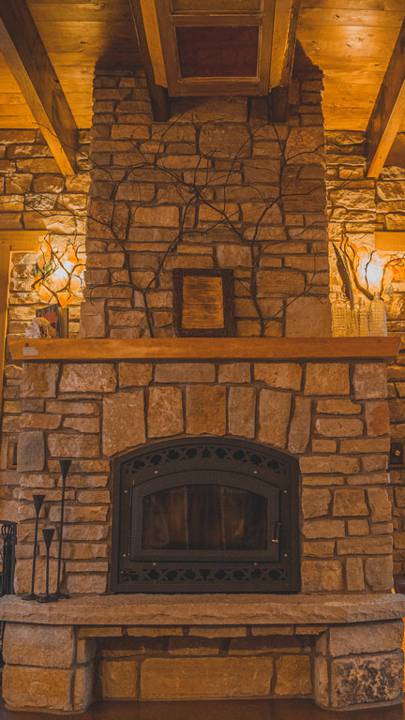 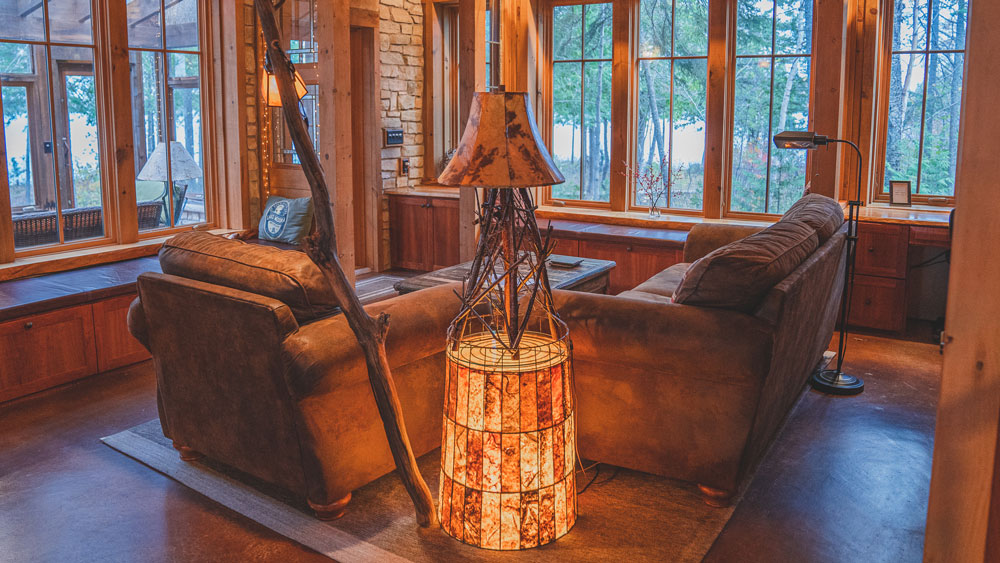 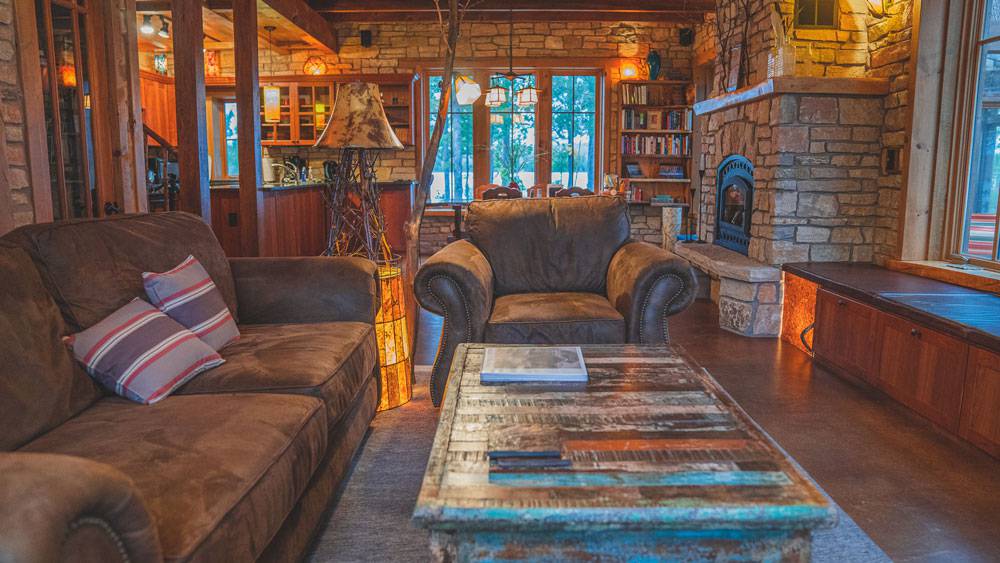 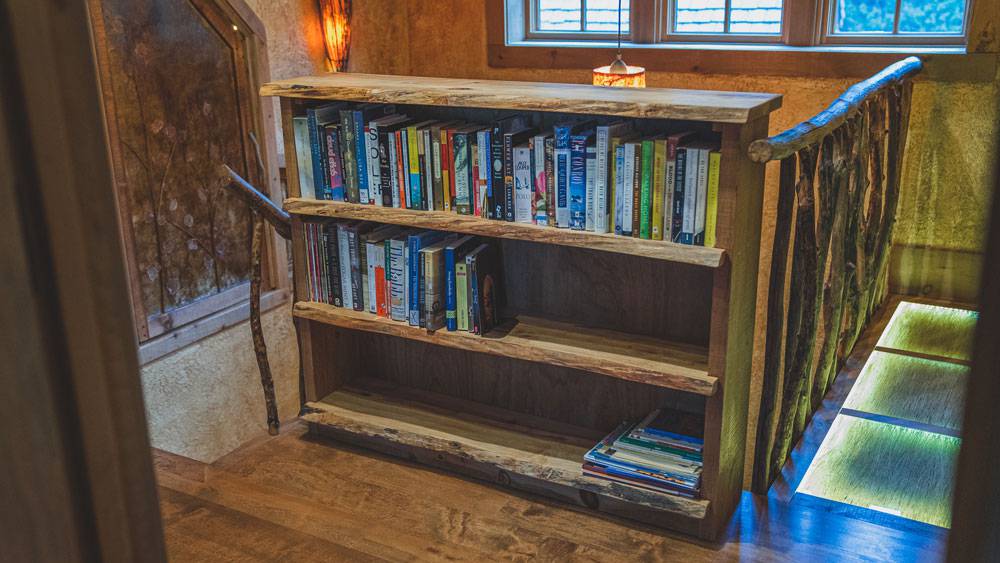 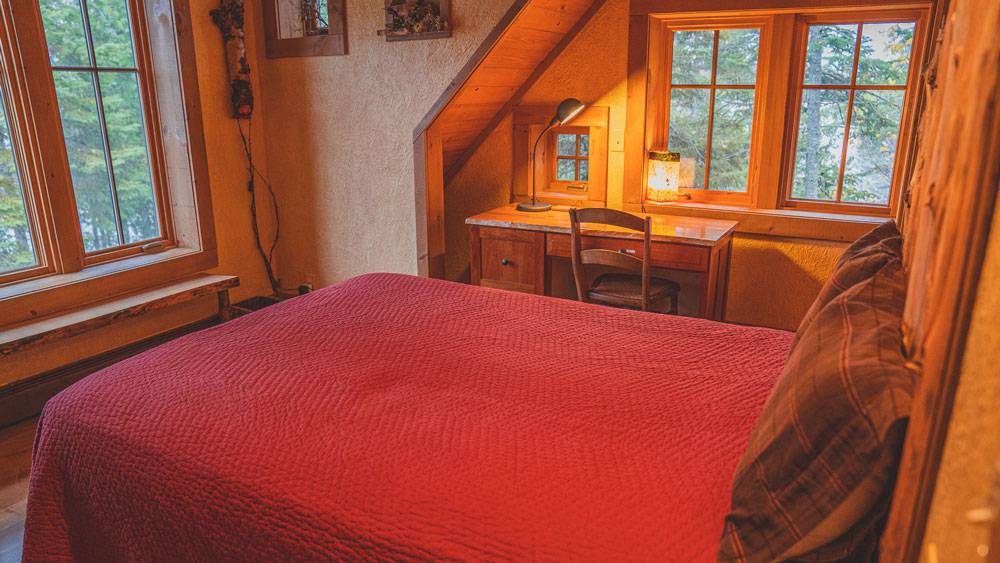 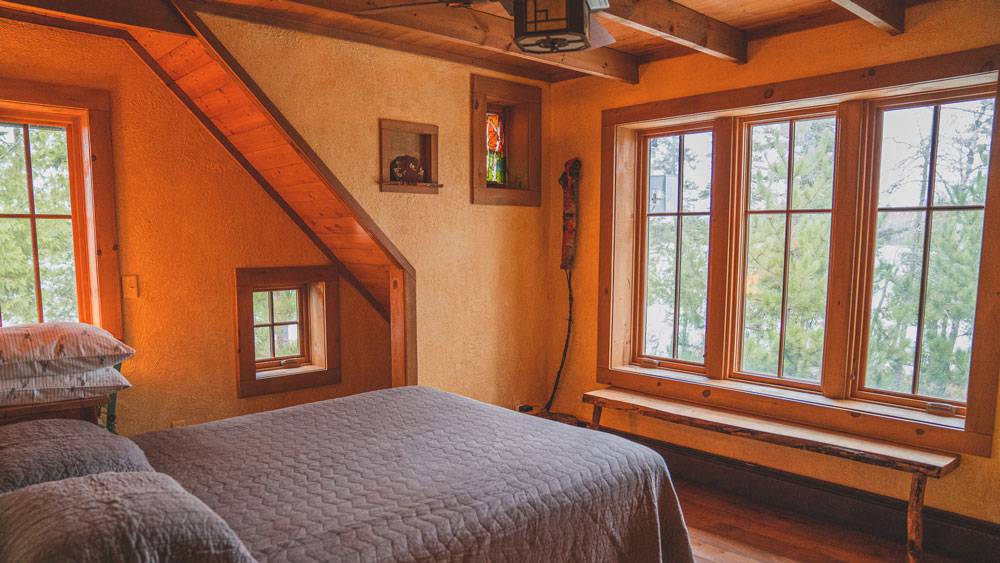 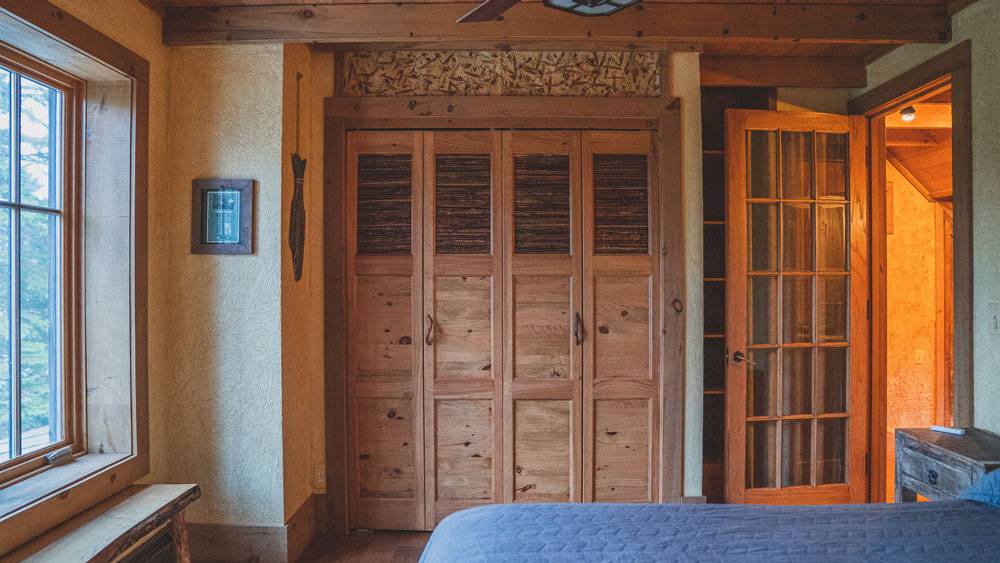 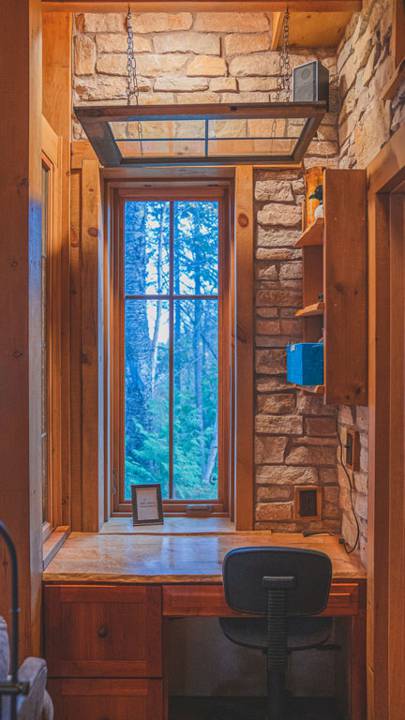 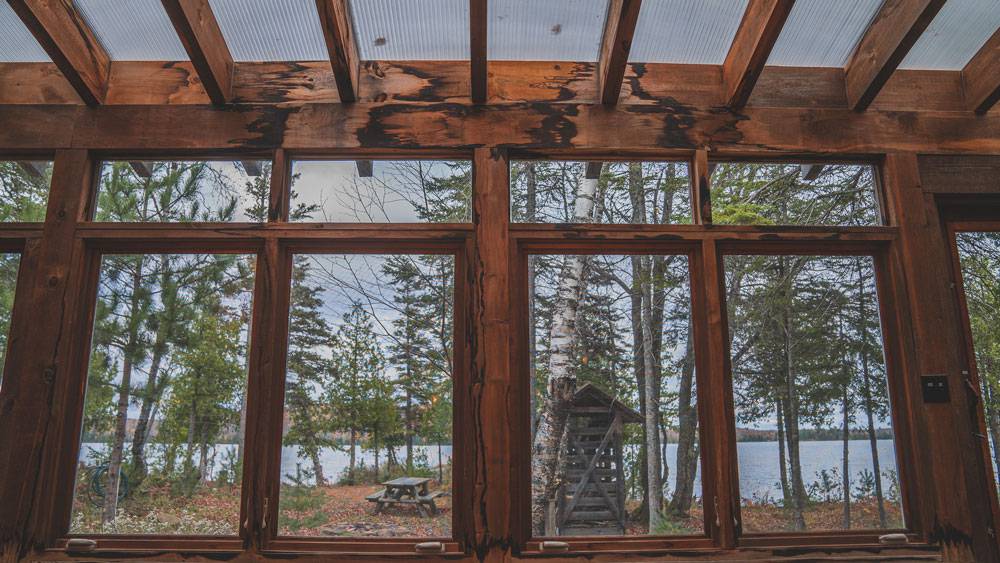 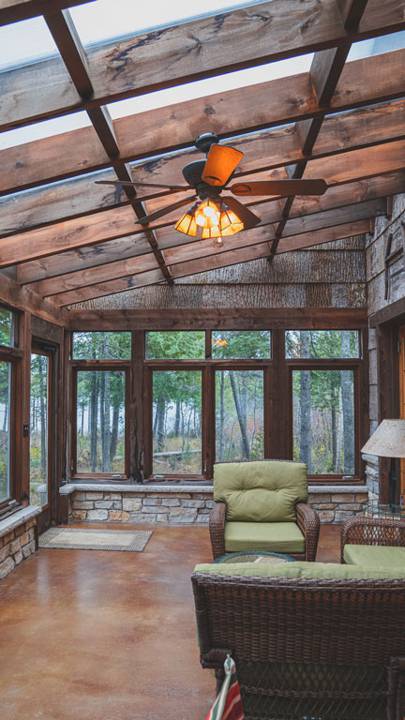 Written by Gina Valente
Photography by Gina Valente
When outdoor enthusiasts David and Colleen purchased a plot of land just outside of Copper Harbor, Michigan, they had a simple goal: to build a straightforward lean-to on the forested lakefront property so Colleen could have a dry place to sleep while the couple enjoyed the wilderness. However, what started out as a plan for a simple shelter evolved into an enchanted, two-bedroom, three-bathroom cabin with all the amenities a traveler could dream of. Here’s how it all began...

After spending years camping across the U.S., Colleen tired of the discomforts of sleeping outside. She reached her breaking point on a frigid night in Joshua Tree, where she was trying to sleep on a leaking air mattress. She said “Enough is enough,” and they came up with a compromise. They’d find a way to vacation in nature that allowed for a few creature comforts. The duo set out to find a Northwoods property where David could build a simple structure.

Thus began the adventure that led them to the northernmost point in Michigan, Keweenaw Peninsula, which boasts a coast that runs along beautiful Lake Superior and is largely undeveloped, filled with wildlife preserves and sanctuaries. Within the peninsula, about 15 minutes outside of “downtown” Copper Harbor, lies Lake Medora, where David and Colleen purchased 10 acres, including 2,500 feet of shoreline.


David began camping on the property, including a ten-day solo stint without books or modern technology. He connected with the land, so much so that he named the property Anam Cara, which means “soul friend” in Celtic. Over time, David created a vision for what they would build: something simple that would provide shelter and comfort that a tent could not yet still feel at one with nature. However, after learning that the zoning laws of the area would not allow for his initial vision of a screened, 216-square-foot structure, he pivoted. They’d build a sustainable, four-season cabin and it would honor the beauty of the land.

The cabin design and footprint was a team effort. David is the creative, playful artist of the operation, and Colleen the organized mind with a zen-like design sense. Together, the two make a perfectly balanced creative team. The result is a captivating cabin that, while striking in appearance, seamlessly blends with the beauty of its natural surroundings.

The outside is constructed of bark and stone and looks like something out of a storybook from long ago. A scenic walking path lines the perimeter, and perennial flower gardens add color to the natural hues of the house.

Inside, visitors will find more stone, bark and wood throughout the open layout. Upstairs are two large, light-filled bedrooms and another two bathrooms. Out back, an all-season porch overlooks the lake. What’s more, the cabin is situated on a peninsula meaning there is water on three sides. From almost any window of the cabin, one can see sweeping vistas of dark blue water. The effect is a very calming, serene environment.


There are many delightful elements that set this cabin apart from others. One such feature is the stunning lighting found throughout the structure. David has learned the art of paper lamp construction, a hobby that has left its mark on the cabin. There are at least 80 handmade lamps, each unique and inspired by nature. Lamps resemble leaves, stumps, nests and more. Their soft warm light helps the cabin feel magical, cozy and welcoming.

David and Colleen aimed to minimize their ecological footprint while building the cabin. The cabin is super-insulated and they incorporated architectural salvage where possible. Mother Nature was their muse; you’ll find branches for the railing leading up to the second level and several recycled windows and doors. Many of David’s lamp creations repurpose material found outside–both man-made and natural.

The finished cabin is not the simple structure the pair had first envisioned, but so much more. It’s naturally beautiful, playful, spacious and comfortable. It offers the best of both worlds, with an atmosphere that is peaceful and cozy, but a location that’s brimming with adventure and excitement.


Ironically, David and Colleen are back to camping again thanks to the discovery of Therm-a-rest mattresses, but the couple makes time to enjoy life in the beautiful cabin they designed. The best part? When they're not there, the cabin can be rented on VRBO for others to experience. You can find the rental information by clicking here, or visiting their website which will be live in December 2021.
See also: A Cottage Straight Out of a Fairy Tale
★