10 Keys to Family Fun at the Cabin 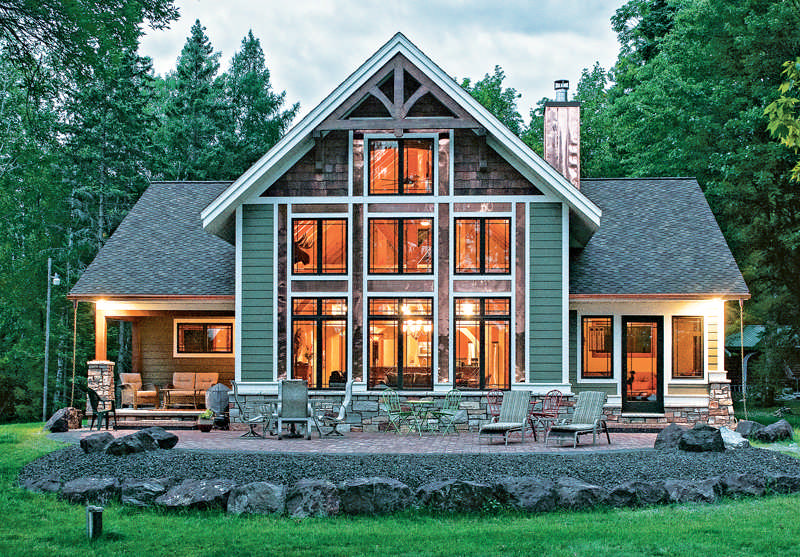 For many, penning the annual December holiday card letter has become a tradition. Determining what newsworthy details to include can take some picking and choosing. 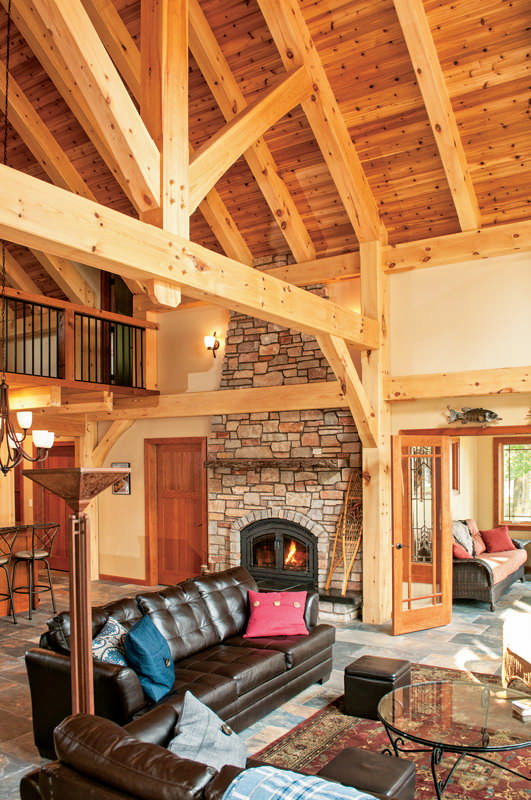 But for Jerry and Heidi Shea, there was a sole purpose for their 2014 letter. What they wanted to share in the letter wasn’t just the yearly news, but promises of future fun on a lake, of memories to be made, of time to be spent reveling and relaxing with family, and the key to making those things happen – literally. In fact, each letter held a key to the under-construction Shea family cabin on Lake Namakagon in Cable, Wis. The letter detailed the fulfillment of a longstanding dream of having “a retreat that we could enjoy with our family and friends to fully embrace the moment and create lasting, cherished memories for all to enjoy.” To that, Jerry and Heidi added, “We want this to be a retreat for our family and friends to enjoy with us when we are there and even without us when we are not.” Jerry is the second youngest of nine children, and 10 keys were distributed. “So far,” says Jerry. Jerry and Heidi felt the call to act on their dream when faced with the recent passing of Heidi’s parents, Wayne and Tawny, who were in their 80s, within three months of each other in the Spring of 2014. They quickly went on a hunt to find the perfect spot and came upon the rustic cabin on 12.4 acres, which abuts U.S. Park Service land to the west and includes several acres of wetland and 180 feet of usable lakeshore. The Sheas purchased it October 1, 2014, and immediately set to work on their dream retreat – tearing down the old cabin just six days later! 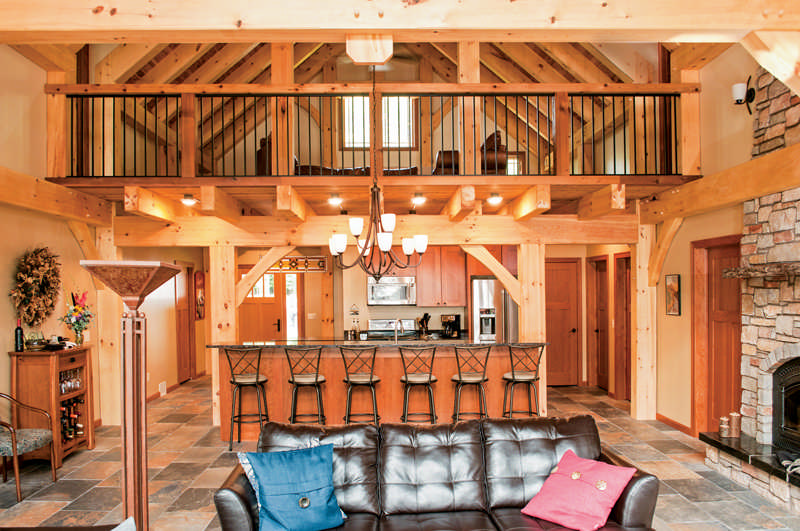 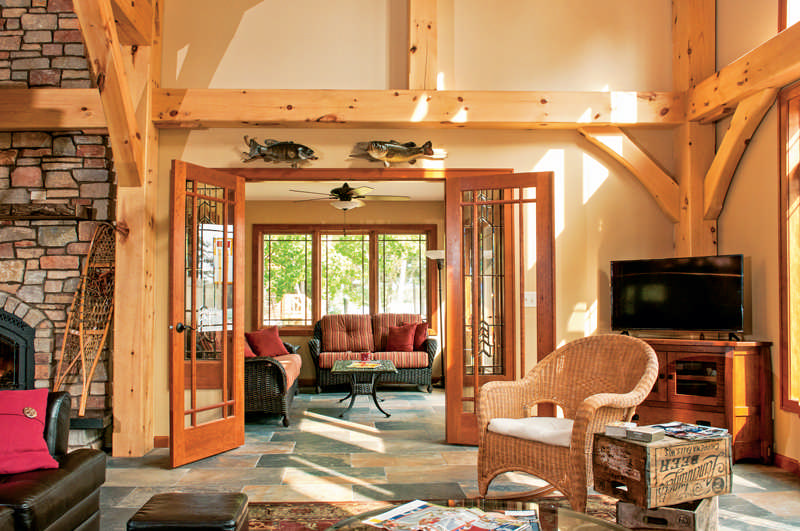 The original on-site cabin was the main house for an old resort called the “Bobynn,” which was built in the 1920s or ’30s, according to Jerry. There is some belief that Al Capone and his gang stayed at the Bobynn, “but that may just be legend,” he says.

The holiday letter provided a website link to track construction progress, which already included: The foundation and slab had been poured and walls and roof partially completed. Gorgeous white pine timbers – logged locally in Hayward, Wis. – were used to fabricate the great room frame off site. The frame would be erected on site that January. The cabin was a familial labor of love in another way as well. Jerry is the President of Market & Johnson, a commercial contracting firm based in Eau Claire, Wis., and his brother Jim is a retired construction superintendent from the firm. “He was the main driver behind most facets of the cabin’s construction,” said Jerry. Plus, most of the work was done by Market & Johnson craftsmen. “It’s a point of pride for Heidi and me,” says Jerry.

The Shea’s cabin uses a structural design element that craftsmen around the world, including those at Stonehenge, have used for thousands of years. “Joining two pieces of building material using a hole/slot and a tab/tongue is called a mortise-and-tenon joint. It’s a strong, yet simple way to frame a structure. Each tenon snugly fits into its mortise and is secured, typically with glue, pins or wedges. The Shea’s frame uses oak pegs in white pine beams. Additionally, the bents (main frames) have no steel connectors. “The triangle (knee braces that you see in the corners) are all structural and help transfer the load on the frame down to the posts,” says Doug Beilfuss of Custom Timber Frames. And while most of today’s mortise-and-tenon joinery is done with machinery, it’s still a specialty craft. “Jerry and Heidi’s timber frame is completely handcrafted by three of us in our shop,” says Doug. “This method is becoming less common as more companies move to CNC (machine cut frames).” “Softening the look of the frame,” according to Doug, was done through the use of curved timbers. “They are structural, yet handcrafted to be beautiful,” says Jerry. The idea to construct their frame using mortise and tenon came from two projects that Jerry worked on at Market & Johnson. “After those two projects, I really wanted to do one of my own. It all came together with this building.” 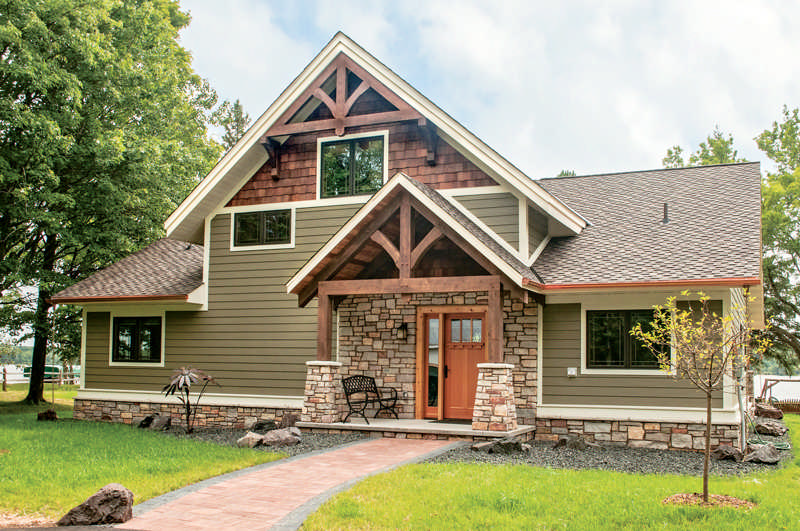 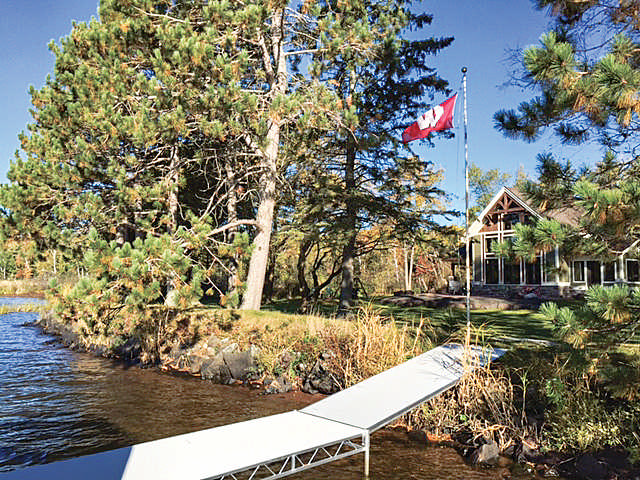 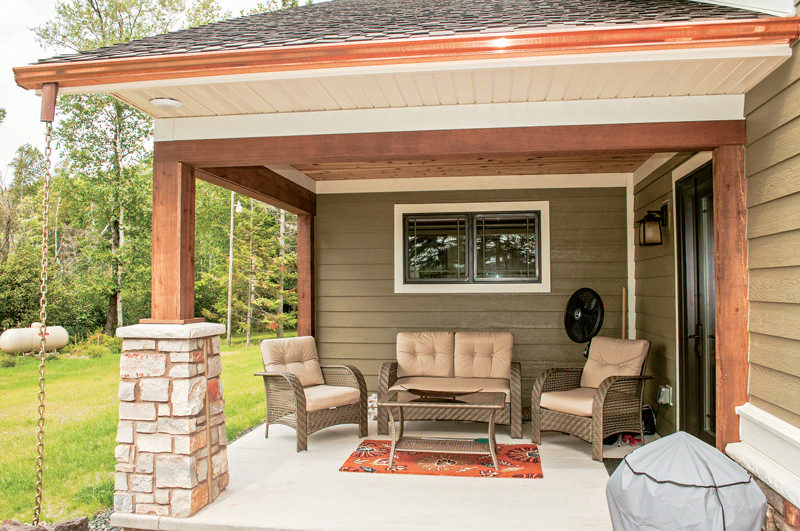 May 2015 marked the start of this new era, as construction was completed on the 4-bedroom, 2,900-square-foot cabin that included loft and bonus spaces on the second floor.

What’s on the inside

Constructed with durable, easy-to-maintain materials, the cabin’s great room center section, with a ceiling peak at 22 feet above the floor, is the “main feature by far,” says Jerry. “Doug Beilfuss, (owner of Custom Timber Frames, LLC) did a wonderful job and was the highlight of the team.” Other features that the Sheas rank as top picks are the fireplace and stone exterior, salvaged leaded glass from a local antique vendor that was worked into the sidelights of the sunroom doors, the open air porch on the west side – which Jerry says always has a breeze – and the fire pit. Flooring includes 18x24-inch slate tile in the great room, with the baths, pantry and laundry room using 12x12-inch slate tile. The bedrooms are carpeted, while the loft is tongue-and-groove cedar. 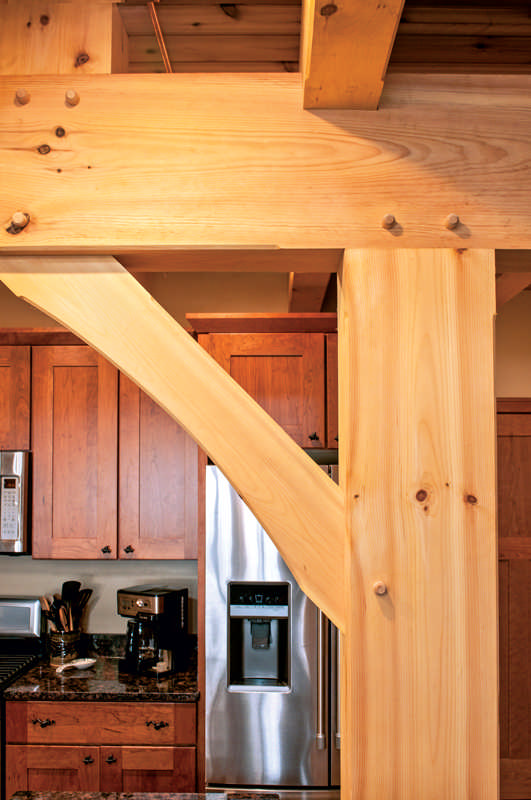 With a south-facing siting and a multitude of windows, the cabin is bathed in natural light almost all day. “The site is perfectly placed on the lake, and we wanted to be able to take advantage of that view and natural light from anywhere inside the cabin,” says Heidi. “The abundance and size of the windows lets us do that as well as being able to watch the eagles, loons, osprey and otters on the lake.” Choosing interior paint colors to complement the location and feel of the cabin was an easy task for Heidi, according to Jerry. “She has a great feel for colors, and they really came together cohesively tying the décor together.” The paint colors accent the pine structure, cherry trim and doors, as well as the cedar paneling. The furnishings are a combination of antiques from Heidi’s mother, Tawny, and new, Amish-built pieces interspersed with old furniture taken from the couple’s house in Eau Claire. Though the large rug in the living area is new, it was selected because it looked worn and comfortable. Salvaged granite from the Bobynn resort’s fireplace, which was originally mined from a quarry in Mellon, Wis., was repurposed for the great room’s hearthstone. And a northwood’s cabin would not be complete without fish and game mounts. Heidi’s father, Wayne, caught the small- and largemouth bass on Island Lake, where Heidi spent many summer weekends growing up. “They were Wayne’s pride and joy when they were hung up in his game room,” says Jerry. “We thought it was fitting that they were hung up in our cabin to remind us of him.” 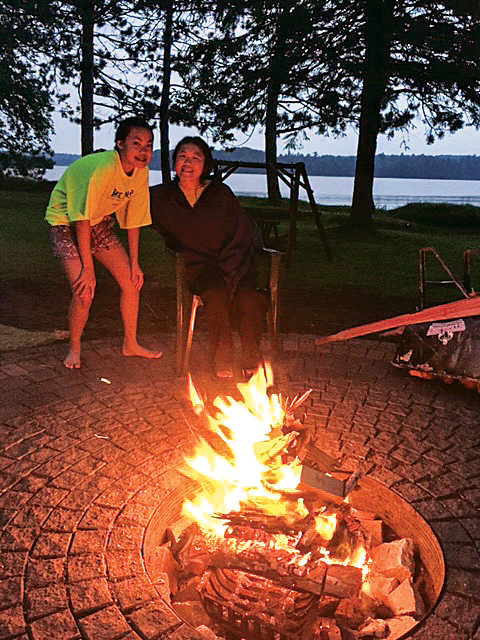 The Alaskan moose head was a bit of a long running joke, according to Jerry. During construction, Jerry teased Heidi and the girls several times that the living area needed a moose head. Heidi was unconvinced, and the couple’s family and friends were doubtful that Jerry could get away with putting one up. “Several times I teased the girls that I found a moose head, much to their howls of ‘No way dad, Mom will kill you!’ ” says Jerry. “I eventually found a great mount at a reasonable price on Craigslist up in the Twin Cities. I convinced Heidi to give it a look, and the girls and I went up to get it. Heidi finally caved when (daughter) Kiki named the mount, Rufus, on the way home. It took five of us to hang the beast up, but it fits perfectly.” One of the furniture pieces, evocative of the families’ togetherness in more ways than one, is the dining room table. “My brother Joe built it for our mom’s house 33 years ago with the intent to accommodate our large and growing family,” says Jerry. “It has a family tree carved on one of the leaf extensions.” The table was put into storage in 2005. Jim suggested we make that the main table in the house, and Joe agreed. “It’s perfect for many reasons.” Putting fare on the table is an easier task, as “the kitchen is built to accommodate preparation of wonderful meals,” says Jerry. “Heidi, and my sister Julie and her husband, Dean, are great cooks.” 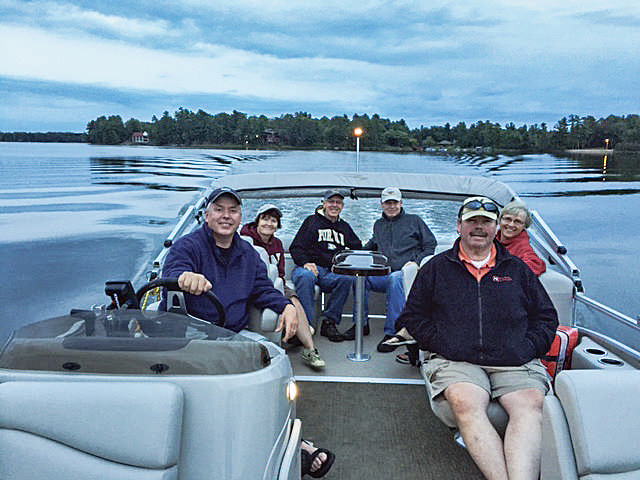 The first week of June, Jerry, Heidi, their two teenage daughters Cooper and Caelan (Kiki) and golden retriever, Keller spent their first official time at the cabin wrapping up details and enjoying their inaugural weekend boating, tubing and kayaking. 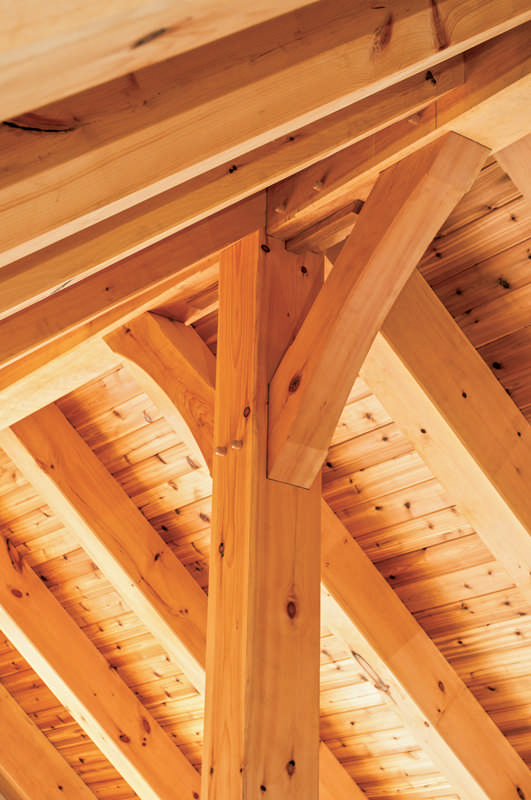 The Fourth of July weekend, the family welcomed the first visitors. “We had Jim (brother) and Sue (his wife), Dennis (brother) and Luanne, Julie (sister) and Dean (her husband), and Mary (sister) and Kaelie (her daughter) join us for a long weekend of boating, tubing, fishing, kayaking and stand-up paddleboarding,” says Jerry. “We also ventured to the Delta Diner in Delta, Wis., which has great food, staff and atmosphere.” Winning the prize for traveling the farthest to use the cabin would be Kevin, a brother, who ventured from New York City in November. The family’s “tradition” schedule is filling up fast. The Sheas found they can view fireworks shot off from one location on July 3 while sitting at the fire pit, and on July 4, they can gather on the pontoon for another spectacular show shot from another close location. “Girlfriends weekend” was held in August. November brought the men’s gathering, as “the Shea men started a deer hunting tradition, though none of us hunt,” says Jerry. Heidi and Jerry have enjoyed the cabin almost every weekend, and they spent two full weeks living the relaxed, lake pace. “We have great neighbors on the lake that makes it easy to go there,” he says. The Shea family retreat will definitely serve its purpose of bringing family and friends together, providing more stories to fill future holiday letters.

So Much To Do

The quaint town of Cable, Wis., with a population of 825, is part of a hub of about seven other small towns. The area swells during the summer with vacationers and summer residents who take advantage of the bounty of lakes. There are 963 lakes, streams, and ricers (lakes with a plentiful wildrice harvest) just in the Cable area! Lake Namakagon is one of only three trophy muskellunge (musky) lakes in Wisconsin with 40-pound fish regularly pulled from the water. “Cable has many things going on in all seasons,” says Jerry Shea. “It’s a great lake for boating, fishing, socializing and relaxing.” Just about any activity that one could think of to do at a cabin, this family might try it all. “We may purchase a snowmobile or two due to the extensive local trail network.” The Sheas also enjoy the many restaurants in the area. “The Garmisch is a classic Bavarian-style resort with a great view and the best Bloody Mary’s bar none,” says Jerry. “The River Eatery has the best stone oven pizza around and has a great ownership team/staff.” Topping the list are the Delta Diner in Delta and the Brick House in Cable, which have both been featured on the television show, “Diners, Drive-ins and Dives.” Jerry also recommends walking in Copper Falls State Park. “It’s a geological wonder located in the Wisconsin North Woods.” Gina Chiodi Grensing believes the key to happiness is definitely found at the lake.