11 Ways to Prevent a Break-in

11 Ways to Prevent a Break-in

It’s a great feeling to pull into your cabin’s lane or driveway, knowing that your sanctuary awaits. But if you’ve ever arrived to find that your cabin has been burglarized, then you’re familiar with just how quickly that great feeling turns to fear, anger and frustration. According to crime prevention authorities, most cabin and cottage owners can make their places more secure by making a few simple changes to their door and window locks.

“Burglars want to be in and out of your home within six minutes from the time they arrive,” says Dickie Thomas, a crime prevention deputy in the Collin County Sheriff’s Department in McKinney, Texas. “So what you want to do as a homeowner is buy yourself some time by making it more difficult for a criminal to enter your home.”

Thomas recommends that cabin owners start by inspecting their doors. Most front doors have a deadbolt lock with a striker plate on the opposite side of the deadbolt. The striker plate (or “strike reinforce”) is a critical link to the locking system.

“If the bolt is just going into the jamb, it won’t take much to kick in the door,” says Mike Holman, Senior Product Manager for Schlage Residential Security Products. “That strike reinforce, however, significantly increases the kick-in resistance.”

Still, it is not enough to have a striker plate installed; it needs to be installed using the proper hardware. Thomas says that too often, small 5/8-inch screws are used to screw the deadbolt striker plate in place, but they do not reach deep enough into the wood to remain secure. As a result, an intruder can kick in the door with very little effort.

“Usually the homeowner will find that the little strip of wood where the deadbolt goes into the striker plate has been knocked loose,” says Thomas. “So we recommend that homeowners replace those small screws with 3- to 4-inch screws that go down deep into the wood and grip stronger.”

If an exterior door has glass near it, a burglar simply has to break the glass, reach in, and unlock the deadbolt. So for glass doors, Thomas recommends installing a flip lock, which is longer than the deadbolt striker plate and can be flipped around to allow the door to open normally. When the plate is flipped back and drops into the slot of the plate, the door will not open.

“This is an inexpensive device that is easy to install, but it will frustrate the burglar and buy you time,” says Thomas.

When it comes to sliding doors, Detective Lieutenant Tim Cook of the Cheboygan (Mich.) County Sheriff Department suggests that cabin owners use security glass and secure the bottom portion of the door with a pole so that it cannot open.

For side or back entry doors on garages, Cook has another suggestion. “If possible, have a metal or wood latch system the size of a 2x4 that goes across the inside of your door,” says Cook. “[This way, if it is] kicked, it will not break.”

As for windows, Cook recommends that cabin owners use dowels or pins in the frame of the window so that it cannot open completely.

Auxiliary window locks are also a great option. If you look at your window, the top half stays fixed in place while the bottom half slides up and down inside a track formed by a little lip of metal, which extends out from the wood or sheetrock around the window frame. An auxiliary window lock is a small U-shaped clamp with a tightening screw that slides onto the lip of metal, right above the bottom portion of the window when the window is in the locked down position. The clamp is screwed down until it secures the device, and the window cannot be raised even if the regular window locks are open.

“Just be sure that family members know these auxiliary locks are on the windows in case of fire,” says Thomas.

All authorities agree that taking a proactive stance is the best defense against burglars.

“The more you can do to hinder a criminal’s operations, the less likely he will want to mess with your cabin,” says Cook.

Frequent contributor Christy Heitger-Ewing’s cabin was once invaded by ants, to her dismay. Despite their large army and their ability to carry 50 times their body weight, they took nothing.

The 3 Things Burglars Fear Most

Dickie Thomas, a 25-year veteran of burglary and theft investigation, says that burglars have told him that they have three top fears:

• Big dogs. Any barking dog will probably make a burglar think twice before entering, but let’s face it: Tiny the Chihuahua is not as intimidating as Brutus the Doberman Pinscher.

• Nosy neighbors. If an intruder thinks someone has spotted him or gotten a glimpse of his license plate, he will likely skedaddle. 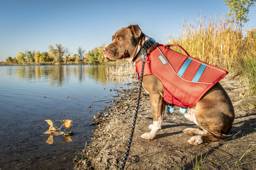 Tips for Fireproofing Your Cabin