A Cabin Built for Relaxation

A Cabin Built for Relaxation

When Tom and Sue Jellison first bought land in Three Rivers, Mich., Tom had a simple plan, you might even say a “manly” plan: Build a log cabin and outfit it with a fireplace, bar, loft, and bunk beds. Period. Sue, Tom’s wife, had a vision for a log home, one that included nice amenities. “Yes, I wanted heat with running water!” Sue says with a smile. “I also envisioned bedrooms upstairs with bathrooms. I just wanted to make sure it felt more like a home than a hunting lodge.” Ultimately, the couple installed granite countertops and pine cabinets, as well as several crafted features, such as the copper sink basins and intricate wood carvings. She also wanted to outfit the entire cabin with log furniture, including headboards, dressers, nightstands, tables and chairs, stools, end tables, lamp stands, flower vases, and more. In the end, the two minds came together on a plan. “We wanted to make the cabin unique and rustic but also comfortable and inviting,” says Tom. Love at first sight — on TV Tom and Sue began researching the log-home industry and talking to different log-home builders. Then one night, Tom was channel surfing when something on HGTV caught his eye. It was a cabin built out of old-growth, tight-grained, western red cedar logs. And with no caulking or chinking in between the logs, each airtight structure was reported to be impervious to mold, mildew, and insect infestation. Tom and Sue also learned that the homes promised great acoustic ability for extra peace and quiet. It was the striking look of the structure, however, that kept their eyes fixated on the television screen. The couple was mesmerized by the mammoth cedar logs, the tongue-and-groove construction, and the carefully hand-crafted detail afforded to each log. “It was just what we wanted,” says Tom. “We were so impressed with the quality of the product and the master craftsmanship.” The cabin featured was built by Pioneer Log Homes Midwest. The Jellisons’ search was over. Just a chain saw & hand tools Pioneer – along with John Howard, the local carpenter the Jellisons hired – erected a 2,300-square-foot structure using nothing but a chain saw and hand tools. The end result is a rustic, hand-crafted log home with a master suite, two guest bedrooms, 21?2 baths, a large wet bar, and a loft with two sitting areas. The cabin also includes two decks that wrap together as well as several interior and exterior hand-carved doors made of Douglas fir. The intricate carvings – one of an elk surrounded by tall pines, one of a moose in a meadow, another of a bear in a stream with a fish in its mouth – add charming, rustic appeal. Other special touches include bear tracks that appear on select logs and a hand-carved bathroom sink. A place to unwind & de-stress Tom, who owns and runs five companies, wanted a nice retreat where he could regularly host customers and vendors. He got his wish. “The place is ideal for entertaining business contacts. But it has also turned out to be a fantastic place for me to de-stress and decompress,” says Tom. The Jellisons’ year-round home is just 25 miles away in Elkhart, Ind. “I can leave the office and be to the cabin in less than 30 minutes. It’s wonderful!” says Tom. The Jellisons spend weekends and holidays at the cabin with family and friends and their 8-year-old shih apso dog, Emma. Their grown children, BJ and Paige, also relish cabin time. And who can blame them? It sits on 50 acres of alfalfa fields with ATV trails that surround the property. The cabin also has a great view of their ¾-acre pond, which Tom keeps stocked with bluegill, largemouth bass, and perch. “My patience level is pretty short,” says Tom with a chuckle. “So I want to always have enough fish in there so that I can cast out and catch something within 2 or 3 minutes.” Tom and Sue like to sit outside, relax, and sip coffee as they watch the hummingbirds flutter by and listen to the wild turkeys gobbling and yelping. The property also offers a shooting range and plenty of woods for hunting. Sue’s fondness for wildlife, however, has put a little kink in Tom’s hunting. “My wife will say, ‘Don’t shoot Albert!’ ” notes Tom. “I must admit, it’s hard to hunt when she’s named most of the deer!” In lieu of grabbing his gun, Tom often grabs a drink and unwinds on the porch. “I’m not a person who can sit still for too long,” says Tom. “But when I’m at the cabin, it’s a different story.” The pull of a cozy rocking chair, a breathtaking sunset, a refreshing drink and the gentle whisper of an afternoon breeze certainly make for guilt-free downtime. And that’s something Tom, for one, never used to have enough of – until now. “Building this place is the best thing I’ve ever done,” says Tom. “Honestly, it has totally changed my life.” Christy Heitger-Ewing would like to introduce Sue’s friend Albert the deer to her pals Sheryl the squirrel and Wonton the chipmunk. RESOURCES WEBSITE EXCLUSIVE!
CREATIVE CARVING One of the trademarks of the Pioneer Log Homes is an eagle carving, which is often positioned on a structure’s ridge beam. The Jellison’s eagle, however, is on the back porch/pond side of the cabin, placed under the overhang to protect the carving.
Pioneer Log Homes’ John Leszczynski also presented the couple with an unexpected treat. In addition to the eagle carving, Leszczynski included a built-in carved bench on the back porch. The Jellisons were thrilled. “Tom and Sue said that they planned to spend a lot of time on their porch,” said Leszczynski. “So I figured they would appreciate the bench.” Want to build your own rustic log bench? View plans here. 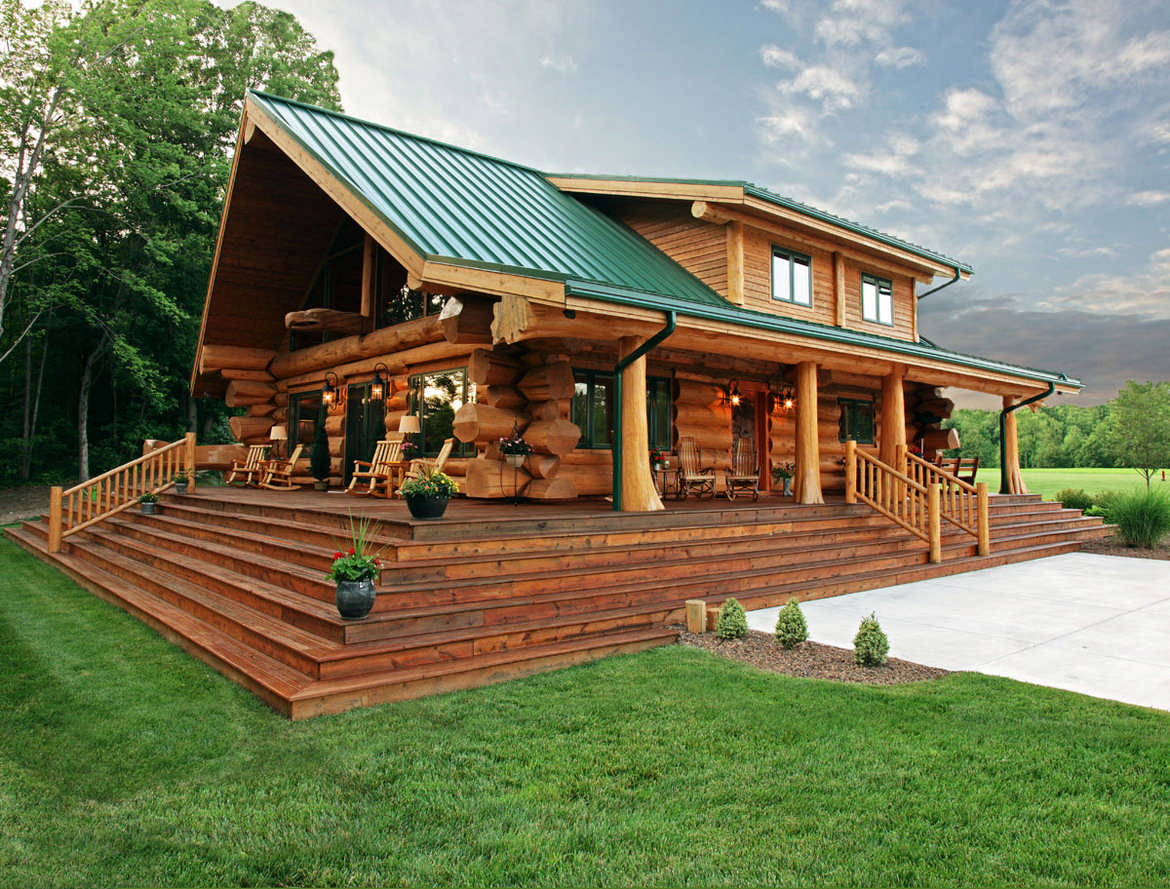 SIGNATURE STYLE – A special aspect of this handcrafted log home is the carved eagle. Also noteworthy: This builder maintains the flare on the bottom of many of the cedar logs. Greg Page Studios