This family recipe is as nostalgic as it is delicious. 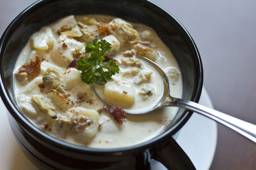 Ezume Images / fotolia.com
My grandmother was a force like no other – a woman who personified the rugged spirit of the West sweetened down by honest tone and loving embrace. She was born and raised in the now-defunct ghost town of Garnet, Montana tucked away in the rugged Rocky Mountains. After raising my mother and aunt in Dillon, a small railroad town famous for gold and elk hunting, she packed her bags and headed north for her next adventure: Alaska.

For decades, my grandma lived with my grandfather, her high school sweetheart, on Prince of Wales Island in the southeast part of the state, laying claim to their land and harvesting all that it had to offer in order for them to live a life of simplicity. She owned this mentality to the core. In fact, one of my favorite memories of cooking with my grandmother was when I was 7 years old. She had just flown in from Prince of Wales, Alaska with a grocery bag filled with dozens of egg-laden berried shrimp. (Unlike most fish, shrimps carry the eggs on the underside of their body until the female is ready to breed.) I can only imagine the bizarre looks she got walking through security at the Seattle airport.

After her death in 2007, my mother quickly turned to her many handwritten bound-at-home cookbooks as a way to remember my Nanny Annie, especially the seafood smells wafting through the backdoor paired with scrubbing sounds of cleaning mollusks. In the ten years since, her clam chowder recipe is one that I turn to for nearly every occasion, from a rainy Sunday at home to the neighborhood barbeque.

To honor my grandmother’s life and the special way that food bonds families together, may you also enjoy her recipe in your own home.

If you do not have access to your own backyard wild-harvested clams, I highly recommend checking with your local fish or farmer’s market. Otherwise, you may substitute wild clams with two cans of minced clams and skip this step. Additionally, when harvesting wild clams, check with seasonal tide warnings and other local rules and regulations. Contact your state’s Department of Fish and Wildlife to find out more.

1.     Scrub the outside of clam shells under the faucet to remove any sand or other grime.

2.     Bring roughly two inches of water to a boil. Let the clams cook in the steam from the boiling water for about 5 to 10 minutes until the shells open. Discard any that did not open.

3.     Once cool enough to touch, pull the clams from the shells and mince into quarter-inch sized pieces. You may retain some clams in the shells for a decorative flair to top off at the end.

4.     Bonus tip: Save and crush the clam shells to boost your chickens’ calcium intake during laying season.

1.     Sauté bacon over medium heat in a cast-iron skillet. Once crunchy, remove and place on a paper towel but reserve the bacon grease. (You may also substitute with butter.)

2.     Cook and stir onions in bacon grease (or butter) until soft, 5 to 8 minutes. Add potatoes, 1/2 the bottle or one can of clam juice, celery, carrots, salt and pepper to taste and top off with water until potatoes are barely covered.

4.     Bring to a simmer, reduce heat to medium/low, cover the saucepan, and cook until potatoes are tender enough to piece with a fork, about 15 minutes.

5.     Melt 1/2 cup butter in a large pot over medium heat. Whisk flour into melted butter until smooth. Whisk milk, half & half, and cream into flour mixture until smooth and slightly thickened, about 10 minutes. Stir vegetable mixture, bay leaves, thyme, and dill into cream mixture. Bring to a simmer, reduce heat to medium/low, and simmer until vegetables are tender and chowder is hot, 15 minutes.

6.     Stir in minced clams. Season with salt and pepper to taste.

7.     Chop bacon and sprinkle over the top of each serving for taste and aesthetics. Top off with any clams still in the shell here.

[Special thanks to Hamsa Healing Mag]