A Milwaukee couple loves their year-round off-grid cabin retreat in The Last Frontier. 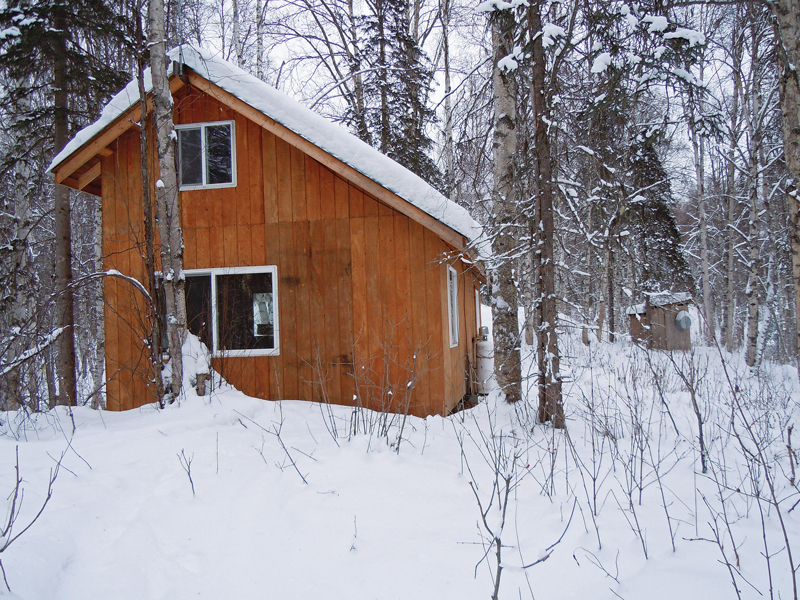 It takes grit to live off-grid in winter. And that’s just in the lower 48. But what if your retreat is in Talkeetna, Alaska – gateway to Denali National Park? Here, just south of Denali, the highest peak in North America at 20,310 feet, the thermometer can plunge to -35°F. Still, you never hear folks grumble about the cold, says Cliff Couture. Maybe that’s because it’s a “dry” cold. Since there’s no moisture in the snow, strolling outside when it’s -20°F doesn’t take your breath away like it would back in Milwaukee, Wis., where Cliff and his wife, Lori, own their primary home. Waist-high drifts are also taken in stride in Talkeetna, given an average annual snowfall exceeding 100 inches. “Up there, they complain if there’s not enough snow,” he adds with a laugh. Cliff and Lori enjoy visiting their rustic Alaskan getaway year-round. But their favorite time to visit is winter. “It is more social,” Cliff explains. “Less people working long hours like they do in the summer.” That’s certainly true for the couple’s daughter and son-in-law, who operate a thriving food truck business from May through September in Talkeetna. The Coutures’ daughter moved here about 15 years ago to work for the park service; she married a local contractor and started a family.

“She wanted us to be involved with the grandkids,” says Cliff. So in 2006, when a 500-square foot cabin in the woods next to the younger couple’s home came on the market, Cliff and Lori seized the opportunity. They soon found that the “distressed” selling price matched the state of the cabin. “There were two wood fireplaces,” recalls Cliff. “One hand-built and not good. The cabinets were half done. The electrical was sort of in, but it had a low-cost inverter that was loud.” Added to the list of shortcomings were: poor batteries, no solar panels and no hot water. 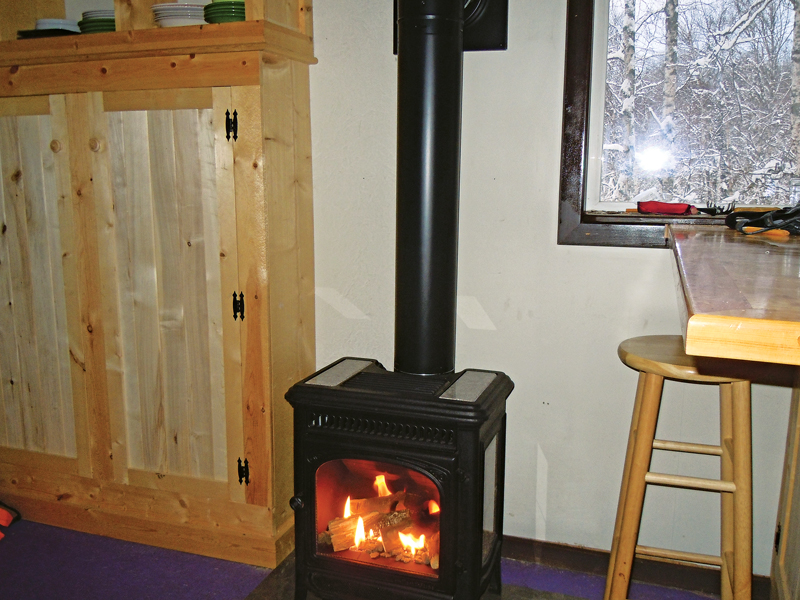 The cabin is basically three rooms: a kitchen, living room and loft bedroom. A 5x5-foot closet contains equipment, batteries and the water system. 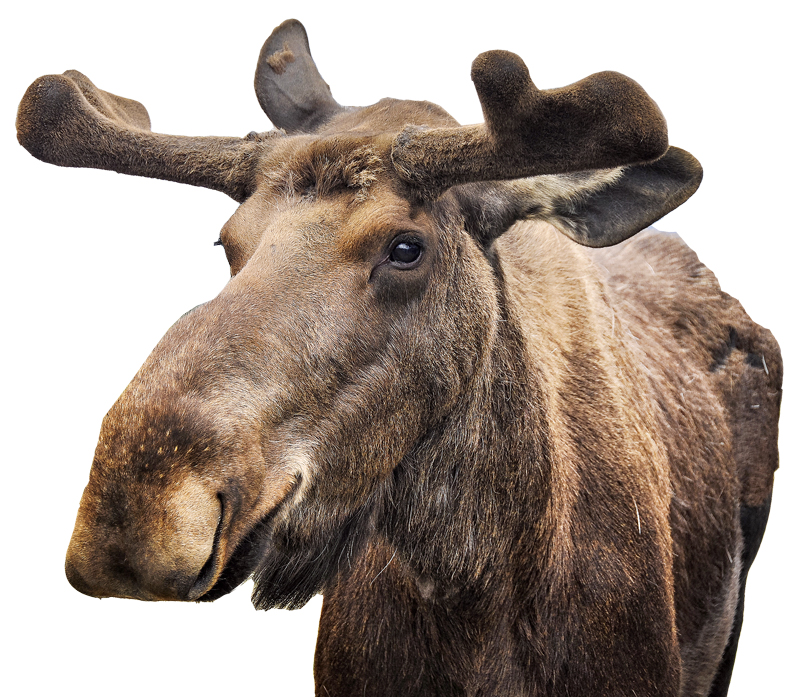 Cliff installed a new electric system, including a main junction box to replace the old one that wasn’t up to code, plus an array of off-grid components. He mounted 185-watt, 36-volt solar panels outside the small loft bedroom window. “That’s so I can take the screen off to easily brush away the snow in the winter and clean it in summer. The first thing I do in the morning is check the panel for snow or dirt,” says Cliff. “I have a squeegee with a 4-foot extension.” When the angle of the panels need adjusting for optimal solar orientation, he gets on a ladder and removes some bolts from the aluminum mounting bracket. “It helps to be handy,” laughs this recent retiree from the foundry industry and former hardware store owner. A Morningstar MPPT charge controller converts the high input voltage from the solar panels down to the 12 volts needed to charge two Surrette batteries. The batteries run the water pump and satellite Internet. A Morningstar inverter delivers 300 watts of power. The modest amount is ample for the couple’s needs. “We try to keep it like a cabin, not like a home,” says Cliff. Still, the couple can run a coffee grinder, computers, a 32-inch Samsung TV with a video recorder for watching movies and more. A 36-inch Casablanca DC ceiling fan uses 7 watts of power and maintains an even temperature throughout the cabin. “In winter, we don’t have a problem running [electricity] all day. Our system is pretty balanced,” he adds. Cliff replaced the two original 100-gallon propane tanks with a 400-gallon tank that is filled by delivery truck. He also replaced one of the original woodstoves with a cast iron propane model and the other with a wood-burning Jotul. A cast-iron kettle on top of the woodstove helps alleviate dry air in the cabin. For their cabin lighting, the Coutures rely on LEDs. “CFLs [compact fluorescents] take so long to turn on because it’s so cold,” says Cliff. “LEDs go all the time, you never have to change them. “ 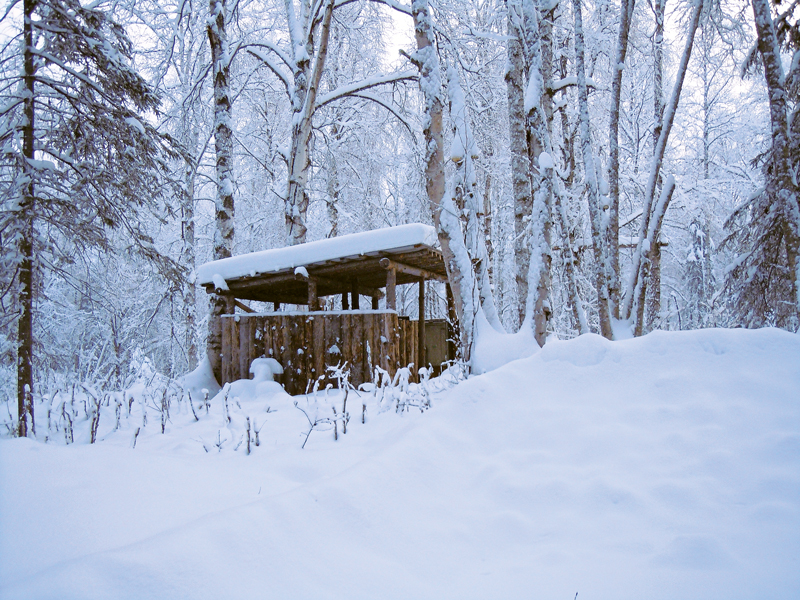 The kitchen boasts a propane refrigerator and propane range that ignites with a 9-volt battery. “It’s amazing what Cliff has done,” says Lori. “When we first got the cabin, it didn’t have three-quarters of the amenities.” (Her one “complaint” – the fridge doesn’t have automatic defrost.) There’s hot running water, too. On one flight out from Wisconsin, Cliff brought a tankless water heater in his suitcase. The small Bosch on-demand heater kicks in when it gets a half-gallon-per-minute flow through it, he explains. However, a well on the property is not connected to the cabin. “Because it’s so expensive to do solar and run a well, I put in a battery operated pump and an accumulator water tank,” says Cliff. Cliff uses a hose to pump water into a 35-gallon holding tank inside the cabin. The water is preheated in a 2.5-gallon tank before it goes into the tankless. “The water’s so cold up there,” Cliff says. He replaced the 120-volt element with a 12-volt submersible heater element made by SES and sets the built-in adjustable thermostat to 110°F. On another trip up to the cabin, Cliff packed a washing machine in his suitcase. “When I went through the line at the airport, the guy made me plug it in and turn it on,” he recalls with a laugh. The 1940s-era porcelain washer belonged to Lori’s aunt. About 18 inches in diameter and a foot and a half tall, it holds under six gallons of water and runs off the cabin’s gasoline generator. (“There’s not a lot of propane generators up here,” observes Cliff. “They’re harder to start in winter.”) But with no dryer, the wash is hung inside to dry. A pine-paneled outhouse 75 feet from the cabin has a cedar and oak toilet. A urine diverter from the Finnish company Separett (you turn the knob on a 5-gallon pail to separate liquid waste from solid) ensures that the outhouse remains odorless. Cliff stacks a two-year supply of firewood in a two-bay, 16x10-foot woodshed. Since he had to cut down seven trees on the 10-acre property to install satellite Internet, there’s no shortage of firewood. Because the property is so heavily wooded, “you could hardly tell seven trees were cut down,” Cliff marvels. 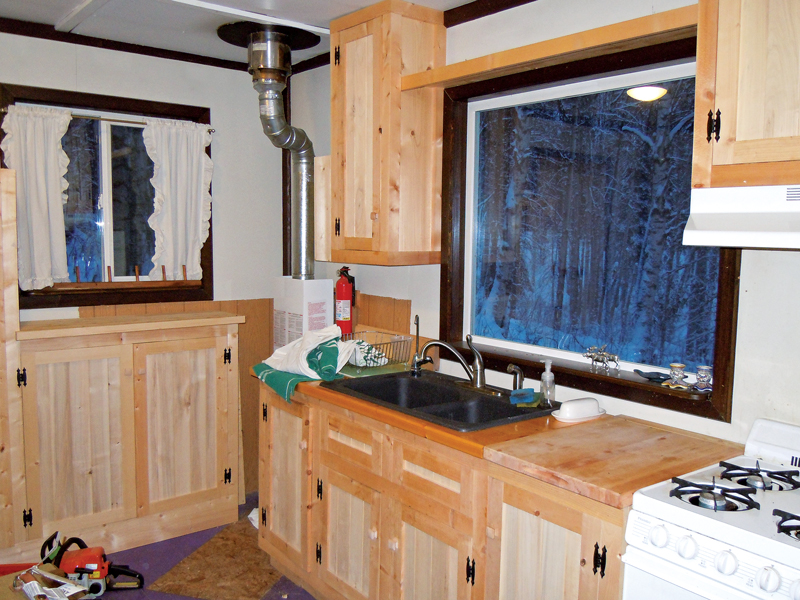 Every day in winter, Cliff spends an hour or two cutting up the downed trees and transporting the piles of wood by sled back to the cabin. Once chores are done, it’s time for play in this winter wonderland. Snowshoeing and cross-country skiing on the property and the groomed trails at nearby Talkeetna Lakes Park are favorite activities for the whole family. Of course, the grandkids – now aged 8 and 13 – join in the fun. Alyeska Resort in Girdwood near Anchorage is the nearest commercial downhill ski resort. But who needs lifts when you can just go up into the mountains and ski? (“You have to know where you’re going,” cautions Cliff.) Snow machines (don’t call them “snowmobiles” in Alaska) are a necessity for getting around. So are white bunny boots. These watertight boots, designed originally for the military, sandwich wool insulation between two layers of rubber to keep feet toasty in extreme cold. And because daylight is limited in winter, you don’t want to forget your headlamp, either. “When it’s dark, you can’t see in front of your face,” says Cliff. The Coutures love to spend the holidays in this close-knit community. “There’s probably nine families that celebrate. For Thanksgiving, everyone goes from house to house. Everyone lives in the woods, and before dinner, you go for walks. If it’s 10 below, it doesn’t matter.” After Thanksgiving, the Couture clan goes on a snowshoe outing to cut their Christmas trees. “We spend the day in the woods and bring sandwiches and cocoa,” says Cliff. On Christmas, he and Lori accompany their daughter’s family to a friend’s cabin on the Talkeetna River – a 7-mile drive on the snow machines. There, an “Alaskan Candle” – a 6-foot-high log filled with wax – is lit to bring good cheer. It’s another of the wonderful ways cabin life in Alaska is so unique.