Find the Right Snowmobile For You
🔍
Sign-In
☰

There are many different types of snowmobiles. Figure out which snowmobile fits your lifestyle best. 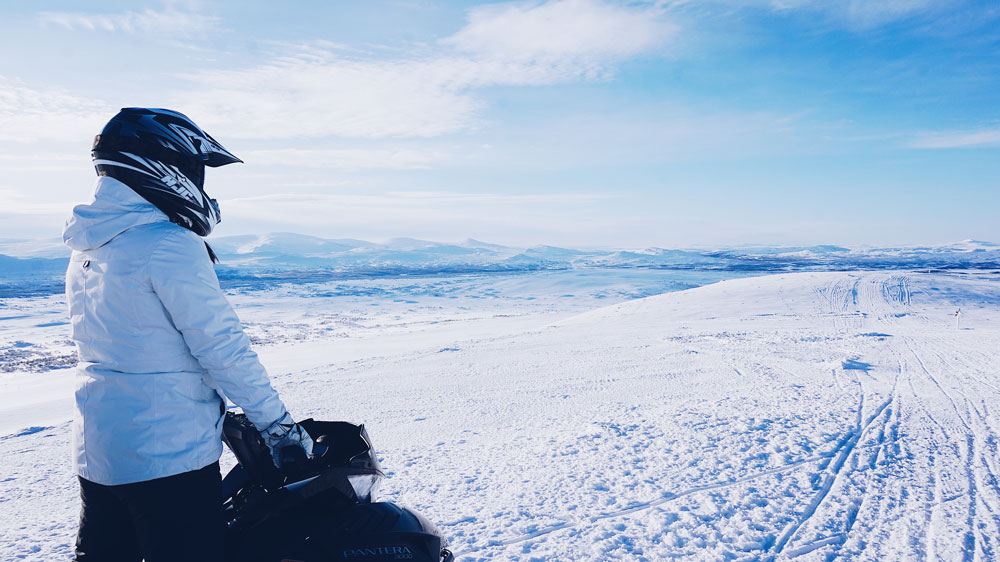 For model year 2012, the snowmobile manufacturers followed the next step in a continuing EPA emissions program. Future rounds of standards are set for 2016 and beyond. So, now and into the future, the snowmobile market will be a leader in clean, fun, exciting recreational motorsports for outdoor enthusiasts.

For many lakehome and cabin owners, the sole reason for having their four-season getaway is to go snowmobiling and recreate outdoors in the winter.
In the last few years, the snowmobile has gone through a lot of changes. The new machines are no longer the loud, exhaust-spewing, inefficient, uncomfortable sleds of the past. Mind you, many of us grew up loving those old machines, but there’s certainly no love lost when comparing them to modern options. Today’s sleds come from four main manufacturers: Arctic Cat, Polaris, Ski-Doo, and Yamaha.

Here are a few facts on modern 2- and 4-stroke powered snowmobiles:

SNOW SHREDDER – This is not your average 4-stroke snowmobile. With the added boost of a turbo-charger, the Arctic Cat F1100 Turbo Sno Pro Limited packs 180-plus horsepower. Kort Duce

4-stroke Gets a Boost

Traditionally, to achieve greater fuel economy and avoid constantly adding injection oil, motorsport or power-equipment buyers bought a 4-stroke. But 4-strokes were typically heavier, due to their more complex construction, and pound for pound, they weren’t as powerful as a 2-stroke. And 4-strokes were more expensive. However, much of that is changing. The new Yamaha 4-strokes, in particular, are some of the most powerful while becoming lighter each year. This sled also will last many years, running 20,000-plus miles easily with no need for major engine repairs, if well-maintained. Compare that with 4,000–8,000 miles for your typical 2-stroke of just 10 years ago.

The new 4-strokes also are light on fuel. In tests by American Snowmobiler magazine, Ski-Doo’s new 600cc ACE 4-stroke was admittedly on the low end of horsepower but averaged almost 29 mpg! Compare that to 2-stroke sleds with similar horsepower of just 10–15 years ago that were averaging 8–10 mpg. The new technology is light-years ahead.

In addition, 4-stroke snowmobiles like Arctic Cat’s F1100 Turbo come with the extra boost of a turbocharger. Offering advanced performance technology like a turbocharger in a stock snowmobile was unheard of until just a few years ago. Now both Arctic Cat and Polaris have 4-stroke sleds with turbochargers. These fuel-injected 4-strokes have little in the way of exhaust smoke. Oh, and Arctic Cat’s turbo sled packs 180-plus horsepower!

QUIET AND EFFICIENT – The Ski-Doo MX Z x 800R E-TEC is an impressive combination of power and efficiency. Its modern technology also makes for a quieter ride. Kort Duce

Until a few years ago, “clean” was not synonymous with snowmobile 2-stroke engines. The Environmental Protection Agency and the Big 4 sled makers have worked hard to change that. If you’ve spent any time on a lake, you’ve probably heard the name Evinrude. Bombardier Recreational Products (BRP) bought Evinrude several years ago and has since taken the brand’s clean outboard engine technology, known as E-TEC, and put it in its Ski-Doo snowmobiles.

The new 600cc and 800cc sleds from Ski-Doo featuring E-TEC technology are at least twice as fuel efficient as some of the old carbureted engines they’ve replaced, getting over 20 mpg. Additionally, they’re two or three times more oil efficient, and the engines produce little to no exhaust smoke or smell. The days of watching your neighbor pour out of his garage in a cloud of white smoke are gone. These sleds are quiet too, yet just as powerful as the older carbed and newer electronic, fuel-injected sleds from other manufacturers.

Are you an ATV/UTV rider? Here are two incredible accessories that you can add to your machine so you can use it all year.

The first is a snowplow. Several companies make accessory plows, including WARN, BOSS, Swisher and more. You can order plows for your off-road vehicle through most motorsport dealerships, including Arctic Cat and Can-Am dealers. You can also go online or visit big-box outdoors stores such as Cabela’s or Bass Pro Shops.  For more info: www.warn.com, www.bossplow.com, www.cabelas.com.

The second accessory is pricier but allows you to really traverse your property no matter the snow depth. It’s a track system that replaces the four wheels and tires with four small tracks. Several makers are online, including Mattracks and Camoplast, or you can talk to your local ATV dealer.