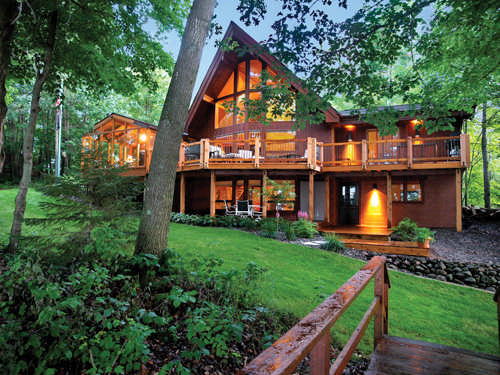 For Jerry and Mary Amundson, their lakehome is all about connecting with nature. And with 400 feet of lakeshore and over 3 acres of land full of pines and poplar trees surrounding them, there’s a lot of nature with which to connect. Photo credit: Greg Amundson, Deer Creek Cedar Homes
In 1990, when Jerry and Mary Amundson built their retirement cabin on Beaver Dam Lake in Cumberland, Wis., it served their needs perfectly. “We wanted someplace where our family could gather and have fun, and this cabin has been ideal for that,” says Mary. Through the years, the Amundsons and their three sons and five grandchildren have spent hours swimming, boating and water-skiing in the summer and deer hunting, cross-country skiing and snowmobiling in the winter.Now that the couple is older, they have traded their speedboat for a pontoon boat and their ski equipment for golf clubs. Jerry also enjoys working out at the local gym, while Mary unwinds by painting. 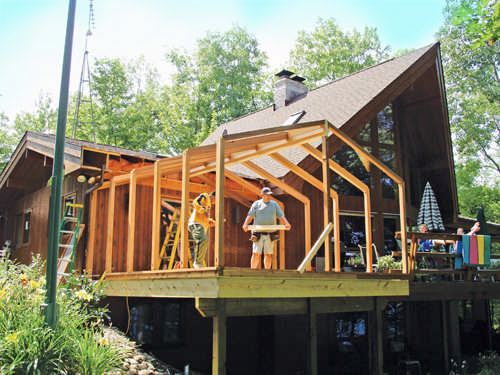 Time for a facelift

As with any house, over time parts of the cabin began to show signs of aging – especially the decks. The floors were rotting out as a result of having been subjected to many years of brutal Wisconsin winds and precipitation. So the Amundsons’ son Greg suggested that his parents tear out a portion of the front deck and build a sunroom in its place. And Greg’s opinion carried some weight, not just due to the familial relationship, but because he owns a building/remodeling company, Deer Creek Cedar Homes, Inc. “I loved the idea of pulling the outside in,” says Mary. “There’s just something that makes me happy about being enclosed but still feeling like I’m sitting outside.” Ultimately, the size of the sunroom was dictated by the footings of the old deck. After pouring over possible designs with Greg, the couple chose to erect a casual but contemporary 225-square foot Lindal Cedar sunroom, complete with 10-foot vaulted ceilings and floor-to-ceiling windows.

special place to hang out

The Amundsons like that their new sunroom lacks a cramped, “boxy” feel; instead, it offers elegant character with a great deal of openness. The entire sunroom is cedar – from the western red cedar beams to the cedar-lined ceiling – except for the Douglas fir glue-laminated ridge beam, which is necessary for structural strength. The couple elected not to install any window treatments – to allow an abundance of natural light to stream into the room. 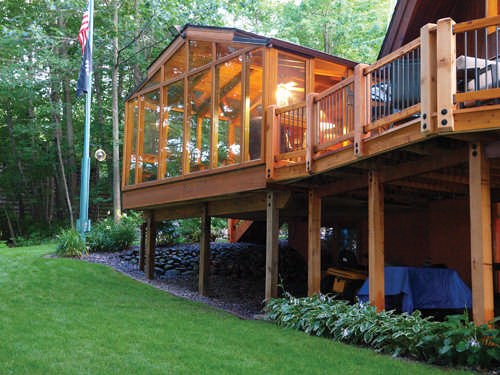 Let the sun shine in! The couple shunned window treatments for their new sunroom, choosing to let maximum natural light shine into the room. Photo credit: Greg Amundson, Deer Creek Cedar Homes
“We went with a design that had maximum glass. Of course, in the absence of blinds or curtains, when it’s 20-below zero, we suffer a little from an energy aspect,” admits Jerry. “But what we lose in energy, we more than make up for in mood by feeling the sun in the dead of winter.” Surrounded by so much glass, one might wonder if the couple feels a bit like they’re in a fishbowl. But given that the Amundsons live at the end of a cul-de-sac and own 400 feet of lake frontage, as well as 3.5 acres of land full of pines and poplars, they don’t feel on display. When folks do visit, however, there is never any doubt where everyone will congregate. Guests inevitably make a beeline to the sunroom – even those guests of the four-legged variety, embracing the warmth of the heated floor. “We had four dogs visit us last winter, and they never budged from the cozy warmth of the sunroom,” says Jerry. 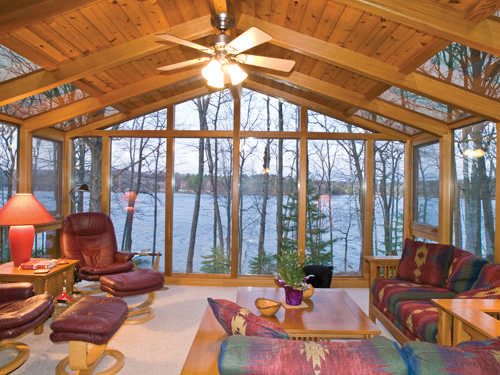 Having been married for 51 years, the Amundsons have collected their fair share of fond cabin memories, and they say they like to relax in the sunroom and reflect on those cherished times. For instance, their children learned to swim and water-ski on Beaver Dam Lake, the same 1,100-acre lake where their three grandsons learned to fish. They also recall watching for the first time as one of their water-loving grandsons, who was three at the time, giddily dove off the dock into the chilly lake; that same grandson is now a Navy SEAL. And they will never forget their initiation to wilderness living. It was soon after they had built the place, and they had not yet learned that there are certain rules to follow when in bear country – like bringing in birdfeeders at night. 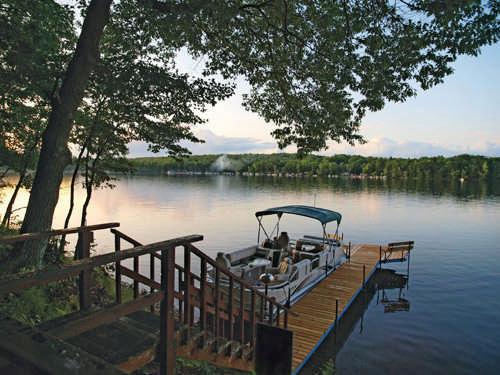 Photo credit: Greg Amundson, Deer Creek Cedar Homes
“One morning we went to the door in the kitchen and just outside on our deck was this big black bear, lying on its back with a birdfeeder in both paws,” says Jerry. “I looked at him, and he looked at me, and he just kept eating from that birdfeeder.” The bear finished his meal and left, but the incident taught the Amundsons that it was probably best not to leave their screen door open anymore. This is not to say, however, that the couple does not appreciate the plentiful wildlife surrounding their cabin. In fact, they enjoy nothing more than sitting in their sunroom and taking in the sights and sounds of nature – particularly in the springtime. “We love it when the loons return from the Gulf of Mexico. We hear them calling day and night,” says Mary. “Also, the eagles nest nearby. And we have a pond here with wood ducks, mallards and peeper frogs.” Jerry describes the cabin as a “dream home,” and Mary vows never again to live in a place that does not have a sunroom. “I’d be happy if my cabin consisted of a bathroom, a kitchen and a sunroom,” she says with a chuckle. “I’d be set!” Frequent contributor Christy Heitger-Ewing has never encountered a bear, and she is okay with that.