Before and After: Farmhouse Style in Bigfork, Montana

A brave Montana couple reaps the rewards of taking on a mammoth renovation.

Winter at this Montana cabin means cross-country skiing and quiet weekends around the wood stove.

Open shelving, a barn-wood ceiling, a deep sink and antique accents in the kitchen reference the home’s history as a farmhouse.

The McAfees opened up this space by removing the built-in beneath the stairs, the outdated ceiling fan and the railing. Elsewhere, they removed walls and a chimney and raised the ceiling. 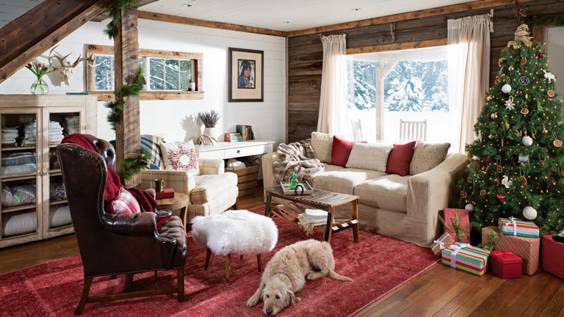 It took vision and plenty of courage to discover what the cabin had to offer beneath its dated appearance, given that it was built in 1920 and the latest remodel was in the 1970s. The end result is a cozy, picture-perfect retreat.

There’s no question that sweat equity and hard work were the driving forces behind this cabin’s revitalization. But attention to detail and aesthetics played a role, too. Choosing a consistent, subtle color palette throughout enables the rooms to flow into one another, making the space feel larger. White floors, walls and ceiling reflect the light, brightening what was once a dimly lit space.

Winter at this Montana cabin means cross-country skiing and quiet weekends around the wood stove.

Written by Melissa Mylchreest
Photography by Heidi Long
In the beginning, the outlook wasn’t entirely rosy at this little farmhouse in Bigfork, Montana. “There were definitely times, initially, that we thought we had bought a lemon,” says Felesha McAfee. Felesha recalls the winter of 2013, when she and her husband, Jeremiah, began the process of renovating the farmhouse they had just purchased. “The day we got the keys, we started tearing the ceiling out. That was the beginning of a year and a half of work.”
Although they were eager for the project, neither of them had ever renovated a cabin or any kind of home before, and the process provided a few challenges. “We gutted the house, and then even gutted the guts!” Felesha recalls. “Every time we pulled down a wall, we discovered another problem behind that problem.”
They ended up replacing all of the house’s innards, including wiring and plumbing, while reconfiguring floor plans, moving walls, cutting doors, adding bathrooms, demolishing the kitchen and any number of other mammoth tasks.
Felesha admits that she’s not sure what it was about the cabin that spoke to her first, given its unpromising appearance. Everything had been remodeled in the 1970s, and it showed – from the wood paneling to the garish wallpaper to the turquoise tub. But, Felesha says, “There was something about it – maybe the wraparound porch – that felt like home, as soon as I toured it.”

From Ohio originally, the Montana transplant was looking for a place where she and Jeremiah could live full-time at some point, with room for additional family as well, and the fact that it wasn’t a traditional Montana cabin resonated with her.
Despite early misgivings, the McAfees stuck with it, and a year and a half later their sweat equity had paid off. The result is a 1,400-square-foot, two-bedroom, two-bath home that is as charming as it is comfortable. The aesthetic is the perfect amalgamation of Midwest farmhouse and Western rustic: Wide floorboards pair perfectly with the white-painted shiplap paneling that plays a prominent role throughout the house. A reclaimed tin ceiling in the kitchen highlights the same earth-tones as the delicate tiled backsplash. An old ladder hangs above a doorway, festooned with lights. A built-in cupboard with screen doors is a clever homage to the pie-safe of a bygone era. Understated beams and reclaimed barn wood lend an air of history and warmth and represent a true labor of love.

“We were lucky enough that Jeremiah was able to barter labor for materials with a company here that salvages old grain elevators and barns,” says Felesha, referring to Wild Wood Eccentrics, a reclaimed-wood business based in Columbia Falls, Mont. “He’d work all day, then go and work more for them,” she recalls, “and all that material became our trim, our floors, our barn doors.”

With an eye toward maintaining an authentic, rustic feel, Felesha combed antique stores and Craigslist for furnishings and other finishing touches. An old cabinet was repurposed as a vanity, after having a hole cut in the top to accommodate a simple, round sink. Other accessories came from consignment shops or from her family back in Ohio. Her favorite find was the cast-iron pedestal tub that now plays a starring role in their first-floor bathroom.   “It’s so beautiful, and we only paid a few hundred bucks. It came out of an old home in Kalispell, which I love – from one farmhouse to another,” Felesha remembers. Re-enameled and outfitted with antique-style hardware, the tub sits flanked by windows in the spacious bathroom – a perfect vantage from which to watch the snow come down in winter or the evening light fade to dusk in summer.
By mid-2015, the Swan River Farmhouse was beautiful, cozy and inviting – and ready for guests other than the McAfees themselves. “The intent was always to rent it out in the summer, at least initially,” says Felesha. Perched on the north end of Flathead Lake, the largest freshwater lake west of the Great Lakes, Bigfork is a bustling tourist town in the warmer months, drawing vacationers from around the state and beyond to swim, boat, fish, hike, paddle the rivers and enjoy the myriad cultural amenities in the area.
But, Felesha says, she doesn’t really mind missing out on summer: “I love how quiet and sleepy the town gets in the off-season. Winter is our time, and we get to come down to hang out, go cross-country skiing with our dogs, and work on projects to get the place ready for summer again.” Because they live full-time in nearby Whitefish, the trip to the cabin is an easy jaunt to make for a weekend getaway but far enough to feel like a true vacation home.
The McAfees will be the first to admit that renovating a house all the way down to the studs and beyond is an enormous amount of work and a daunting experience to tackle alone, especially without prior experience. While it’s an approach that holds a certain charm, it’s not the ideal route for everyone interested in acquiring a vacation home. And yet, when asked if they would do it again, Felesha doesn’t miss a beat: “Yes, we would.” Then she pauses a moment to reflect. She laughs and adds, “Okay, I would definitely do the ‘lipstick and rouge’ part of it again. Maybe not quite everything that we did!”

Bigfork, Mont., is a small town on the very northeast margin of Flathead Lake, the largest freshwater lake west of the Mississippi. With a population just above 4,000, it’s a small town with plenty of charm, and a disproportionate number of cultural attractions: The Bigfork Summer Playhouse, known as the “theater by the bay,” has been consistently providing top-quality theater for nearly 60 years. Just up the road, the Bigfork Art and Cultural Center showcases the work of more than 250 member artists, and also provides classes and openings. Bigfork even plays host to its own award-winning distillery, Whistling Andy, known for its rum, gin, and whiskey, made from Montana-grown grains. Perhaps most importantly, Bigfork provides access to countless outdoor recreational opportunities, including swimming, boating, sailing, rafting, fly-fishing, stand-up paddle boarding, hiking, Nordic skiing, alpine skiing and more.