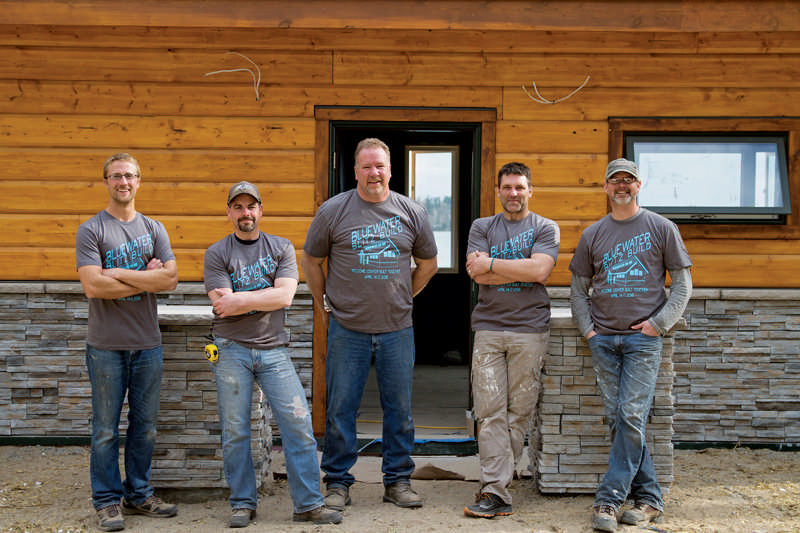 LEFT TO RIGHT: Camp program director Micah Rude, blitz-build project director Nick Schrapp, blitz-build project supervisor Nate Rude, camp director Chadwick Persons and blitz-build project supervisor Tony Gustafson.
On the north side of Bluewater Lake in northern Minnesota there’s a cove that serves as a popular gathering spot for camp goers, cabin owners and lake lovers. A long stretch of natural sandy shoreline that gives way to crystal clear shallow waters where outdoor enthusiasts wade and throw a Frisbee, go for a swim or snorkel. It’s also the perfect spot for boat picnics. Thirty feet from shore, the bottom drops away quickly. Out in the bay, you’ll see dedicated early-morning anglers trolling for lake trout, while later in the day, speed boats pull skiiers, wakeboarders and kids on tubes. It’s on this north side of Bluewater that the Wilkus and Persons families have forged a friendship. For the past 10 years, Chadwick Persons, his wife Penny and their three children Myranda, Cameron and Dawson have lived on the lake year-round. It’s where the Persons run Bluewater Covenant Bible Camp (BCBC, formerly Camp Marmac, established in the 1940s). Three doors down is the cabin property that Mike and Barb Wilkus have owned for nearly 30 years. They started coming up when their son Matt was two years old and son Ryan was two months old. 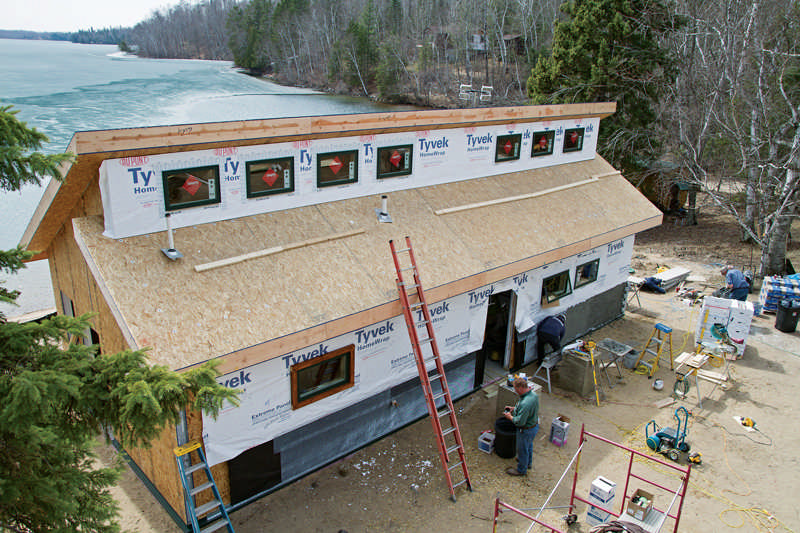 An aerial view of construction on day two.

After three decades of coming to his family’s retreat on Bluewater Lake, Matt has amassed scores of great memories. He vividly recalls his teenage days when he, Ryan and their friends enjoyed weekends at the cabin without parental supervision, spending their days boating, swimming and hiking. Come nightfall, however, they sometimes got a little restless. With a camp full of kids in such close proximity, the temptation to prank was simply too strong to resist. “The camp had a large dinner bell that the kitchen staff rang at meal time, so we would sneak over around midnight, ring the bell, and dart away,” says Matt. Persons, a kid at heart, embraced the hijinks and kept his sneakers and a headlamp by his nightstand, so that when the bell rang, he’d be ready to playfully sprint after the culprits. Not to be outdone, the counselors, who were close in age to Matt and his buddies, sometimes laid in wait, armed with squirt guns. The camp staff also found creative ways to foil the pranksters by wrapping the ringer with duct tape to mute the bell. Another time Persons and his crew evened the score by removing the bell from the tower, carrying it to the Wilkus’ driveway, and ringing it at sunrise. “Hey,” says Persons. “Turnabout is fair play!” 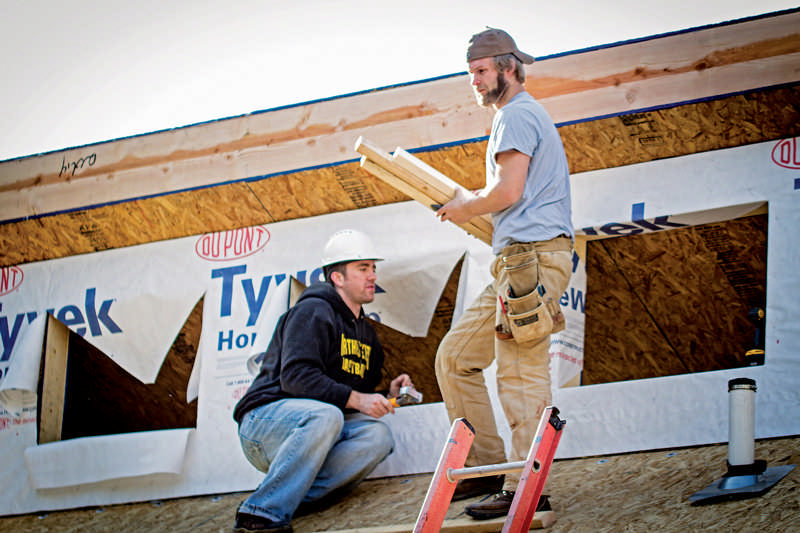 Installation of the Welcome Center’s clerestory windows on day two. 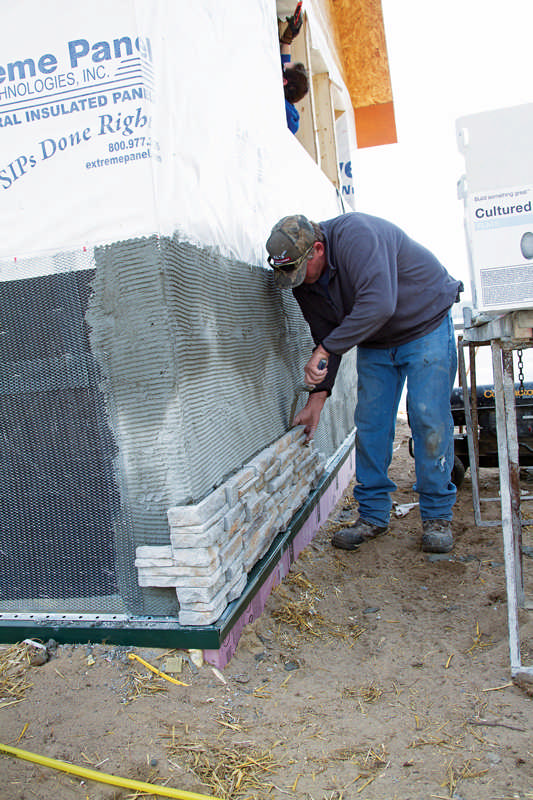 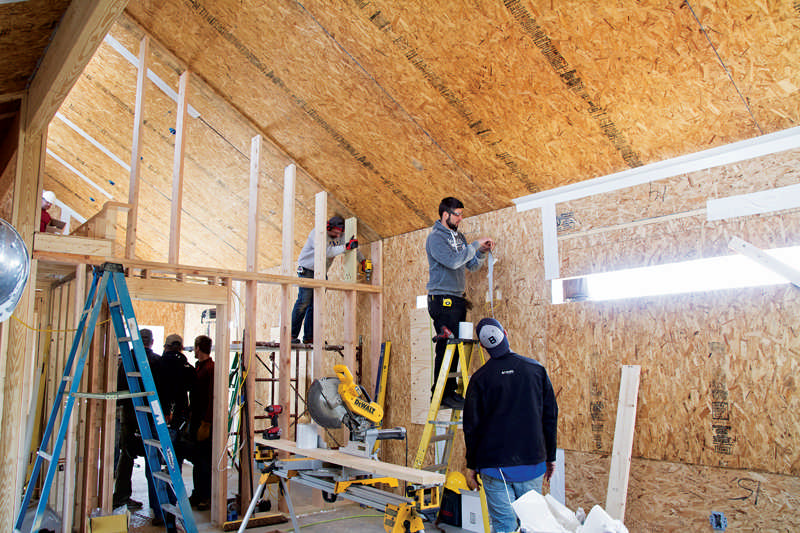 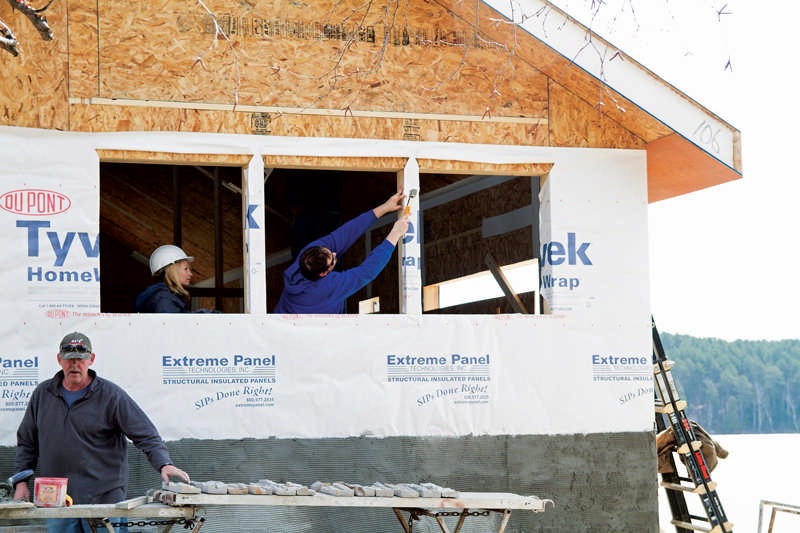 While one crew wraps the exterior in protective barrier sheeting, the stone installer lays out his materials. 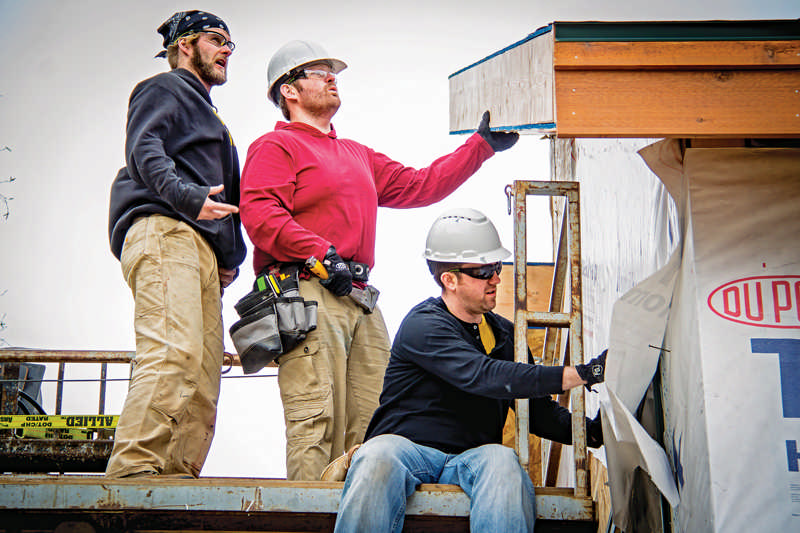 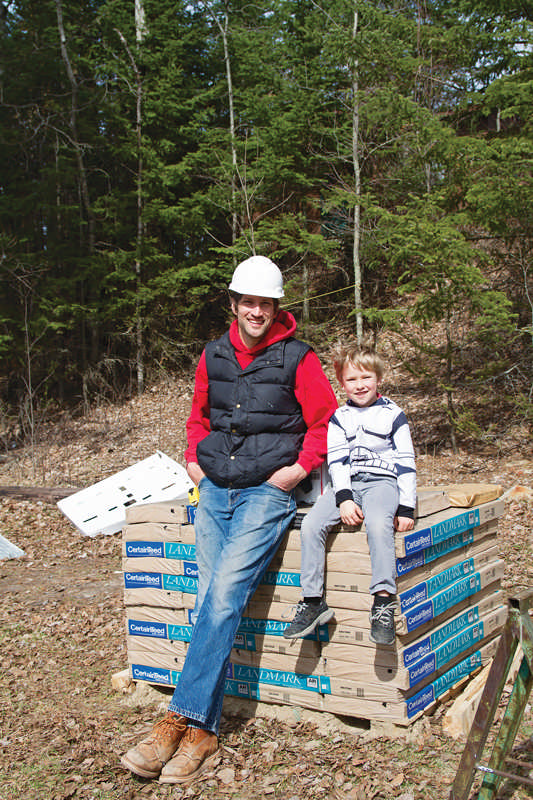 A father and son team up on the work site.
Bluewater Covenant Bible Camp has been in existence since 1967. When Persons joined the staff in 2004, it was a small, seasonal camp. Then in 2006, he became director and decided to broaden the camp’s size and scope. He started by adding a dining hall and expanding the kitchen. He knew just who to turn to get it done – Mike, owner of Wilkus Architects. Not only did Mike and his staff help with these buildings but they also did site planning, created a map of the camp and designed other buildings on the property. In the spring of 2015, Persons recognized the need for a main point of entry where campers could check in upon arrival and get their cabin assignments. He also wanted to include a first aid station, gift shop and small office space. By this point, Matt had joined Wilkus Architects as a project manager. The Wilkus’ designed a 750-square-foot Welcome Center that included clerestory windows that offered plenty of natural sunlight but still blended in with the older bunk houses on the property that were erected decades earlier.

Persons consulted with builders Nick Schrapp, Nate Rude and Tony Gustafson who suggested he use innovative pre-manufactured SIPs (Structured Insulated Panels), a high-performing, energy-saving way to build and insulate a structure. Because the SIPs can be erected quickly – in just a few days’ time, even – Schrapp suggested Persons recruit volunteers for a frenzied but fun four-day “blitz build.” Persons hoped that volunteers would be more willing to commit to a single chunk of time rather than returning again and again over a two-month period. “Think of the “Home Makeover” television show – that’s basically what we did,” explains Persons, who live streamed the entire event on the camp website so that the community could witness the hourly progress as it was occurring. 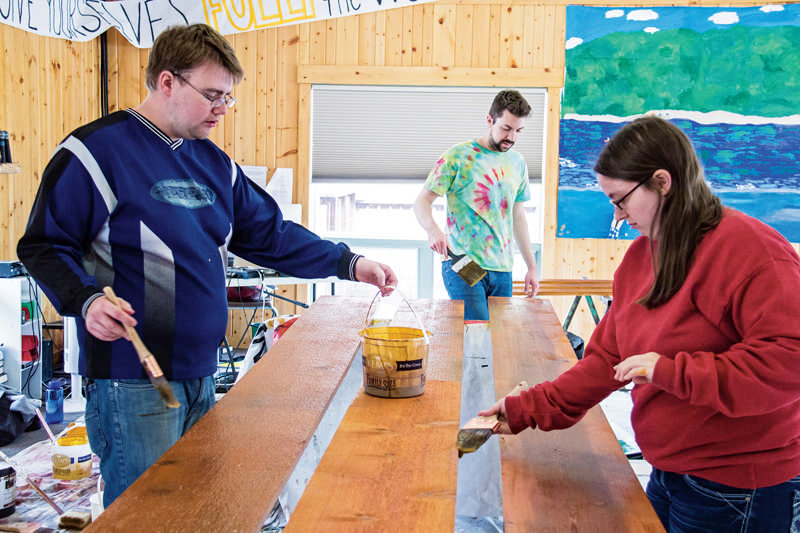 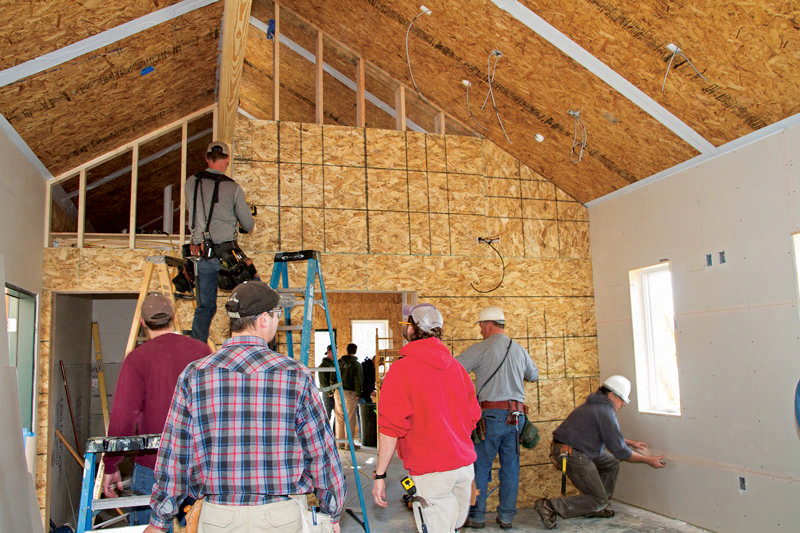 A large interior crew is busy on day three, from floor to ceiling. 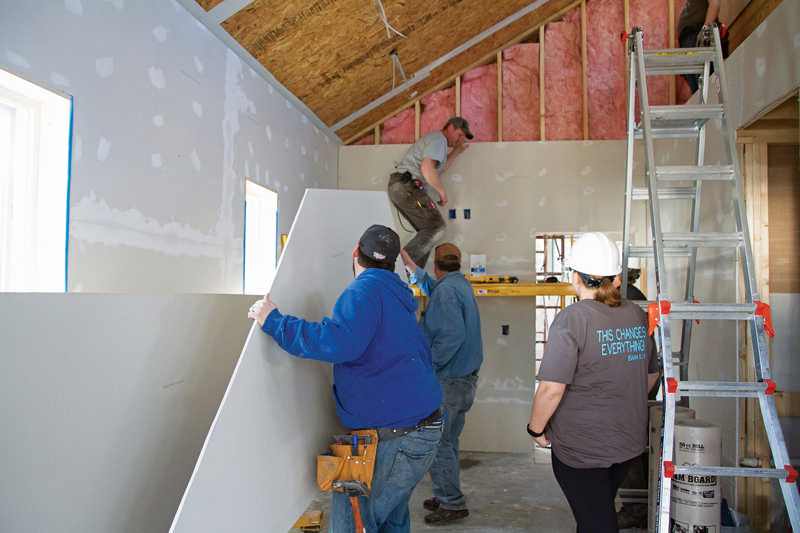 As word about this “modern-day barn raising” spread around the community, several cabin owners on the Wabana Chain of Lakes offered their services, as well as the BCBC-affiliated churches. In addition, about a dozen people from the neighboring town of Grand Rapids volunteered. Some people signed up ahead of time. Others stopped in on the fly. 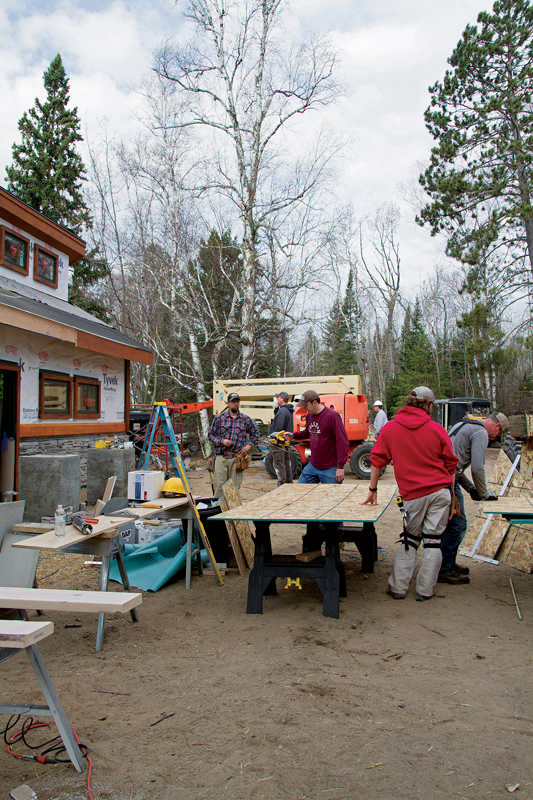 Siding installation on day three.
“One of the greatest surprises was when 11 people from the Wilkus Architects firm showed up,” says Persons. “It was special because they not only provided us with drawings and plans but they also brought a crew of people to help make those drawings materialize.” Ultimately, over 50 volunteers worked in shifts, round the clock, for four days straight to erect the Welcome Center. One might think of the project in terms of a relay race. The next available crew waited to be called upon and then hit the ground running the moment they were tagged in. Though meals were served at 6 a.m., noon, and 6 p.m., teams only stopped to eat at good breaking points. In addition, although construction continued throughout the night, a retreat center remained a quiet zone where weary workers could catch a quick cat nap.

The Wilkus family was eager to help their cabin neighbors, as they have long been devoted to improving the Wabana Township community. For instance, Matt and Ryan, both Eagle Scouts, chose Eagle culmination service projects that enriched the area. Matt built and stained seven cedar picnic tables and benches for the town hall pavilion. Ryan constructed an outhouse and changing room for the beach section of the local park. For both projects, the boys brought their troops up to the cabin to assist with the work. They all camped out on the Wilkus’ cabin property throughout the duration of their projects. Persons was not surprised at Matt and Ryan’s desire to contribute to the community considering the parents who raised them. “Mike is one of the most compassionate, giving men I’ve ever met in my life,” says Persons, who is also grateful to the dozens of other volunteers who made the Welcome Center a reality. Persons suspects that one reason folks in the area backed the Welcome Center project is because the Bible Camp, like the cabin, is a gathering spot for making new friends, bonding through shared activities and reconnecting year after year. “It’s about people coming together from different walks of life, forming enduring relationships and making special memories,” says Persons. “Cabin people relate to that notion beautifully because that’s what cabin living is all about.”

Daily Goals for the Build 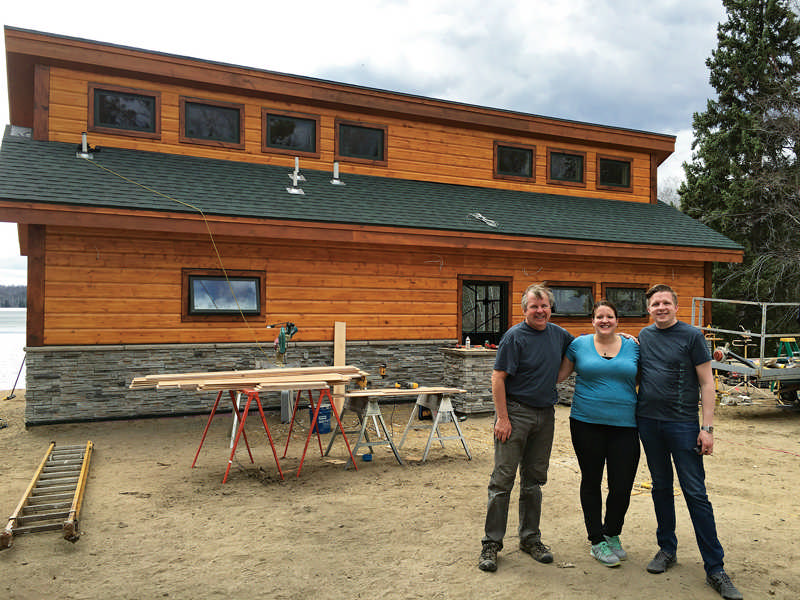 On the day after the three-day blitz build, three members of the Wilkus family stop by to check out the finished Welcome Center that they helped build. On the left is Mike Wilkus, who – with his wife, Barb – owns a neighboring cabin and is also the principal of Wilkus Architects, the firm that drew up plans for the Welcome Center. Next to Mike are his son Matt and daughter-in-law Lindsey. 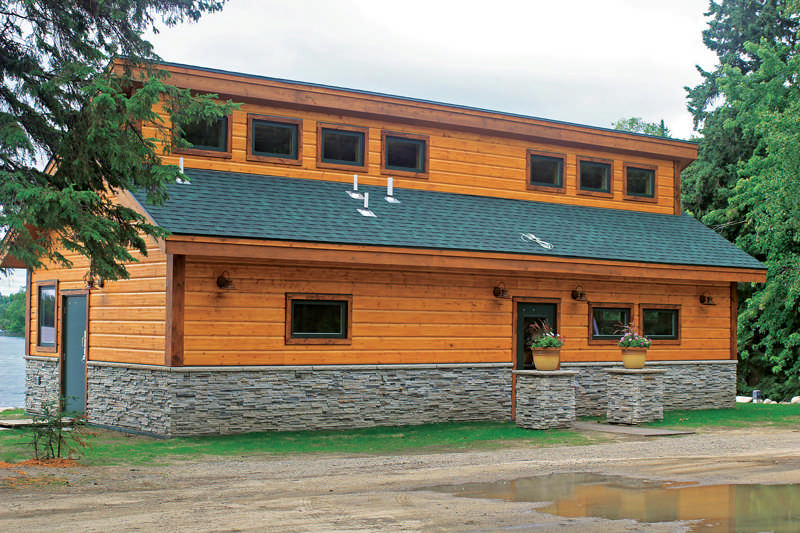 Bluewater Blitz Build by The Numbers

Dollars Spent on Food to Feed the Volunteers: 3,000

Days It Rained During the Build: 0 (woo hoo!)