Building on a Budget

Our Best Ideas for Building on a Budget

Here are our top tips for saving money when building or renovating your dream cabin. 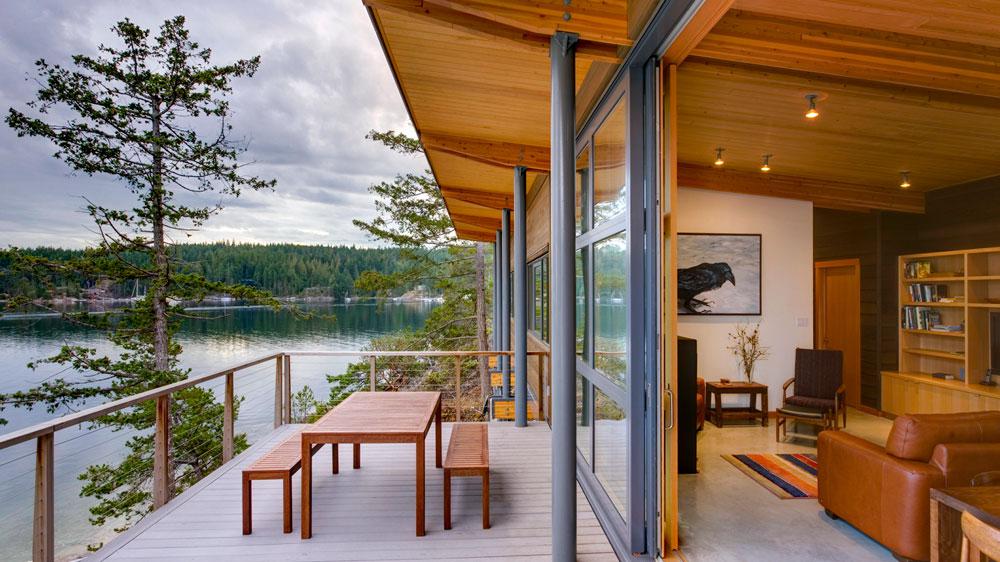 Photo by Steve Keating, courtesy Balance Architects/Seattle
Everyone knows that when you’re building or renovating a cabin, you should have a carefully devised financial plan. But planning your retreat becomes especially crucial when funds are limited.
The most important factor is something integral to any important relationship: communication with your builder and architect.
“It’s a personal relationship,” says Cordelia Pitman, an architect who is the director of preconstruction services at Wright-Ryan Construction in Portland, Maine. “Most issues come from lack of communication or lack of understanding.”

First, be clear with yourself.

Before you can articulate to a builder or architect what you have in mind for your cabin, it must be clear to you first.
Collect pictures from magazines, even show the design professionals knobs or paint colors you’ve chosen. Show your landscape architect the gardens and plants you admire. If you have a fat binder of ideas, you may want to cull it to a manageable thickness, Pitman says.
But taken together, the choices you’ve made help demonstrate your taste. “A lot of times, as a designer, you can flip through people’s choices and get a sense of what people like,” says registered landscape architect Marci Camacho, who has worked on various public, private and commercial projects in the San Francisco Bay Area. “Then you can work with shape, colors, textures. You can do something that gives the home a similar flair without using the most expensive materials.” 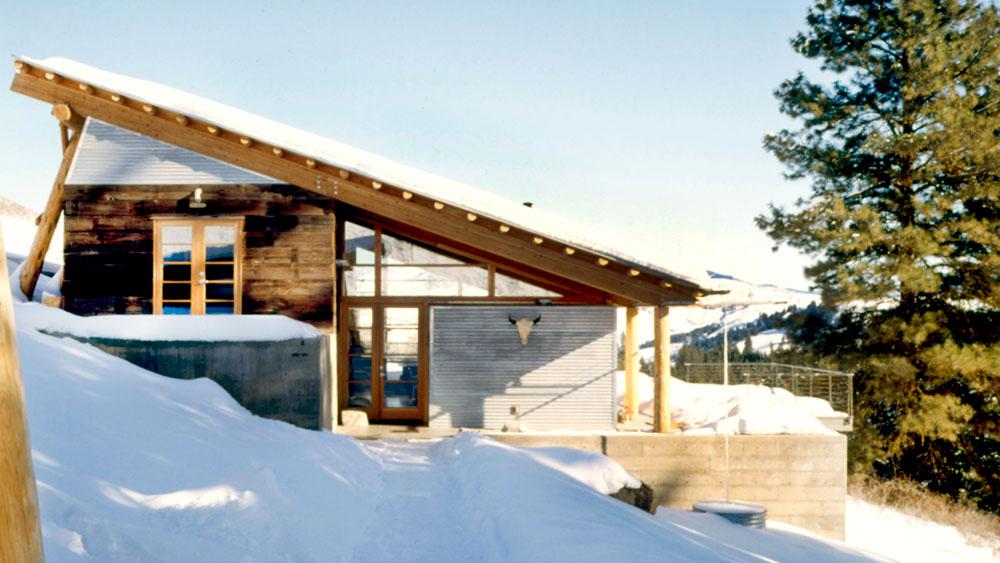 Think about how you live.

Builders and architects have distinct expertise that comes from education and professional experience, but you are the best expert on your own taste, and how you live in and use your cabin, Pitman says. Think about how you will be using the space, now and in the future. For example:
“Some people like being told what they need, while other people have their own ideas or are more collaborative,” Camacho says. “It’s key to find a trustworthy person to help. But so much depends on the client, what they want. After all, they’re the ones who are going to live there.”

When your budget has only a little wiggle room, references are especially critical. Talk to friends and neighbors who have hired builders and architects, and call – really do call – the references of anyone you might hire. Find out what homeowners liked and did not like about the professionals on your list. Ask specifically about how well they kept to the budget.
“We try to find out early on what somebody needs,” says Greg Shaw, owner of Shaw Building & Design in Stoughton, Wis. “We work on a strictly percentage basis and we show all the numbers. When we do our due diligence, we can get pretty hard numbers. One of the things we take pride in is to be accurate with our prices.”
Cabins in particular often have special needs, like drilling a well. Even without knowing the exact requirements before breaking ground, Shaw consults well drillers in an area to find out what wells there tend to require.
“When it’s all said and done, we tend to come out about 2% under our estimates,” Shaw claims.
The more details you can get about your job, the more accurate your builder can be when they bid on your project. Get at least three bids and look carefully at each one.
“The better the drawings, the more easily the contractors can bid,” Camacho says. “If you get three bids and they are all fairly close to each other, you probably have a good sense of the costs. If you have numbers that are really high from one, ask them why. You need to understand.” 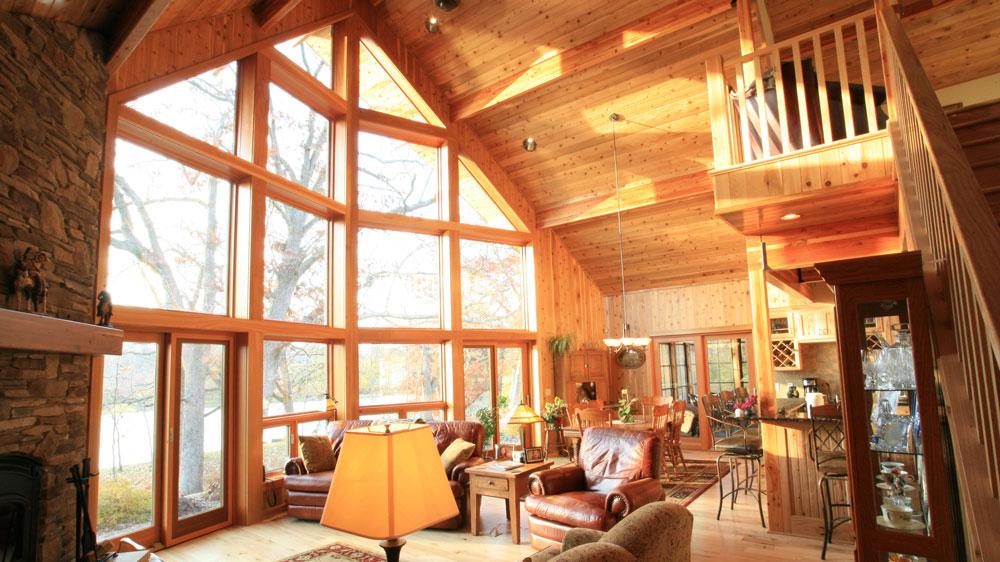 The lowest bid may not save the most money.

In fact, those types of fact-finding questions may be critical if you want to avoid budget creep, because very often the lowest bid is not the biggest money saver in the long run. Many building professionals have their own process, through meetings and questionnaires, for example, for establishing a homeowner’s expectations about what their cabin build or renovation should be.

“Budgets are so important, and people need to know what will happen,” Camacho says. “I have found personally that the high guy is often the more accurate one. Otherwise, you pick the low bid because you think you can’t afford it. Then the project happens and you’re almost held hostage.”
Most reputable architects and builders have a system in place to establish good communication up front.

“When it comes to budgeting and managing early expectations, we typically walk clients through a variety of past projects on our website,” says Dan Temple of Balance Associates Architects in Seattle, Wash., which has designed several homes and cabins in the Pacific Northwest. “That lets them visualize how budget starts to relate to detail, size, features,” Temple says. “We also have a variety of in-house budgeting tools that allow us to run through some design scenarios fairly quickly.”
Similarly, Shaw’s firm gives potential clients a wish list planner. They also take clients to the site to decide on details like locations of switches and ways to eliminate wasted space and maximize closet and other storage areas.
Most budget problems come from a lack of communication from one side or the other, Pitman says. “Don’t be afraid to ask questions. It will be good for everybody,” she says. 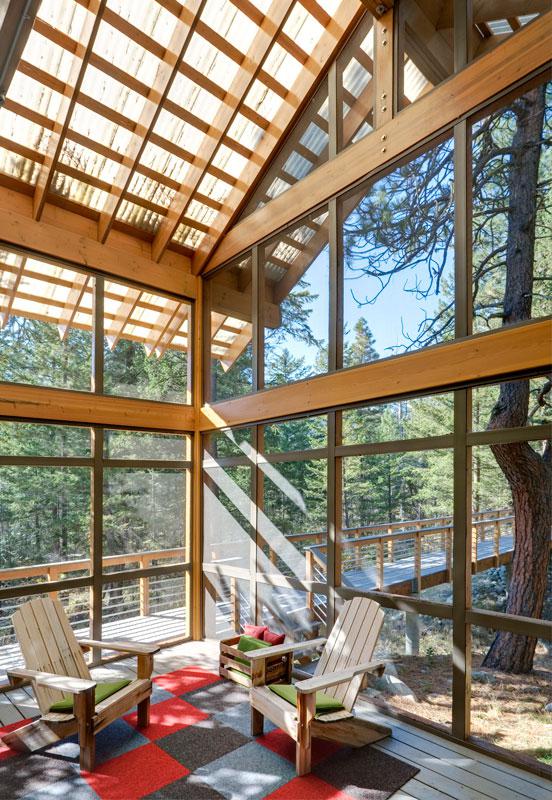 Investment up front, save later.

Greg Shaw knows first hand that spending more up front on some details can save money in the long run. Although he had requested a more expensive electrical panel for a home he was building for himself, the electrician installed a cheaper option. A few years later, Shaw was paying all over again when he had to upgrade the panel so it could accommodate the power needs of a new shop he was putting in.
“It’s a challenge,” Shaw says. He has many experiences with potential customers telling him another builder has offered a lower cost. “We have seen so often that there are corners cut where there will actually be significant costs down the road.”
That can be especially true after failed attempts by DIYers to save money. As a landscape architect, Camacho is used to saving her clients money by relinquishing certain tasks like maintenance, painting and mulching to the homeowner, and usually without negative consequence. But builders are more likely to have to come in to fix  “DIY” mistakes, Shaw says.

Among the best building investments are those that will make the cabin or home more energy efficient. Shaw’s company specializes in designing and building homes for maximum efficiency, and he is seeing greater demand for that.

“Many builders want to build the way they’ve always built. But, we’re seeing that people are trying to cut utility costs because it’s something that’s not going away,” Shaw says. “Air sealing is especially important –getting the home extremely airtight with mechanical ventilation so it’s got fresh air and it’s healthy to live in. It’s cheaper to heat and cool and it’s actually healthier to live that way because mold won’t be growing.”
The more interested you are in having an energy-efficient home, the more you must find a builder – and an architect – that understands what must be factored in to the budget and the plans. “If the architect doesn’t move the concrete walls to accommodate that two inches of insulation, it has to be re-drawn,” Shaw says. “Some architects are not up on the new building practices. You’re paying the architect by the hour, and the homeowner will have to pay for that.”
With a cabin, which is often a second home, that can be especially true, Temple says. “When it comes to sustainability, we try to establish what the clients’ values and goals are,” he says. “Often durability and sustainability go hand in hand, and with a second home, often in a remote location, it starts to make a lot of sense.” 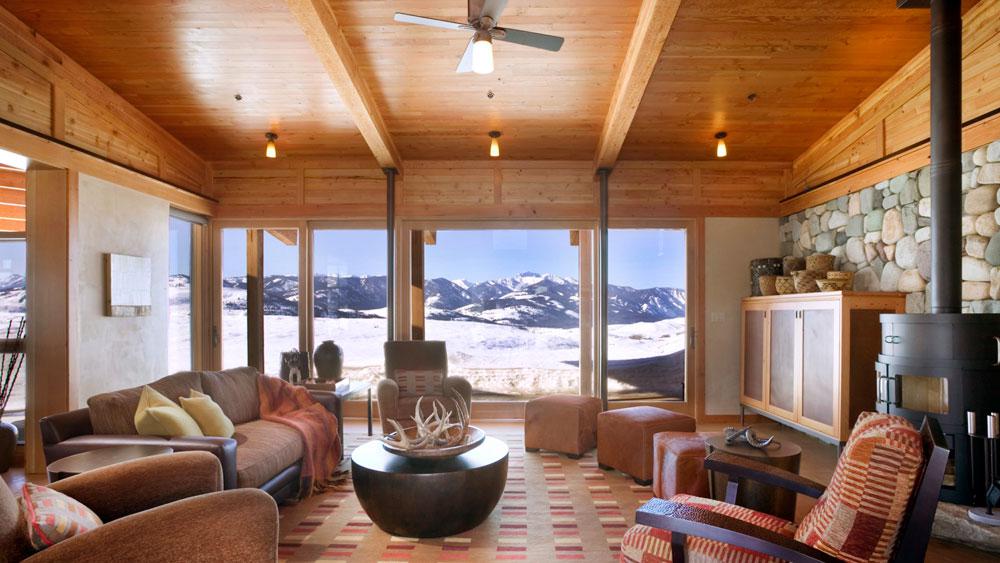 Finding alternatives can save you money.

Some cheaper building materials don’t actually save money in the long run. Most builders and homeowners alike now believe that vinyl windows, for example, have a short lifespan and will quickly need replacing, especially in areas with more severe weather. But windows in general add expense for a number of reasons, Temple says.
“They cost about five times as much as a wall, and there are structural issues and therefore greater costs that arise when a simple wall becomes a non-weight-bearing glass curtain wall,” he says.
Still, there are ways to save money by making certain choices. While vinyl windows may rarely be the answer, there are high-quality windows in a range of prices, Shaw says. “Maybe you wanted Marvin windows, but could put in Andersen to save some money,” he says. When adding airtight sealing, “maybe put in one inch of foam on the outside of the concrete walls instead of two.”
The first question may be: What do you really need? “It depends on how important some of the details are to you,” Camacho says. “How important are the windows or doors? Are you going to be happy if you get something at a big box store? Or should you build smaller so you can get better windows and doors? A lot of it is trade-offs.”
Still, because there are so many fixed costs (e.g., excavating, constructing the foundation, roughing in the plumbing, electrical and HVAC systems), building a smaller cabin may not result in the level of savings you might expect, Temple says. 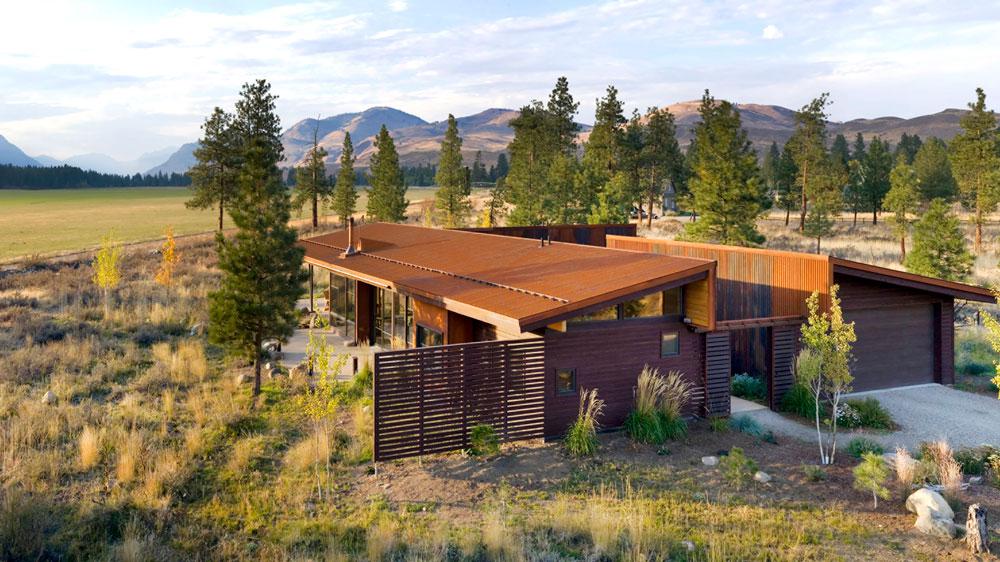 Phase in some details later.

Certain elements of a new cabin building or renovation project could be planned out, but built in stages. “If people can’t afford the cabin that they want right now, we could build it in a way to add to it at a later date,” Shaw says. “As long as you plan ahead, it’s not hard to set up a house to be added on to, and have it look all along that it’s always been designed that way.”
A garage is something that can be designed initially, but, as a lower priority, can be built later, when the budget allows, Temple says.

Landscaping is an area that is especially conducive to finding alternative materials and to planning and building in stages. For example, mulch can be used to fill in paths, with a plan to install stone or bricks later.
“There are lots of good-looking mulches, with different colors,” Camacho says. “Later on I can put on a fancier path, like hand-set stone paving. When you have the money, you can upgrade, but in the meantime the design’s there and usable.”
Planning out gardens for low-cost, DIY maintenance should be done early on, says Camacho. “You can space plants so they can grow out [to be shoulder to shoulder], so in a few years you don’t have a maintenance problem. If you have kids and are going to have tough use on the lawn, plan an area for that. Also, for the first year, make sure the plants get watered carefully, and after that you can start backing off.”
The overall design of landscaping can be more spare, which can be aesthetically pleasing, but less expensive to put in and, later, to maintain, Camacho says. For a cabin, a less heavily designed look may make more sense anyway. “You don’t have to plant every square inch of a property any more,” she says. “I like space.”

Daphne Howland is a freelance writer based in Portland, Maine, who has often thought she would eventually like a fancier path.
★