What It's Like to Evacuate Your Cabin During a Fire

Reflections on a Summer (and Fall) of Fire

Cabin owner and enthusiast Jana Studelska reflects on the heartache of evacuating her Minnesota cabin during a harrowing wildfire season. 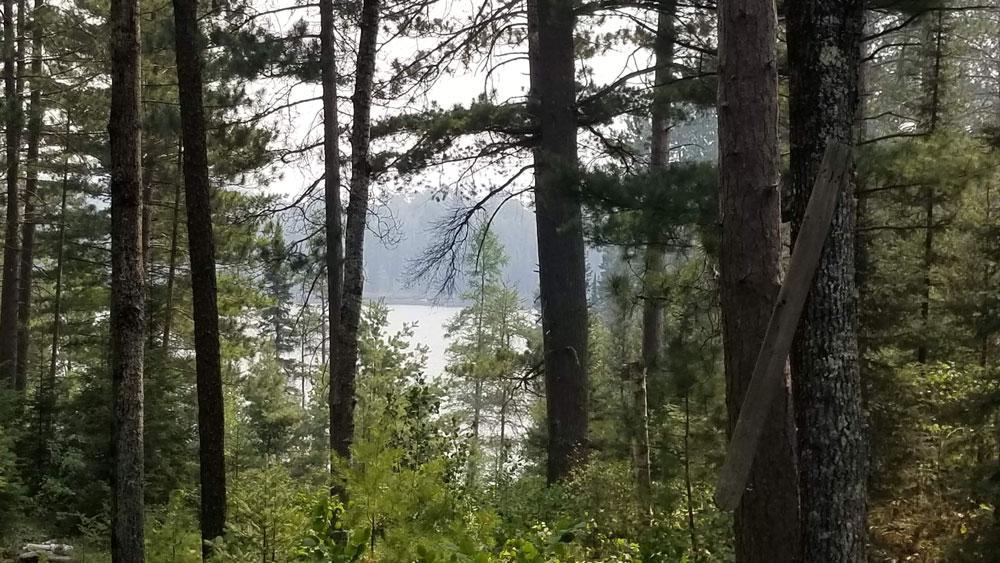 Soon after we arrived at our remote cabin last spring, the fire season began. I was still wearing fleece and wool when I stepped outside and instantly smelled smoke not of my own chimney. It was enough to warrant a phone call. A woman at the Superior National Forest Ranger Station told me, “Well, that’s Canada burning.” And that’s how the summer season started.

I’ve owned this little cabin in the woods for eight years. It sits on a 17-acre bog lake, surrounded by towering pines and rocky outcroppings. It’s so far back in the woods that it sat on the market for two years before they found someone like me who would summon up the courage to buy it. It’s an hour drive to pick up a dozen eggs. We bring our own water in, we heat with wood and we light up with solar and generator electricity.

Where I am, in far northern Minnesota, the map is thick with state and national forests, then capped off by America’s most-used wilderness, the Boundary Waters Canoe Area. We are no strangers to fire. It’s the nature of what we love: dense boreal forests of white pine, spruce and birch–a forest dependent on periodic fire and deep winters of -30 degrees. But this season was different.

Even before the trees leafed, while we were still building fires in the wood stove, the Weather Service was issuing “Severe Fire Conditions” warnings. In early June, it soared to the 90s before the water was warm enough to swim in. By July, skies were milky white every day, as if we lived in a smoke dome. Fire bans unrolled until even using our charcoal grill was prohibited.


And then in August, it happened. A series of days with splatters of rain. It was so delightful to smell water, to feel the forest gulp, to wash off the dust. But the lovely thunder in the distance was surely tossing lightning. And sure enough, two days later, five miles to our south, a fire began showing itself.


I found out when my neighbor, two miles away as the crow flies, texted me. “It’s GO time,” he wrote. He began evacuating his family and their 100 sled dogs. Before my partner and I could discuss who would stuff the cat into the carrier, two deputies appeared with a red evacuation notice that was promptly attached to our door. 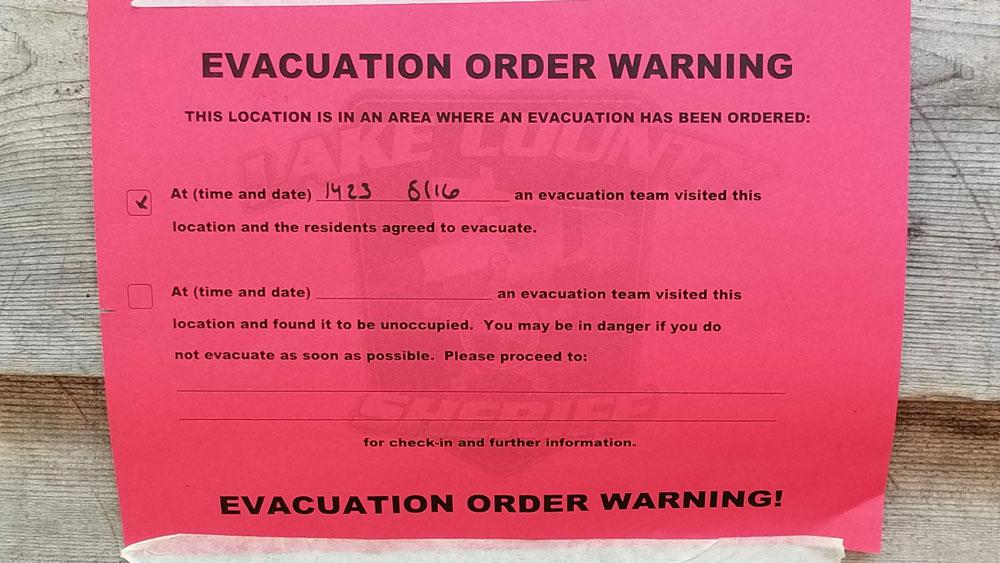 It was a relief, actually. We felt ready to go. Which is not to say that we were ready. What I want to say is that we felt anxious, uncomfortable and glad to be asked to leave. But we were not by any means packed or prepared.

There is a distinct surrealness as we talk and pack that goes like this: Should we bring all the garbage out with us? Will we be back here in just a few days? Are we ever coming back? Why not just leave the garbage? But we were optimists; we brought the garbage.

On the drive out, we began saying a thousand little goodbyes. It’s a very peculiar grief, saying goodbye to one thing, and then another and then another, as you think of what you left. To the raven feathers in a pile on the desk, to the carved snowy owl that hangs in the corner, to the really good cooking pan just purchased.

In a clearcut, large equipment blocking the road stopped us–giant earthmovers, dozers and a hive of pick-up trucks unloading gear. We watched as they scraped the earth down to rock, making a firebreak. We could see smoke moving across the treetops, billowing to the south. Finally, I started to cry. By the time we passed the main roadblock and waved goodbye out the window to the workers putting up barriers, I was sobbing.


After a few days with friends in town, we realized that we weren’t going to go back to the cabin anytime soon, so we drove home to St. Paul. The fire, visible 30 miles away in Ely, erupted into a Type II National Incident, bringing in spectacular airpower and several hundred firefighters. It very much felt and looked like a war. Britton’s Cafe shut down to the public so it could focus exclusively on feeding firefighters. The air hummed with float planes. I called my insurance agent from the car on the way south, just to assure myself and warn her. 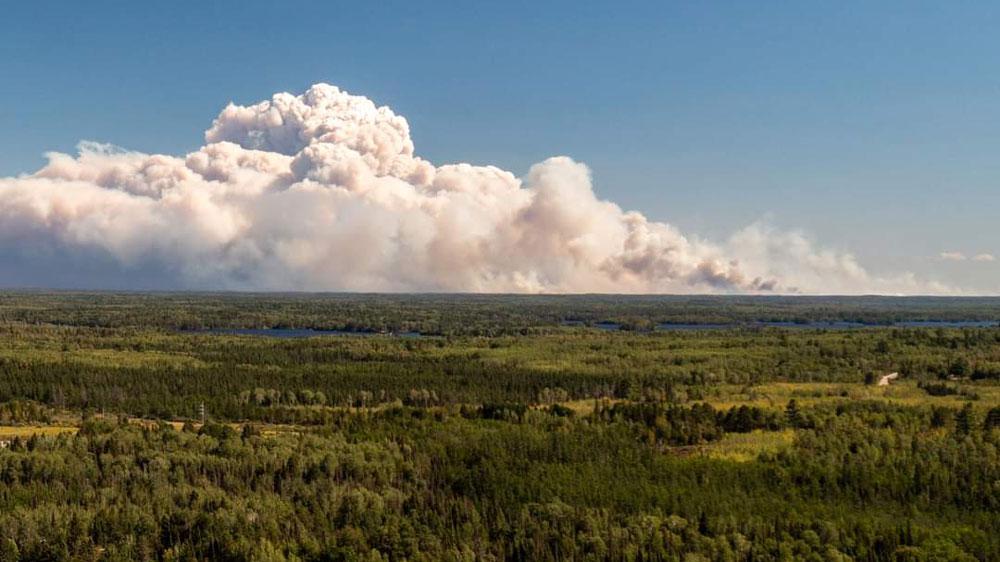 Facebook became the main channel of shared information. Before long, it became a national story. My phone lit up with texts and messages from friends as far away as England. The Forest Service did a great job of updating twice daily, then holding live-streamed briefings. Those of us who were evacuated chatted among ourselves, keeping each other both informed and positive.

It didn't go well the first week. In fact, the fire jumped a highway to the west before they even understood how big it really was. Then it made a four-mile run to the north. Nearly 50 miles away along Lake Superior’s north shore, ash started falling and the street lights went on at four in the afternoon. Then it exploded in size and developed a pyrocummulus cloud, making its own weather. The Forest Service posted that the fire jumped the northern boundary and all crews were called out.

My son called from the West Coast. Watching Facebook, he thought I could use the company. The fire was headed right for our cabin–less than 1.5 miles away with winds at 25mph. The pictures of a mushroom cloud of smoke, taken from a Forest Service airplane, made me nauseous.

And then, a miracle. By evening, a tired-looking Forest Service commander smiled into a camera and described how that fire just stopped. Crews put out a few spot fires, but mostly it just stopped. I wasn’t even near the fire, and I was exhausted.

In our fire, 12 cabins were lost, along with dozens of outbuildings. Those who still have cabins may wait weeks or months before they can return.

I have been invited to return, having been issued a pass by the sheriff's department. We will drive north through the forest we love and will have to witness her transformation–now blackened and reduced to the most fire-hardy species. It seems wrong to talk of it, but I am thinking of the blueberries that will grow in a few years’ time.

I know how fortunate I am. Ours was a small fire by comparison to those blazing across the West. Mine was a cabin, not a primary home. And it still stands. I didn’t have to keep saying goodbye.

But I think there’s more work ahead. We’ll be reevaluating our fire-readiness, and doing some more clearing to create a bigger ‘defendable space.’ But more importantly, we’re thinking about what matters–and it turns out it’s not much about stuff. When you love a place, what you love is the friends, the family and the memories. That was easy to pack. Saying goodbye over and over has transformed me a bit. I feel like I can love this place more fully, even while knowing we are always one lightning strike away from the next fire.
★