Why Northern Michigan Is a Must-Visit Destination for Cabin Lovers

This cabin connoisseur has traveled all over the world touring rustic getaways. Here's why her humble home state still takes top spot.

Marcus Trombetta's Michigan rental cabin
If you’re a cabin lover living in the United States, there are probably several places that come to mind when you think of famous cabin regions. Small towns of Tennessee, California and Colorado most likely make the list. One place that might not immediately come to mind is Michigan. I’m here to change that.

My name is Gina Valente, and I run a brand called Moody Cabin Girl. Through my blog and Instagram account I celebrate and share Midwestern cabin culture, with a heavy emphasis on Michigan. But through my travels, I have visited cabins all around the country and even the world. Hopping from Tennessee to Ohio to as far as Iceland, I’ve stayed in nearly 100 cabins, and it might surprise you to learn that my favorite cabin location is in my home state of Michigan.


As someone who writes about cabins as part of my job, I pay attention to what’s going on in the cabin world. I follow many famous cabin accounts on social media, and I read a heavy amount of cabin literature. I am always surprised by how little recognition Michigan receives when it comes to cabin tourism. For one, when non-Michiganders think of the Wolverine state, they often drum up images of Detroit. And although Detroit has been undergoing quite the renaissance in the last decade, it's not quite thought of as a vacation destination. But Michigan is so much more than the best-known city, and folks are starting to find that out.
The tourism campaign “Pure Michigan” has done a lot to prove this. With the Pure Michigan campaign, motorists are greeted with giant billboards along highways and interstates showcasing beautiful photos of Michigan lakes and other recreational opportunities. Videos and ads appear in print and online across the nation. Suddenly, millions of people began to take notice of the Mitten State.
The advent of rental platforms like Airbnb has vastly expanded the inventory of cabins available to rent in Michigan. According to MLive, Michigan houses nearly 4,900 “hosts” on Airbnb alone. With the many avenues available to hosts, cabin rental options have skyrocketed in Michigan. 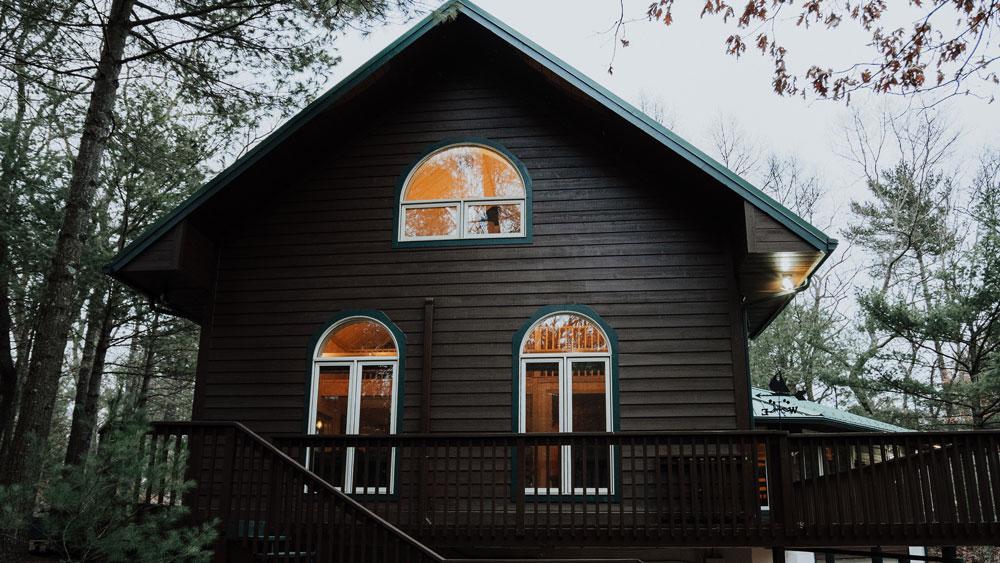 
In researching this piece, I reached out to several cabin owners to get their perspective on the topic. Airbnb host Marissa DeBruyn owns and rents out a charming cabin in Pentwater, Michigan. Marissa has traveled all over the world, but when it came time to choose a location to buy her own cabin, she knew it had to be Michigan.
She wrote to me, “I grew up in Michigan exploring the pine trees, sand dunes and beaches - always counting down the days until I’d be back Up North again to Lake Michigan. There’s something magical about Up North in Michigan…that feeling when the weather turns from snow and ice, to when you can walk outside in just a sweatshirt, taking in a deep breath of crisp fresh air. You smell nature. You see everything budding and coming back to life with all the green hues returning. We all come out of hiding and prepare for the incredible warmth that summer brings.”

Marisssa mentions “Up North” in her explanation. But what exactly is "Up North"? It's a phrase Michiganders throw around when talking about their vacation cabins. I spoke to another cabin host, Marcus Trombetta. Marcus has also lived in various places throughout the country, but recently designed and built a cabin in Glen Arbor, Michigan. Trombetta explained to me “My non-Michigan family likes to ask, ‘where is Up North? Like how far north of Detroit or Lansing or Grand Rapids do you have to be to be considered Up North?’ And it’s a trick question, because it is not actually a location, it’s a state of mind.”

I completely agree with Marcus’ description. But formally, Northern Michigan, or Up North rather, can be used for anything north of Detroit, though the heart of the matter isn’t really that definitive. Up North is the spot where metro-Detroiters have bought property to spend their summers and escape the grind of the 9-to-5 work week. It’s where they spend quality time with loved ones and get outside to enjoy one of the 11,000 lakes of the state, or perhaps hike in one of the forests. Afterall, 53% of the state is covered in trees. And this concept of buying a little piece of land and building a place to call your own to relax has created a special kind of culture.

Trombetta describes this phenomenon: “My family had a cabin when I was growing up, it was more of a little shack on a small lake. We all called it 'the cottage.' So much of my childhood was spent there, and so much of our time away from the cottage was spent in preparation or anticipation of being at the cottage. I think that was true for a lot of other families in the area I grew up (the blue collar suburbs of Detroit). It was rather common for normal middle class families to keep a second home 'Up North.' I’m not sure it is as common in other regions in the county. There are probably many factors that play into it — certainly things like Union wages and property values/property taxes. The place I have now is far from a shack, but looking back at summers at 'the cottage' was a huge influence in wanting to build a cabin Up North.”

While city folks were building cabin communities in northern Michigan, tiny towns were built up around them. These towns still stand today, many of them seasonal for the most part, staying busy in the summers and closing down in the winters. These little cities often have old-fashioned ice cream parlors, kitsch miniature golf courses and mom-and-pop diners. You feel like you’ve stepped back in time when you visit these spots. Things move a little slower. People are friendly. Personally, these towns are one of the reasons I’m drawn to Michigan as a cabin destination. I love spending time at cabins, but you better believe I’ll be using my afternoons to explore the local businesses, walk the beaches and meet the locals. It’s this small town feeling that I just can’t get enough of.


So while there are many beloved cabin-centric locales throughout the U.S., I hope Michigan begins to rank among them. Next time you’re contemplating where to book a cabin adventure, consider one of the abundant reasons Michigan is special. You could be staying in a piece of history, a special place that a family enjoyed for decades. You could be enjoying Northern Michigan and exploring its many attributes. Or you could be experiencing a small Michigan town, buying an ice cream cone and chatting with a local. When the time comes, we will welcome you with open arms!
Gina Valente lives in Ferndale, Michigan and runs the cabin blog, Moody Cabin Girl. She has a love for unique dwellings, adventures, and all things whimsical. When not running around renting cabins, she is trying new restaurants in the Detroit area and posting about them on her Instagram account, Girls Gone Hungry .
★