For these two nature lovers stuck in the big city, a cabin in the mountains of New Hampshire was just the fix. There’s a stepped window package on each end of the house. The front view is of Sugar Hill and the back looks out to the White Mountain National Forest and Mittersill Ridge. The couple enjoy the best fresh tap water, they say, from their property’s natural artesian well. The cabin’s front porch is a perfect resting spot after a day of activity in the nearby National Forest. It offers a spectacular view of Sugar Hill in the Franconia, N.H., range and the distant mountains of Vermont. 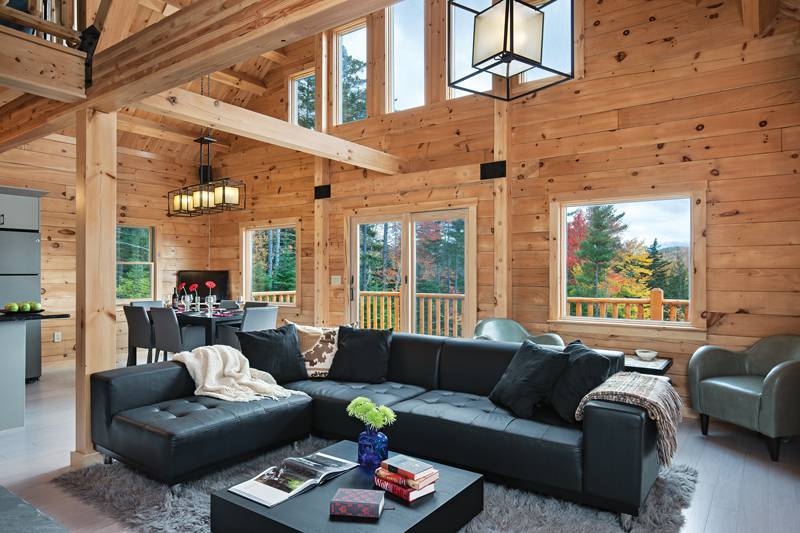 The living room is a perfect place to relax in front of a fire, drink a glass of wine, read, talk and hang out. The exposed beams and metal connectors are part of the hybrid design the couple chose – mixing Craftsman details with the Tradesman Series package. The large fireplace is a central interior focus, which allows for more windows on exterior walls. The stone veneer is dry stack from Heritage Stone and has no visible grout lines. A Morsø fireplace insert from Fireside Hearth and Home makes the fireplace an efficient heating system. In the main level’s open floor plan, flat-front Harbor Mist cabinets from Innermost line the modern kitchen. The couple loves that they were able to get a lot of cabinets into a small space. The solid oak dining table with a laminated coating (from Modani) echoes the polished black granite counters.

The reading nook outside the master bedroom on the loft level has a great interior and exterior view. The master bedroom in the loft features custom bed frames built by cabin owner Dave Hibler using beams from Coventry Log Homes. The stone behind the bed matches the stone in the fireplace. There’s a stepped window package on each end of the house. The front view is of Sugar Hill and the back looks out to the White Mountain National Forest and Mittersill Ridge. The couple enjoy the best fresh tap water, they say, from their property’s natural artesian well.

Only graduate school could make Melanie Hibbert and her husband Dave Hibler – who met in rural Alaska and got engaged in Iceland – land in Manhattan. But the pull of the outdoors is strong; once inside you, it’s hard to ignore. “I need a ‘Forest Bath,’” says Hibbert referring to a Japanese term (shinrin-yoku) that encourages people to engage in the restorative powers of the woods.

“You need to be in nature and cleanse your mind and reset,” she says.

There’s no better antidote for Big City life. Hibbert and Hibler spent several years looking for land in New Hampshire and Vermont. Hibler grew up in Lime, N.H. They looked at undeveloped properties and old fixer-upper farmhouses. Several purchase attempts fell through. Then they spotted an available three-acre parcel in Franconia, N.H., in the White Mountains. It was near Cannon Mountain ski resort and the scenic Kancamagus Highway where they like to bike. But best of all, the property borders national forest land “and is connected to an amazing trail system,” Hibbert says, where they regularly see moose, rabbits and foxes.

As renters in New York City – a two-bedroom, “practically the Taj Mahal [by Manhattan standards] but still pretty small,” Hibbert jokes – the couple was excited to create something of their own. 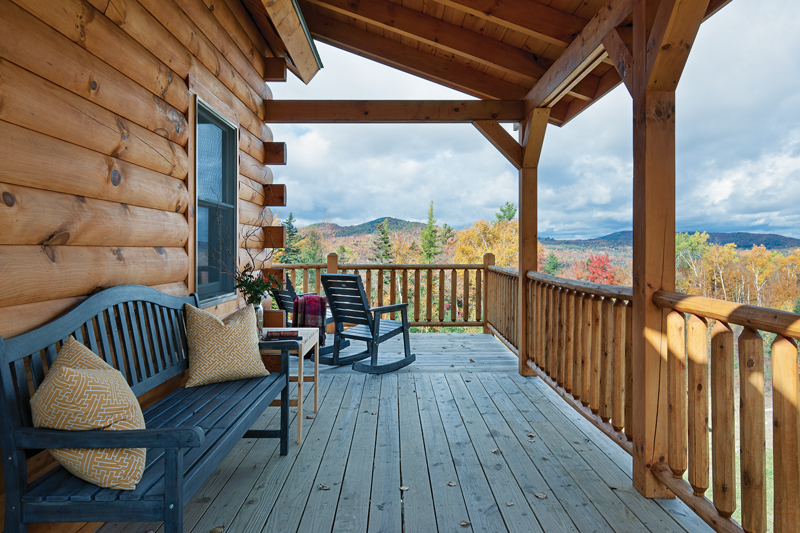 At first, Hibler, who has done some interior finishing work, “thought it might be a cool undertaking” to build the cabin themselves, but they couldn’t get a construction loan without a certified builder on board. They knew they wanted a log cabin and “we liked the idea of a self-contained package,” he says. Hibbert’s parents – her father is from Laconia, N.H. – led them to Coventry Log Homes.

The couple liked Coventry’s online designs and chose the Oak Ridge model in the Tradesman series but wanted Craftsman touches like exposed purlins and beams with decorative plates and bolts for a more modern look.  Luckily, according to Coventry sales representative Richard Titorenko, “[Coventry does] hybrids all the time."

A large, stone fireplace was also important to them, Hibler says, as was a lot of natural light. They located the fireplace on the interior to allow for maximum windows on the exterior walls. They chose mirror images for the front and rear of the house incorporating a step-glass window package – with taller and shorter windows – on each end to maximize views and light.

The couple hired the father and son team of Joe & Shane Fiore Builders to build the cabin. “The biggest challenge was getting everything up the hill every day. When it would rain, it was a muddy mess,” says Joe Fiore, whose company builds custom homes. He helped the couple site the cabin for the best view of the mountain across Franconia Valley.

Hibler did some of the exterior stain work and is in the process of finishing the walk-out basement. He’s hoping to put a climbing wall in that lower level and had the Fiores build a higher ceiling to accommodate that.

For a year-round space it’s important the house be well insulated. “We did spray foam in the ceilings to get the R-42, and there’s insulated foundation block (R-50) in the basement walls,” Fiore says adding there are “two-foot by eight-foot Styrofoam blocks and two rows of rebar. It’s very sturdy, which makes [the house] cooler in the summer and warmer in the winter and very strong.”

The interior design is what sets this cabin apart from most. Traditionally, cabins don’t incorporate such a modern sensibility; they’re usually decorated with more rustic touches. “Although we’ve participated in hunting in Alaska, deer antlers and deer skins don’t reflect us,” says Hibbert, who designed the interior herself. “We like Scandinavian design. Iceland’s a little bit of inspiration as well.” 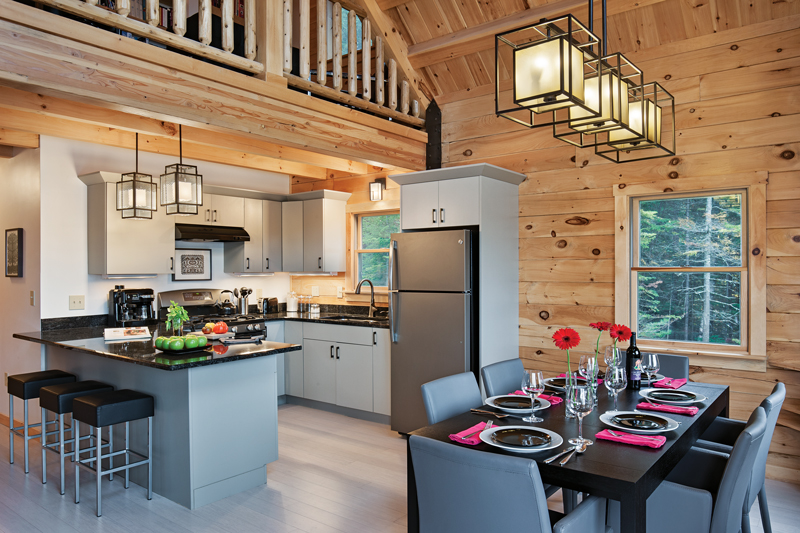 They chose the neutral colors and clean lines of white bamboo flooring on the main level and unfinished pine with a water-based stain upstairs; sleek black and gray leather furniture from Modani; white cabinets and black “galaxy pattern” granite countertops. Flat-front Harbor Mist cabinets from Innermost line the modern kitchen. The couple loves that they were able to get a lot of cabinets into a small space. The solid oak dining table with a laminated coating (from Modani) echoes the polished black granite counters.

For pops of color, Hibbert is in the process of buying pieces of hand-blown glass from Blenko, a 123-year old, family-owned company in West Virginia along with quilts, pitchers and vases, much of which she purchases at Just L in Littleton, N.H. But Hibbert doesn’t want to clutter the space with too many things. “I like minimalist design,” she says. The overall ambiance is calming. “It’s clean and not cluttered. If it’s a place you’re not in full-time, you don’t want it to be stressful when you’re there.”

Although the home is mainly used on weekends, Hibbert and Hibler dream about one day living in it full-time. “We want a house we can eventually move into without a crazy mortgage we can’t afford,” Hibler says. But they’re already making memories in it: Recently, they hosted Hibbert’s sister’s wedding, with the ceremony on the front deck. “It was an informal celebration; they had another ceremony abroad,” Hibbert says, “and my sister’s flowers included lupines and other local flowers. We cleared out all the furniture in the living room and had a fun dance party and set up a bonfire on the side of the house.”

So far the only stress might have been the day she stood ten feet from a black bear. “I was by myself hiking and walked back toward the house where the trail meets a clearing in our yard. It was a juvenile bear, and I saw it before it saw me,” Hibbert says. More amazed then scared, Hibbert backed away slowly. “[The bear] heard me and ran off.” Forest Bath, indeed.

See also: This Stone and Timber Structure Is Industrial-Modern Goals