How one New England couple built their dream cabin to be as energy efficient as possible. 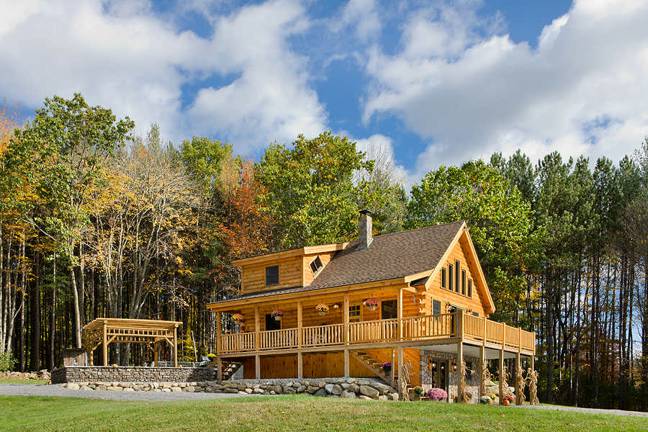 
Winter can give the Northeast a real jolt with record snowfalls and frigid temperatures. But Kym Smith and Wayne Carpenter stay comfortable in their log cabin all season burning just a cord of wood and using their radiant floor heat. “It’s been said that cabins can never get a good energy rating, but this home is one of the tightest buildings in the state of New Hampshire,” says Andy Kapchensky, owner of AK Construction in Lempster, New Hampshire, and the builder of the couple’s log cabin. The home was given a Five-Star Plus Energy Rating through the U.S. Environmental Protection Agency’s Energy Star program. Energy efficiency wasn’t the only reason Kym and Wayne couldn’t wait to move into their log home.
A New Lifestyle

Kym wanted more land to exercise her horses and had always wanted a log home. She and Wayne planned to purchase property where they would build a home and eventually retire. In 2011, the couple bought seven acres on a dead-end road with potential views of New Hampshire’s Sunapee ski area. They decided then and there to make the spot a full-time residence right away. They had the land cleared and purchased an Ascutney cabin model from Coventry Log Homes, a manufacturer based in Woodsville, New Hampshire. The couple worked with Coventry’s design staff to make a few modifications to the stock plan: They added more windows, expanded the kitchen and opened up the floor plan. And since they would live there full time, Kym says, “We wanted it to be as energy efficient as we could get it.” According to Richard Titorenko, a salesperson for Coventry Log Homes, all the company’s materials are “eligible to be five-star energy rated.” The logs are pre-cut, lettered and numbered at the factory and then taken to the site to be stacked into exterior walls. Kapchensky faced the house south for maximum sunlight and built it in six months. A deep open deck ringing the front and sides is perfect for entertaining. “It’s a great area where we can have a few people over and not worry about the neighbors,” says Kym, a competitive barrel racer who keeps a horse and mini-donkey in a barn on the property. The couple loves to hike, snowshoe, cross-country ski and walk their dogs in the nearby woods.


To get the energy efficiency they were looking for, Kapchensky made sure that areas where air can leak out or in—corners and between the logs—were sealed. “We did stick framing in the roof and we used a lot of spray foam in the corners, rafters and floor joists,” he says. The basement is built with reinforced ICF (insulated concrete forms)—basically 2 1/2-inch-thick styrofoam panels filled with concrete. “Then there’s an ice and water shield on the outside as added protection from critters,” he explains. The basement, like the rest of the home, has radiant heat floors, which are fueled by propane. According to the EPA, to achieve the highest energy rating, a new home has to have comprehensive air sealing, properly installed insulation, high-performance windows, a high-efficiency heating and cooling system, comprehensive water management system, and energy-efficient lighting and appliances. Kym and Wayne purchased Energy Star appliances, LED lighting and an air-exchange system. Because the house is so tight, the couple installed a heat recovery ventilator (HRV) in the basement to bring fresh air in from the outside. A Home Energy Rating Score (HERS) showed all the extra steps taken in construction paid off. The HERS index is a number between 0 and 100 that represents a home’s energy use compared to homes of similar size and shape that were built to the minimum energy code. For example, a home with an index of 80 means that it uses 80 percent of the energy consumed by a similar home built to minimum code. After a home is built, a third-party rater collects data from tests such as the blower door, which measures air infiltration, to come up with a rating. Kym and Wayne’s cabin was rated by the local utility company. “It came in at 47 and got a five-plus rating. We’re pretty proud of that,” Kapchensky says, adding that because the score was so good “the people who did the test thought their machine was broken.” Not only will the couple save energy and see savings on their utility bills, but they also received rebates.
See also: Designing For a Low Maintenance Home


For a home to be truly wonderful, it should be beautiful as well as functional. Kym and Wayne chose a knotty cedar for the interior of the pine log house. It makes a great contrast with the kitchen’s blackish granite counters and grey slate tile as well as the teak hardwood floors used in the rest of the home. The ever-practical Kym says the teak floors “are really durable for the dogs’ claws and work well with the radiant heat, which can fluctuate with the temperature and humidity.” The 24-by-32-foot home has two bedrooms: one up and one down. The master bedroom occupies the entire top floor and includes a walk-in closet and full bath. In the living room, Kym’s must-have was a stone chimney. The stone, purchased from a Vermont quarry, is from an old Calvin Coolidge home site. Both the living room and master bedroom have exposed beams for a timber frame touch. Now the horses, the dogs and their owners all have plenty of trails to roam as well as a cozy, warm home—or barn—to come home to. “It’s quiet and relaxing and the mountain views are phenomenal,” Kym says. What more could they ask for?