A Creekside Cottage for the Ages

A Creekside Cottage for the Ages

The descendant of the original owner buys it back, then builds a beautiful namesake. 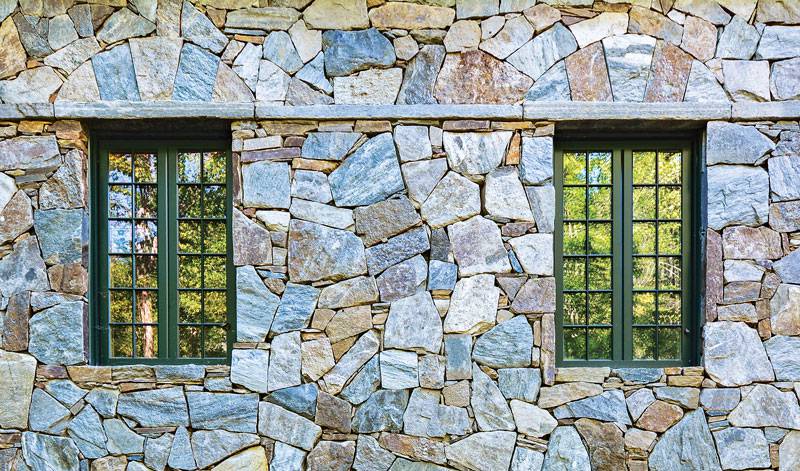 Hidden deep in the Pisgah National Forest of western North Carolina, this humble retreat was called the “Kibbin” because its owner’s youngest son, aged 3, could not pronounce “cabin.”
“In the 1930s, my grandfather, who was a judge in McDowell County, bought the land and some locally harvested timbers from a young mountain man, who planned to build a home for his fiancée,” says today’s homeowner, Larry. “She left him and went to California, so my grandfather took the land and the timbers off the young man’s hands for $50.00...
“We all have great family memories there,” Larry continues. “The mountain was very high, the creek was very cold. As kids, we played in that creek, tucked up against that mountain. My grandfather also used it as a connections place when he held ‘Kibbin parties.’ They became quite the tradition.”
But in 1971, over the objections of his grandchildren, the judge sold the one-story wood cabin. Its memories continued to resonate. When in 2011, the original Kibbin and 7 surrounding acres came up for sale, Larry – the judge’s grandson and an Atlanta attorney – was overjoyed. And Larry’s wife, Dana, an Atlanta financial management professional, was happy for her husband, and more than a little relieved that his long-held dream had come true. “For years, he would go by and leave his card in the door with a scribbled note asking for a call if they ever wanted to sell. The place has incredible meaning for him.”

Thrilling as it was to finally own the Kibbin, the place was falling down.  “There was no way to save it,” says John Altobello, a Cambridge, Mass., architect who came to know the homeowners when he designed houses for them in Atlanta and on Cape Cod. “They said, ‘Can we at least keep the site?’ So we set out to create a new Kibbin on the exact spot of the original.” However, it was not an easy building site, occupying a sliver of land wedged between the creek rushing downhill and the mountainside rising up behind it.
To fit the narrow lot, Altobello designed a 50x22-foot, two-story house that overlooks the creek. Crowned with a metal roof, its exterior is sheathed with stone from a local quarry. “They (the cabin owners) were inspired by Cotswold cottages when they traveled in England,” Altobello explains. “When we talked about the design, they sent me stacks of books with pictures of Cotswold stone houses. The stone on the Kibbin is, in fact, a face applied to a wood frame.”


To build against the steep wall of the mountainside, Altobello designed a hefty retaining wall. It forms the back of the structure on the lower level, “So that the mountain does not come sliding down into the water,” the architect says. “It was the most challenging aspect of the design: how to make the house fit with a 2-foot-thick retaining wall at ground level.”
“Even though it’s on 7 acres, most of that acreage is forested and set at a 50-plus-degree angle heading up to the ridgeline 170 feet above and behind the Kibbin,” Larry explains. “We are so tight against the mountain, that our builder, Larry Gibson of Clayton, GA., said that it was the hardest site he had ever worked with.” The lower floor of the 2,400-square-foot structure houses a bathroom, a bedroom and the utility areas. The main living space is on the upper level, where a vaulted great room encompasses a living room, a dining area and a kitchen arrayed against one long wall. Curved trusses designed by Altobello support the great volume of open space. Furnished with clean-lined, traditional furniture, the room is oriented towards a large fireplace and a chimney built of the same stone that forms the building’s exterior.

“I wanted a room where everyone would be together,” says Dana. “We all sit in that room, reading, talking.” At the fireplace end of the room, a Dutch door leads into a screened porch, a spacious indoor-outdoor room that is also oriented around a stone fireplace. The two fireplaces back up against each other and share the chimney. “We eat outside until it gets too cold,” Dana says. Also on this level is the master bedroom; a staircase climbs to loft bedrooms.


“At first, we talked about installing a spiral staircase,” Altobello says. “But we realized that it’s not so easy to negotiate circular stairs with a basket of laundry in your arms. Instead, we decided to make stairs that are an architectural element. They also balance the big stone fireplace opposite.” Altobello’s design places four tall windows on the great room walls. Additional light pours into the room via four skylights. “They line up with the big windows,” he points out. “Natural light is very important to that big living space. There are also windows above the fireplace. The shutters opening to the great room from the upstairs loft are left open during the day, bringing light into that area.”
Larry and Dana come here for weekends, vacation and holidays. “I love that it’s so remote; we have great family time here,” Dana says. Larry says that one of their year-round activities is to hike in the surrounding old-growth forest. “But our very favorite thing to do,” Larry adds with a smile, “is to sit on the porch and listen to the music of the creek.” Now that is the cabin lifestyle at its finest.

When building with stone, a naturally heavy material, it makes sense – both economically and environmentally – to find a source as local as possible. That is usually also the best aesthetic choice. Prominent Georgia landscape architect Edward Daugherty (his past projects include the grounds of Georgia’s Governor’s Mansion, the Atlanta Botanical Garden and the Georgia Institute of Technology) found the right stone for the Kibbin when he visited a botanical garden in Ashville, N.C.
“I saw a wall built of a very handsome local stone, and knew it would look just right,” he says. “Here in Atlanta, we refer to it as Stone Mountain Granite.” Table Rock Quarries of Marion, N.C., provided the lovely multicolor stone that sheathes the Kibbin and gives it its personality. Their name for this stone is Linville Blend. “The Linville Blend is actually a custom blend of three stones,” says Byron V. Boyd, one of the quarry’s owners. “Chocolate Gray and Pisgah Gray, both of which are mined from our own quarries off Cannon Road in central McDowell County, and Vanderbilt, which is mined just off Hooper’s Creek Road near Fletcher, N.C.”
He goes on to explain that the stone is not exactly granite. “The Chocolate Gray and Pisgah Gray are in the schist family, which is a rock of intermediate metamorphic grade between phyllite and granitic gneiss. The Vanderbilt leans more heavily towards the granitic gneiss.” By happy coincidence, Table Rock Quarries is only a stone’s throw from the Kibbin’s Old Fort location. Daugherty says that explains why the building’s exterior, which ranges through shades of cream, gray, ocher and blue, looks so beautifully at home. A locally quarried product will always look better than stone brought from a distance. Linville Blend also looks like the structure’s primary building material, not like the veneer it is. “It’s a wonderful, heavy stone, 6 to 8 inches thick, so it looks very convincing,” Daugherty smiles with satisfaction.

Interior designer Kathleen Wallace of Boone, N.C., combined the rustic sensibility of a cabin with that of a light-and-airy Swedish home when she worked with cabin owners Larry and Dana to develop the décor for the Kibbin’s interior. “I knew that he thought of it as a very rustic, simple place, while she wanted to pay tribute to her Swedish heritage,” Wallace says. “I tried my best to marry those two visions.”
She let the wood ceiling and walls and the great stone fireplace speak of the cabin identity; to celebrate traditional Swedish design, she commissioned a custom wood dining trestle table with sawn, curvaceous legs and a coat of white paint. Natural fiber textiles with geometric patterns also refer to Sweden. “For the pillows and for a quilt we hung from the loft, I chose red because the cabin owners and their family gather here for the holidays,” Wallace explains. “It is also a very traditional Swedish color.” Dana is especially fond of a series of framed Swedish botanicals that line the great room wall. “They depict plants that grow both in Sweden and here in North Carolina,” she smiles.