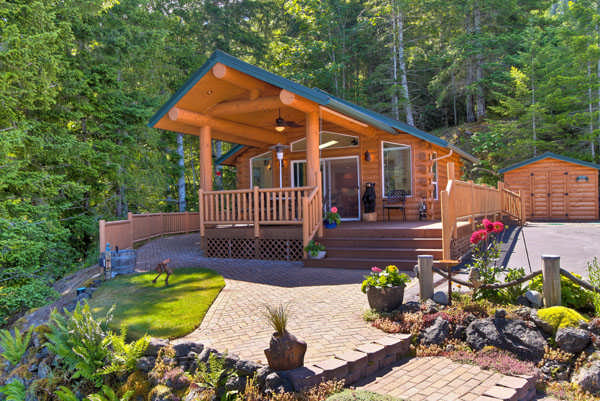 Shop around for quality tools. “On the paver projects, one needs a good saw. I bought a concrete/tile saw on eBay that was about one-third the cost of anything I could buy locally and got a good-quality product.” Enlist the help of friends. To build his dock and install the boat lift, Dale’s friends showed up to help, “which is exactly what was needed,” he says. “It was a lot of up and down the hill packing lumber.” Enjoy yourself! “The main thing when doing projects is to have fun with them, and if you don’t know how to do something, ask the people that do. It’s very rewarding to be able to say ‘I did that.'” Dale Bruntz approached his cabin remodeling project the way most people do. “I did projects over time as I could afford to do them,” he says. Fourteen years later, he and his wife, Jo, have added a few hundred feet of elbow room and replaced every surface; they’ve also completely revamped the landscape. What possessed Dale to buy a cabin that needed so much work? The answer, of course, is location – on beautiful Lake Sutherland, located just outside of Olympic National Park in Washington state and less than 30 minutes from the couple’s primary home. “The lake has mountains on both sides and is heavily wooded,” says Dale. “It’s definitely a beautiful spot.” But perhaps more compelling than the scenery is the good company. “I’ve been involved with Lake Sutherland for over 40 years. I have many friends on this lake, and this little place was right next to my best buddy’s cabin.” 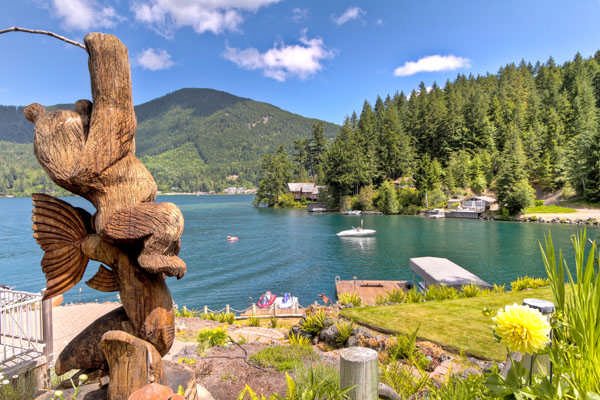 WHAT A VIEW! – Lake Sutherland and the Olympic Mountains in Washington state enticed the Bruntzes to renovate the original “less than one bedroom” cabin. Terry Iverson
When he first purchased the place, it was pretty small. “You couldn’t even have called it a one bedroom,” says Dale. The structure was well under 1,000 square feet, featuring a main living area combined with a kitchen and small bath. Sleeping quarters amounted to an attic that could fit a mattress and was accessible via an unceremonious climb up a ladder. Clearly, the place needed work. Reconfiguring the bed & bath One of the first projects Dale undertook was renovating the original bathroom, which had been constructed from what he calls “materials scavenged from the local mill and a secondhand shower.” Space was reconfigured for a bigger bathroom footprint, which allowed for a larger vanity, a new fiberglass shower surround and the addition of laundry facilities. “Before that, the washer and dryer were in the shed by the lawn tools and mower,” says Dale. Once the charm of the lofted sleeping quarters faded, Dale built a “real bedroom” by adding some square footage to the back of the cabin. “I vaulted the ceiling to make it feel bigger and allow for a ceiling fan,” says Dale. “It’s just big enough for a queen-sized bed and some furniture, but what a difference!” 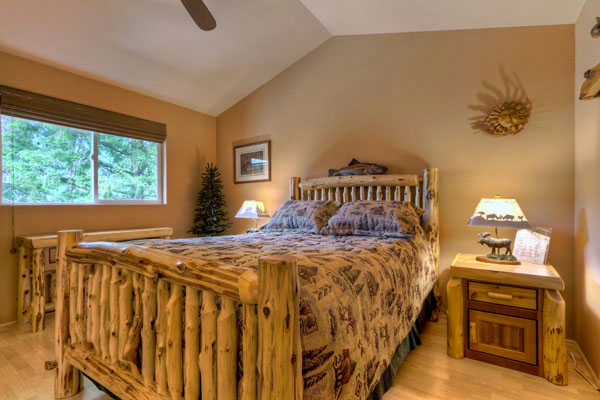 SWEET DREAMS – Adding on to create a bedroom relieved the Bruntzes of their nightly crawl up a ladder to the original sleeping loft. Caption by Terry Iverson
Tying the space together One of the biggest changes came courtesy of a fresh plan for the windows in the living area. The goal was to open up a sight line across the cabin, creating the feeling of spaciousness. Dale hired a pro to sketch this project and ended up with two skylights, oversized sliding doors flanked by large side windows, and a transom window above center. “It added a tremendous amount of light to the cabin,” says Dale. As he renovated room by room, Dale tied all the projects together. “We ‘Sheetrocked’ the whole place and laid a durable laminate of tongue-and-groove flooring throughout,” says Dale. With the walls and floors a consistent style, the piecemeal vibe was gone. Exterior upgrades Nothing adds presence to a place like a substantial porch – or, in this case, a covered deck. “In this part of the country, we’re not really bothered by mosquitoes, so open air works for us,” says Dale. [Editor’s Note: We have no idea what Dale is talking about.]This project involved fastening full-sized local fir trees in a pyramid shape to give the deck roof its vaulted effect. “The covered deck, more than anything, changed the way we spend time at the cabin. We get a lot of rain here but can still be outside,” says Dale, who enjoys puzzles with his neighbors, Greg and Marilyn, late into the season under the deck’s heat lamp. To finish the exterior changes, Dale searched for the right siding to replace the original blue plywood siding. He found Modulog – a type of log siding with patented crisscrossing log corners that he was able to install over the existing siding. “I found it online and thought, ‘Wow that is really neat,’ ” says Dale. The siding is cut in such a way that it looks like a whole log on the ends and gives the place a real log cabin look with a lot less maintenance. “It totally changed the whole feeling of the cabin, then we put steel on the roof and, wow, it was like a whole new place.” Cabin living Now that the years of big projects have been put to bed, Dale and Jo are content to come to the cabin on weekends and putter around their impressive gardens, which feature retaining walls, paver paths, and rockery. “There are always little projects that need to get done,” says Dale. They also enjoy watching boaters on the lake. Dale says, “We joke that our place is part of the tour.” It might have something to do with the 16-foot-tall wooden bear they have by the water – a purchase Dale just couldn’t pass up. He’d admired the mammoth carving, which stood in front of a local business, for years. One day there was a sign with a phone number on the statue, and Dale felt compelled to call. “Honestly, it gets silly amounts of attention,” he laughs. “You can actually hear little kids on boats saying, ‘Oh! Look at the bear!’" Enjoying a small place The joy of a small cabin lies in its simplicity. “Having a small place is great for us because we only use the cabin for weekends, mostly during the summer months,” says Dale. The Bruntzes come out on Fridays and “it’s always a get-together with friends … a grill-out and potluck at someone’s cabin,” says Dale. “[We] know a lot of people around the lake and never eat dinner alone.” To keep cabin living simple, the Bruntzes pack food as needed for the weekends and have only what they need at their lake place. Overnight visitors are accommodated with two futons in the living area. “This works out just fine; we have had no complaints from visitors to the lake,” says Dale. “We spend a lot of time outside and visiting with neighbors, taking boat rides, and visiting other friends around the lake, so we just don’t need a bigger place.” Dale contends that a larger cabin would mean a lot more cleaning and upkeep – definitely not how they want to spend their getaway time. 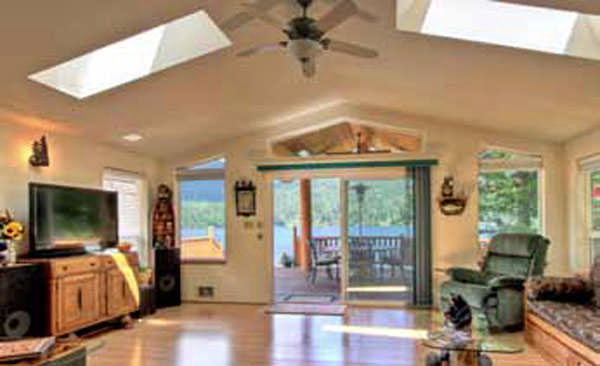 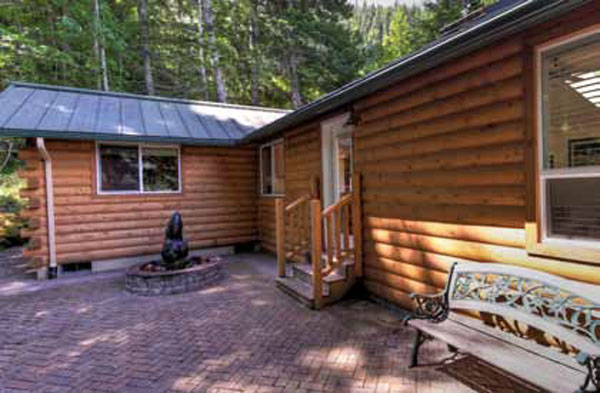 AFTER - Upgraded pavers and a fish-themed fountain create a quiet nook at the side of the cabin. Courtesy by Terry Iverson 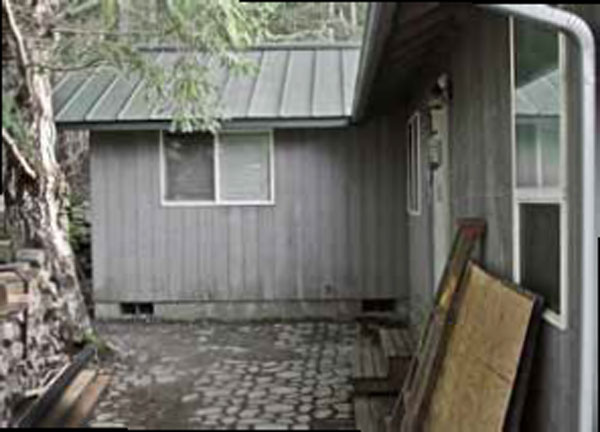 BEFORE Courtesy Dale Bruntz
Lucie Amundsen writes about home improvement but admits to being a rookie when it comes to rockery.
★