A family getaway in northern Michigan gets the blending of cabin and cottage right. The night that third-generation builder Rob Mossburg and his friend, architect Rob Sears, first talked with Mossburg’s parents about building a log cabin, their ideas overflowed onto cocktail napkins, which turned into mini sketch pads. The Mossburg family owned wooded acreage along Lake Michigan’s shoreline north of Harbor Springs, Mich. “You hear the myth about great things starting from a drawing on a napkin,” says Sears, principal of Sears Architects in Grand Rapids, Mich. “This one really did.” The napkin sketches turned into blueprints, and the cabin took shape, incorporating not just design elements that would fit in with some of the 100-year-old-plus cabins in the area, but elements for a welcoming place to gather for the close-knit but far afield Mossburg generations. Close connections The cabin became known as “Josie’s Cabin,” even though it was built for both Mossburg parents, because Rob’s mother’s name, Josie, was more lyrical than his father’s, Bob Jr. The design and construction took on special meaning for Sears because he and his wife, Julie, had grown close to the Mossburg family over the years. The project was particularly heartwarming for Mossburg, who’s been sketching houses that he and his dad could build together since he was 4 years old. “Every house I lived in growing up, my dad built for us,” says Rob Mossburg, who owns The Cottage Company with his wife, Vee. With this project he thought, “Now I get to return the favor.” The two Robs worked closely on the design and construction of the cabin. Over their 15-year friendship, they’ve worked together as a team to design and build about 75 homes of all sizes. They succeed by keeping the lines of communication open, and they make sure communication flows both ways.
Layout & location The cabin lives much larger than its 1,700 square feet. Its three bedrooms and three full baths are evenly distributed over all three levels. The double-height ceiling of the great room allows the top-floor master suite to be an enclosed loft. A sleeper sofa in the bedroom on the main floor enables the room to function as a quiet place to read a book when it’s not needed for guests. The lower level, cut into a hillside under the entire footprint, serves as a private guest suite and provides space for extra storage. Bob and Josie love the outdoors, and they, along with their grown children, have a deep respect for it. They insisted on a small footprint and selected a site on their land that would not disturb some of the oldest trees. After construction was finished, the Mossburgs selectively plucked some trees to open up the views from various rooms. The driveway from the public road stretches about 300 yards and takes a couple of extra turns to minimize the impact on patches of snow trillium, a white ground cover that’s a protected plant species in Michigan. The cabin’s location is really paramount. The woodlands spread out atop a steep bluff that drops down to a white-sand beach along Lake Michigan. The Mossburgs protected much of the acreage around the cabin with a conservation easement. They can hunt and fish a short hike from their front door, and they have privacy, views and a short drive to town. 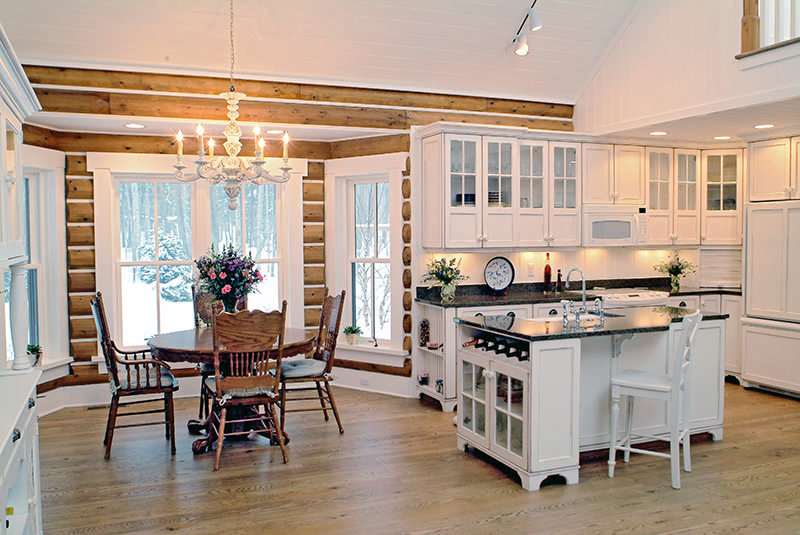 Design & aesthetic Though the cabin was built in the early 2000s, Bob and Josie wanted it to look like it had been there since the turn of the previous century. For the design, Sears suggested a vernacular architectural style of a traditional log cabin for the main section of the house, and for the rest – architectural features popular later in the first half of the 20th century. This gives the impression that the cabin has been added on to over time. “We didn’t design it to be matchy-matchy,” Sears says.
The cabin is sensible in size, but it includes high-level design features normally found in much larger homes. Because the Mossburgs wanted to enjoy the cabin year-round, Rob Mossburg opted to use half-log siding inside and out in the main section of the cabin, rather than full logs. The half-log siding, interspersed with 2x2 boards as chinking, allowed him to use conventional wood-frame building techniques that resulted in a very energy-efficient cabin. “If I had gone through the LEED certification process, it probably would have qualified at the Silver level,” Rob says, which is a step up from the certified level.
Family and friends who visit always gravitate to the screen porch along one side of the cabin. It has a fireplace made of large stones. The heat from the fireplace extends the porch’s use by at least a month before and after the warm season. The other side of the fireplace warms the great room. The stone chimney vents them both.  To overcome a log cabin’s tendency to be dark and masculine, Sears and the Mossburg family incorporated cottage features into the cabin. They used a mix of wood – beadboard on the ceilings and random-width oak planking on the floors – that lends an edgy, contemporary overlay, and they didn’t skimp on double-pane thermal windows; they’re in every room. Because everyone wants to live in the kitchen, Mossburg says, the family chose an open floor plan conducive to entertaining. As a finishing touch, Mossburg used wood from trees removed from the property during construction to make the mantle and some flooring.
Over the years, the Mossburg generations have collected many memories of their time together in Josie’s Cabin. And for Rob Mossburg, he’s happy to have worked together with his father on the cabin’s construction. “My dad’s sweat is in those logs,” he says. What began on cocktail napkins has spilled over into moments recorded in their hearts. 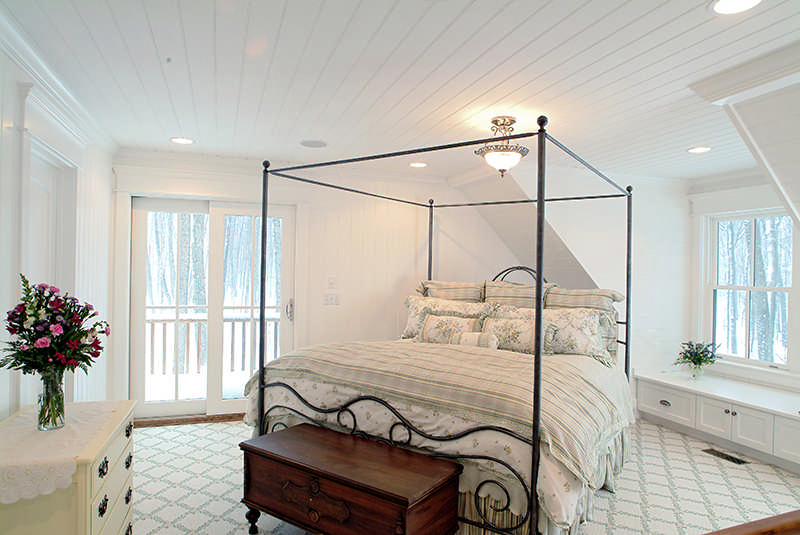 Interior Design Before Vee Mossburg of Cottage Company Interiors could absorb herself in concepts for the interior design of Josie’s Cabin, she had to make peace with the animals – a black bear reared up on its hind legs, a cougar ready to pounce, two mountain goats, antelope, deer of all sorts, a raccoon, a porcupine and a skunk. Her husband, Rob, and his father hunt together, and the cabin was to be the repository of a lifetime of their stuffed and mounted trophies. Yet, amidst this treasure of taxidermy, Vee’s mother-in-law, Josie Mossburg, needed to feel at home.
Sense of place “How do you inject her personality and her likes into such a masculine setting?” Vee says. She did it with flowers. Not the big, bright, showy kind you’d see in the tropics, but wildflowers, subtle, gentle-colored, small-print flowers that reflect the meadows and woodlands on the other side of the window. “Homes should have a sense of place,” she says. “In the woods, you’d see wildflowers.” In the spring, delicate snow trillium takes over the forest floor. It wouldn’t do then to use fabrics with big, red roses and orange hibiscuses. So, Vee kept the color palette fairly neutral, with greens and light browns. Vee did turn the lower level, where the guest suite is, into a lodge-y feel. She indulged the masculinity with red-and-black plaids and a darker color palette including navy and forest green. She added larger-scale rustic furniture – log end tables, beds and nightstands. She accessorized with bronze sculptures and an antique rifle … to complement the big black bear. The main level and master suite have a more feminine touch, albeit with animals crouching everywhere. “It was a real trick,” Vee says. She pulled it off by keeping the mood light. Vertical beadboard ceilings counter the strong horizontal log walls and chinking. She installed distressed white painted cabinets in the open kitchen, and chose a white-painted carved-wood chandelier over the dining table. That created a setting for some delicate floral details.
True to old & new The cabin is about the same size as the homes Josie and Bob Mossburg have lived in throughout their married lives, so they didn’t have to downsize. However, Josie had many sentimental pieces she wanted to include in the décor, such as her grandmother’s sofa, and a dining room table and several small pieces loaded with memories. Vee overcame the challenge of making older pieces look like they belong in a brand-new home, in part through the judicious use of reupholstering. “I’m most proud that we found a timeless way to blend two completely different looks in a way that is true to both,” Vee says. “It’s a contradiction that works.” 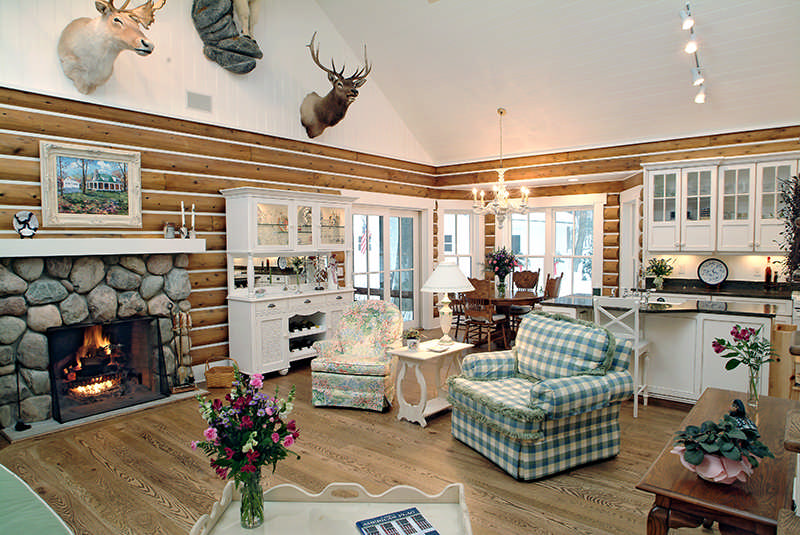 Conservation Easement With a conservation easement, a cabin in the woods will remain a cabin in the woods for the rest of its life. The Mossburg family owns more than 100 acres bordered on one side by Lake Michigan and on the other by what’s known as the Tunnel of Trees, a heavily biked scenic byway that is Michigan’s version of California’s 17-Mile Drive. After building Josie’s Cabin and a couple of others on the acreage, the Mossburgs donated 15 acres to the Little Traverse Conservancy to preserve the unspoiled land so that it would never be developed, and the road along that section would not be straightened and widened. “We’re big fans of the conservation easement process,” says Rob Mossburg, who has served on the board of the local conservancy. Little Traverse Conservancy walked the Mossburgs through the process without the family needing to hire a lawyer, surveyor or other real estate professional. Some donors put restrictions on their donations, but the Mossburgs donated their land without any restrictions. A conservation easement affords tax benefits, and a donation the size of the Mossburgs’ has inspired neighbors to do the same. “Our donation has contributed to a lot of green space forever,” Rob says. “And that’s wonderful.” Freelance writer Nancy Oates would love to have a cabin to use year-round.
RESOURCES
• Sears Architects, www.searsarchitects.com
• The Cottage Company, www.cottage-company.com
• Cottage Company Interiors, www.cottage-company.com
• Little Traverse Conservancy, www.landtrust.org
★