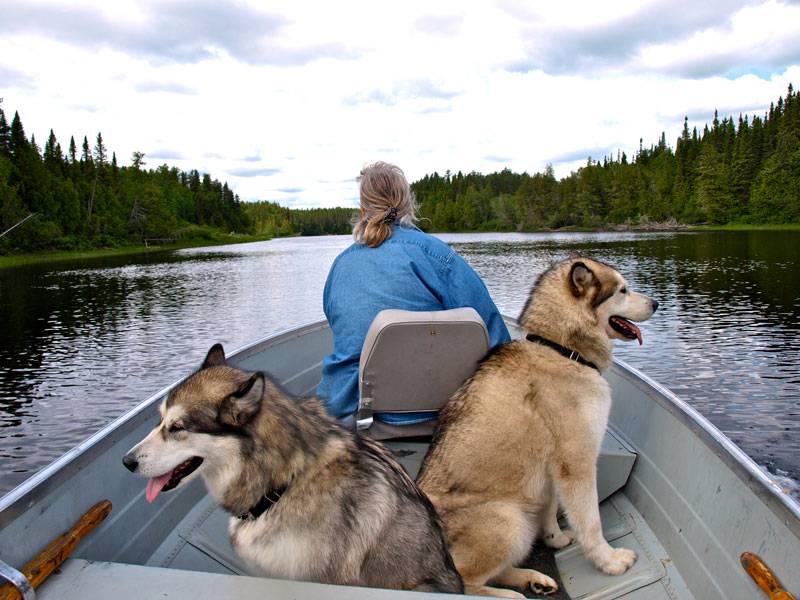 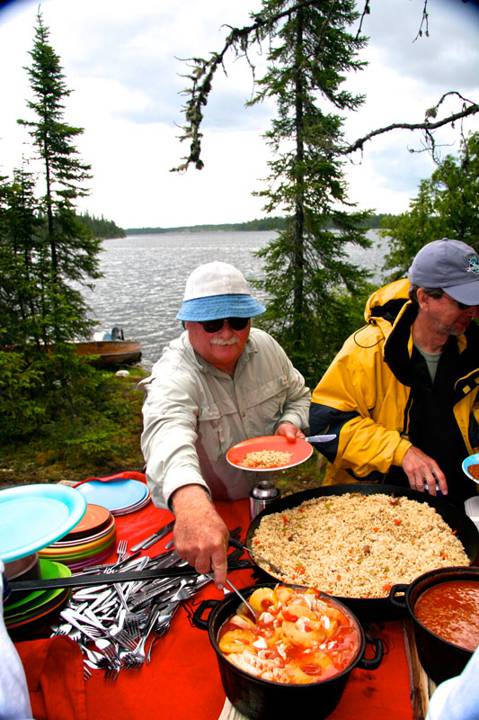 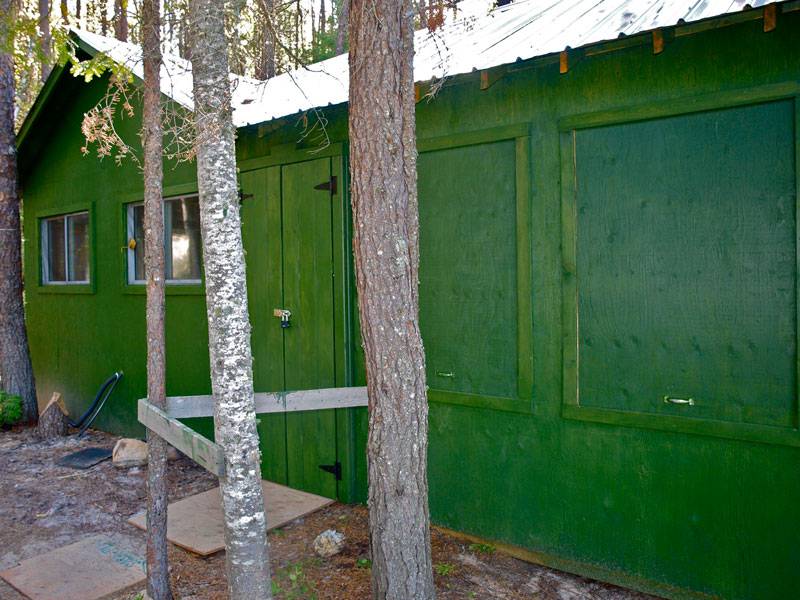 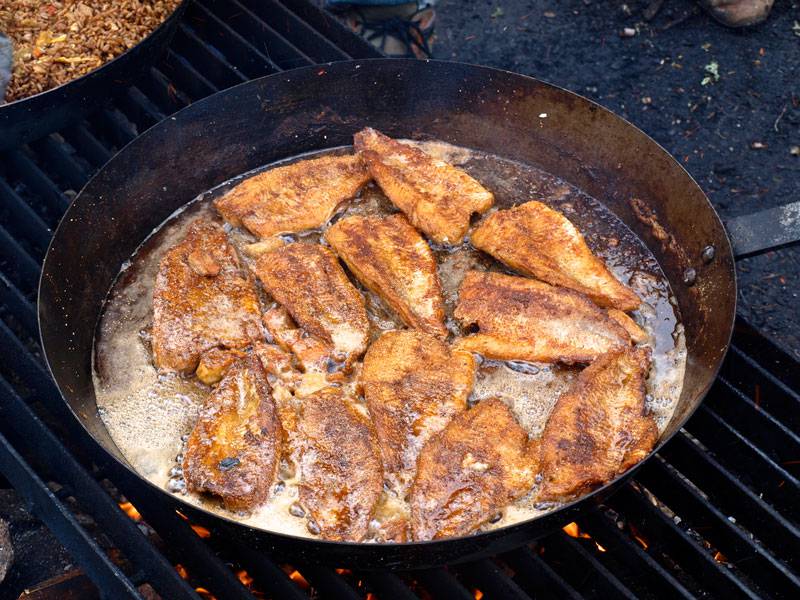 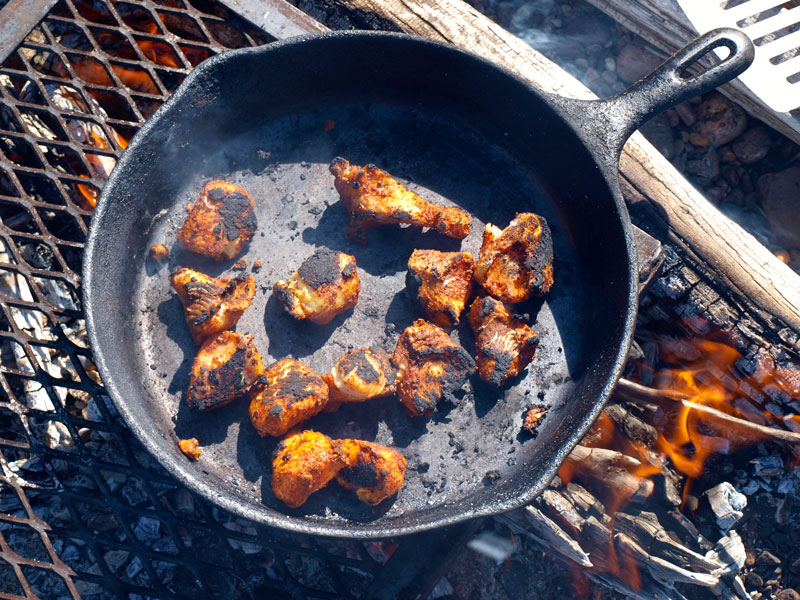 As the crow flies, Harold Ball’s cabin is located about 137 miles northeast of Thunder Bay, Ontario, in the township of Greenstone. His property is the only piece of deeded land within 350,000 acres of what Canadians refer to as “Crown land,” which is public land. The nearest neighbor is about 50–60 miles away. The cabin is accessible by water and floatplane only, which really makes for a nice getaway with his wife, Lauren, from their primary home in Whitby, Ontario. Though it is a 14-hour drive, plus the extra boat or plane trip, Harold is retired so he tries to visit four or five times a year. Lauren will go up maybe three times with him, and he’ll bring their two Alaskan malamutes, Delinè and Tikhaia. Harold and Lauren have owned their piece of lake paradise for about six years. The off-the-grid cabin was built in the late 1950s, so they renovated the existing structure. The original cabin is about 14x28 feet, and they added a 12x12-foot section and then built a 12x18-foot section onto that. Now, there is also a flush toilet with a septic system. 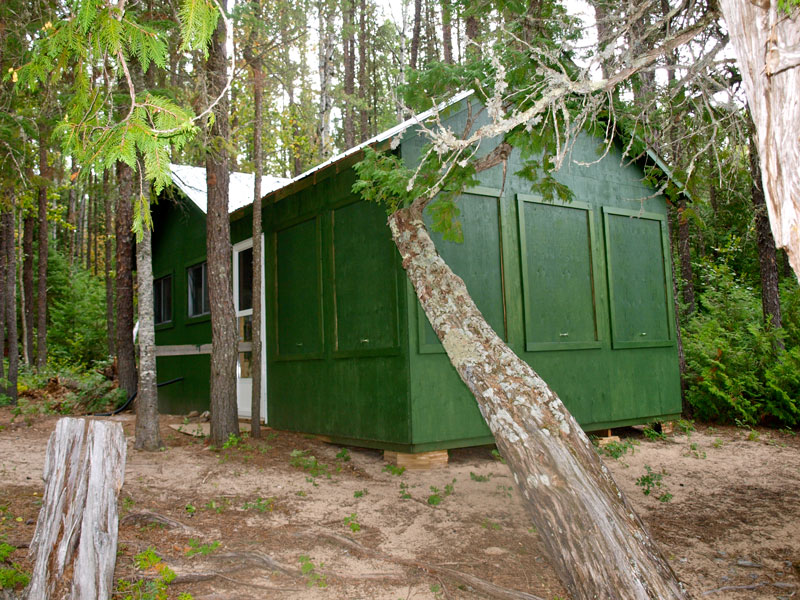 The couple’s friends did all the building for them. “We joke and we call them the ‘We Work For Food Construction Company,’?” comments Harold. And food they have at this tiny retreat. What’s on the menu?

Cooking up a feast

“We love to fish, and there’s fabulous fishing in the area. That’s pretty much a daily activity,” says Harold, so cooking up a delicious shore lunch of walleye, trout or pike is common for the Balls and their friends. The nice thing about shore lunches is they are moveable. You can just pull your boat ashore, or plan a picnic by your cabin. “From time to time, we’ll just pack up a shore lunch kit: frying pan, grate, that sort of thing, and eat ’em where we catch ’em,” says Harold. “That’s the way we’ll spend a late morning or an early afternoon. Usually, we eat walleye. There’s good pike fishing there too, but they can be a pain in the neck to clean. But walleye, they’re pretty abundant, they’re easy to clean, and they sure do taste good,” he says. 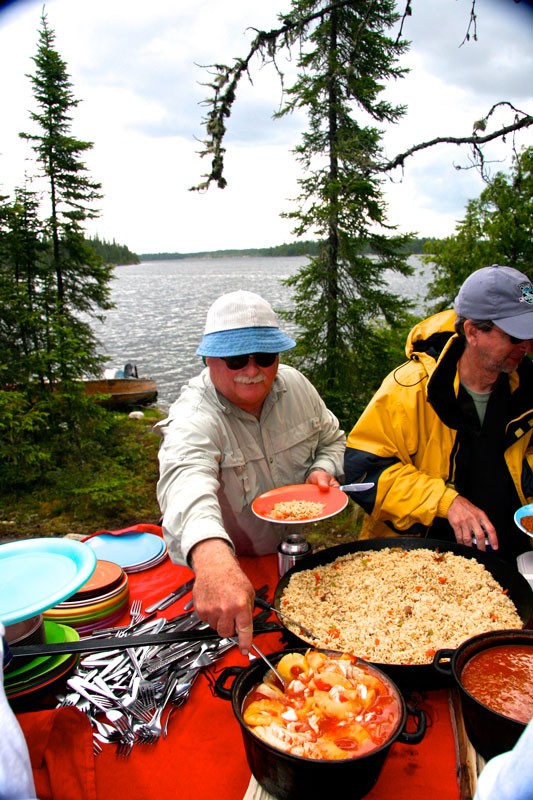 If you are planning a shore lunch on the go, Harold suggests taking two, 12-inch cast-iron pans, a grilling grate, plates, knives, forks and oil or butter. Set the grate on rocks. Keep ingredients basic like seasoned flour, salt and pepper. Dredge your fish in this mixture and then fry them up crisp. Bring along a cooler with cold beverages and/or a coffee pot. Shore lunches at the cabin can be more elaborate. “I’ve had shore lunches with large groups where we’ve had seven or eight courses. Everybody will contribute a course,” Harold says. Through trial and error, and over time he’s developed his own methods and a downloadable cookbook, “The Cabin 14 Ultimate Shore Lunch Cookbook.” (See www.cabin14.ca.)

As far as tradition goes, there are three dishes that are absolute musts at any of Harold’s shore lunches. “There invariably has to be fried potatoes and onions. There has to be beans. And there also just has to be the traditional walleye, with a bit of seasoned flour,” he comments. Garlic bread is also often served. If someone’s really ambitious, they grill some pike. Harold says that pike is a nice fish to grill in a grilling basket, adding seasoning salt and fresh lemon. Walleye doesn’t hold up that well in a grilling basket. Baked fish in well-sealed foil packets is popular too. “If you are going to be doing baked fish, you have to be sure to let a section of your fire burn down so you just have coals. You have to keep an eye on it. Usually, you turn it once during cooking,” Harold advises. “The trick is: Once the foil puffs up, it’s usually done.”

Harold loves to catch fish, and there’s nothing better than serving up fresh caught fish right out of the lake. There’s also the camaraderie, the preparation of the meal and the getting it right. “One of the best times is when it’s all over and done, and you’re just sitting there in the sun on a rock, or wherever you happen to be, and enjoying people’s company and a hot cup of coffee. Everything’s good. Everything’s right with the world,” he says. “It’s really making it an integral part of your entire outdoors experience, that’s reallywhat this is about.” It’s hard to go back home, “kicking and screaming usually,” Harold jokes. 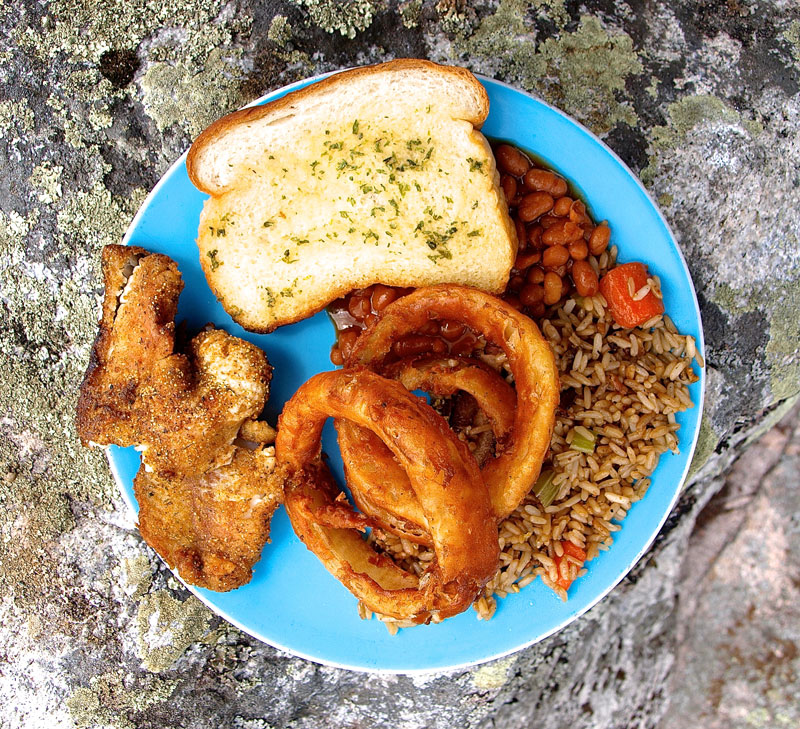 The key to preparing a shore lunch is being well organized and doing things in a logical, orderly sequence. To that end, here are some guide-tested tips from Harold Ball that will help you. Mix up your fish coating, parboil potatoes and chop up any vegetables you will be cooking beforehand. Ensure that the cooking grill fits over the pit, and is both level and stable before you build your fire. Small stones are good for stabilizing/leveling both your grate and frying pans. Remove the grate, and build your fire. Once the fire is going, put the grate back on. While the fire is burning down, fillet the fish. Depending on their size, you may want to cut them in half so they will fit into the pan. Set aside until you are ready to cook. Remember to rinse the fillets off after skinning them. One of the most common mistakes made when cooking a shore lunch is overheating the cooking oil. If the oil is too hot, your food will likely burn, and not be cooked through. Therefore, always keep a close eye on your pans, and test before you fry. If your oil is smoking, remove the pan from the fire, discard the oil, and start over. After the fire has burned down, place pan on the grill, and add enough oil so that you have about 1 inch in the pan, then let it heat up. Test the temperature of the oil either by placing the corner of a fillet, or sprinkling a few drops of water into the pan, and if the fish sizzles, or the oil pops – it’s ready. Shake off any excess flour, and add fish to the pan. Don’t overcrowd the pan; otherwise the fish will not cook evenly. Transfer the cooked fish (they should be golden brown and crispy) to a metal plate that you have lined with paper towels, and place on the outer edge of your fire to keep them warm. Don’t cover; otherwise the fillets will get soggy. Thoroughly clean up the site once lunch is finished and double check to ensure that your fire is completely out. Julie Kuczynski remembers one shore lunch when a faulty tripod grate dumped all the fish in the fire!
★