Building an Energy-Efficient Cabin on a Slope

This cabin, located on a steep lakeside lot, required some creativity and patience. The results? A dreamy, energy-efficient treetop getaway, right on the lake.

This multilevel treehouse-inspired cabin perches on a steep slope overlooking a secluded pond in the Berkshires. Mahogany siding and green upper siding panels look like wood but are actually Allura pre-finished fiber cement. Corner boards, window trim and fascia are an innovative manufactured product from Boral.

This is the original cabin. The family still uses the stairs down to the water.

Gray schist for the kitchen countertops and island was quarried in Goshen, Mass. Susan loves to cook and opted for a BlueStar range. A sleek Cavaliere island-mounted range hood provides ventilation.

"By the time you get to the main living floor or master bedroom, you’re literally in the treetops,” says architect John Cole. A 16-inch diameter hemlock column in the center of the living area supports exposed fir beams. Locally milled floors and natural woodwork are Douglas fir.

The third floor master bedroom has a balcony overlooking the lake. 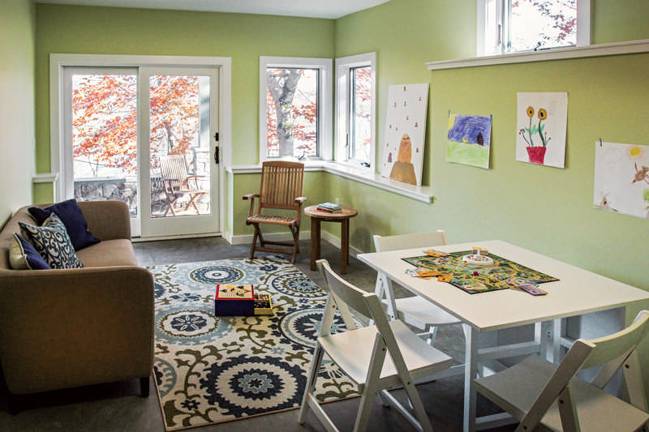 Children’s artwork decorates the family room in the walk-out basement. The ground-floor level also features the children’s bunkroom, a bathroom and a mechanical room.

The walk-out basement leads to a stone terrace on the cabin’s lake side with an outdoor shower. 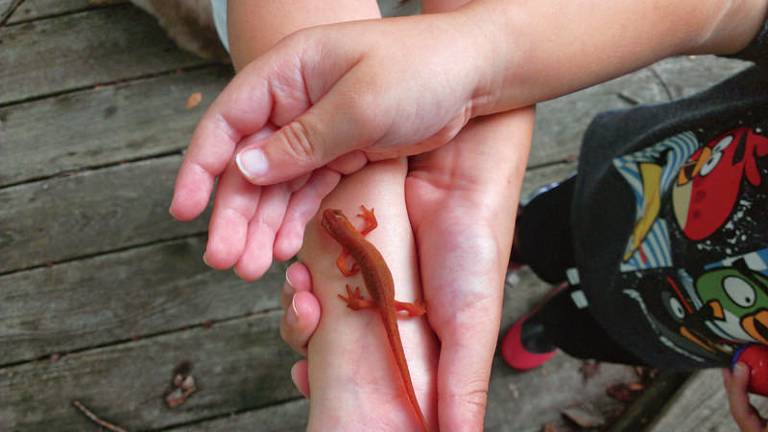 Both parents and their offspring love to explore the natural world. Fishing and canoeing are popular pastimes. A successful newt hunt!

This multilevel treehouse-inspired cabin perches on a steep slope overlooking a secluded pond in the Berkshires. Mahogany siding and green upper siding panels look like wood but are actually Allura pre-finished fiber cement. Corner boards, window trim and fascia are an innovative manufactured product from Boral.

Susan Chien and Edgar Leighton couldn’t be happier with their hillside hideaway in the Berkshires. For years, these Rhode Islanders vacationed at a rental cottage on Eagle Island in Penobscot Bay, Maine. Susan grew up in Caribou in northern Maine; like the rest of the neighbors, her parents owned a lakeside camp. Edgar, a New Hampshire native, cherishes memories of boyhood summers on lakes in the Mount Monadnock region. In 2013, the couple began looking for a retreat to call their own. Both have backgrounds in biology (they met at Brown University in Providence, R.I.) and wanted a cabin attuned to nature. It had to be on the water and close to home, so the couple could drive up after work on a Friday with their two young children.

An Internet search turned up a vintage cabin overlooking Center Pond, two hours away in western Massachusetts. To check it out, the couple took the Jacob’s Ladder Trail. The state scenic byway winds through bucolic countryside and quaint small towns along the Westfield River. “If the whole trip is like this,” Edgar recalls thinking at the time, “it will be a special place.”

“Special” it was. The property had been on the market for three years, and the price was considerably reduced. “We could see why,” comments Susan. “It looked like somebody’s uncle built it.” It appeared that the original part had gone up years ago and was added onto at some point. The long narrow structure rested on piers, with one corner barely on by a couple of inches. Clinging precariously to a steep slope, the cabin was braced by an oak tree that was growing into the trim.

Estimates to reinforce the piers were astronomical. One contractor, though, agreed to the job for a reasonable price. Unfortunately, he passed away just before Susan and Edgar closed on the property in August, 2013.

The lawyer who helped with the closing recommended Paul Horton, a carpenter and general contractor in nearby Pittsfield, Mass. “The whole place was leaning towards the lake,” recalls Horton. “I suggested they tear it down and start over.” Horton told them about architect John Cole, with whom he had worked in the past.

The Boston-area architect specializes in the design of vacation homes in Massachusetts and Maine. “We liked his designs, in particular a 900-square-foot compact cabin,” notes Susan. “We were looking for small.” When Cole visited the site, he agreed with Horton. “I told them literally there was one side they shouldn’t stand on because I was afraid it would collapse,” he says. “Like many of these places, the cabin had a certain amount of charm, but fixing such structural deficiencies to bring it to modern standards would be more money than it was worth.”

The couple heeded the advice. Still, Cole faced a number of constraints designing a replacement, including zoning setbacks (the old cabin was nonconforming), a septic field on the side and a small available footprint. “We ended up with a square 24 by 24 feet,” he says.

The solution? Building up, not out.

Allen Bird of Windsor Land Clearing & Excavating came in to remove the cabin and oak. Horton started construction in October and worked through the dead of winter, completing the cabin by May 2014. Firmly rooted in a new foundation (first, Bird had to blast through a stone ledge), the 1,600-square-foot cabin rises two-and-a-half stories.

“Think of this as a tree house,” Cole suggested to his clients. “By the time you get to the main living floor or master bedroom, you’re in the treetops, literally.” In summer, the couple looks out onto a leafy canopy. “You can’t see into the house from the lake,” notes Edgar. “I think a lot of people didn’t even notice a new structure.”

A tree supports the new cabin, too. This time, though, it’s intentional. Interpreting the couple’s wish to bring the outdoors in, literally, Cole incorporated a peeled hemlock as a column. The 10-foot-tall, 16-inch-diameter trunk bears the weight of a carrying beam down the cabin’s center.

A walkout basement features a bedroom for the children, along with a family room, full bath, mechanical room and storage closet. This lower level opens onto a stone terrace overlooking the lake; an outdoor shower here keeps sand from being tracked inside. The main floor living space is open to the kitchen and dining area and includes a laundry room and pantry. Stairs lead up to a master suite under a hip roof. Both the large deck on the main level and a small one off the master bedroom have heavy-duty hardware cloth instead of balusters. Cole devised the system to make railings as transparent as possible. “One of the issues I come across with these vacation homes,” he notes, “is that to see the water you have to look down at a sharp angle.”

A simple, functional interior was on Susan’s wish list. “I wanted it to feel clean, uncluttered,” she says, “a place I could retreat to and not be overwhelmed by the number of things around me.” Cole encouraged Susan to save pictures she liked on Houzz, a home improvement website. Creating and sharing “ideabooks” (like scrapbooks, online) not only helped Susan pinpoint what she was looking for, it also gave Cole a sense of her taste.

Energy efficiency was also a must. “We didn’t want the house to use a lot of energy when we weren’t here,” says Edgar. Together with Cole, they researched a Massachusetts state program called Green Communities designed to reduce energy consumption. “For achieving levels of efficiency, you can get rebates from the utility companies,” explains Cole.

To qualify, the cabin had to meet rigorous Energy Star guidelines for the building envelope, mechanical systems, windows and insulation. An energy assessment by a certified HERS (home energy rating system) rater measured how well the cabin met its goals. The cabin achieved Tier 3, the highest level of the Mass Save incentive program for new construction. “Our 10-year plan to tear down and rebuild ended up being a two-year plan,” Susan says in retrospect. But not shoring up the piers turned out to be a blessing in disguise. Thanks to Cole and Horton, Susan and Edgar now have the cabin of their dreams. And since it’s virtually maintenance free, there’s even more time for the fresh air fun they love: hiking, canoeing and fishing with the small fry.

A Modular Cabin on the West Coast

The Little Cabin in the Woods

A 388-Square-Foot, Farmhouse-Style Cabin in California