Dreaming of a yurt? One family shares how they built an unplugged Yurt in Adirondacks. 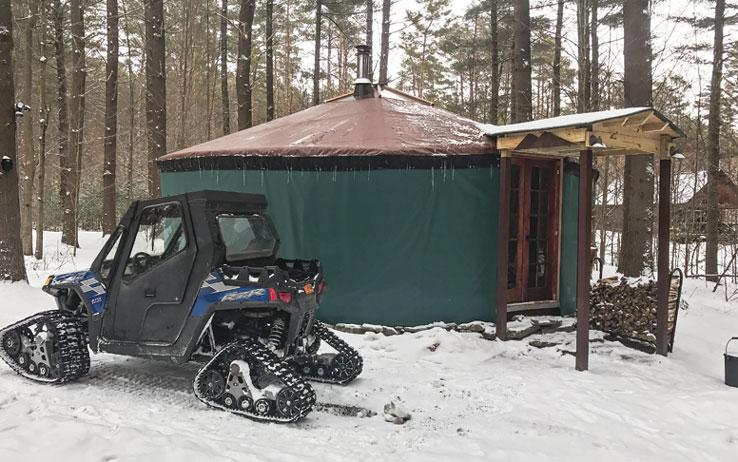 Cabin living readers may recall Mike and Sylvia Mabunays’ retreat in upstate New York that was featured in a recent “Unplugged Cabin” story. Now, the couple are proud owners of an unplugged yurt as well as an off-grid cabin.

The Mabunays wanted additional space to host guests. An online yurt forum (yurt- forum.com) led to Surely Yurts in nearby Taberg, N.Y. The yurt manufacturing company is owned by local craftsman Steve Reed. “We found out that Steve has done work for corporate out ts like Athleta,” says Mike. “Sylvia and I met with Steve and his wife and decided the location.”

Last March, the Mabunays extended utilities and water from the cabin to the predetermined site, about 350 feet away from the cabin. They also installed a separate septic system so the yurt would have a fully functioning bathroom.

Construction of the 24-foot diameter yurt got underway in May. Lattice wall slats are tulip poplar, a clear hardwood that’s virtually knot-free and strong. Roof rafters are rot-resistant larch (aka tamarack) that’s locally sourced. “We finished it last August and used it actively during this past winter,” says Mike. Since the area borders the western Adirondacks, snow fall was a concern. From peak to platform, the yurt meets town snow load requirements of 85 PSI.

The bathroom boasts a slate shower with river rock base, onyx sink and a tankless water heater. A propane direct vent heater keeps the bathroom warm and PEX (cross- linked polyethylene) pipes from freezing when the stove isn’t on.

“We used the yurt during last year’s winter and found it absolutely delightful,” says Mike. Perhaps, the only “problem” may be that their guests won’t want to leave.
★