A family transforms a run-down lake cabin in Wisconsin into a glorious retreat. 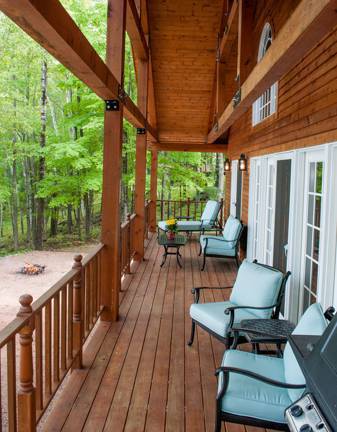 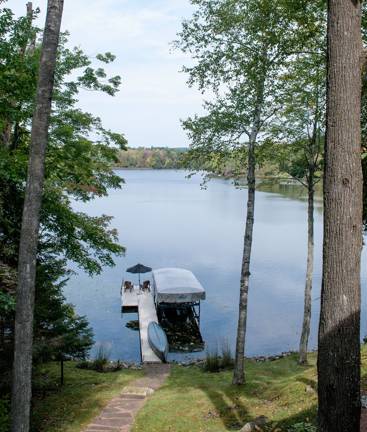 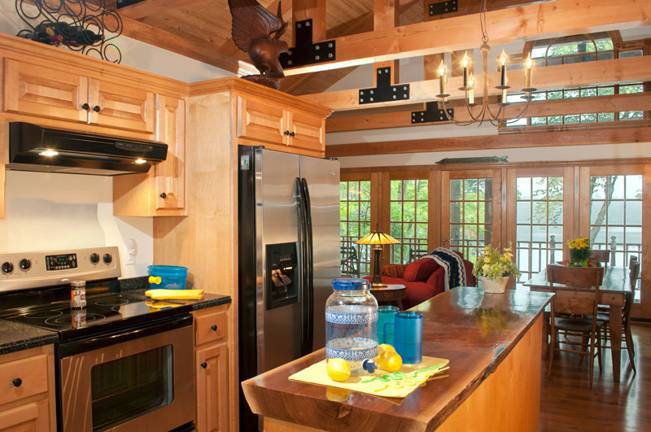 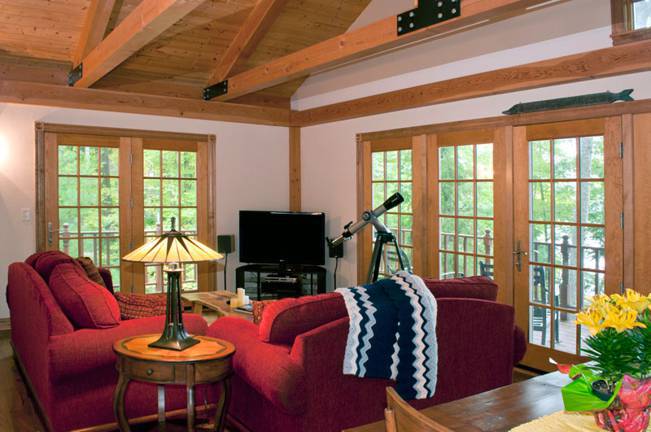 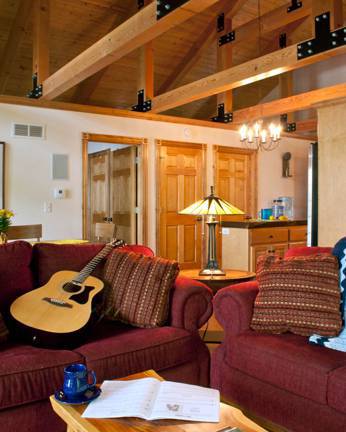 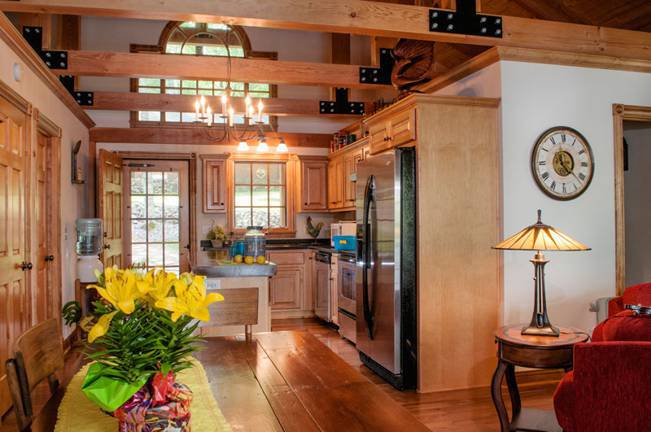 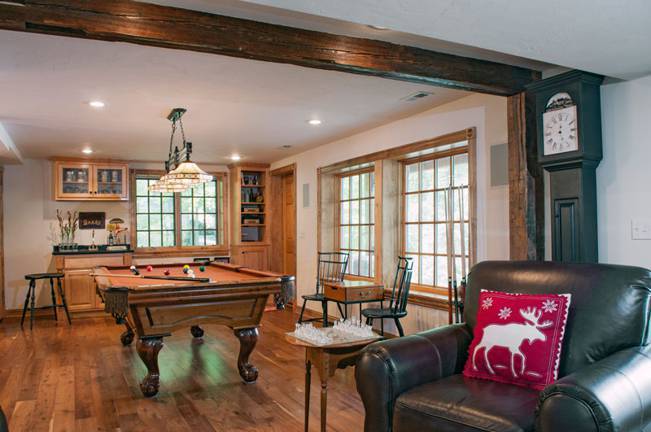 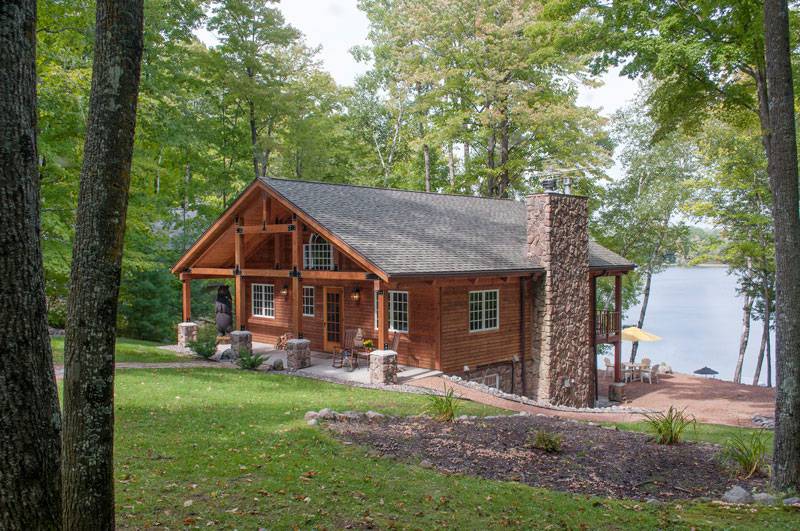 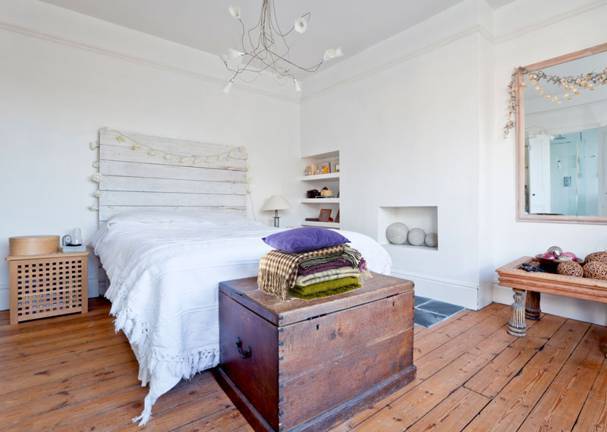 Previous Next
Written by Christy Heitger-Ewing
Sometimes all it takes to fall in love is the perfect driveway. Billy and Jen Brown had toured many lakehomes. None of them seemed like a good fit until their real estate agent showed them a property located about an hour north of Green Bay, Wis. They meandered down a beautiful gravel driveway – one that was splendidly long and lined with maple, poplar and pine trees. It was like nothing they had ever seen before. They could sense this place was special.
When they finally reached the end of the driveway, they laid eyes on a stunning 8-acre property on Shay Lake. Billy, a retired professional motocross racer, is also an avid waterskier, and this small, spring-fed, 70-acre lake promised ideal skiing conditions. In addition, the Nicolet National Forest was near the property, offering endless trails for ATV riding. On top of all that, the cabin was less than a three-hour drive from their main home in Erin, Wis. Before the Browns stepped foot inside the 1950s-built cabin, their real estate agent warned them that it was a diamond in the rough.
“That summed it up,” says Billy. “The inside was shot. It had mice. It wasn’t pretty.” Billy and Jen kept an open mind and accepted a pontoon ride from the elderly couple that was selling the place. While touring the lake, the husband and wife explained how they had hoped to sell to a young couple looking to start a family. When Billy and Jen left the property by way of the gorgeous treelined driveway, Billy said, “We can do this! We’ll remodel it.” Jen countered, “Nope. We’ll rebuild it.” As it turns out, they kind of did both. 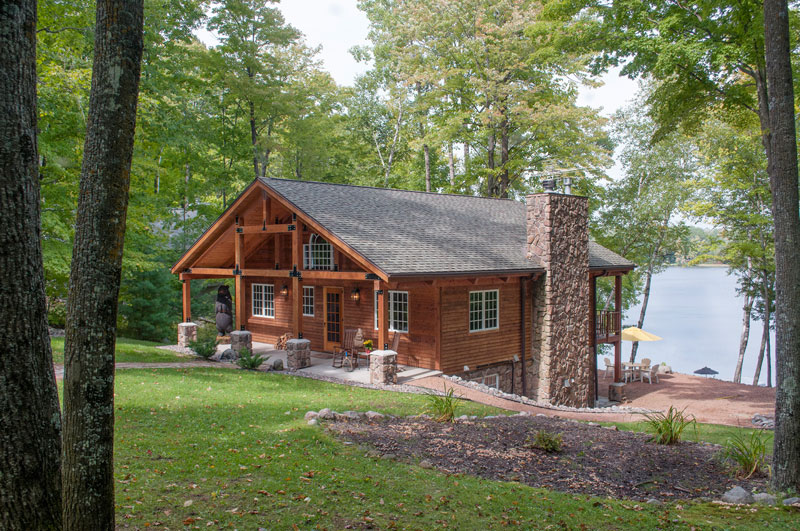 The cabin sat just 75 feet from the lake, creating a fantastic view. With the setback requirements and regulations, if the Browns chose to build brand new, they would have to set the structure back much farther from the shoreline, thereby sacrificing the phenomenal view. They weren’t willing to do that, so instead they chose to revamp the 2,000-square-foot cabin on the existing foundation.

In 2004, the Browns tore down the cabin to the block foundation, and with the help of Scott Miller at Miller Post + Beam in Crivitz, Wis., and local carpenter Don Baake, they erected a rustic, yet elegant timber-frame home. They used Oregon Douglas fir, a high-quality wood that offers a warm tone and a high structural capacity. Miller designed a timber-frame roof system, beefing up the exterior walls to accommodate the extra weight of the exterior trusses. Doing so kept the floor plan open.
“The living room is relatively small, so we didn’t want to include columns because they would become obstacles,” explains Miller. 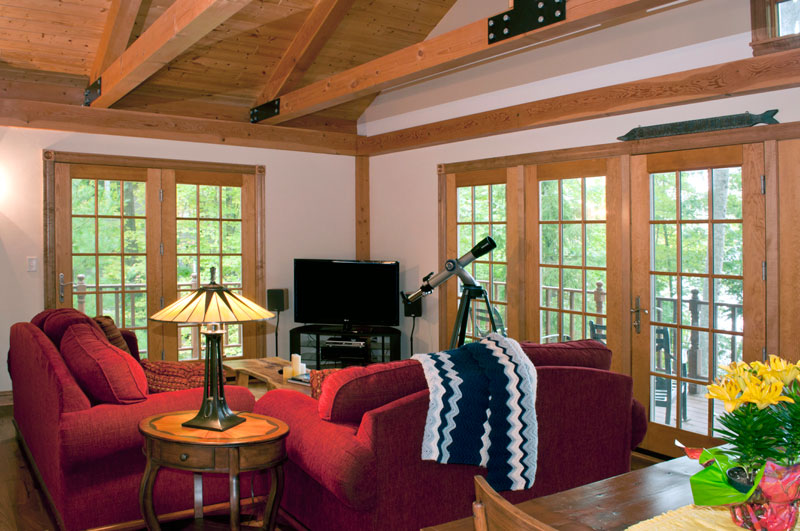 The Expression of Timber Framing

Miller says that today, so many houses are built with standard 2x4 lumber trusses where insulation is blown up into the cavity. “That’s completely opposite of what one would do with timber-frame structures,” he says. The foremost architectural feature of the Browns’ cabin is the visual expression of the natural structural form, using the metal plate connections as a focal point. It is a construction method used in many North Woods and lakehome retreats. “By using Douglas fir timber trusses, we could extend the roof system beyond the main footprint of the cabin and express the timber framing at the entry and lakeside,” explains Miller. The owners chose to use ventilated roof insulation panels (Vent-Top ThermaCal roof panels manufactured by the Cornell Corporation), as opposed to wood decking, in order to insulate the roof and maintain the view of the timber trusses throughout the cabin. Enterprise Engineering Consultants located in Peshtigo, Wis., worked on the design and fabrication of the timber trusses. Tearing off the old roof required that additional framing be attached to the structure in order to strengthen the walls appropriately and support the new timber-frame trussed roof system for the cabin. 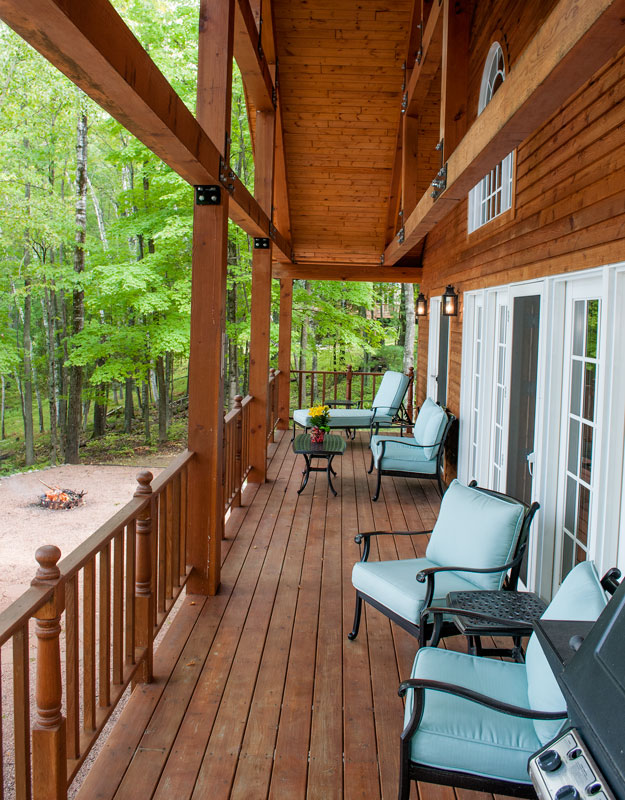 During construction, which lasted from 2004 until the summer of 2006, Billy spent most weekends at the cabin selecting materials, sanding beams, running to the lumberyard, installing windows and making design decisions.
Jen, a schoolteacher, wasn’t able to travel as frequently because their son was a newborn at the time. The couple tried to keep as much of the construction as natural as possible. They chose black steel plates to connect the truss members. They also opted for copper gutters, and the soffits were handmade, as were the screen doors. “We really like the all-wood look to a home,” explains Billy. “We were going for a natural, out-East type of early-American feel.”
The upper level has two bedrooms (the master has a fireplace), one bath, the kitchen and a family room. The downstairs has one bedroom, one bathroom, a recreational room with a pool table and a sitting area with a fireplace. It’s a great spot for entertaining guests. 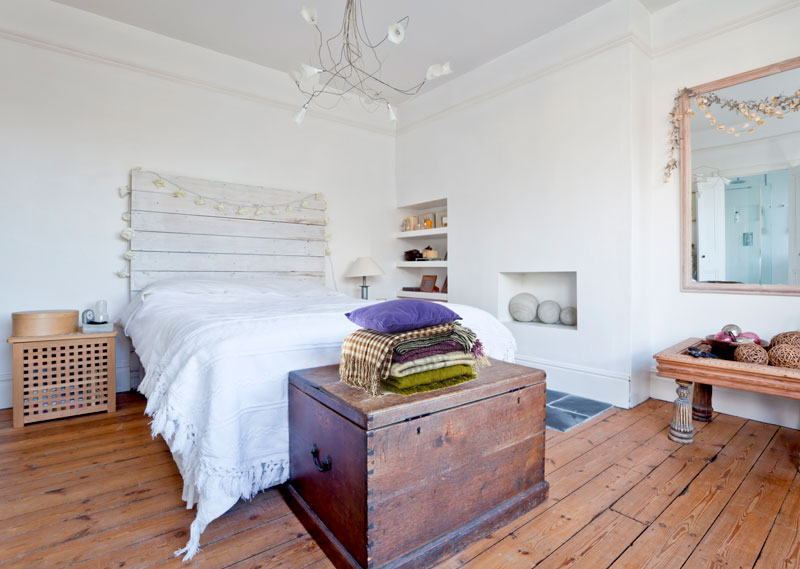 Reclaimed, Yet Clean and Modern

For years, Billy collected barn beams (in the hope of someday using them), so the support beams in the lower level came from his collection. In addition, the mantel on the lower level fireplace is made of Milwaukee “Cream City” brick. These bricks, which came from buildings erected in the 1900s, got their name because of the cream-colored sands of Lake Michigan. The slabs of wood on the basement bar and on the kitchen’s island are black walnut. The cabin also has 4-inch, wide-plank black walnut flooring. The owners chose it due to the rich color and lack of abundant knots. “We didn’t care for that ‘country kitchen, hunker-bunker farm feel,’?” says Jen. “We wanted a modern, clean, luxurious look.”

The Browns and their two children, ages 9 and 7, now visit the cabin at least once a month, and for longer stretches at Christmastime, Easter and during school breaks. “I love going in the winter. It’s so peaceful,” says Billy. “I can start a fire, sit back and enjoy a beer. Plus, I don’t have to worry about grass cutting!” Wintertime fun also includes ice-fishing, sledding and snowmobiling. While Jen enjoys cold-weather activities, she says that she and the kids prefer the summer season when they can waterski, tube and zip around the wooded trails on their 4-seater UTV. The family also likes to canoe, fish, bike, picnic and relax on the deck. To mix it up, they sometimes go into town so the kids can score some sweets from the old-fashioned candy store. And when they’re in the mood for a yummy meal, they head to the Weatherwood Supper Club, their favorite dining spot just 10 minutes up the road in the town of Mountain. 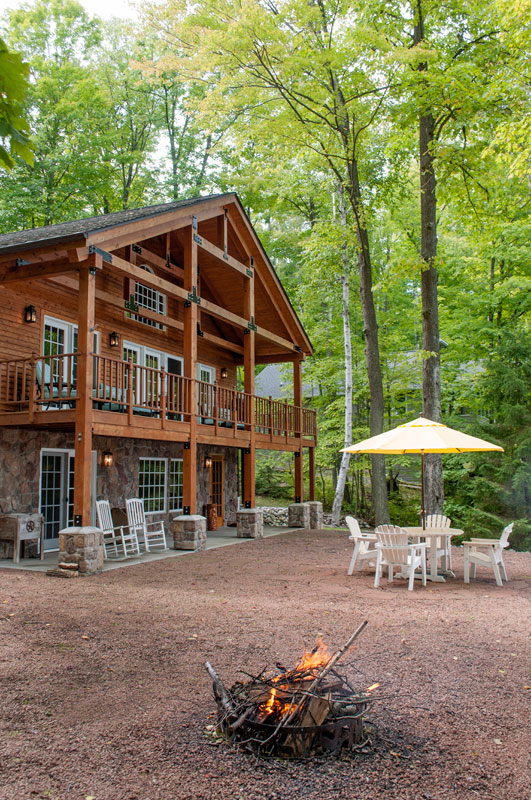 The Browns appreciate the privacy that comes with 26 home sites on the lake. Even during holiday weekends like the Fourth of July and Labor Day, the area never feels overrun. “We joke, ‘Oh, the lake’s really busy today. I see three boats out there!’?” says Jen. Still, although they treasure the tranquility, the family looks forward to connecting with their neighbors.
There’s one family, in particular, whom they enjoy getting together with for drinks or hanging out on the pontoon. The Browns also like connecting with nature. Shay Lake is known for its loon population. In fact, rumor has it that the same loon has lived on the water for years. He lost his mate, but he continues to come back. The Browns also share their lake frontage with an otter family. “In the summer, they float by our dock. And in the winter they use our hill as a snow slide,” says Jen. “It’s hilarious.” Last summer the Browns encountered a young black bear meandering up a path – not an uncommon sighting since the family loves to pack a picnic in the back of their ATV and go exploring in the woods. “We see bear and deer quite often around here,” says Billy. Eventually, though, Billy and Jen always return to that awesome gravel driveway that first drew them in. They were right about it being special. And now it’s theirs.

• Miller Post + Beam, www.miller-post-beam.com
• Enterprise Engineering Consultants, www.eecltd.com
• BeDe Design, www.bededesign.com
Christy Heitger-Ewing knows that if her family cabin was just three hours away, her 4-year-old son, who is addicted to boating, would insist on visiting it weekly.
★