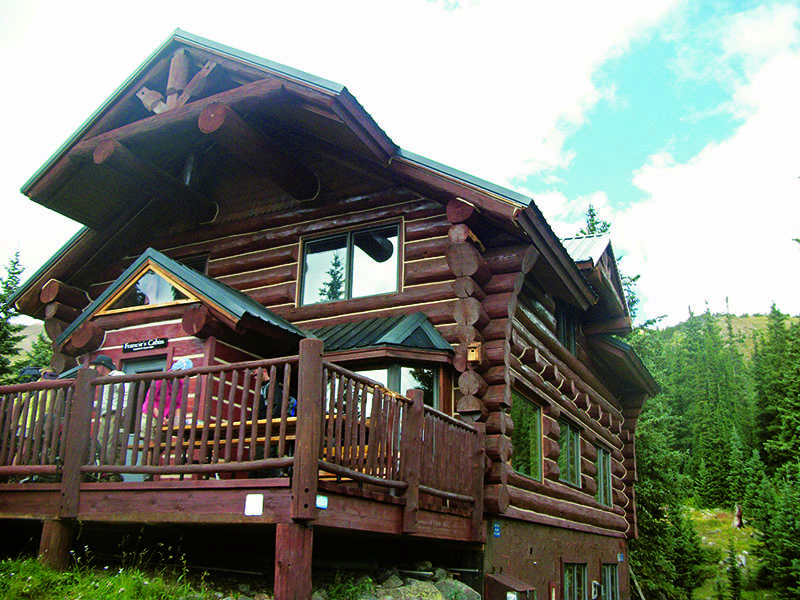 Well, I don’t actually own a cabin. But, I love the mountain cabin lifestyle. Occasionally, my family and I enjoy cabin living by spending a few days at one of the Summit Huts in Breckenridge, Colo. These rustic cabins are not accessible by road. The only way to get to them is to hike, snowshoe or cross-country ski while toting all of your food and supplies. In March 2011, we went to Francie’s Cabin. Our party of six included my wife, Kathy, daughters Nicole (18) and Megan (14), and cousin Susie and her fiancé, Matt. What an adventure it was! Francie’s Cabin sits 11,264 feet above sea level, and there are two ways to get there: a longer, flatter way (4 miles) and a shorter, steeper trail (1 mile). We had once snowshoed to a hut in the 10th Mountain Division Hut Association system, dragging our sled about three miles on a flat trail into the wilderness, so we were confident that a longer trail would be a piece of cake. It was noon on a perfectly sunny, 25°F day when we loaded all of our stuff (75 pounds worth, including 15 pounds of trail mix) onto two sleds for a two-night adventure. We might have over-packed. The day before, the area had received about 2 feet of snow, and no one had broken trail yet, so we set out snowshoeing through fresh powder. The ladies were leading, trying to pack the snow, while Matt and I each dragged a sled. Two hours later, we realized that we’d only gone a mile. Everyone was getting worried that it would take too long in this deep powder to go another three miles. Reluctantly, we played it safe and turned around. 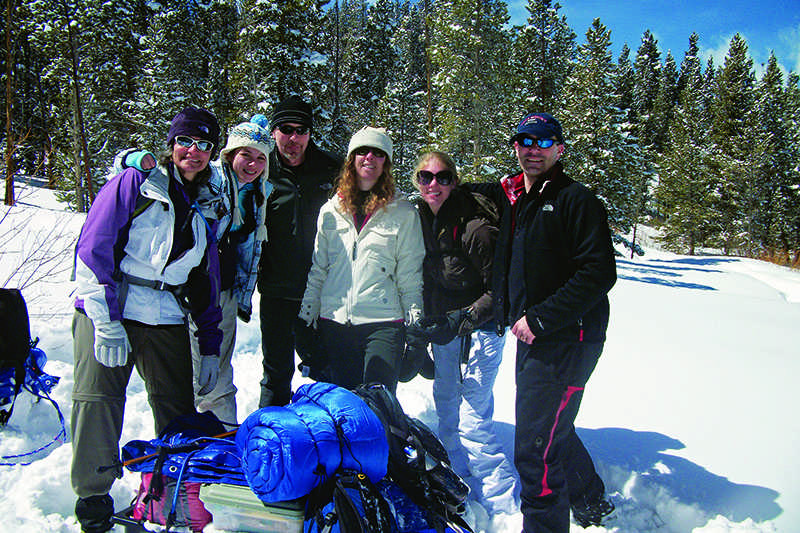 Back at the car, we considered getting a hotel room and trying again in the morning, but it was spring break, so no rooms were available. We decided to check out the one-mile trail. It was now about 3 p.m., and we were discussing our options when a cross-country skier came down from the trail. He said the snow was packed, and it would be “easy” to get to the cabin. We were inspired, but after snowshoeing for an hour, I was getting really tired and asked my wife to help pull the sled. The trail wasn’t exactly as “packed down” as the skier had indicated. Nicole and Megan helped Matt pull his sled, while Susie acted as our lookout. What were we thinking? With a 20% grade, this trail only went one way: straight up! It was so tiring pulling the heavy sled that we had to take a break every other minute. I was worried that we wouldn’t arrive at the cabin before nightfall. Was I going to have to remember survival tips I’d read once in a magazine? Finally, after more than two hours of very slow snowshoeing, we could see the cabin in the fading light at the top of a hill. We literally had to crawl up the last 100 yards, digging our snowshoe spikes into the snow to make sure the weight of the sleds wouldn’t drag us back down. I’ve never been so exhausted in my life, but we made it! The rustic, two-story log cabin was awesome. It had room for 20 people, a wood stove and a gas range. Fresh snow was our water source. The outhouse was even inside. That’s what I call mountain luxury! 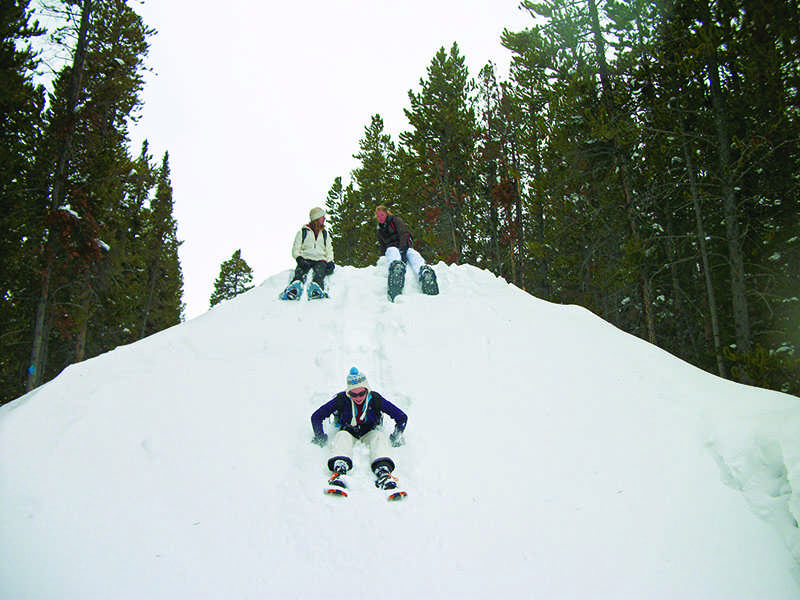 The next day we woke up to a blizzard, so we decided to stay inside relaxing, talking, playing games, drinking hot chocolate and just enjoying the beauty of the mountains and the peacefulness that a cabin can bring. There were some unoccupied rooms, and I assumed that whoever made that reservation would never make it in the storm. But that afternoon, two families came up the hill with several children less than 10 years old, and the adults towed sleds as if they were weightless. It turned out that these 20-something parents were volunteers for Colorado’s Alpine Rescue Team. They later said that they came to this cabin because it was “the easiest one to get to with little kids.” I declined to tell them that our walk was the most physically demanding experience of my life. Everybody we met at the cabin was friendly, and we engaged in interesting conversations. (Somehow, it is easier to bond while in a cabin.) It was also great to spend time with my daughters without interruptions from cell phones, text messages, e-mails or other distractions. They wouldn’t be kids much longer, so I treasured this opportunity. The next day, it was easy to get down the hill, and from the reverse perspective, we were amazed that we’d actually made it. To this day, I fondly remember the family time, the beauty of the wilderness, and going to the brink of our physical capabilities to conquer the mountain. Someday, I hope to live in a cabin in the mountains, preferably one that does not require crawling to get to the front door.

Every issue of Cabin Living magazine features at least two “My Cabin” stories, which are reader-submitted stories and photos. Send your cabin story to: cabinliving@aimmedia.com, and your Cabin Living editors may publish it. (All that is needed is a brief story about your cabin, cottage, lake home or camp – how you came to own it, why it’s special to you, and what you enjoy doing there. Photos need to be high-resolution.) Thank you!