Q) My cabin has many large south-facing windows. An aggressive robin has been banging away at the glass for days. I’ve tried the hawk-shadow decals but they don’t seem to work. Any suggestions?

In the past, a robin (Same one? Who can tell?) has built a nest on top of my porch light. I have put a homemade cone on top of the light after the nesting period but it just re-nests on another light. I have 10 lights in all, and she just moves on to the next one. Kind of messy, but tolerable, until she nests on one of the lights by the deck. Then we get dive-bombed. Any solutions? – Greg Jeseritz, via Facebook 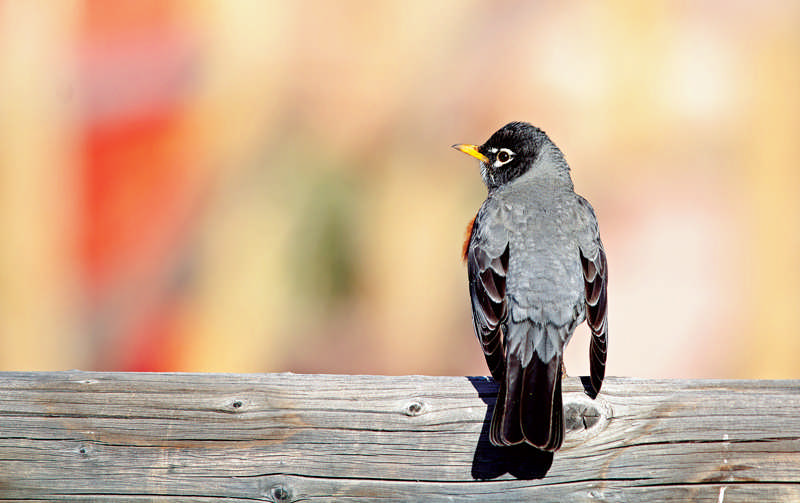 A) Usually behavior like this from birds is a territorial reaction, according to Josh Sparks, a wildlife and animal control expert at Sparks’ Ark Animal Services in New Gloucester, Maine. “They see their reflection and think it is another bird and try to drive it away,” Sparks says. “It usually happens only in spring and summer, during the breeding and nesting period.” The key, Sparks says, is to modify the environment so the birds won’t nest there. You’re on the right track so far, though it sounds like covering all the lights (aka nesting posts) isn’t feasible. The reason your fake hawk decals aren’t working, Sparks says, is that they usually have to be moved around repeatedly; otherwise, the pesky birds actually figure out that they’re fake. Hanging pieces of tin foil or balloons near the windows that will move in the breeze could keep the birds away, and can also work for anyone having problems with woodpeckers banging on wood siding, Sparks says. Covering the windows might be ideal for this particular problem, but not so ideal if you’d like to be able to see through them. One way to have it both ways is to use a product like CollidEscape, which is recommended by many sources. CollidEscape is a window film that adheres to the external pane of the window to eliminate that reflection the bird is attacking. But from the inside, your window still gives an unencumbered view out. “CollidEscape has other additional benefits, including eliminating migratory and flight-path bird deaths from strikes, and can afford energy savings as well as a privacy barrier to protect from others viewing into your property,” Jeff Rank, the company’s specialty program director, told Cabin Living in an email. For more information, see collidescape.org. Many consider the American robin’s bright red breast a sign of spring, making it a popular song bird. Fun fact: According to Birds & Blooms magazine, the American robin is one of the first birds to sing in the morning because it responds to a lower level of light than other species.
★