A builder and his friends breathe new life into an old Montana cabin.

The cabin balances weathered wood on the outside with clean, bright spaces on the inside. Facing the house toward the south, investing in quality windows and building in thermal mass all contribute to comfort and energy efficiency. The open floor plan is easier to heat.

Off the kitchen is a bright breakfast nook with a generously sized window for light and warmth. Lofted ceilings in the kitchen help the space seem airy and bright.
Floor tiles are set over 1.5 inches of lightweight concrete, and the whole mass is heated with radiant floor tubing. Reclaimed oak from a Kentucky distillery makes a textured backdrop in the master bedroom of Bryan Grace’s Montana home.

The outside of the house is clad in reclaimed barn board, which Grace tracked down at old buildings in the area. It’s supplemented with wood milled on site. Rough, reclaimed wood lends a warm, pleasing texture to the exterior. Using salvaged materials was key to holding down construction costs and helping new parts of the house blend in with the old. Visually, the exterior is divided into three sections: the original cabin with a shingled exterior, the main part of the house with reclaimed barn board siding and the entry with cladding of reclaimed corrugated steel.

Written by Scott Gibson
Photography by Heidi Long
In an age of big houses and bigger construction budgets, Bryan Grace had a different plan: build a modestly sized house that could grow as his needs changed, do most of the work himself, and incorporate as much reclaimed building materials as possible.  The result is a nearly 1,400-square-foot, three-bedroom home that blends energy efficiency and resourcefulness in a unique, contemporary design – all at $50 a square foot

Grace’s journey began in 2008 when he bought a piece of land from two childhood friends who had settled near Whitefish, Montana. Dave Radatti and Jason Pohlman had launched a construction company there called Mindful Designs. The trio had grown up together in Upstate New York, and when Grace decided to join them in Montana, he not only landed a job with their company but also found the beginnings of a new home.


There wasn’t much equity in the lot and its 450-square-foot cabin – not enough to nail down bank financing for the purchase. In order to win a loan, Radatti and Grace put together plans for expanding the cabin into a full-size house, and Grace took the proposal to the bank.
“They supported me on it,” he says, “and as soon as they did that, I put the shovel in the ground, and the race was on.” A year later, the house was complete.

By day, Grace worked as a carpenter for Mindful Designs. In the evenings and on weekends, he and Radatti began building. In the beginning, Grace leaned heavily on Radatti’s framing and engineering experience, but eventually he was able to  take over the project himself.
Grace knew exactly what he wanted from the start: low utility bills, an efficient use of space and a style that captured the spirit of where he lived. “At the beginning of the project, I saw exactly what I see now,” he says. “The cabin really lent itself to what the house is now.”


Although the house looks rustic, it takes advantage of up-to-date materials and building practices. The foundation is made from insulated concrete forms, which combine foam insulation for warmth with concrete and steel for structural support. Rather than purchase a heat-recovery ventilator, now standard in tight houses, Grace designed his own ventilation system that keeps the crawlspace warm while providing fresh air for the rest of the house.
Grace installed tubing for radiant floor heat in a 1.5-inch bed of lightweight concrete, oriented the house for passive-solar gain and took advantage of very low electricity rates by installing an electric boiler for heat and hot water. Solar panels are an option down the road.
Insulating the house with spray foam was too expensive, so Grace opted for fiberglass batts. The roof is insulated to R-63 and the walls to R-21.
“It was a balance between cost effectiveness and keeping the building simple,” Grace says. “I wanted an efficient use of space, and all that would translate in the future to efficient utility costs and heating bills.” 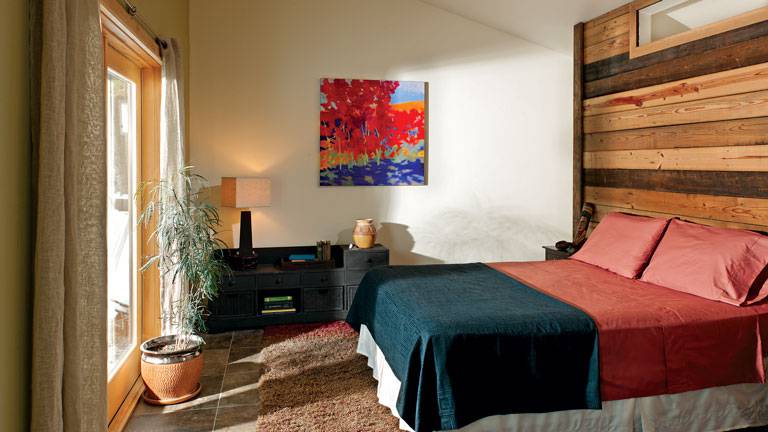 Using salvaged materials was partly a matter of budget, but it also was a way of honoring the origins of the house. “It’s a product of the times and the area that we’re in,” Radatti says. “We’re here in Whitefish, Mont., and those were materials that were used by the previous generation and the generation before that when they were settling this area, and now we live in a time when we can take those buildings down and rebuild them into new forms.”
Grace scouted old barns and mills in the area for siding. He supplemented that with lumber milled from trees on site. He tapped into a network of friends and work acquaintances. (Wall rock, for example, came from an excavator friend who was working on an access road at a nearby ski resort.) Grace also purchased some reclaimed materials from Wild Wood Eccentrics, a local dealer.
The unusual interior trim is spalted birch milled from standing dead trees at a friend’s house in town. Once they began taking down the trees, Grace realized they’d stumbled onto something special.
“We really lucked out,” Grace says, “and once again, that’s not something I went to the lumberyard for.”
Grace lives in the house by himself, but he thinks the three-bedroom, two-and-a-half-bath layout would work for a small family. Should he find himself with a growing family of his own, Grace says the house could be expanded. But he intentionally started with something small.
“What I wanted to do was evolve with the space,” he says. “I don’t envision ever having to get rid of this property, and if I was going to add onto the house, I wanted to grow with it as I lived in it. I wanted to start with a small, manageable footprint.”