My First Ride on an ATV

My First Ride on an ATV

A first ride on an ATV, when properly trained and supervised, is a safe and fun ride. 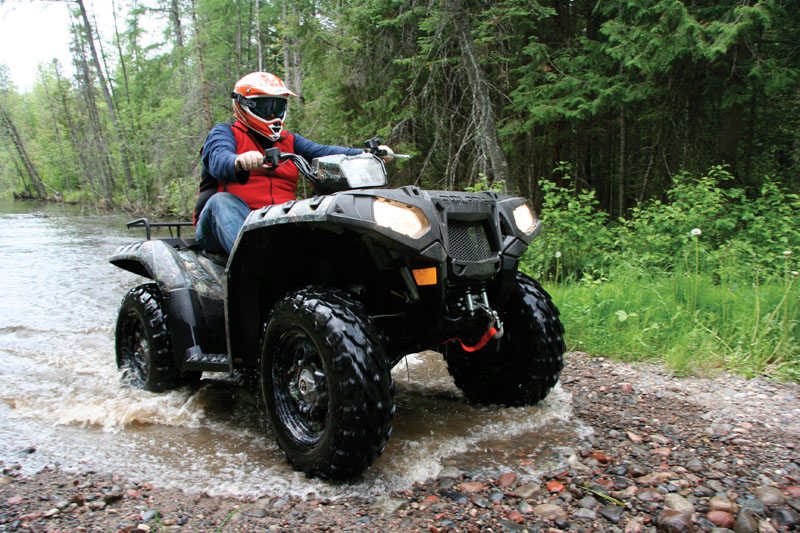 Do you have any experience with ATVs?” Todd “Starter” LePage had asked me this after a few minutes of watching me struggle to squeeze my head into a helmet. Fumbling with the chinstrap as I was, I had no choice but to answer honestly. “Nope.” Starter looked at me like I was a new, pathetic species of tick he’d never seen before. “Motorcycles? Tractors? Anything with a motor?” he asked. My answer was the same. Nope. Nothing. Nada. But that was my assignment, to document my first time on an ATV in an attempt to show how, when properly trained and supervised, a safe ride and a fun ride don’t have to be mutually exclusive for a novice like me. "My little girl rides ATVs; maybe she can show you a thing or two,” Starter said, laughing.

The morning of our test ride, Starter took me to a dirt practice course to show me the ropes before we headed off into the wilds of northern Minnesota.

After a thorough explanation of how the ATV worked and what each button and lever in front of me did, I promptly forgot it all in that first adrenaline-firing turn of the key. As the engine roared to life, the rumble shook something loose in me, something primal. I wanted to gun it and feel the wind whipping past me. I wanted to find the biggest jump I could find and soar over it.

Thankfully, Starter was there to bring me back to reality and remind me that I wasn’t going anywhere if I didn’t put it in gear.

He headed out in front of me, driving his UTV with his little girl riding shotgun and his dog in the mini-flatbed. Even the dog seemed to be judging me as I twisted the handlebar grip in vain, trying to speed after him.

After about a minute, the UTV reversed back to me and Starter reminded me that the throttle was a thumb lever, and that I should probably stop wrenching on the handlebars of the brand-new Polaris model I was riding.

Finally, I was off. Riding at a brisk 5 miles per hour, I felt free and happy. After several lazy loops around the practice course, he parked and let me do a few on my own, where I cautiously opened up the throttle.

It only took minutes for me to get the hang of the controls. What at first had felt foreign now felt intuitive and well designed. My body adjusted instinctively to the ride, shifting my weight to counterbalance turns and leaning forward or even standing when climbing up a grade.

After a few more minutes of this, I pulled up next to the UTV and glanced over at Starter. His little girl looked bored. It was time to go for a real ride.

See also The Joy of Riding an ATV 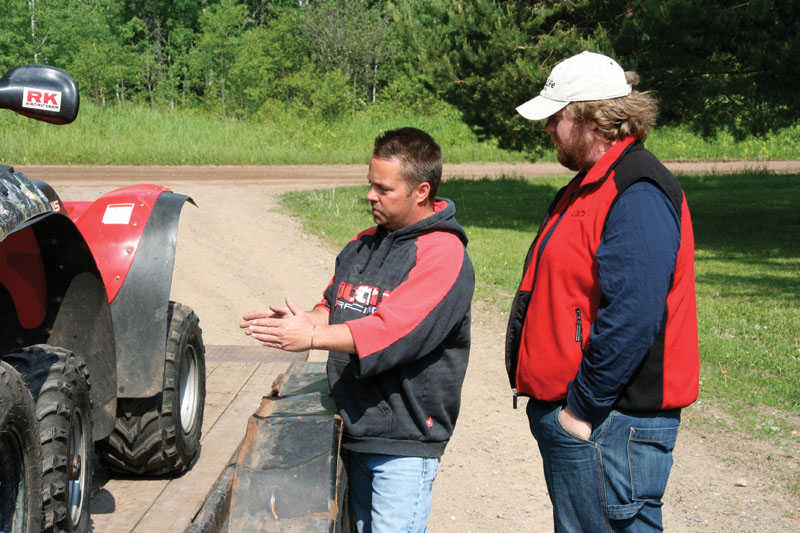 Before long, we were deep in the woods, riding along a well-worn trail that wove through thick stands of trees. All I could hear was the low purr of the engine. It was peaceful. I felt like a modern-day cowboy, out on my own in the dangerous wild with just my wits to keep me safe.

Then I glanced at the UTV ahead of me. Starter had one arm casually draped around his little girl. The dog in the back was yawning. Clearly “dangerous” is a relative term.

Just when I was starting to feel like I was being handled with kid gloves, I noticed we were passing a road sign out here in the woods. The sign read, “Road Under Water.”
Uh-oh. 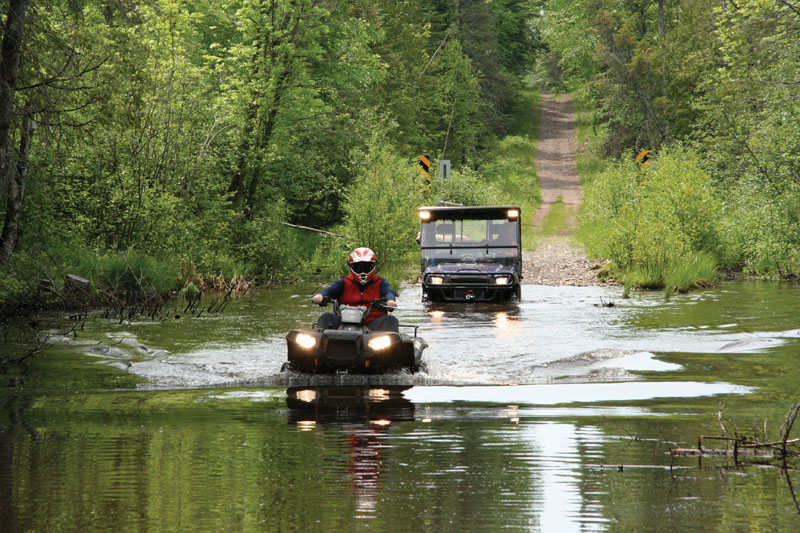 I watched with horror as we approached a portion of the trail that was flooded by water that seemed easily 20 feet deep. As we got closer, however, I realized it was more like 2 feet deep, but still, this was not something I did on a regular basis.

I gritted my teeth and plunged ahead, watching as the water rose up the side of the ATV. I lifted my feet up and placed them on the wheel wells. Never once did the engine give any hint of struggle. My machine churned through that water as easily as a knife through melted butter. It was fantastic. 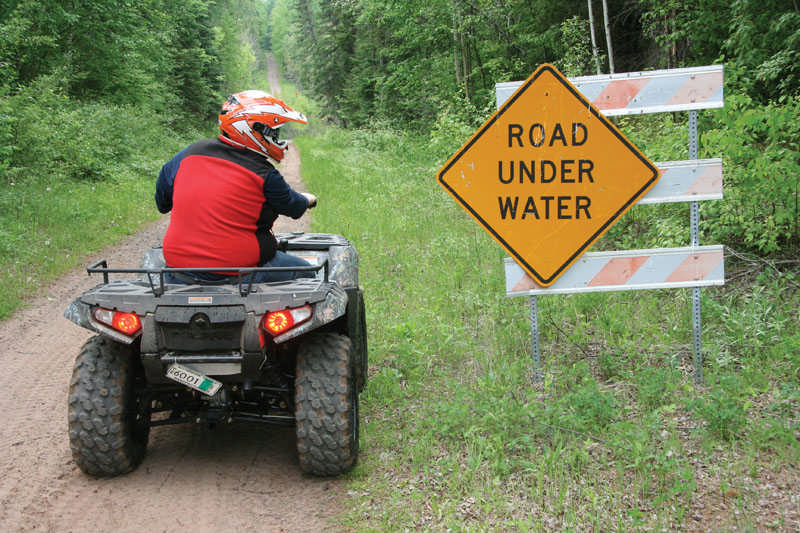 After that first taste of advanced riding, I wanted more. Happy to oblige, Starter took me through the thick stuff, up and over steep inclines and over teeth-rattling rough terrain.

As a grand finale, he led the way through a patch of mud so thick and soupy I thought I’d never see civilization again. He casually extended a hand out of his UTV and held up four fingers. It was a signal he had drilled me on.

I flipped the switch on the handlebars from 2WD to 4WD and stood up. Before I knew it, I was surging up the bank, the tires flinging mud with wild abandon. It was almost too easy. And far too much fun. I couldn’t stop smiling. 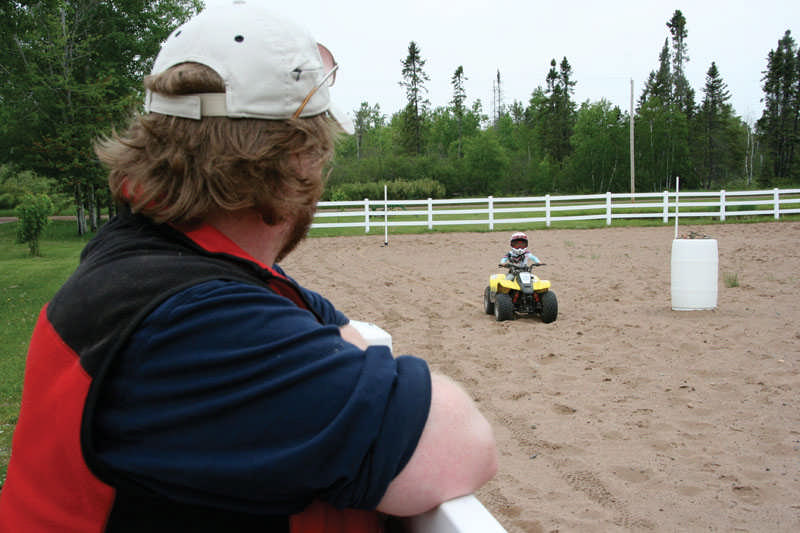 All Good Things Must End

After hours of riding that felt like minutes, we returned to civilization and I turned off the engine on my new best friend.

My mentor, Todd Starter LePage, had gotten his nickname because he was the one you came to if you couldn’t get an engine to work. Todd could get anything to start.

He had started up something inside me, too. I was already trying to figure out which sales pitch to give my wife.

My first ride had gotten me hooked. I wanted my own ATV.

ABOUT OUR AUTHOR
Andy Bennett doesn’t like driving his car anymore. It’s too boring.
★