Peek inside this imaginative cabin on the Pemigewasset River that was built with equal parts creativity and determination.

ADDING CHARM – Blue kitchen chairs are historic replicas with an antique patina, made by Bob’s brother Richard Brustlin, a high-end furniture maker in California. The plate rack is old chestnut. Cutouts in the staircase balusters are shaped like the cabin’s peaked gables. Builder Dale Blackey cut lines along the balustrade to represent the river.

HEARTH – A massive stone fireplace is the focal point of the great room. The Brustlins decided against continuing the stone to the ceiling so the room would not appear dark. COME VISIT! – Bob made two mahogany Adirondack chairs for the front porch. Kathy says the neighbors know she and Bob are at the cabin when the chairs appear outside. RIVER DESIGN – The Brustlins wanted their chimney to be part stone, part brick. So after studying the nearby Pemigewasset River for a few months, the mason came up with a design. The bricks “flow” around the stone like water flows around the stones in the river. Photos by Joe St. Pierre, courtesy Samyn-D’Elia Architects
In the summer, Bob and Kathy Brustlin like drinks on the rocks. So after a day of tubing the Pemi, they plop quad chairs in the river and chill out with wine and cheese.
The “Pemi,” as locals call the boulder-strewn Pemigewasset River, flows just below the Brustlins’ deck. Ankle-deep in August, the water refreshes both soul and sole. “It’s colder than the ocean,” exclaims Kathy (which says a lot, coming from a native Mainer).

In the winter, the gurgling river is silent beneath slabs of ice. After snowmelt, though, the Pemi roars. It can rise 8 feet or more in spring, when white-water kayakers run the rapids. No matter the season, the sights and sounds of “River TV,” as a friend dubbed it, are an endless source of entertainment for the couple and their guests. So are the recreational opportunities in this neck of the woods. 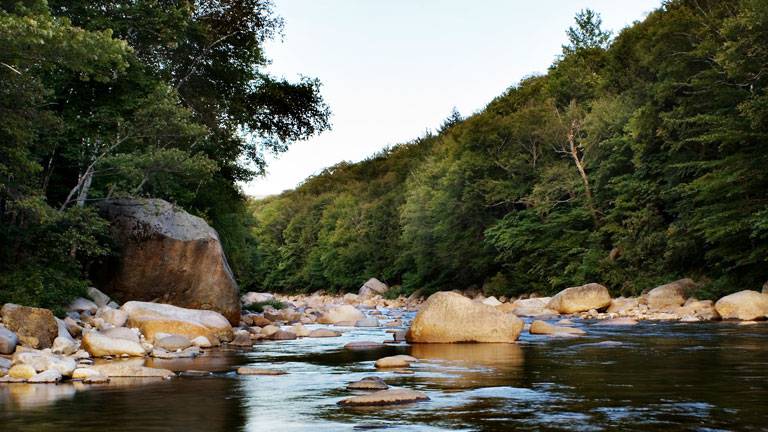 Where a Cabin Feels at Home

“We’re in White Mountains Central,” says Kathy. “The last development before national forest.” The region is a hiker’s paradise, with hundreds of miles of trails. During winter, Loon Mountain Ski Resort is a major draw. To the east looms Mount Washington.
At 6,288 feet elevation, this is the highest peak in the northeastern U.S. – with notoriously extreme weather. Franconia Notch, a dramatic 2,000-feet-high pass through the White Mountains, lies a few miles to the northwest. Friends with children use the cabin as a launchpad for Story Land and Santa’s Village – two other New Hampshire attractions.
Both Bob and Kathy vacationed year-round in the area before they met. “We love it here,” she says. After they wed, the Brustlins continued to visit from their home in Newburyport, Mass. They stayed with friends, dreaming of their own nest. So when they heard of a new development on the north side of Loon Mountain, they leapt at the chance.

In 2004, the couple purchased a quarter-acre lot on a terrace overlooking the river, just above the flood plain. Since the lot is long and narrow, the Brustlins wanted a small retreat that would complement, rather than overwhelm, the site. Bob, a civil engineer, sketched designs and roof pitches.

The couple brought the sketches to Ward D’Elia, AIA, of Samyn-D’Elia Architects in nearby Ashland, N.H. They also brought a stack of magazines and design books. Their influences included: classic Victorian lakehomes at Lake Winnipesaukee and Squam Lake, with multiple gables and wood-shingled exteriors; steep-pitched roof-lines of Swiss chalets; and woodsy Maine camps with exposed rafters.

“Bob brought more style and understanding of what he and Kathy liked, which was very cabin-like in its appeal,” D’Elia recalls.
A floor plan evolved over the course of three or four meetings. “There was a fair amount of time and modification in the design process,” says D’Elia. “The house is pretty small. Getting everything to work – stairs, kitchen, appliances, passageways, mudroom, garage – was a challenge. All those spaces are pretty compact, and everything had to fit perfectly.”
D’Elia also had to factor in setback requirements, since the couple wanted to be as close to the river as possible. “The challenge was to get a well, a septic field, and the footprint to all fit comfortably, and with not a lot of leeway,” he says. 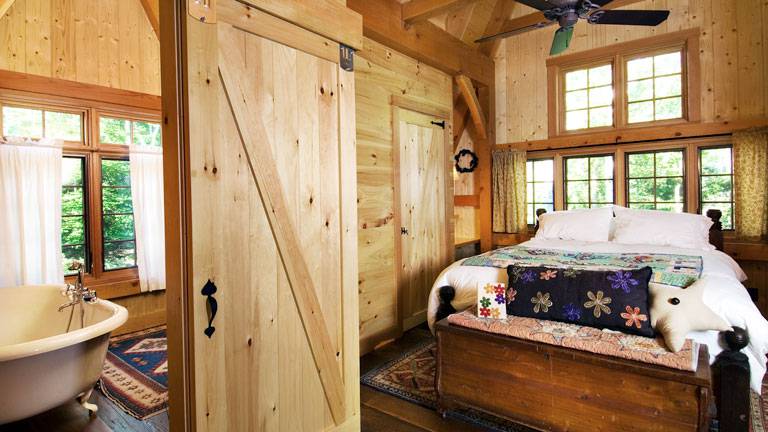 A foundation was poured in the fall of 2004. The following January, Dale Blackey’s crew from Twin Oaks Construction in Plymouth, N.H., got underway. By October, the nest was ready to feather. “The builder was very particular,” notes Bob. “Twin Oaks did a wonderful job, especially with the woodwork.”
Which makes Bob, a self-confessed “wood junkie,” very happy.
“We purposely made this place entirely out of wood,” he says, adding that he loves the warmth and coziness. A woodworker by avocation, Bob built a lot of the furniture, including the bed in the master bedroom and the vanity in the master bath. He also designed the staircase with its gable-shaped cutouts.
The small retreat appears larger than 1,600 square feet, thanks to an almost vertical roof. From the outside, the roof is dramatic. At a story-and-a-half, it encompasses much of the cabin. In fact, the pitch is so steep at 24/12 (twice as steep as a more conventional 12/12 roof) that the roofer initially walked away from the job. (He was persuaded to return.) Since it was too steep to walk on, scaffolding had to be erected. The pitch also drove up the cost of installing roof vents.

But Bob was undeterred. “The roof is a critical part of the design,” he stresses. “The footprint is relatively small, but we wanted to have an upstairs entirely within that roof. Not only do we get that shingle-style roof, we get more space upstairs because the roof is steeper.” The great room ceiling is open to the rafters, with a spectacular granite fireplace built by Vince Libby of Plymouth, N.H. 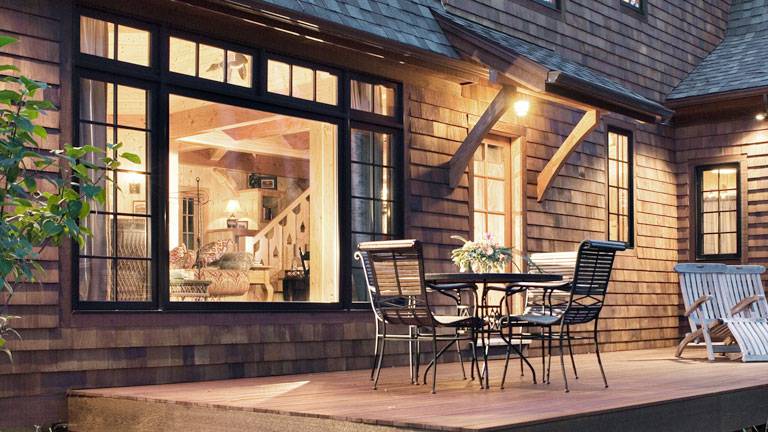 The Brustlins’ place may be small, but it’s designed for entertaining. “We’ve had as many as 35 here at a time,” says Kathy. “With the open concept, people flow onto the porch, or into the great room around the fireplace.”
Friends and family members are frequent visitors; Bob’s adult children come whenever possible. (Both raced on the Loon ski team as youngsters.)
There are two suites on the second floor, each with a bedroom, sitting area and bath. “My brother has a family of five,” says Kathy, “and there’s enough room for them in the sitting room.” The small “sleeping closet” in the master suite, decorated with old postcards of the White Mountains, is her favorite place. “People like to come here and hang out.” The younger crowd gravitates to the third-story loft, accessible by a ship’s ladder. “We send pizza and their hors d’oeuvres upstairs,” she laughs.

On weekends when Kathy and Bob are not enjoying River TV, the outdoorsy couple sails the coast of Maine. But their retreat at Loon Mountain holds a special place in their hearts. “We like it here as much in summer as in winter,” says Kathy. “It’s so much more relaxing than our coastal life in Maine.” 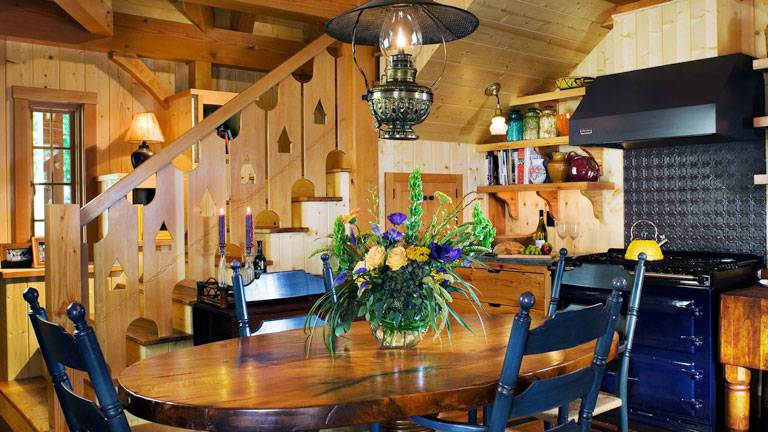 This cabin is a great example of living large in less than 2,000 square feet. Here are some tips for feathering your own cozy nest: 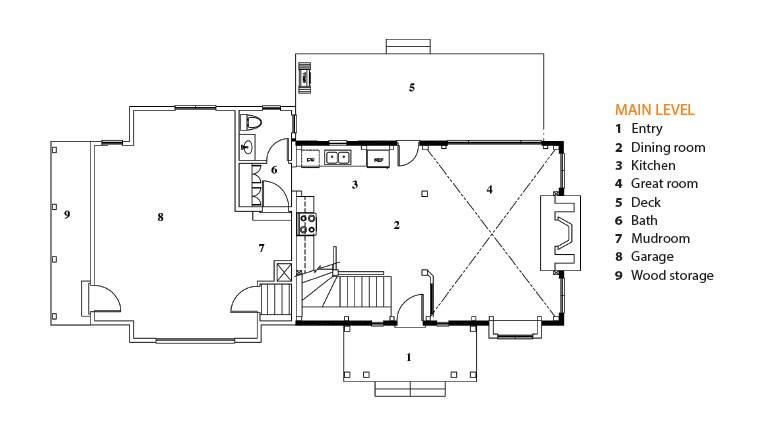 A Cabin Full of Food: How to fill your pantry and…
Shop now at Amazon.com