Off the grid but with all the comforts of home. 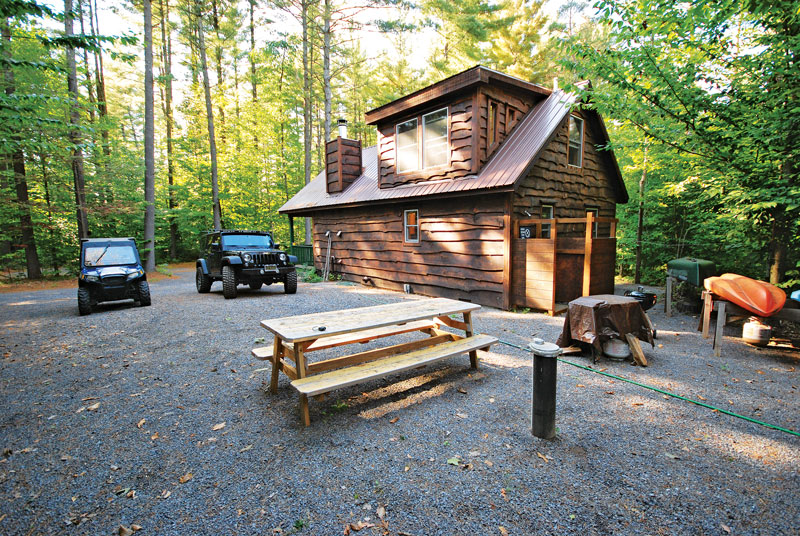 Exterior Adirondack, aka live edge, siding sets a rustic tone.
By Fran Sugurdsson
Just because a cabin is unplugged, doesn’t mean it can’t have all the comforts of home. Take Mike and Sylvia Mabunay’s hideaway in Lewis County, N.Y. With hot and cold running water, a propane furnace, and enough power to run a hair dryer, “You don’t feel like you’re off the grid at all,” says Sylvia. Since 2012, the backwoods cabin has been second home to the New Jersey couple. For years, the Mabunays dreamed of a place to unwind from high-tech corporate jobs. On the wish list: A four-season retreat where they could hike, kayak, and indulge a newfound passion for snowmobiling. A 5-acre lot for sale in the western Adirondack foothills ticked all the boxes. “It spoke to me,” Mike recalls about seeing the property. “It all came together – the location, the community. It’s a gorgeous little spot.” 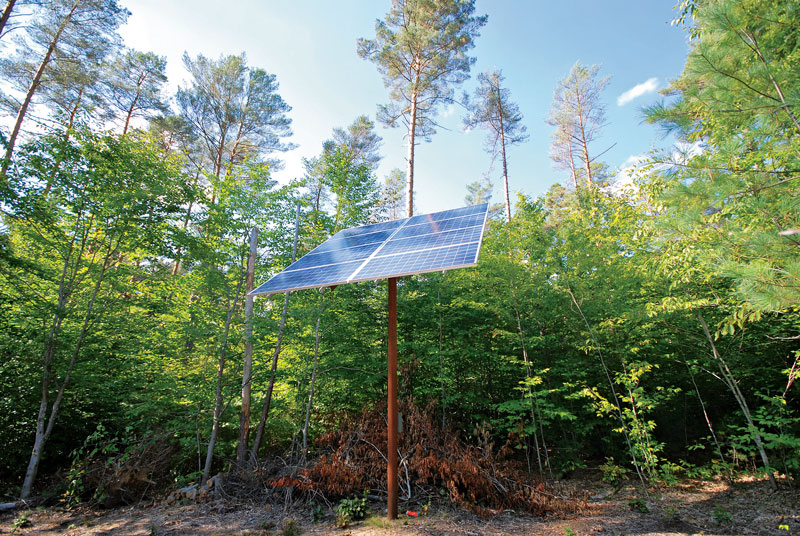 In summer, the pole-mounted solar panels are angled to generate maximum power. (Other energy notes: Standard batt insulation in the walls has a rating of R-21, and R-38 in the ceiling. Standard light fixtures use LED energy-efficient bulbs. A shed houses the EcoGen, a Magnum 4024 (4,000-watt, 24-volt) inverter, and battery bank.)
Just outside the Blue Line, the lot backs up to Otter Creek State Forest and the Adirondack Park. “We’re in the middle of towering white and red pine stands,” says Sylvia. “It’s so therapeutic to walk those trails.” The property is accessible via a seasonal road, which is also an ATV trail in summer and part of a groomed snowmobile trail system in winter. “You wouldn’t be able to cross-country ski as far as you can on snowmobile,” notes Sylvia. “The winter is beautiful. You’re in a snow globe.” After purchasing the land in February 2012, Mike contracted with Dean Case of Adirondack Builders in West Leyden, N.Y. “Mike wanted a custom Adirondack-style design,” says Case. “The cabin has heavy timbers, cultured stonework, and rustic hardwood floors.” 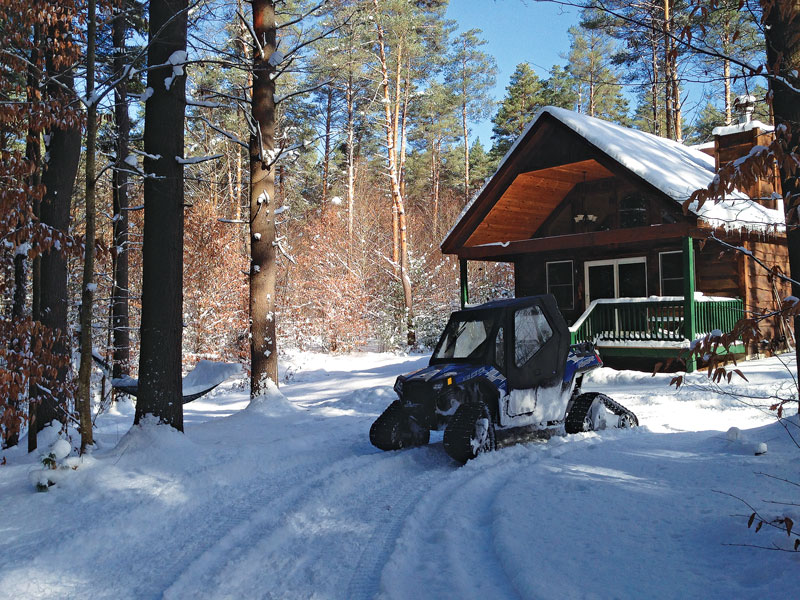 The Mabunays’ Polaris RzR UTV is a helpful workhorse on their property. In winter, the wheels are replaced with tracks.
Completed by June, the cabin’s rectangular layout maximizes 900 square feet of living space. The front porch opens into a 15x20-foot great room. A stacked stone fireplace with wood-burning insert warms the Mabunays and guests as they recount the day’s adventures. A forced hot-air system keeps this cold-climate cabin cozy in winter.
At the rear of the cabin, tucked behind stairs leading to a sleeping loft, is a 10x11-foot bedroom. A tiled bathroom and a kitchen with white pine custom cabinets, propane fridge and range are across from the bedroom. Since the cabin is a good mile from the nearest utility pole, Mike needed an alternative source of power. At home, the Mabunays rely on a Generac generator to combat power outages. So Mike asked Generac dealer Jim Kiernan in Brantingham to install an EcoGen model.
The cabin’s 1,000-gallon propane tank is filled in April and October. But with the generator on auto-start, there was a risk of fuel running low in winter when the seasonal road closed. In 2013, Mike asked Ray Falk of Suntric Renewable Electricity in Beaver Falls, N.Y., to add a solar array. Falk installed eight 300-watt panels. “I sized it big because of tree cover,” explains Falk, who first had to clear an area for the pole-mounted panels. “The shade of a tree branch will significantly reduce the amount of electricity produced.” (So will snow. In winter, the panels are tilted vertically to avoid accumulations.) The following year, propane usage dropped from 650 gallons pre-solar to 65 post-solar, he notes. 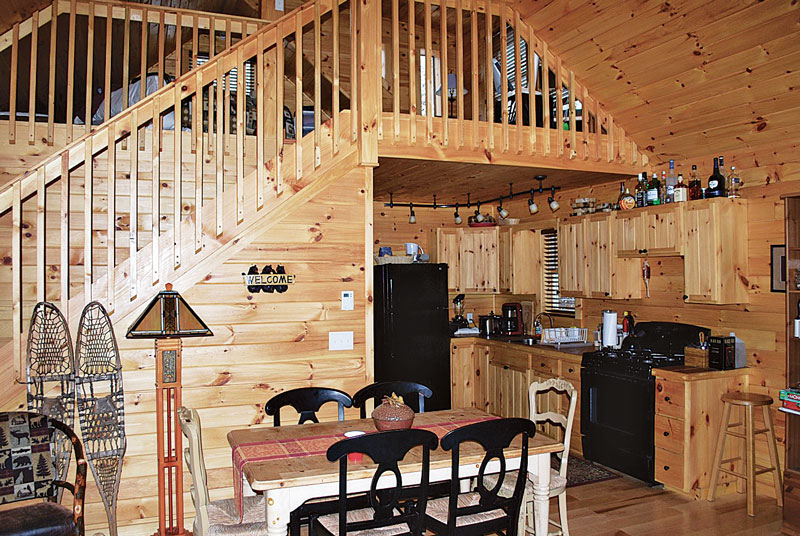 The woodsy interior features knotty pine walls and ceilings, with maple flooring.
As remote as the cabin is, the hamlet of Brantingham is minutes away, along with an 18-hole golf course and Brantingham Lake, popular with boaters and anglers. The Mabunays enjoy paddling in nearby Catspaw Lake. And Mike and Sylvia have two dogs, Cooper and Maddie, that spend their summers swimming in Otter Creek. When the couple’s son, an avid fly fisherman, visits with his wife and baby, he too makes a beeline for the creek – and its hungry brookies. The Mabunays’ grown daughter and Sylvia’s parents visit whenever possible. So do friends and Mike’s college buddies. (One liked it so much he bought two adjacent lots.) “It’s not the cabin per se. People love the experiences, the memories made and shared,” Mike says. In our book, that’s what cabin living is all about.

The Mabunays chose the Generac EcoGen generator for their off-grid cabin because the model is specifically designed to supplement alternative energy systems.
“The first of its kind, the EcoGen is 25% more efficient than the typical standby generator,” claims Jake Thomas, director of product management for Generac Power Systems.
What makes it different? Typical standby generators for on-grid households fire up when the power goes out, then shut off when power is restored. The EcoGen ties into an inverter and a battery storage center to generate power and recharge batteries. When battery power from solar or wind systems drops too low, the inverter signals the EcoGen to start. The 6-kilowatt 120-volt belt-driven model like the one at the Mabunays’ cabin was introduced in 2010. A 240-volt conversion kit is optional.
“We converted Mike’s off the bat to 240 for the well pump,” says Generac’s Jim Kiernan. “Basically, 240 gives you more of a balanced load. You’re hooking to a regular circuit panel box.”
A 15kW 240-volt model was introduced in 2014 to keep up with advances in off-grid energy systems. “A lot of inverters used in alternative energy have gone to 240 volts for greater output,” says Thomas. Patented G-Flex technology allows this model to run at varying speeds, depending on demand. The result is better fuel economy and quieter operation. Regular standby generators require servicing every 100-200 hours. “Because the EcoGen has a built-in oil reservoir, it only requires servicing every 500 hours,” notes Kiernan.
The EcoGen also comes with a 3-year/2,000-hour warranty when used off-grid in an alternative energy system. Possibly best of all, the EcoGen is significantly quieter than the average generator, because when you’re at the cabin, the last thing you want to hear is a generator screaming. At normal loads, the EcoGen 15kW is 63 decibels, says Thomas. “Perceptionwise, it sounds a lot quieter. An integral resonator changes the tone so it’s softer and more pleasing to the ear.”

This Cabin is Off Grid, Over the Border

Off the Grid in the Rockies