In the Name of Preservation

Three ways to rehab (not rebuild!) and preserve old cabins. 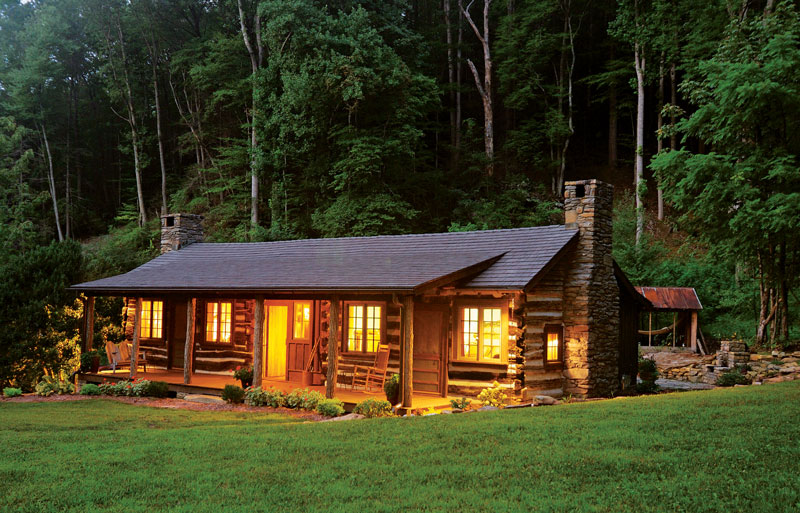 In this project, the original two cabins were made into a living room and a bedroom. A new addition at the rear features a kitchen, bath, mudroom, and laundry with stackable washer and dryer. The dogtrot was rebuilt to be more transparent with door and windows. Half of it features exposed handhewn logs; the other half is sided with chestnut paneling.

Bulldozing an old cabin to make way for a new one is a fairly common practice. Bucking that trend, three pros share their secrets for preserving old cabins while blending new with old.

Who says summer camp is just for kids? They may not go in for archery, but one young-at-heart Atlanta couple hit the bull’s eye in 2009. That year, Don and Sue (not their real names; the duo prefer to be anonymous) discovered a former overnight camp in North Carolina’s Blue Ridge Mountains. The 150-acre grounds offered solitude, scenic views, and cool breezes. But the property had lain abandoned for decades after the camp closed. Several major buildings and 40-odd cabins stood derelict, overtaken by weeds and wild critters. The couple, however, saw past the disrepair. Instead, they pictured a relaxing family gathering place. They also wanted to preserve what had been a local landmark. 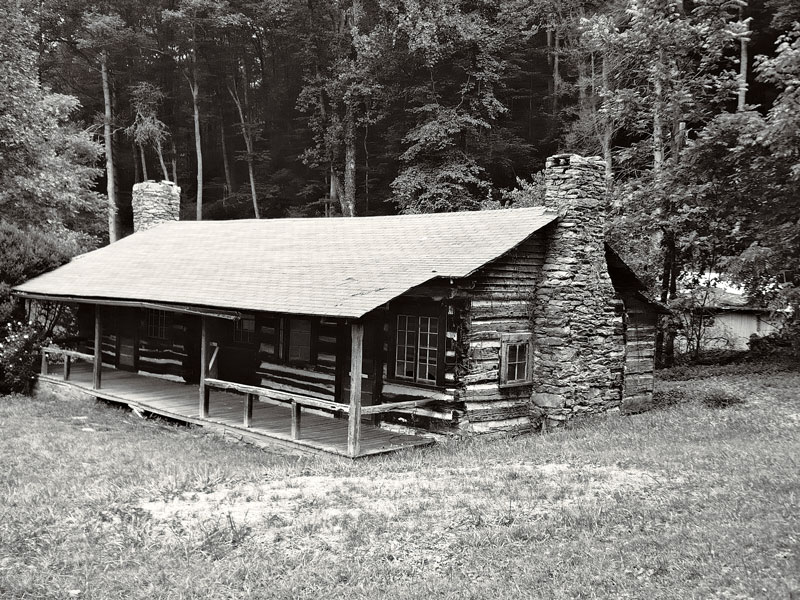 The Summer Camp - Before
Both had experience rehabbing old buildings, including their primary residence in a historic district of Atlanta. For this project, they turned to Samsel Architects in nearby Asheville. The firm is noted for historic preservation and green design. Samsel principal Duncan McPherson, AIA, helped the couple assess five or six buildings for their personal cabin. They chose a dogtrot style that once served as the camp office. “Originally, it was two small cabins on land three miles from here,” explains Don. The cabins were disassembled and brought to the site in the 1920s when the camp was founded. “That’s pretty common for pioneer log cabins in this area,” notes McPherson. “Old notches indicate where roof rafters used to be.” A breezeway joined the cabins under a common roof. The setting was idyllic, alongside a babbling creek. However, the cabin itself was literally rotting in the ground. Built a foot too low, dirt and rain played havoc with the flooring. Wilson Construction, a Fairview, N.C., company experienced in restoring old cabins, came to the rescue. The cabin was jacked up, and the foundation relaid with the original stone. Original framing was reinforced for safety. “We were able to maintain the integrity of the original shell, but upgrade to something comfortable year-round,” notes McPherson. 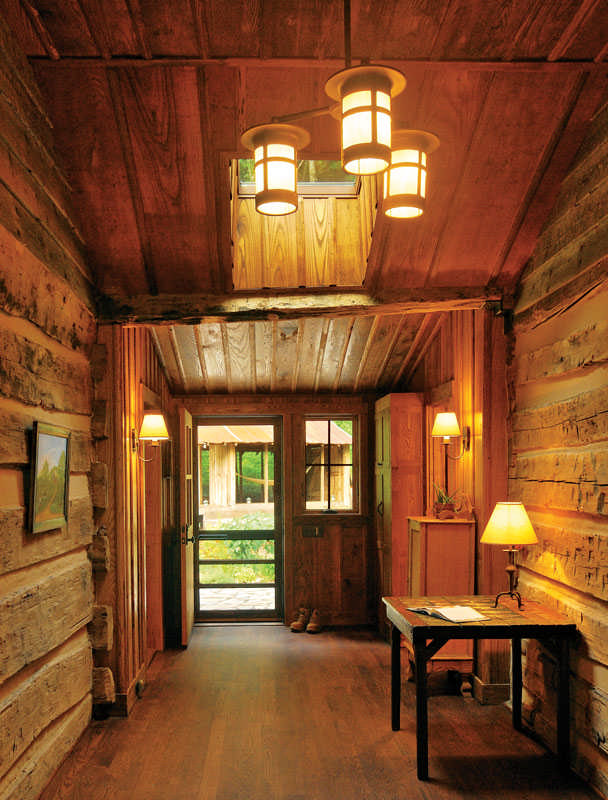 As a boy, Mark D. Johnson (no relation to CL editor Mark R. Johnson) recalls straightening old nails for his grandfather to reuse. Sophus Johnson always had a project going on his farm outside Green Bay, Wis. Probably the most ambitious one involved salvaging an old barn and annexing it to the original hand-hewn one on the property. Some of that ingenuity obviously rubbed off on the younger Johnson. In 1975, he transformed a hewn timber granary into his first home. It’s now the office of his Kasota, Minnesota-based company, Artisan Restoration. Over the years, Johnson has restored about 100 log cabins and timber-frame barns throughout the Midwest. That includes everything from repairing individual logs to disassembling and moving whole structures. He typically restores 6 or so cabins a year – the older, the better. So when Waseca, Minn., farmer Larry Hagen contacted Artisan in 2015 about restoring a 150-year-old log cabin his grandfather built, Johnson was up for the challenge. And that it was. The cabin’s roof had collapsed, and all Johnson had to go on was an old photo and Hagen’s memory. “We figured out four windows in the main level, two upstairs,” Johnson says. Just six logs from the original cabin could be reused. The rest of the logs and wood for the interior were salvaged from different locations in Minnesota and Wisconsin. The 14x16-foot log cabin was assembled at Artisan, then moved to Hagen’s farm.

See also Borrowing Money to Rebuild or Remodel a Cabin

If you pay attention, restoring an old cabin can reveal a lot about the previous owners. Sometimes the clues are in plain sight: a lost checker that rolled into a corner, say, or a dusty stack of magazines. And sometimes, they’re hidden. “I like to picture them [the former occupants] playing games or reading around the fire,” Michael Sullivan muses about his retreat on Lake Samish in Washington. A historic preservationist, Sullivan is skilled at bringing the past to life. His Tacoma firm, Artifacts Consulting, assists with the rehab of historic structures – everything from heritage barns to Hemingway’s Sun Valley house to commercial buildings. In 2005, he and wife Linda bought a two-story, 800-square-foot cabin for their weekend getaway. Two hours from home and 10 miles south of Bellingham, Samish is close enough to that city to have the Internet, notes Sullivan, but not so close to have traffic. Foothills of the Cascade Mountains ring the recreational lake. 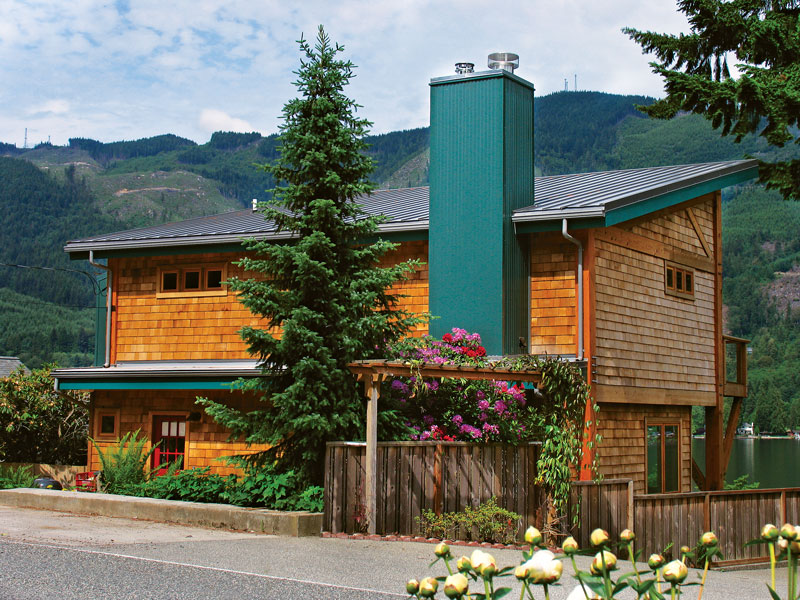 The Sullivan cabin, built in the early 1940s, is the oldest on the west side of Lake Samish, Wash. Instead of enlarging the cabin’s footprint to create more living space, the Sullivans opted to add a top floor, supported by timber framework built from salvaged Douglas fir beams.
Built in the 1940s, the cabin was drafty and in sore need of repair. The couple’s intent was to keep what they could, while adding modern building systems and living space in a green, sustainable way. Staying within the existing footprint to protect the spring-fed lake was a priority. Like other cabin owners around Samish, the Sullivans pump water from the lake and tie into the sewer system. 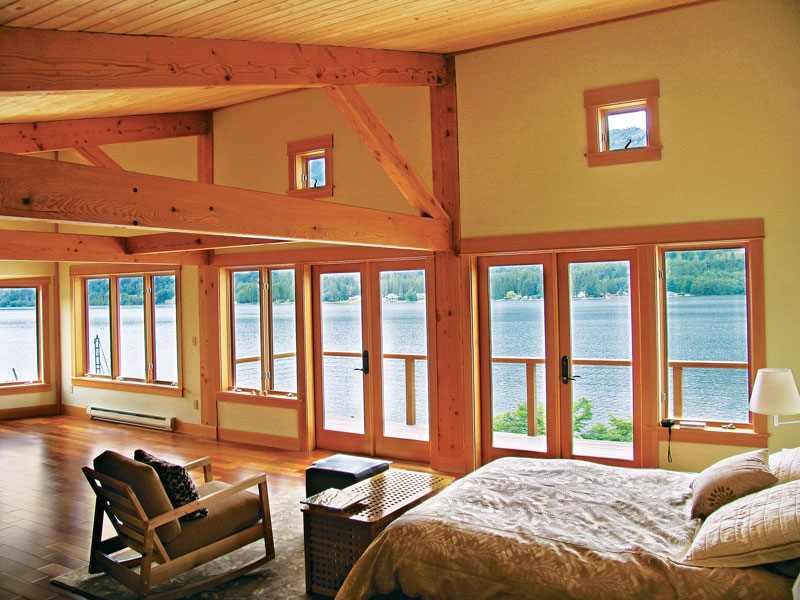 Built into a hillside with a daylight basement, the cabin’s framing would not support additional square footage. “The design solution was to build a timber-frame exoskeleton,” says Sullivan. Bob Ross, AIA, of Ross Architecture Northwest in Anacortes, Wa., prepared the construction documents. Bellingham Bay Builders in Bellingham erected the timber frame from hefty, salvaged beams. The timber framework allowed the couple to add a third-story master suite, bringing the total area to 1250 square feet. 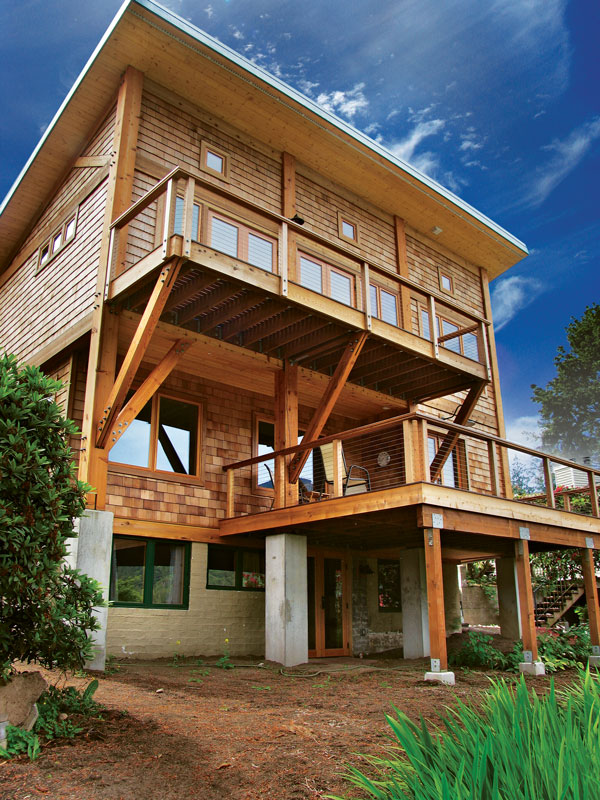 A new metal roof was put in place before the original one was removed. The result is an amalgam of an old cabin and modern timber frame.
All original building materials were reused wherever possible. “We didn’t want to lose the patina and rustic quality,” says Sullivan. When he removed interior paneling to add insulation to the walls, Sullivan was surprised to see old packing crates with mailing labels used as sheathing. “The paneling gave us names,” says Sullivan. “We know a little bit about the family who paddled around the lake in the 1950s.” Building techniques may have changed since then, but R&R at the cabin is basically the same. The favorite pastimes of this cabin’s current owners? Swimming, sailing, and paddling around the 4-mile-long lake.

“The biggest problem with any log home isn’t insulation. It’s air infiltration,” notes restoration expert Mark D. Johnson. “Handhewn logs vary in thickness, and gaps vary, from none up to four inches.” Some tips from Johnson: 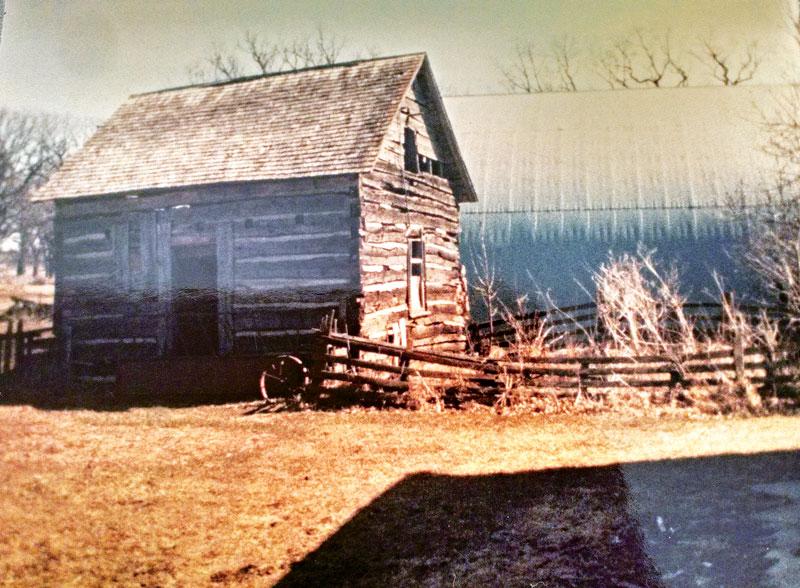 The original 14x16-foot cabin, built by Larry Hagen’s grandfather, can be seen behind the farmhouse in the old photo. Note the majestic American chestnut tree in the yard. Over the years, the cabin was used as a guest house, summer kitchen and hog house (yes, that). 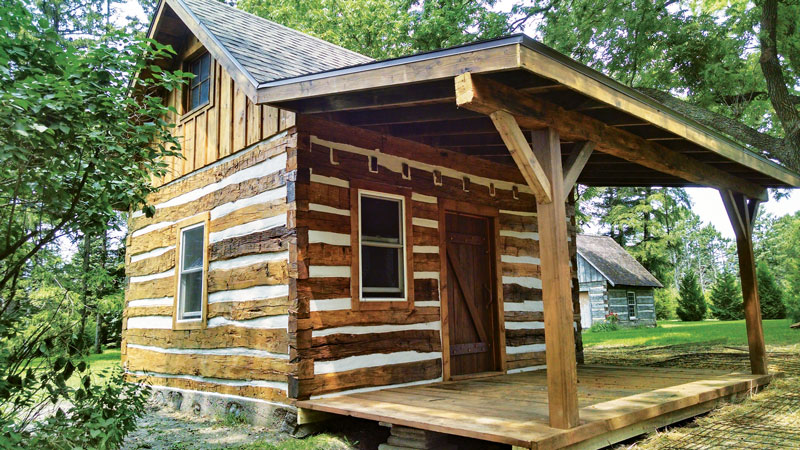 Today, Hagen plans to use the restored cabin as a guest house. During the restoration project, six logs were salvaged from the original cabin, plus reclaimed logs and barn wood from four different sites in Minnesota and Wisconsin were incorporated.

Most of us use those terms interchangeably. Technically speaking, though, they mean different things. According to the National Park Service (NPS): The NPS maintains standards for the different approaches to treating historic properties. For guidelines on fixing up an old cabin, check out nps.gov/tps/standards/four-treatments.htm.

Chestnut was the wood of choice in pioneer days. Straight-grained, light, and rot resistant, it was ideal for building cabins and barns, as well as furniture. Back then, American chestnut trees towered over the eastern U.S., reaching heights of 100 feet and 14 feet in girth. Until that is, a blight decimated the species in the early 1900s. The American Chestnut Foundation in Asheville is attempting to restore the tree species to the eastern woodlands. It seems fitting that the cabin owners agreed to have chestnut trees planted on their property to test new blight-resistant strains.
★