GREAT ROOM – The fireplace is made mostly of gray river rock from a nearby quarry. The conversation sofa and barn-wood coffee and sofa tables are from Ghostwood Interiors. LIVING ROOM – Though no major structural changes were made to the living room, distressed knotty alder doors and woodwork replace the original contemporary-style golden oak, wood blinds replace original window treatments, and a wood-burning stove was added by the rock wall. FISHING – Formerly the sunroom, the mudroom/fishing room is a small space, but it sees a lot of action. Waders and fly-fishing gear are at the ready. Brad washes the dogs here (the water sluices through the floor boards to sand below). SLEEPING – This upper bedroom includes rustic-style bunks and other furniture. BIG BLUE – The Heinrichs’ 30 acres are located on the Blue River in Silverthorne, Colo. The river is between 75–150 feet wide. Stone steps leading down to the bank allow easy access. Mark Sprague, courtesy Brad Heinrich BEETLE CONCERN – The mountain pine beetle is the scourge of the Rockies. Over three million acres in Colorado have been impacted since the most recent outbreak started in 1996. (Warmer winters and multi-year droughts are factors.) The Arapaho, Roosevelt and White River National Forests are among the hardest hit areas. The beetle infests and kills lodgepole pine trees, but also feeds on ponderosa pine and Douglas fir. The Blue River in Colorado is beautiful in every season, whether it’s a torrent of snowmelt in spring or a sparkling stream come fall. So, when Brad and Mary Heinrich came across a cabin for sale on its riverbank, they knew it was the perfect place.

For years, the Denver couple longed for a rustic hideaway in the Rockies. “I told myself, one of these days I’m going to have a cabin in the high country,” recalls Brad. “I used my cabin dream as motivation to work harder, longer and smarter."
A suitable site or existing structure wasn’t easy to find, though. Either the trees on available lots were dead, ravaged by mountain pine beetles, or the incline was too steep to build on. But luck was with the Heinrichs on Presidents’ Day weekend in 2009. The couple and their daughter, Camille, were staying at their ski condo in Silverthorne, Colo. About 60 miles west of Denver, Silverthorne is base camp for Breckenridge, Keystone, Copper Mountain and Arapahoe Basin ski resorts. Waiting in line for breakfast before hitting the slopes, Brad spotted an ad in the local paper. The listing was for a 30-acre spread just outside town.
While Mary and Camille toured the cabin, Brad strapped on snowshoes and explored the terrain. He was relieved to see cottonwoods and 75-foot spruce trees, and virtually no lodgepole pines (the beetle’s favorite target). Views were stellar. The Gore Range loomed in the west; to the east, the rolling Williams Fork Mountains beckoned. The Tenmile Range and Mount Baldy and Mount Guyot rose southward.
But best of all, the Blue River raced alongside the property. Built in 1985, the cabin is approximately 90 feet from the river, a stone’s throw away. (“I don’t think you can build that close anymore,” notes Brad.) The river frontage is about 1,200 feet. 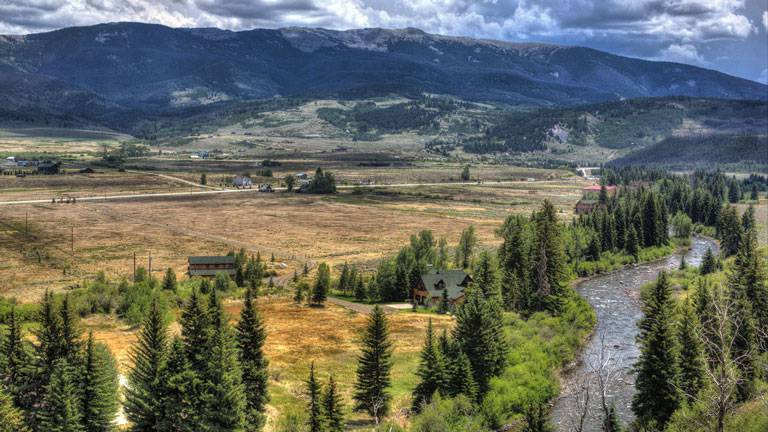 But the cabin was not quite an exact match for a mountain lodge. Oh, the log-sided exterior was rustic enough. But the interior was bland and dated. Still, it had potential. The Heinrichs closed on the deal in May and planned to remodel at some point in the future.
A more immediate concern was the size of the living room. Both Brad and Mary hail from large families in Kansas, and love to entertain. That fall, they decided to add on in time for a Christmas clan gathering. Brad pictured a great room worthy of the setting, with a vaulted ceiling and a two-story fireplace. Jeff Cline, owner of Cline Design Group in the Denver area, took on the project.
“We started the design by trying to decide the best location for an addition,” says Cline. He wanted the 700-square-foot addition to complement, not overpower, the 3,100-square-foot cabin. So rather than add on to the front, he placed it off the dining room.
As part of Cline’s commitment to green building, materials and subcontractors were sourced locally when possible. The addition’s beetle-kill pine exterior siding is the same as the original siding; both are from Hester’s Log and Lumber in nearby Kremmling. Pine and aspen are from local lumberyards. Tim Bicknell of Bikbilt Masonry Co. in Silverthorne built a fireplace, and a rock wall between the living and dining rooms. Colorado Rails & Custom Woodwork of Denver assembled the huge Douglas fir beams and trusses on site, and installed the tongue-and-groove aspen ceiling.
That December, the Heinrichs celebrated not only their first Christmas at “Mountain Meadows,” as they now call it, but also Camille’s September engagement. Brad and Mary anticipated a big wedding reception at a Denver hotel the following Labor Day, 2010. Instead, Camille asked for an intimate celebration at the cabin. (Click here to read more.)
So, no sooner had the dust from the addition settled than another whirlwind began. Compared to the great room, the living room looked out of place. (You could stand in one and look across the dining room into the other.) The first-floor master and two upstairs bedrooms also needed sprucing up. The Heinrichs had less than a year before the wedding to match old with new. Jeff Cline came to the rescue, spearheading the remodel. Actually, “extreme makeover” is more like it. Other than flooring, windows and the kitchen – recently remodeled by the previous owner – everything was replaced. 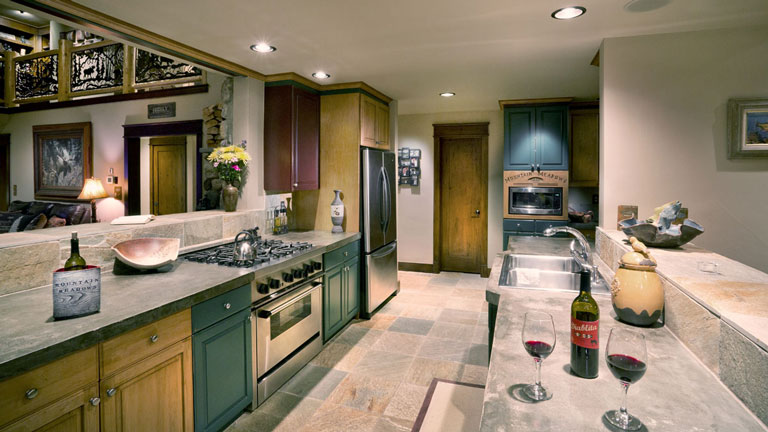 The Heinrichs were so impressed with Colorado Rails’ woodworking skills that they invited the crew back. The company added beams to the living room and all three bedrooms. They also installed leftover tongue-and-groove aspen in the stairwell and on the bedroom ceilings. All existing oak doors, baseboards and trim were replaced with knotty alder. “The golden oak throughout the cabin gave a contemporary rather than a rustic feel,” says master carpenter and Colorado Rails co-owner Curtis Shewfelt.
Denver painting contractor A.J. Simpson distressed the alder for a rustic, aged look. Mimicking natural cracks and splits along the grain, Simpson carved the wood with a sharpened gouge. Faux wormholes were created in the wood with deck screws with ground-off end threads. The screws protruded from a homemade wood paddle that Simpson used.
Next, dye-based stain was applied, followed by a top coat of glaze. “Alder lends itself to a number of finishes because it has graining similar to cherry,” notes Simpson. “You want a rich color underneath, so when you cover with glaze, the graining shows through.” For do-it-yourselfers: Simpson recommends Sherwin-Williams wood grain oil stain.
The “orange peel” wall finish – popular during the 1980s – also had to go. After scraping it off, the walls were retextured with skip trowel texture (“skipping” a trowel randomly across wet joint compound) and painted. 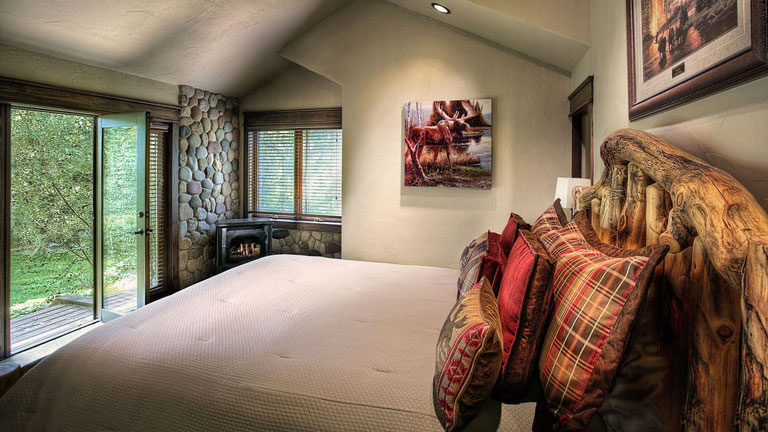 Since the Heinrichs planned to be at the cabin often, they wanted it to be as energy-efficient as possible. The existing cabin had only electric baseboard heat. A new propane forced-air system keeps the cabin cozy now. A heat recovery ventilator preheats cold air from the outside before it hits the furnace. (Not only does the ventilator let the furnace work half as hard, it also filters the air.) Walls and ceiling are now well-insulated with closed-cell spray foam.
Metal wildlife panels and beetle-kill pine posts replace the original drywall stair and landing railing. The Heinrichs admired Denver artist Ben Stielow’s work at shows, and commissioned him to depict cabin settings in steel. Mountains, trees and local wildlife bring the outside in. Moose, black bear, elk, geese, ducks, rabbits – even the resident bald eagles – are part of the panorama. (All have been spotted on or near the property – some, like the bear that slipped past Mary while she was gardening, too close for comfort.)
Brad is particularly fond of the fly-fisherman on one panel. Since buying the cabin, he’s gotten hooked on the sport. “Being out in the river is so serene,” he says. “You’re reading the water, the wind, the bugs.”
New stone steps lead down the bank, making it easy for guests to reach the river. Trout, the couple’s 3-year-old black Labrador retriever, and Bailey, their 2-year-old yellow Lab, like to jump right in the water and swim. (The river never totally freezes, but the temperature hovers around 40°F year-round.) “They’re the only two beings that love it here more than us,” laughs Brad.
The Heinrichs spend more than one-third of the year at the cabin. And no wonder, with year-round recreational opportunities at their doorstep, it’s hard to leave. Silverthorne is in the middle of Summit County, aptly nicknamed “Colorado’s Playground.” In winter, if this outdoorsy family is not skiing or snowboarding, they can be found snowshoeing or snowmobiling on their property. With acres of national forest and wilderness areas to explore, Summit is just as much fun when the snow melts. The Blue River is a mecca for whitewater rafting in spring. In June, hiking, biking and golf lure the Heinrichs away from the river. Whatever the adventure, there’s always a crowd in tow.
“We have a cabinful during all the holidays,” exclaims Brad. “It’s like a revolving door.” Their newlywed daughter brings friends, as does their 23-year-old son, Brandon. After a day’s outing, the gang spills onto the new, enlarged deck. Even in zero-degree weather, folks gather around the fire pit to swap tales of the day’s adventures. “Though it gets cold, everyone is sunny,” says Brad. 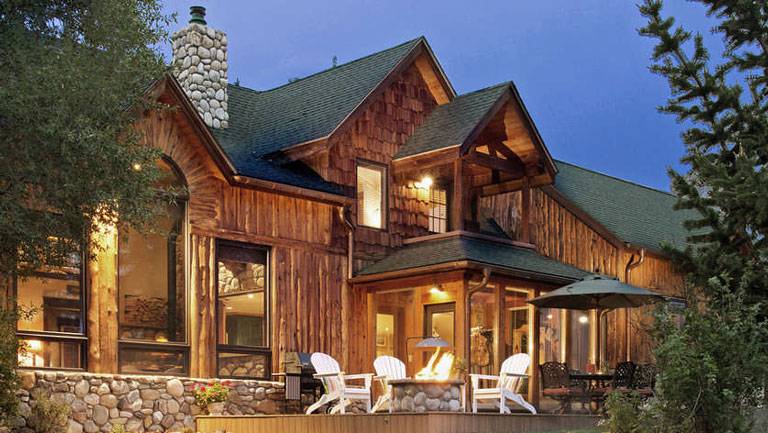