Step Inside a Restored Kentucky Cabin

Step Inside a Restored Kentucky Cabin

The cabin this couple discovered had once been someone else’s dream that had never materialized. But with passion and hard work, they were able to bring this remnant of the past to life and create a place of living history. 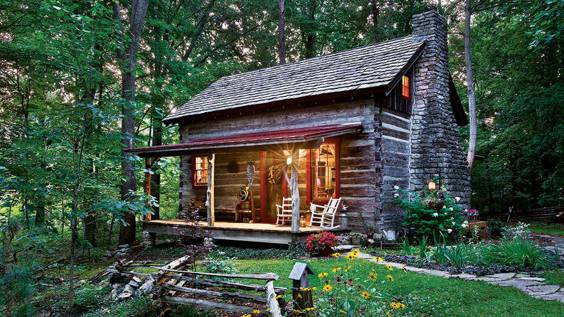 The vintage cabin, likely built in the 1800s, was overgrown with ivy when Jan Paul and Tammy Donelson discovered it. To restore the building, they tore ivy from the exterior and rebuilt the porch roof to make it more authentic to the period. The new porch features a standing-seam metal roof and new cedar posts cut from trees on the site. The landscaped path leads to the two-car garage and beyond that, to the main house

Logs hewn square make up the exterior walls of the cabin. Wide bands of chinking seal the gaps between the logs and give the cabin an authentic pioneer look.

The claw foot tub is original to the cabin and only needed some polishing to be ready for guests who come to the cabin to unwind. 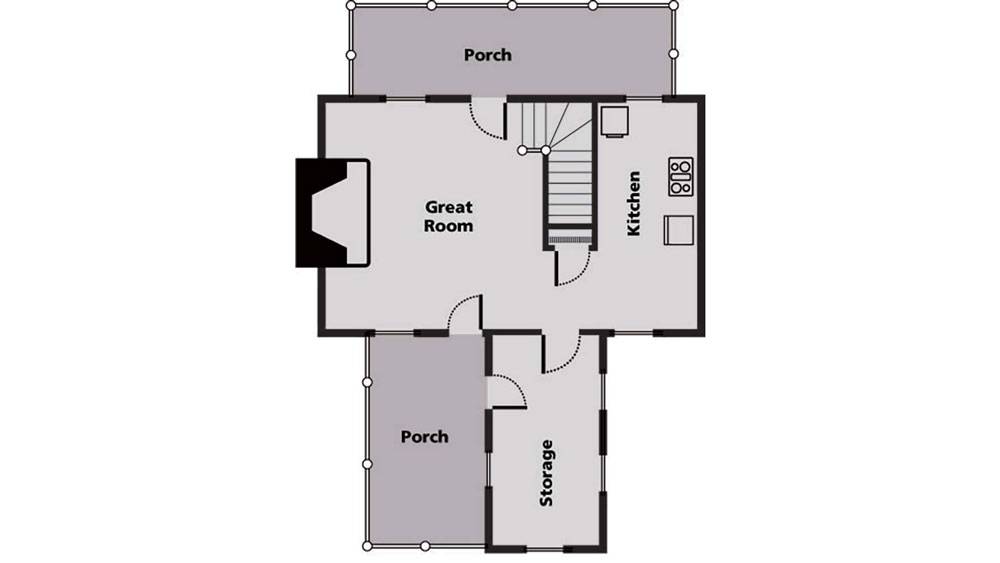 The vintage cabin, likely built in the 1800s, was overgrown with ivy when Jan Paul and Tammy Donelson discovered it. To restore the building, they tore ivy from the exterior and rebuilt the porch roof to make it more authentic to the period. The new porch features a standing-seam metal roof and new cedar posts cut from trees on the site. The landscaped path leads to the two-car garage and beyond that, to the main house

Photography by Roger Wade
Jan Paul Donelson first sighted this cozy cabin while house hunting in Louisville, Kentucky, with a real estate agent. Nestled in a wooded area on a 3-acre lake, the cabin was covered with English ivy.  “It was the first house we visited on the second day of searching,” he says. “We turned off an overgrown road, crossed a bridge over a creek and went up along a lake. I wondered where the Realtor was taking me.” When Jan Paul saw the vintage cabin, which he believes is about 175 years old, he said, “This is it. You don’t have to show me anything else.”
His wife Tammy, who was being relocated to Louisville for a new job as a consultant, arrived in town the following day. Jan Paul took her to the cabin. “She said, ‘This place feels like home.’” Jan Paul remembers. “It was a nice affirmation.”

The 17-by-26-foot cabin sits on 8 acres of property that also includes a main house and a separate two-car garage. The home’s previous owner had purchased the cabin in Indiana and relocated it to the property in the mid-1970s. “All the bones were good, but it was dirty and in disrepair and needed a good roof,” Jan Paul says. “The previous owner never actually lived in the cabin.”
Restoring the cabin to the life it might have had in the 1800s “took about three months and was a labor of love,” says Jan Paul, a registered architect and distributor for Hearthstone, a supplier of log and timber homes. He and Tammy pulled the ivy from the exterior, put on a new shake roof, installed a new water line, HVAC system and heat pump.
Inside, they cleaned the floors and ceiling (both poplar) and tore down wallpaper. They painted some walls to lighten up dark spaces.
The front porch had “the wrong roof,” Jan Paul says. “It sloped incorrectly for the time period.” He installed a new standing-seam metal roof and lowered the pitch to where it would have been originally. He replaced the posts with ones made from cedar trees on the site. He also used the cedar to create a rail fence. While the couple lives in the main house, they spend as much time as possible in the cabin—when they’re not renting it out through AirBnB.
The cabin’s traditional construction has helped it stand the test of time, says Chris Wood, Hearthstone’s vice president of sales. Made of square hewn logs from large old-growth trees, the cabin has a stone foundation—keeping water away from the wood. The logs are set in a half dovetail on the corners, “so there’s no level spot for the water to rest. They dry quickly and hold up over time,” Wood says. The cabin’s thick, wood doors all have old iron hardware with locks and keys.
The master bedroom and bathroom are the only rooms on the second story. The first floor’s main attraction is the cozy living room with its limestone hearth. And the small kitchen, featuring original 2-inch wide, pegged plank floors and exposed ceiling joists and beams, rivals the design of any new home where rustic farmhouse meets contemporary sensibilities. Cabinet maker David TVintage, Medium, Restoration, Cozy, Antique. Smith, owner of The Workshops of David T. Smith, built open shelves, curly maple Shaker upper cabinets and furniture-style cabinetry to cover the refrigerator and dishwasher. There’s a farmhouse sink and period faucet.

Learning From the Past

Maintaining the cabin’s 19th-century charm was the easy part for the Donelsons, who are Lewis and Clark period re-enactors. Jan Paul often plays Captain Meriwether Lewis with a group called the Discovery Expedition of St. Charles. The Donelsons brought their furniture from their previous home in St. Louis to the cabin. “It seems like everything we had prior to moving here fits, as if we’d been collecting things all those years just to put it in this cabin,” Jan Paul says. In the living room, he displays a replica of Lewis’s captain’s uniform, which he wears during re-enactments. There’s also a hand-carved paddle he uses on the Missouri and Columbia Rivers and a feather quill used for journal writing during the re-enactments. “Each item has a story of its own and a memory to go with it,” Jan Paul says. The items look perfectly at home in the cabin.
The Donelsons are passionate about their cabin and about its importance as a living piece of history. “This place whispers to me every day, of where we have come from,” Jan Paul says. “Not everyone who crosses our threshold feels the connection, but for those who appreciate the sense of place, time and heritage our forefathers gave us, they find the cabin a comfort. They feel that warm embrace of romance from our heritage.”