A Montana couple settles into their retirement cabin in the foothills of the Rockies. 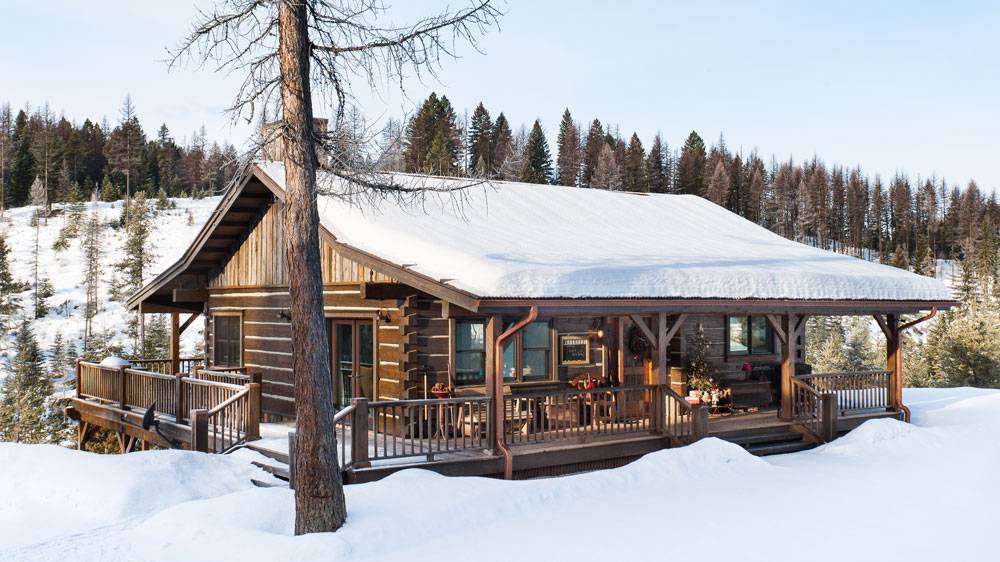 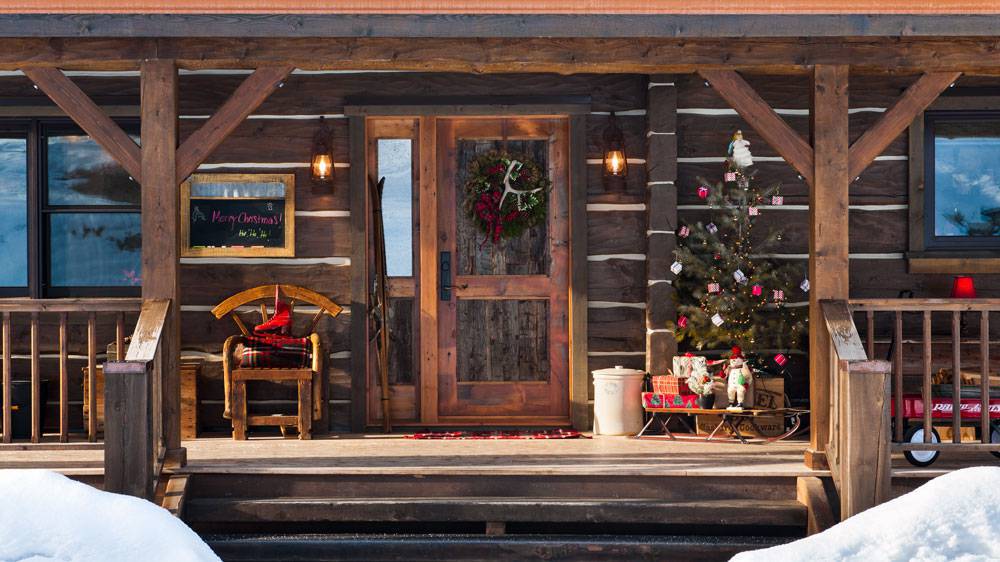 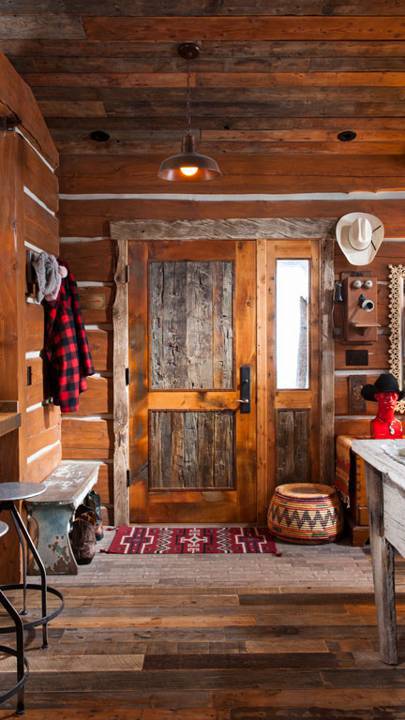 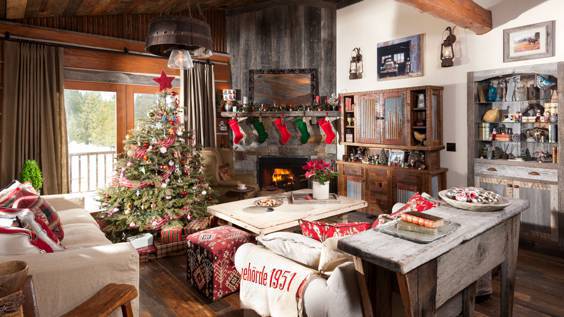 WESTERN FLAIR – Ted and Linda chose furnishings and finishes that spoke to their laid-back western lifestyle. Cabinet maker Greg Febbo made the hutch on the right. 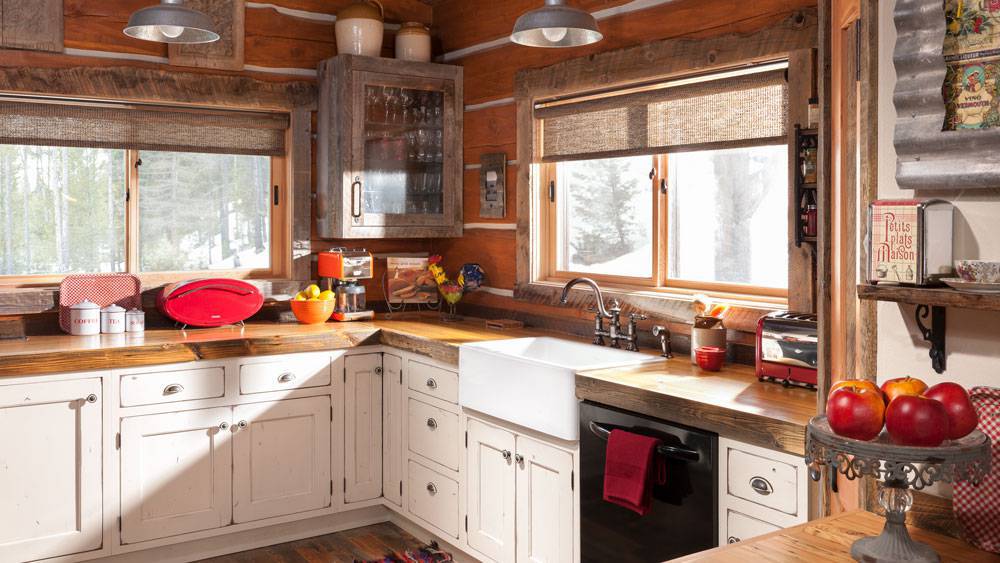 The metal on the front of the kitchen counter was salvaged from an old barn. The pendant lights were bought from LaSalle Lighting, in Kalispell, Mont.

The stools were a gift from a friend who sells vintage goods at Station 8 Antiques, a local vintage store. 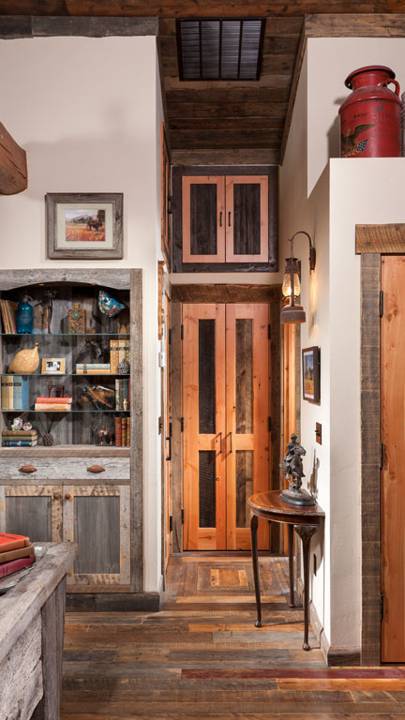 A neighbor made the dining set pictured here. The dress on the mannequin was worn by Linda’s grandmother when she immigrated from Canada to New Zealand in 1920. The Civil War-period hutch is one of Ted’s antique store finds. The ladder leads to a sleeping nook above the kitchen. 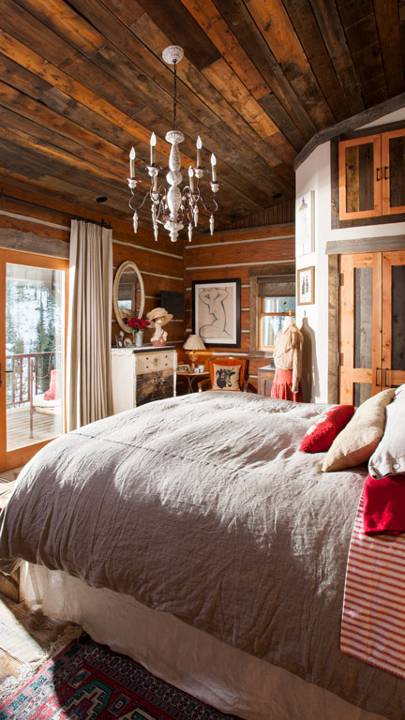 This is the master bedroom. To the right is a walk-in closet. Above it is bonus storage space for seasonal items. The French doors open to a west-facing porch that has a sofa, two chairs and a dining table. It’s the perfect spot to enjoy a Montana sunset with a glass of wine. The master bathroom is separated from the bedroom by a barn door. The bathroom includes a fireplace, shower (left foreground) and tub. The wall-mounted sink is a Kohler Brockway. 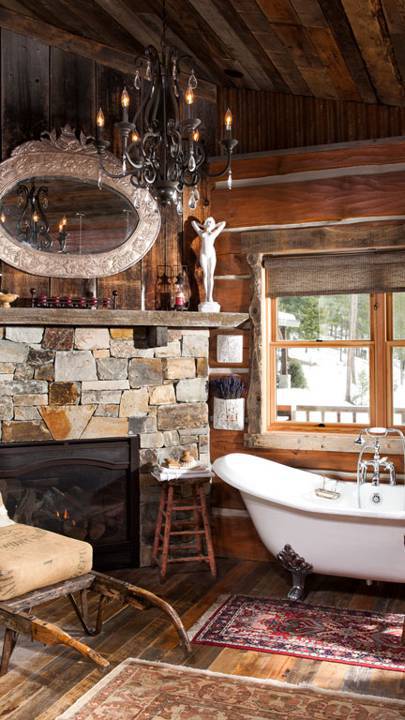 The sofa and chair here once belonged to Rudy Vallée, an entertainer whose recording career spanned 1921–1973. 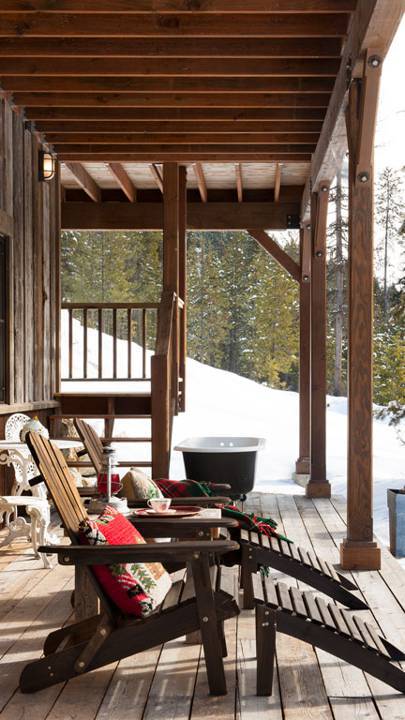 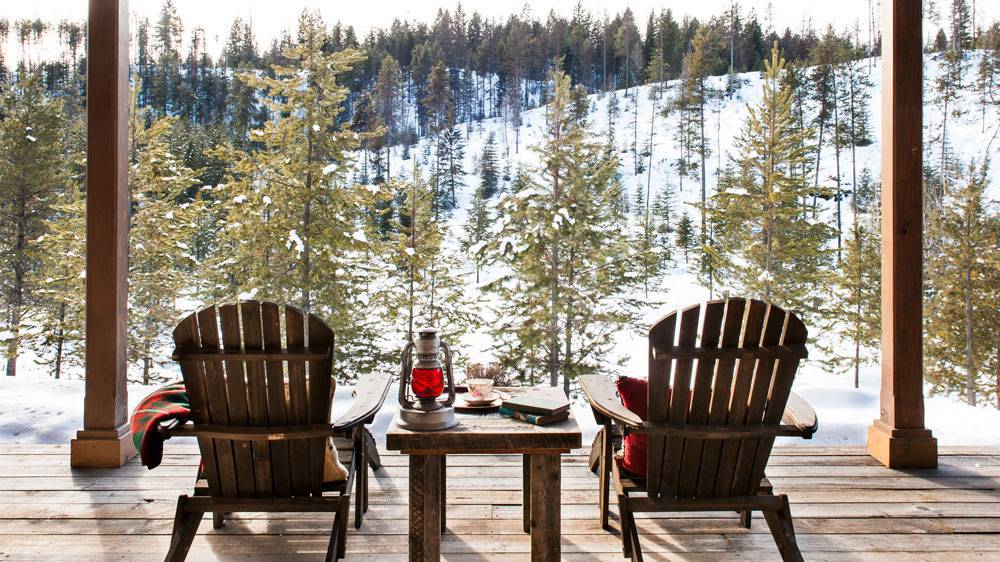 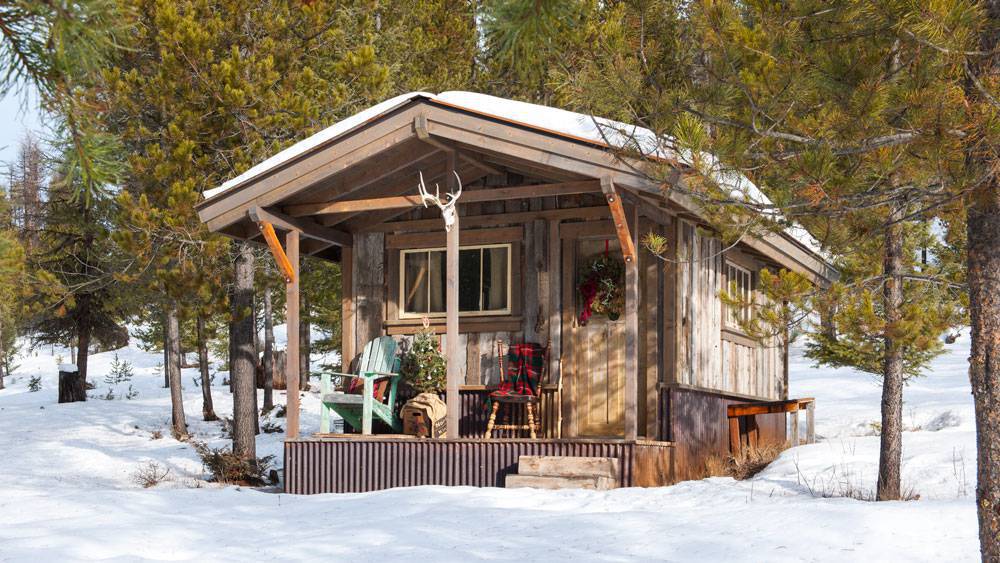 The one-room trapper’s-style cabin on the property is a quiet place where Ted goes when he wants to read or just get away for some quiet time. The cabin, built by Linda’s brother Tony, was a Christmas surprise from her to Ted. 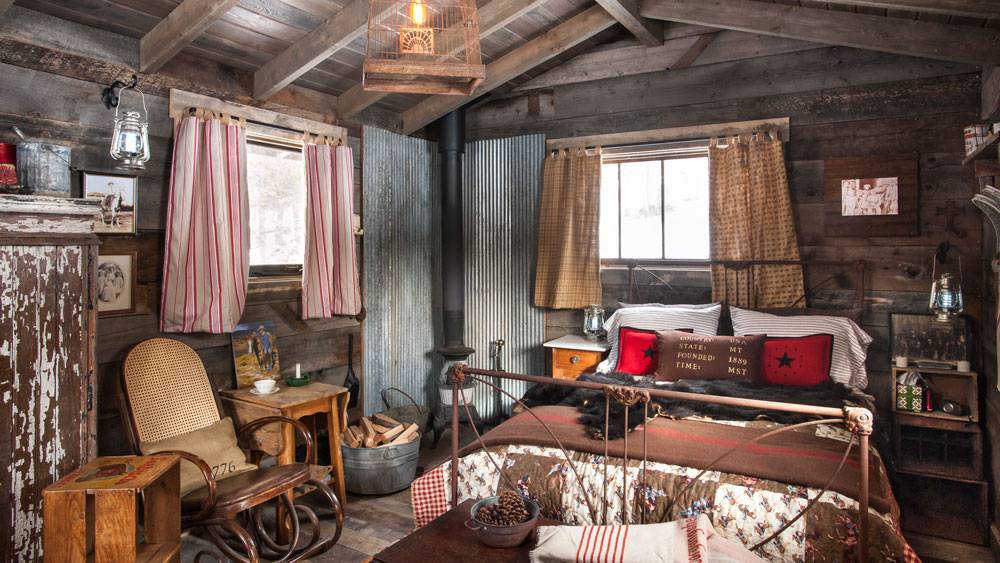 This is the interior of the one-room cabin on Ted and Linda’s property. It’s modeled after a trapper’s cabin. 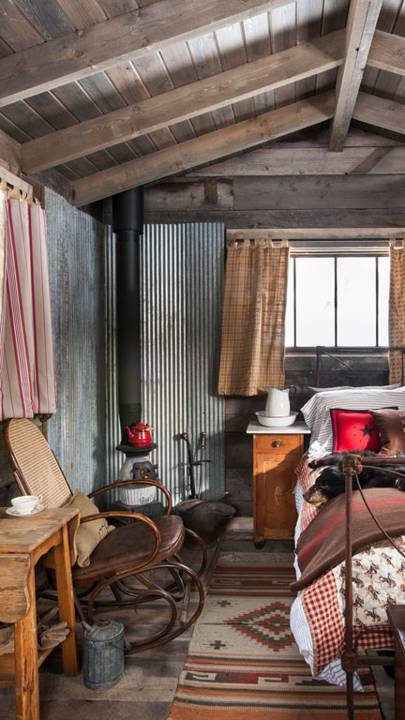 Written by Christy Heitger-Ewing
Photography by Heidi Long
As a young boy growing up in Boulder, Colo., Ted Valentiner aspired to one day own a little log cabin in the woods.
“I had a picture in my head of what it would look like,” says Ted. “I even carried around a tattered photograph in my wallet of my dream cabin.”
Fast-forward several decades to 2012 when Ted and his wife, Linda Shannon-Valentiner, purchased a piece of lake property in Whitefish, Mont., near Glacier National Park. They fell in love with the area because it offered an extensive network of trails on which they could ride their horses, Buzz and Whiskey Pete. In addition, the lake offered trout fishingfor Ted and was close to lots of vintage fairs – a passion of Linda’s.
Nestled in the foothills of the Rockies, this property had it all.

Construction commenced on Ted and Linda’s year-round retreat in June 2012. During much of the construction period, Ted was working overseas, so Linda took daily pictures to show the progress. She purposely neglected to photograph one piece of the project, however. Linda had asked her brother Tony to build a special Christmas surprise for her husband: a one-room cabin located down the hill 100 yards from the main cabin.
When Linda first took Ted to see his surprise, it was like a scene from a movie. Snow fell from the night sky at a fierce clip as the couple maneuvered their car through blowing snow drifts. Then, Ted laid eyes on his trapper’s cabin, and he was awestruck. “It was lit up and looked exactly like the photo I’d been carrying for years,” recalls Ted. “I couldn’t believe how perfectly Linda had captured my vision.” 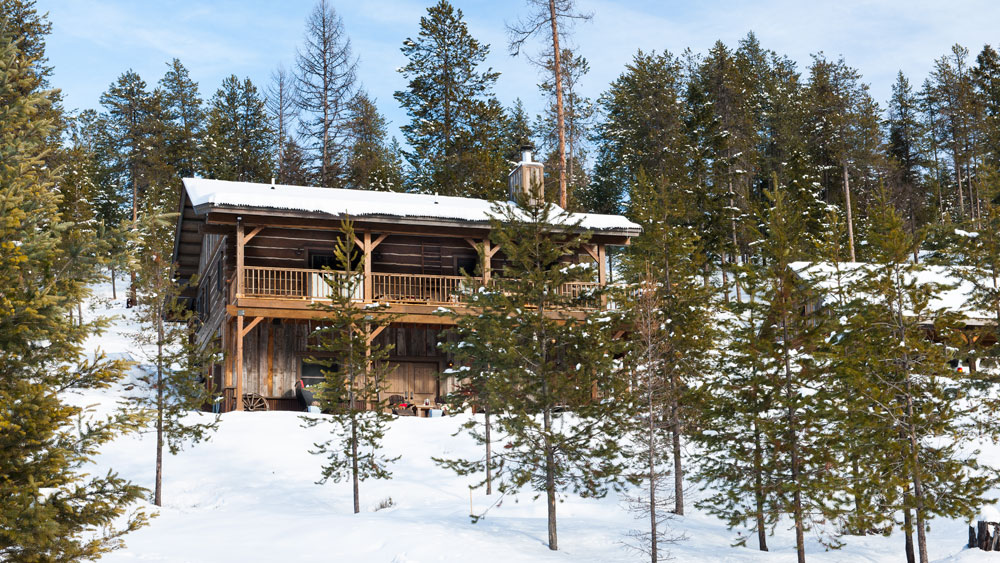 A Home Made of History

When they met their draftsman, Eric Bachofner of Kalispell Montana Log Homes, the first thing Ted and Linda told him was that they wanted their new cabin to look old. Therefore, they chose a style of construction that features square timbers with handcrafted dovetail joinery at the corners of the home.


“The handhewn flat logs created that old-timey look,” says Linda.
A highlight of the construction process was watching their cabin arrive on a flatbed truck. Kalispell Montana Log Homes erected the structure in a single day. “We sat in lawn chairs on the mountainside and watched them stack the logs like Lincoln Logs,” says Ted.
Since the couple was interested in preserving the historical integrity of Montana’s structures, Linda chose reclaimed lumber that had a rich history. For instance, the planks in the two-toned front door came from a 100-year-old Montana schoolhouse. The thick butcher-block kitchen counter was once part of a 1940s General Mills grain elevator, also in Montana.
Linda also selected the faucets, fixtures, windows and plumbing. “Putting it all together is my passion,” she explains. 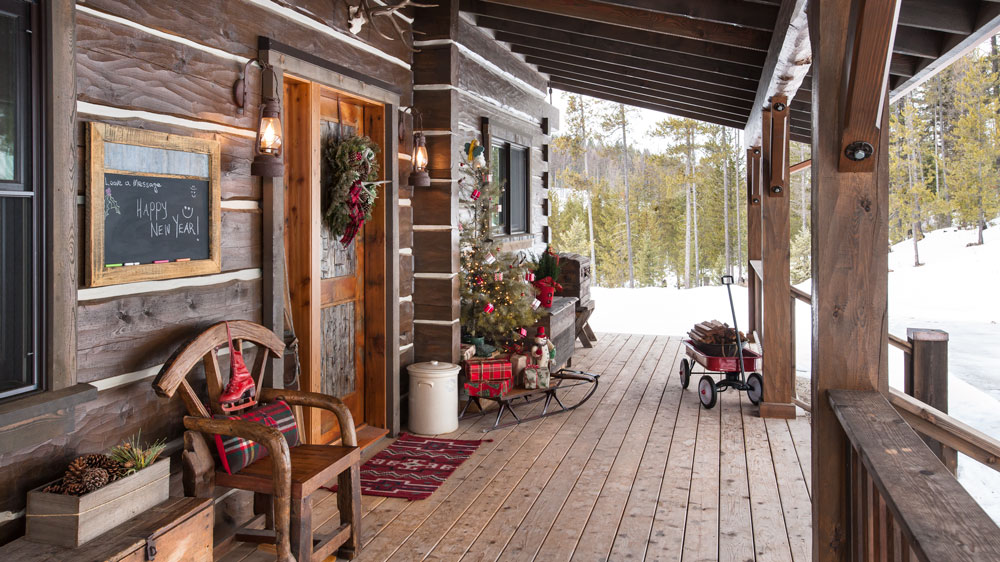 The 2,160-square-foot cabin is comprised of two bedrooms and three bathrooms. The main floor (1,080 sq. ft.) houses the master suite with a walk-in closet and French doors that open to a porch. The suite has a generous bathroom that has a fireplace, claw-foot tub, 4-foot long wall-mounted sink, and glass shower with a pebble floor and wall tile that resembles reclaimed barn wood.
Above the kitchen is a sleeping nook that’s accessible by ladder. The area was originally designed to be closed off and used for storage, but Linda wanted to optimize sleeping quarters. “Once we have grandchildren, that extra bed will come in handy,” says Linda. “Right now, the odd nap gets taken up there.”
The original design didn’t call for a walk-out basement. But, the Valentiners realized after excavation that because of the way the structure was positioned on the hillside, they could double their square footage and create a guest suite large enough for a bed, bath, office and kitchenette. “It’s designed like a studio/old-fashioned hotel room,” says Linda.

The garage also has a studio feel – with a sleeping area, workout room and fireplace – and acts as the couple’s “creation space.” Linda uses it as a sewing area and Ted makes leather goods like belts and saddles.
Because of the small footprint of the home, the couple wanted to use space very efficiently. Therefore, instead of closing off the upper walls with drywall, they asked their builder to create cupboards that reached to the ceiling. In addition, the owners made sure to utilize the space above closets and laundry to store seasonal items and unsightly electrical wires. 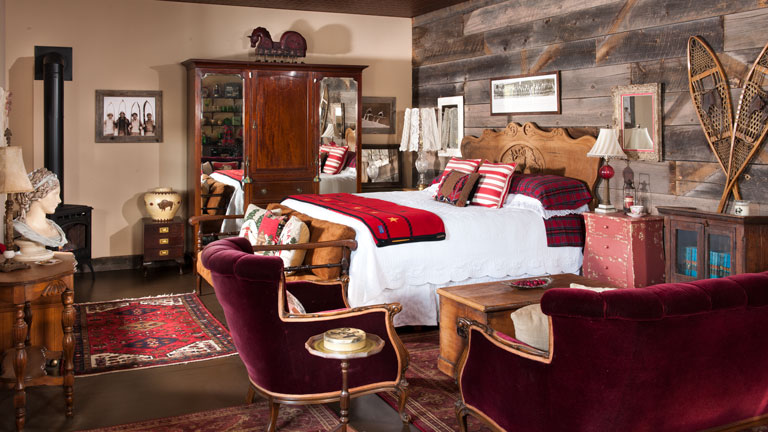 Because Linda is a repurposing mastermind, the cabin is bursting with vintage furnishings. In the master bathroom sits a chaise longue that she repurposed from an old handcart. She also turned an antique coffee grinder into the bottom part of a bedroom lamp.
The chandelier in the living room was made by neighbor Bobby Giles who fashioned it from an oak barrel topped by an old saw blade from a mill.
In a downstairs bedroom sit a sofa and velvet chair that once belonged to famous entertainer Rudy Vallée. “They’re in mint condition because Rudy put them in storage in the 1920s, where they remained until we purchased them,” says Ted.
Linda adores retro fashion décor, so throughout the cabin she has positioned several head-and-torso mannequins. “Mixing the rustic French look with American West style is a passion of mine,” she says.

The cabin’s floors, ceilings and the top bit of the chimney breast (the area above the mantle) are made up of reclaimed barn wood. The bottom portion of the chimney is made from local stone. “These buildings all have a heritage, and we wanted to preserve, honor and maintain that heritage,” says Ted.
The cabin’s furnishings integrate the look of yesteryear. For instance, colorful rustic peanut tins, old gas cans, silver tea sets and dusty books from their grandparents’ generation decorate the cabin. 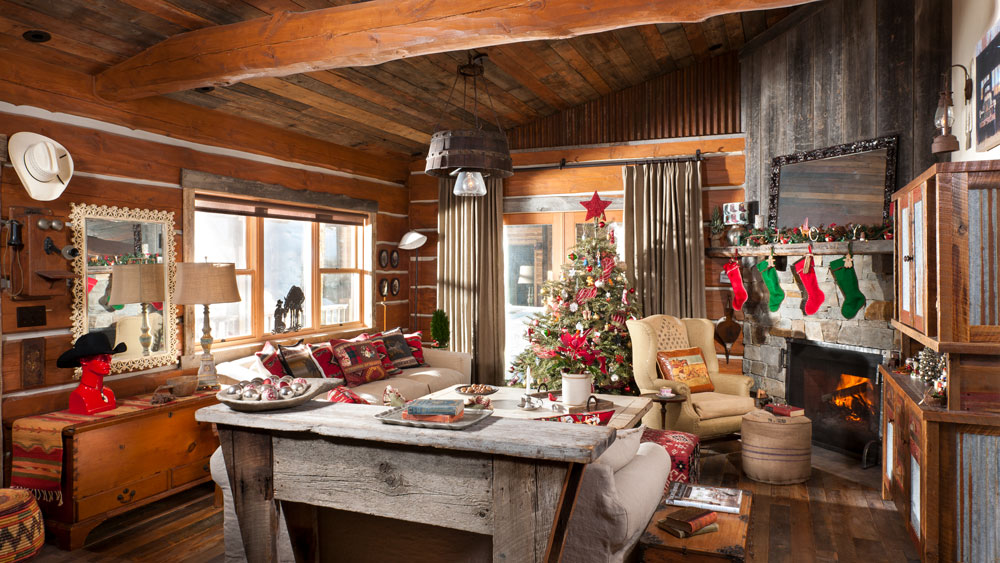 When it comes to fun at the cabin, options abound.  “We can’t wait to get involved with whatever comes our way," says Linda. "There’s no shortage of choices.”

Those options include fishing, horseback riding, canoeing, snowshoeing and Nordic skiing. “We live next to a Nordic Center with a beautiful trail that goes around the lake,” says Linda. “It’s quite a workout!”
Linda and Ted enjoy hosting luncheons, dinners and holiday celebrations for friends, neighbors and family. Gatherings will no doubt increase now that they are settled in. Settled in and living the dream.