Looking back on it, the Haberlachs realize they had no idea what they were getting into when they took on this large log summer home that's listed on the National Register of Historic Places and located just miles from downtown Portland, Ore., 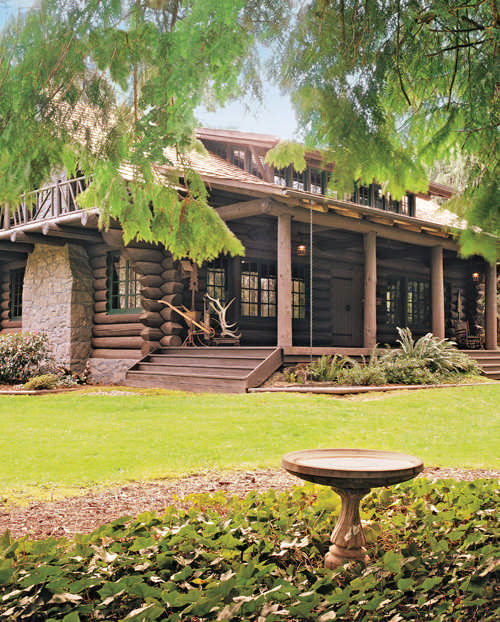 Story by Jana Voelke Studelska
Photos by Roger Wade
Looking back on it, the Haberlachs realize they had no idea what they were getting into when they took on this large log summer home that's listed on the National Register of Historic Places and located just miles from downtown Portland, Oregon. “We’re used to it now,” laughs LaVonne Haberlach, who bought the home with her husband Larry. “But in the beginning it was pretty overwhelming. We’re really proud of the way the house looks. We’ve worked hard.”
The massive front porch is supported by log columns and was completely rebuilt by the Haberlachs. Over the years, the large overhang of the roof and balconies have protected the home’s logs from Oregon’s rainy weather.
Built over three years between 1912 and 1915, the 3,600-square-foot log house was originally the summer retreat of Maria and Sam Jackson. Sam Jackson became owner and publisher of the Oregon Journal newspaper in 1902, and went on to be an influential, powerful public figure in Oregon politics. Adirondack comes to Oregon The summer home was named Alder Lea and was designed by Maria, who is said to have patterned it after a house she’d visited in Sweden. The design also was influenced by Maria and Sam’s visits to the East Coast, where they enjoyed summers at some of their friends’ great camps in New York’s Adirondacks. The Jacksons brought two Scandinavian craftsmen from Europe in 1912 to oversee the construction of their summer home, and local men were hired to fell the property’s Douglas fir to build the house. Even more logs were brought down from nearby Mount Hood. The superior work and detailing shine through nearly a century later. “This house is pure Scandinavian craftsmanship,” says Larry Haberlach, an IT manager for a national retail corporation. “It was probably one of the only West Coast log homes built with Adirondack style at that time”. 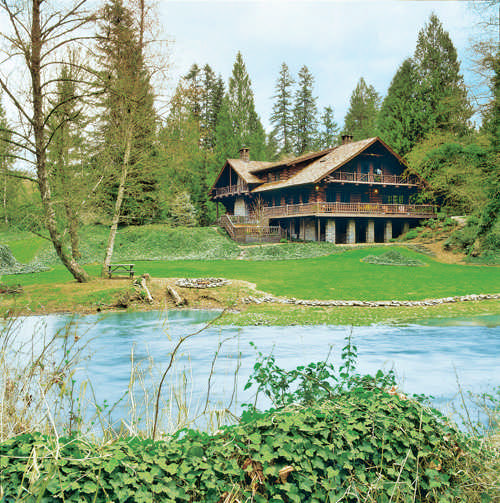 LaVonne and Larry Haberlach have lovingly restored their historic Oregon home, built in the Adirondack style by Scandinavian craftsmen in the early 1900s. Two rear decks look out over the terraced yard and Clear Creek, a rocky stream that horseshoes around the house. The 6-acre property is heavily wooded with alder, fir, cedar and yew trees.
Throughout the house, railings, stairs and columns are fashioned from logs and tree limbs. “There’s no center beam in the cathedral living room,” says Larry. “Instead there are criss-crossed trusses that hold up the roof by pressure. On the ceiling are three-foot long cedar shakes that originally were both the ceiling and the roof.” Falling in love How LaVonne and Larry Haberlach ended up with the house is an interesting story. On separate occasions, both were guests at the house while in high school. Even then, each was struck more by the ambiance of the surroundings than by the house. Later, after LaVonne and Larry met and married, they lived nearby and often would catch a glimpse of the place from a hillside road that led from their neighborhood. Larry found out from a friend that the house was going on the market and before long, he and LaVonne were the owners. “The log house and everything was interesting, but we were more intrigued by the land,” Larry says, explaining that the property, once a remote 40 acres, was down to six acres and surrounded by urban Portland by the time they bought it. 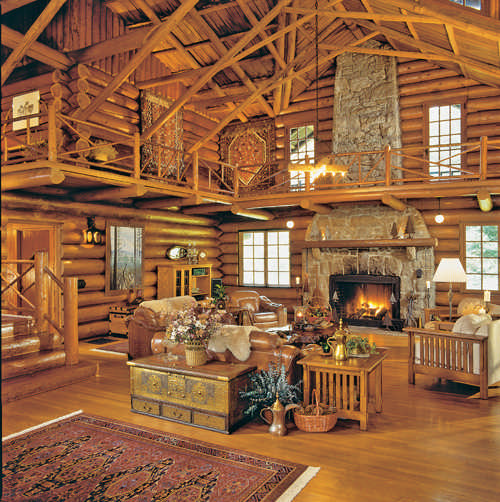 The living room in Alder Lea is the centerpiece of the home, with its 22-foot ceiling and interior balconies.
“When you have a house that’s really old and needs this much attention, it takes some getting used to. The house is big, as are the grounds, and everything takes longer. Some people buy a few bags of wood chips. We bring in several dump-truck loads.” LaVonne and Larry are “accidental conservationists.” Before buying this place, they had picked up a little fixer-upper cabin on Mount Hood. Over a period of eight years, they repaired and restored the cabin built by the federal government’s CCC program during the Depression. “That was our ‘trainer’ cabin,” says Larry. They still have that cabin, and they use it to get away from their renovation project. Full-time job One of the first projects they took on after buying Alder Lea was the logs. “When we bought it, the outside hadn’t been stained in 17 years,” said Larry. “The first time we stained it, it took 57 gallons using a sprayer. We didn’t know what we were doing, and it took most of the summer.” A few years later, LaVonne went back and did it with a brush. That time it only took 26 gallons. “With an old building like this, it’s live and learn.” 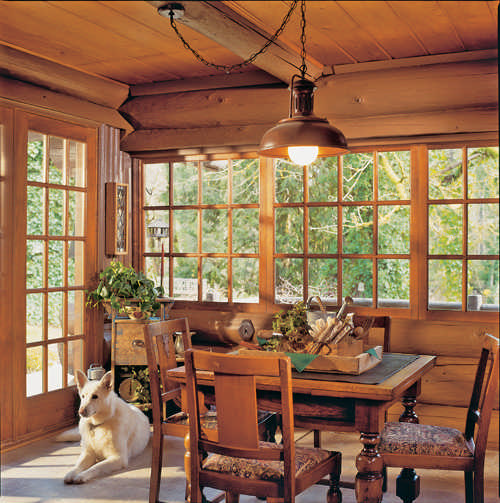 Part of the renovation involved replacing fixed-plate windows with handmade paned windows.
Over the years, they also have restored the rock foundation, replaced and redesigned the driveway, restored the bathrooms, renovated the kitchen, replaced fixed-plate windows with handmade paned windows, rebuilt the covered porch using the same design and many of the same logs, expanded the gardens and are now finishing a complete renovation of the carriage house. Most of the work they do themselves, only occasionally hiring out professionals. A landmark home Working with staff at the National Register of Historic Places has been a pleasant experience for the Haberlachs. “The Registry people have been so helpful,” says LaVonne, who works full-time on the house. “We can’t just go to Home Depot and buy a log. They’ve been very positive, and they realize the [historic] significance of the house as well as the enormity of the projects. “I look back and just laugh. The first year we owned this, the Historic Register people came out and I listed all the things we were going to do the first year,” LaVonne explains. “We just had no idea that it was far more than we could accomplish in one year!” 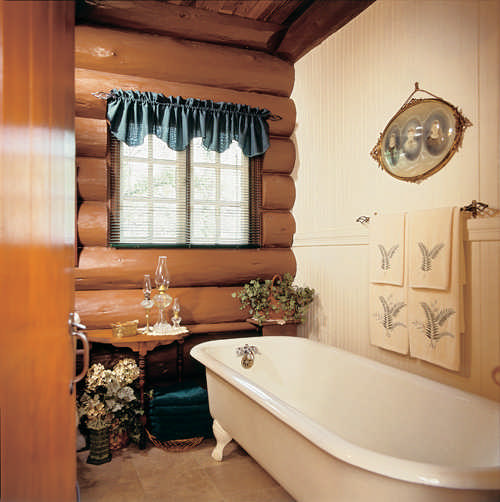 What does it mean to be listed in the National Register of Historic Places?

Listing in the National Register honors a historic place by recognizing its importance to its community, state or the nation. Under federal law, owners of private property listed in the National Register are free to maintain, manage or dispose of their property as they choose provided that no federal license, permit or funding is involved. Owners have no obligation to open their properties to the public, to restore them or even to maintain them, if they choose not to do so. States and localities may have laws to encourage the preservation of their historic places. Some provide limited financial assistance to owners in the form of grants, loans or tax benefits. Programs differ from state to state, and within states. If you have a historic property that you wish to restore or renovate... Most federal and state government organizations (and many local historic districts) have adopted the Secretary of the Interior's Standards for Rehabilitation developed by Technical Preservation Services. These standards are a series of concepts about maintaining, repairing and replacing historic materials (ranging from historic masonry and window repairing to conserving energy in historic buildings), as well as designing new additions or making alterations. Owners are not bound by these guidelines unless government funding or tax breaks are involved. Technical Preservation Services provides guidance for the care of historic buildings through pamphlets, books, videos and its website. For more information and for a list of topics, click here. To research the history of your property: When researching a property, both primary (original and archival) and secondary sources should be used. Sources may include title searches, architectural or construction drawings, building permits, cemetery records, community/county histories, court documents, family/personal papers, insurance records, land records, oral histories, tax records and old maps. For a complete guide on researching a historic property, click here. Jana Voelke Studelska is looking forward to taking the Haberlachs up on their invitation for coffee next time she’s in their neighborhood.
★