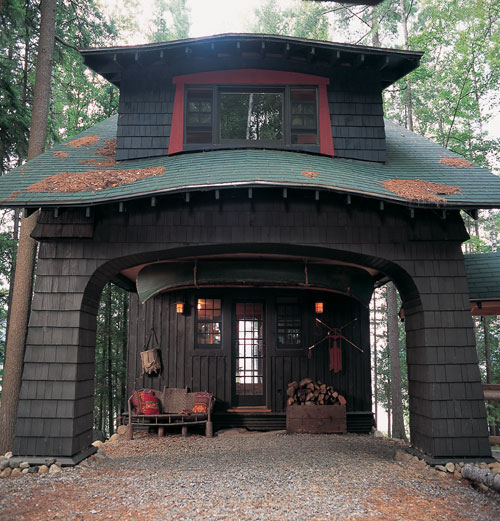 Welcome to camp This is the entry to Camp Birch Point, a multiple-building home, or compound, in the Adirondack Mountains of New York. The entry reveals Adirondack traditions: deep brown backgrounds, rustic antiques, and building/décor materials from the local area – like the amusing and unexpected fish scale application of birch bark ceiling shingles. Old style Striving for “old camp” in the great room, the team specified materials that would have been used a century ago: Douglas fir vertical grain siding, pine flooring, tin ceilings. The architect is a modernist at heart and introduced a Rama, which is a Japanese element known as a frieze in the West. The twig banding runs the perimeter of the room above the door frames and divides the vertical space, controlling the scale and humanizing proportion in a room of this size. The home is filled with treasures amassed before the house was conceived. The coffee table is a 9-foot antique bobsled, lamps were fashioned from old stills, andirons are circa 1915 from Big Wolf Lake – all set amidst Old Hickory furniture. Twiggy bedroom The architect took advantage of the site when positioning the master bedroom. The room has windows on all four walls and reaps the benefit of sunlight throughout the day. The architect is a devotee of the built-in; the bed/storage unit he designed hugs the floor and leaves the impression of a captain’s quarters on a ship. The twig cobwebs woven between two trees are a nod to the more conventional definition of rustic. The bark and twig work throughout was executed by local craftsman Bill Beatrice. Beyond this stand of trees, in a sunken area, is the owner’s office. Architect: Nils Edward Luderowski, AIA Builder: Redwing Construction, Dan Nardiello The following article is excerpted from a new book, “Rustic Revisited,” which features 30 exceptional homes – some old, some new – across the United States. “There are no typical rustic homes,” writes Ann Stillman O’Leary, the book’s author and a noted interior designer who specializes in rustic style. The homes she highlights vary greatly, but all are defined by the rustic elements of nature: “The building materials are used unrefined and are taken from the site itself ... Inherently, the shapes are lively, the details lighthearted, and the rules beg to be broken ...” 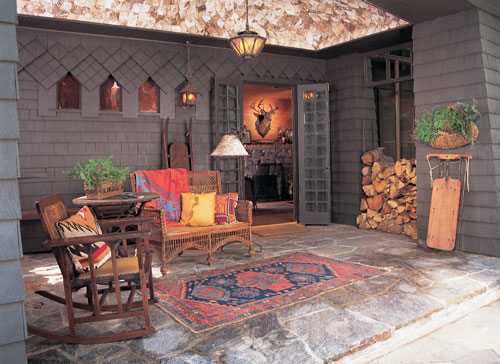 This is a story of metamorphosis: how an unprepossessing structure, in the form of a one-story shed, was transformed into an original and stunning camp compound. The property on Upper Saranac Lake in the Adirondack Mountains sits on a canoe carry road – a clearing used for boat portage. The owners purchased this land with its modest shelter in 1999 and set about finding an architect who could articulate their vision. A well-informed client is a dream for an architect, and these owners came armed with 600 photos of Craftsman and shingle-style homes and design features that appealed to them. Architect Nils Edward Luderowski distilled this information into a design that was representative of the rich culture of this lake. Rather than follow one particular design ethic, he fused multiple elements into a winning composition. In his words he “referred to all that had been done in rustic architecture from 1880 to 1940 and let it congeal in my head.” There are overtones of shingle style as well as allusions to the architecture of Japan and Norway, styles often referenced in Adirondack camps of that time period. 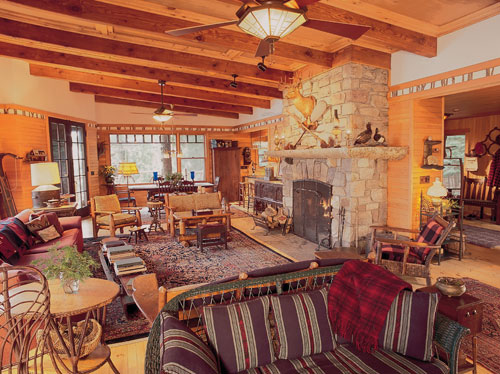 To test the merit of Luderowski’s design, the owners began by building “Catchall,” a garage/workshop/office. It was a simple structure with a prominent gable that became the “overcoat” for the building. From there they moved on to “May as Well” (If we put on the porch we may as well add the outdoor shower. And if …), and in short order Birch Point became a compound by happenstance. The porches could have been set square to the house but instead were turned and expressed as boat-like figures, a shape alien but harmonious to the gable and shed. A shower tower added at the last moment anchors the road side of the camp. The skirting detail is a signature of Luderowski’s, continuing the silhouette of the structure and grounding it; he likens the feature to cuffs on a pair of pants. Shingles were applied with caprice in a variety of sizes and shapes. The dictate was “throw in a paddle shake every now and then.” Three colors were used on the exterior: black, dark brown and green, with red used occasionally to tweak the scheme. The triad casts a spectrum of countless colors at any given time depending on light and shadow. The handsome interiors reflect the architect’s inclination for contemporary finishes and the owners’ Great Camp sensibility. Camps of the North Country are traditionally dark, so they kept the wood natural – oiled, not stained – and the furnishings provide the depth of color and texture needed to achieve an updated rustic look. 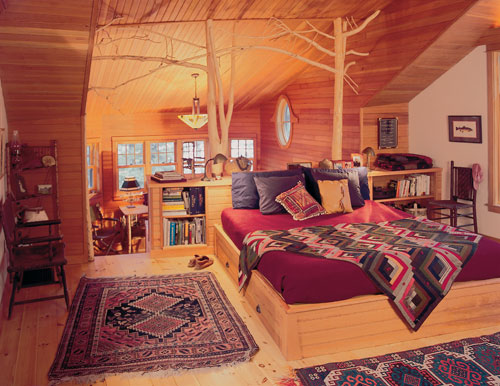 To test their architect's design concept, the owners of Birch Point began the project with this multiple-use building. Named "Catchall," this structure illustrates a Scandinavian influence in its eyebrow roofline and angled piers. Exaggerated contours on this simple structure lend a jocular personality.
★