The creative renovation of this all-season retreat is an example of stretching and reconfiguring space for maximum efficiency. 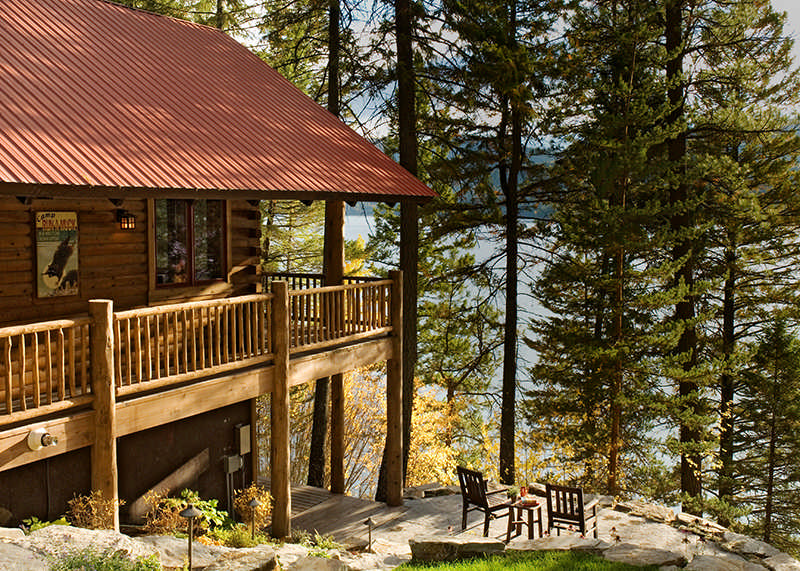 After several summers vacationing on Lake Tahoe, Kirstin and Mark, a California couple with two young children, decided they wanted a retreat of their own that offered similar year-round amenities. And they were willing to travel even farther away from their home in Laguna Beach, Calif. “We wanted a place in the mountains where we could ski in the winter and waterski in the summer, but there really aren’t that many places where you can do both,” says Kirstin. Then, a visit to Whitefish Lake in Montana made Kirstin and Mark realize that their concept of an ideal family getaway could be a reality. “It was the perfect summer/winter combination,” says Kirstin, noting the lake’s proximity to Whitefish Mountain Resort, a ski area. They also fell in love with Whitefish’s sophisticated art and restaurant scene. “We’d visited lots of towns, but this place really seemed to have it all,” adds Mark. Anxious to establish a Montana vacation routine, the duo immediately started tracking the real estate market from afar. When they happened upon a listing for an older cabin on the lake, a call to friends in the area confirmed it was a great location. Shortly thereafter, Kirstin and Mark were the proud owners of a ramshackle 1950s boathouse and a circa 1960 cabin that boasted carpet on the walls and peeling linoleum on the floors. It was basically unlivable. “It was sturdy and had good bones,” says Kirstin. “But we knew we had to gut it and start over.” 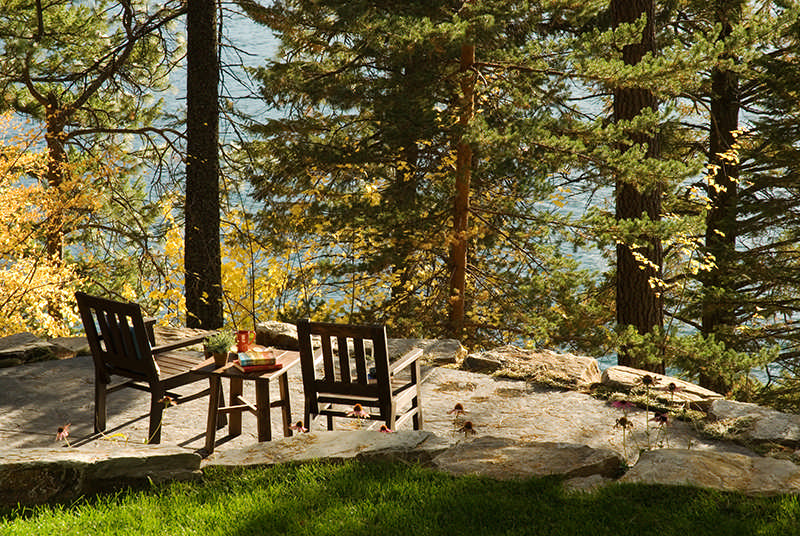 Reconfiguring the 1,100 square feet of the one-bedroom cabin to accommodate the family of four and a regular lineup of visitors required considerable planning. Enter architect Rich Graves of Altius Design Group. “The first thing we wanted to do was give them a mudroom so they’d have a place to kick off skis and snow boots before they entered the house,” he says. To make that happen, he enclosed a small porch. Next, Graves did some maneuvering – including removing a closet from the middle of the living room – so he could expand the main-floor bathroom to include a shower. “This way guests would have another option besides the bathroom on the lower level,” he says. And in the lower level, he added a bedroom. The new bedroom has a sliding door that looks out onto the lake (as does the other, existing bedroom). Meanwhile, project manager Wayne Saurey of Malmquist Construction tended to continuity issues like matching the new beams to the old ones and updating the electrical to accommodate a more contemporary array of lighting. “Anytime you put a new layout in an old building, there are challenges,” says Saurey, who painstakingly ran new wiring under the existing ceiling, added a layer of insulation, and built a new wood ceiling over it. “Rather than ripping out the original ceiling, we just created a new one that looks like it’s been there forever, which was actually the more efficient way to go.” To maximize the cabin’s square footage, the architect created banquette seating in the dining space and turned a small loft into a sleeping area outfitted with three extra-long twin beds, one with a trundle underneath. “We selected the longer beds to grow with the kids,” says Kirstin.


When it came time for decorating decisions, according to interior designer Heidi Tate, then with Hunter & Co. (and now owner of Tate Interiors), the homeowners were all about function and comfort but offered some pretty clear design directives as well. “They wanted it to be playful with a little Montana flavor, but not overly Western,” says Tate. “They also wanted everything to be bombproof.”  The designer answered the rustic request with tufted leather chairs and an ikat-topped sofa in the living room and an antler chandelier and knotty alder cabinet in the kitchen. Low-maintenance fir floors were selected because they hide marks from ski boots, and the slate floors in the bathrooms are basically “indestructible,” Kirstin says. “Both bathroom floors have radiant heat, which makes all the difference on a cold winter morning,” she says. 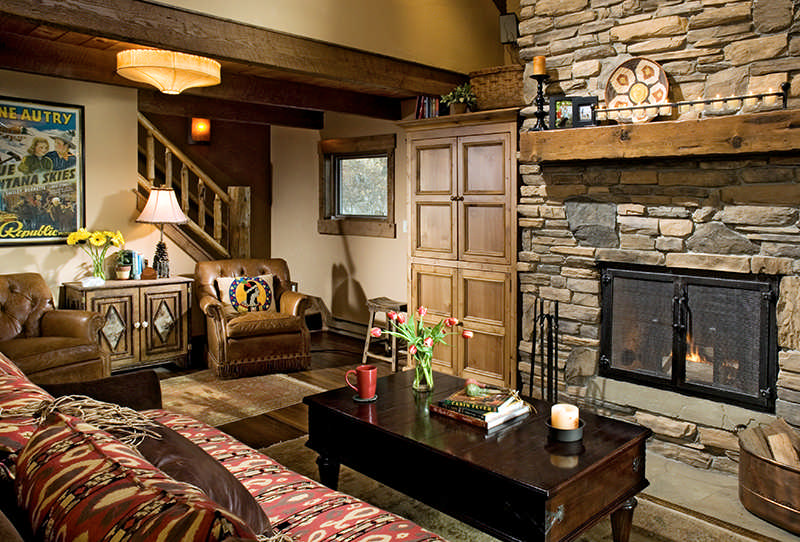 Similar ideals carried over to the boathouse transformation. Tate began by using multicolored reclaimed wood on the boathouse’s interior floors. “The original green paint with red markings in the reclaimed product inspired the overall color scheme,” she says. “We whitewashed the walls to make it brighter,” says Tate. She went on to cover the natural stained fir cabinets with a coat of turquoise paint, upholstered the log sofa with indoor/outdoor fabric in a bold red print, and selected impervious cork fabric for the bar stools. “It’s a totally user-friendly, stress-free environment that can stand up to wet bathing suits, dogs, spills – you name it,” Tate says. According to Kirstin, over time the boathouse emerged as her daughter’s domain. Sleeping bags stowed under the couch there accommodate instant slumber parties. “Even in winter, there can be a raging snowstorm and she just turns up the heater full blast and sleeps down there [by the lake],” she says. Crediting their incredibly hard-working crew, the owners say the cabin renovation was completed in 11 months – allowing them to meet their goal of spending Fourth of July on the lake.

That first year, Kirstin and Mark established traditions that would continue even as their children grew to high school and college age. “Now that the kids are older, we don’t come as often as we used to, but we never miss the Fourth,” says Mark, noting they still gather around the picnic table and fire pit to play games and make s’mores. “And you can buy some pretty amazing fireworks in Montana, so every summer we have our own private display.” Christmas is another non-negotiable holiday. And according to Kirstin, they all look forward to doing something they can’t do in California: “Cutting down our own Christmas tree is a major tradition. Sometimes it looks like something Charlie Brown would have, but we love doing it.” Not surprisingly, other activities center on enjoying and exploring the splendor that surrounds them. Mark says mountain biking is one of his favorite pursuits, and come summer, Whitefish Mountain Resort maintains a trail system the family likes to utilize. “We also do lots of hiking, go cross-country skiing on the lake, and try fishing every year, but we’re not very good at it,” he admits. “One year we even floated the Flathead River with a fishing guide – but no luck.” Eight years after renovating their cabin, the couple happily reports that they and their offspring are as attached to the cabin and their Montana vacation rituals as ever. And Kirstin can’t help musing over the fact that they once considered tearing the existing structure down. “Our original intent was to repair it and live there while we built another house, and then take this one down,” she says. “But the remodel turned out so well we just decided to stay put.”

See also Should You Renovate or Rebuild?

“It was almost like designing a ship’s cabin,” says Kirstin about the need for clever design ideas and storage solutions in the cabin she purchased with her husband, Mark. Space was at a premium. “Everything had to have a purpose.” Along with interior designer Heidi Tate, the duo employed every space-saving trick in the book to maximize the 1,100 square feet in the cabin and 275 square feet in the boathouse. Here are eight examples of their no-wasted-space maneuvers:

The Boathouse: Before & After

Exterior: The boathouse was reclad with reclaimed barn wood sourced from Wildwood Eccentrics (www.wildwoodeccentrics.com), while the deck was redone with Alaskan yellow cedar. Note how the deck railing was opened up so the cabin owners could better enjoy their view. During the renovation of the boathouse, all of the windows and one door were reconfigured to enhance the views and traffic flow. The original boathouse roof, wood shakes with an accumulation of moss on them, was replaced with a patina metal roof.