Something Old, Something New | A Blue Ridge Log Cabin Side view of the exterior

Flip and Denise Aspinwall never planned on building a getaway cabin in the Blue Ridge Mountains of Virginia, but when they chanced upon a picturesque lake and large wooded piece of property, they locked onto the idea of buying it and refused to let go — despite the fact that the owner had no intention of ever selling his secluded 70-plus acre lot. “I called him once a week for five months,” recalls Flip, noting that the property also boasted an old cabin. “He’d see my number, pick up the phone, and answer: ‘No, Flip, I’m not interested.’ Then one day, I got a call from him. He said, ‘Guess what? I’m interested.’” Three years later, the property has been transformed into the perfect once-a-month retreat.

The Aspinwalls — who live in Chesapeake, Virginia, where Flip runs a moving business and Denise works as a teacher — dubbed it Buck Isle Farm in honor of a large white-tailed-deer occasionally seen standing on an island in the center of their four-acre lake. “It’s a wonderful place to go and get away from everything and just relax,” says Denise, noting that their two children, Alex, 17, and Tracie, 13, love to fish and go swimming in the sparkling spring-fed lake. “It’s so quiet and peaceful and it really is like we are escaping to a whole other world.” 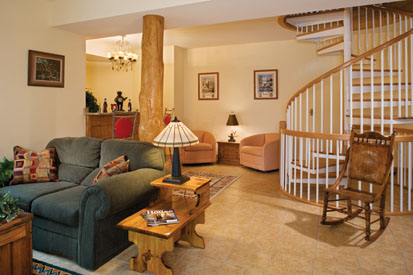 Originally, the couple had hoped to restore the old cabin, but when that proved too impractical and costly, they decided to build a new log home. Flip researched his options and decided on Barna Log Homes in Tennessee. The result is a stunning 3,000-square-foot home, complete with a great room, master bedroom suite, loft, entertainment area, lakeside porch, and two-car garage with a workshop below.

Among the extra amenities: Australian cypress hardwood floors, cedar closets, a Jacuzzi tub and a third-floor sitting area. “It was supposed to be just a nice, small cabin,” admits Flip, who substantially redesigned the home by adding a basement and a center spiral staircase and enlarging the master bedroom suite and family room. “By the time we got done, it turned out to be a whole lot more than what we imagined, but it’s really a nice home now that, if we chose, could be our retirement home.” 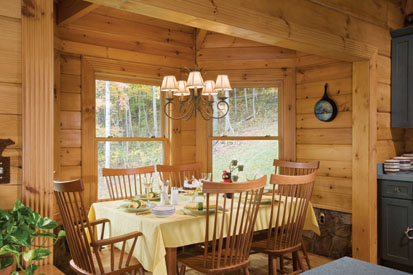 The dining area is classically decorated with early American furniture

Although they went with a new build, the Aspinwalls had no intention of completely exorcising the spirit of the original cabin and property, which was a working apple orchard in the mid-19th century and today borders the Shenandoah National Park. Flip, who worked with neighbor Mike Corbin and a couple of local builders to construct the new home, retained the local rock from the foundation of the older building — including a large stone with initials and the date 1842 etched into it — and used it to erect a massive hearth in the great room.

They also applied it as decorative rock on walls in different parts of the house, including the master bedroom and kitchen. “Every room has some of that rock in it,” Flip explains. “I knew nothing about laying and pointing up rock before we started this cabin, but this artistic trade was a real learning experience for me. Mr. Corbin was my rock-laying mentor.”
★