A Stunning and Sturdy Mountain Cabin

Concrete Logs Make for a Stunning and Sturdy Cabin

A couple builds their Idaho fishing retreat out of concrete logs to great success. Take a peek inside! 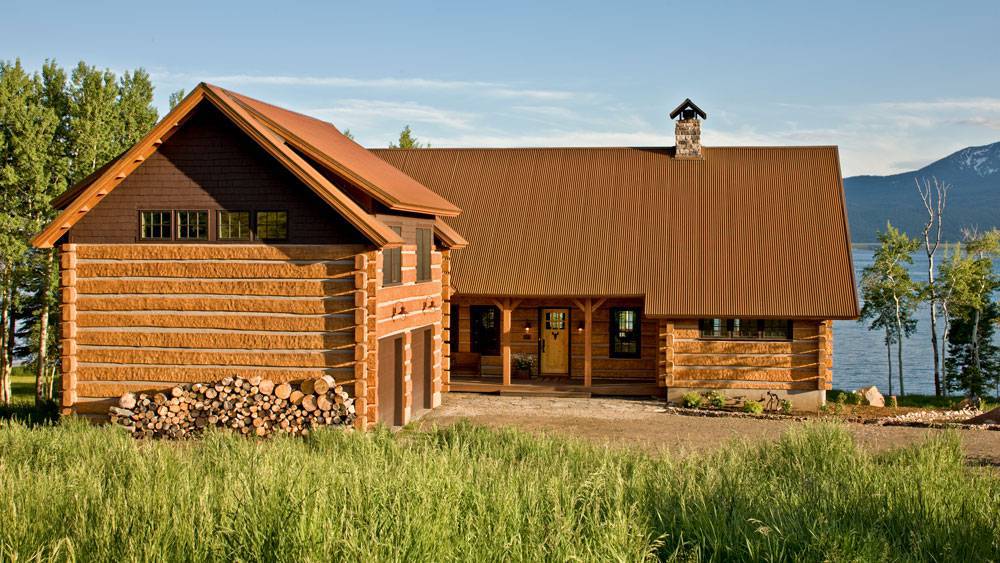 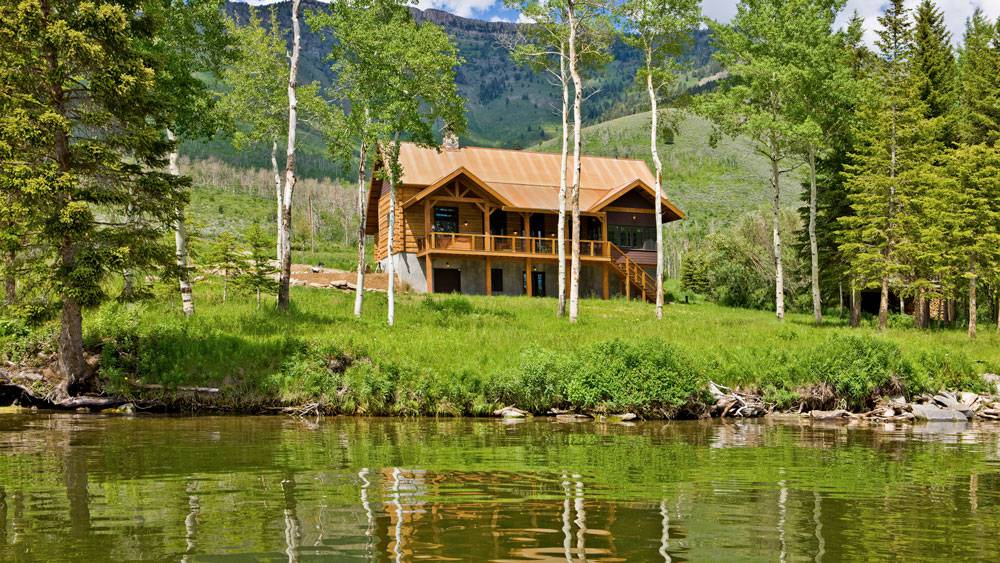 SITING THE CABIN – Views of trout-rich Henrys Lake to the south and protective pine-topped foothills to the north made this the perfect site to nestle a fishing retreat. 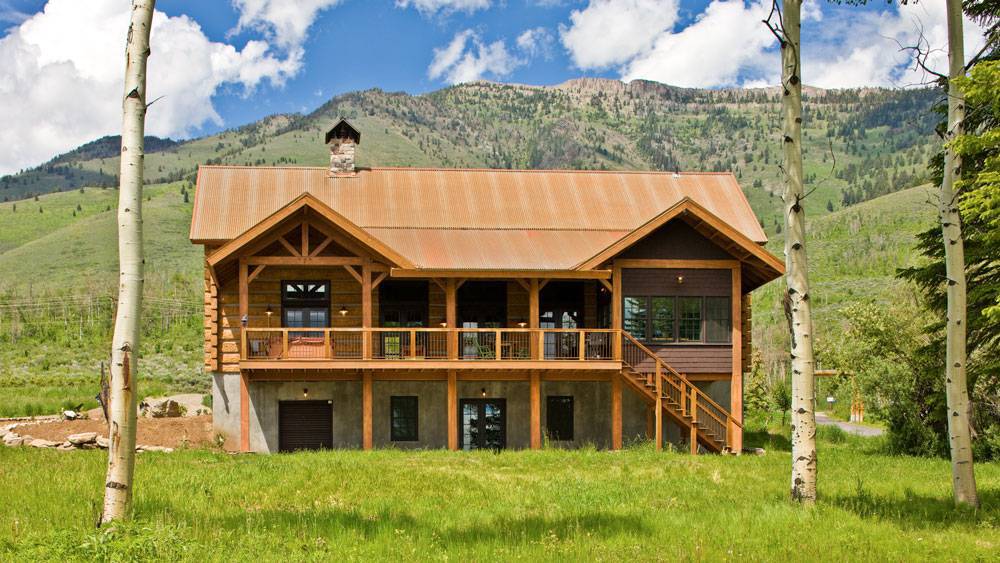 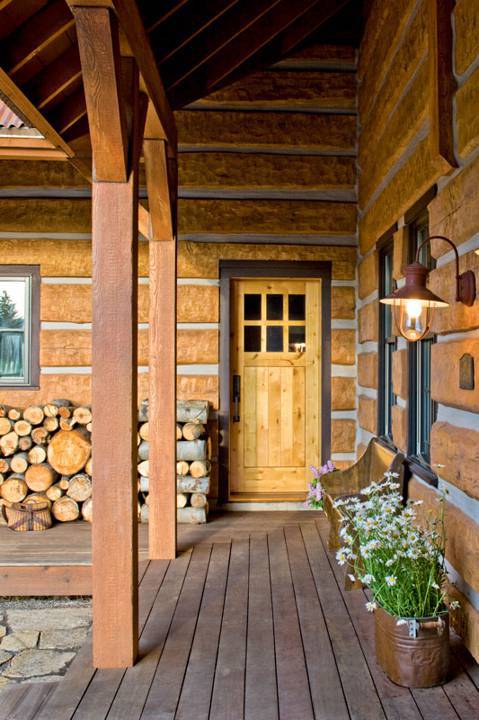 HAVE A SEAT – An antique bench sits outside the door to the tackle room, where the Brewertons and their guests unload their daily catch – and muddy boots – after trout fishing. 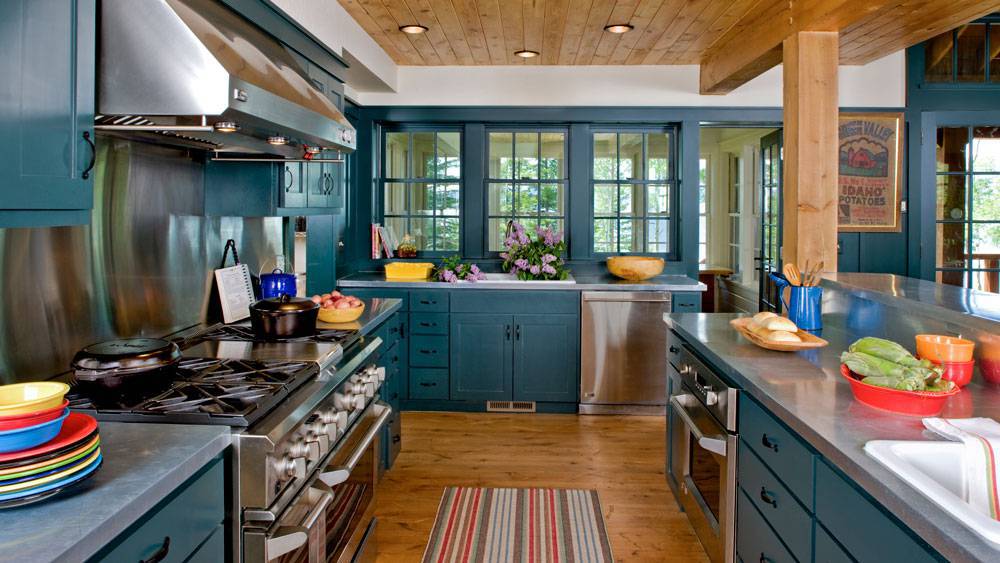 THE HEART – The galley-style kitchen is the heart of the cabin, sitting gracefully under the loft in the family/entertaining room. The custom-built cabinets were painted to match the millwork throughout the room. The appliances are GE Monogram Series; the rug is a cotton runner by Dash & Albert.

Because the kitchen is located at one end of the family room, the design of the kitchen cabinets needed to blend in with the millwork that lines the large space. Therefore, Aimee and Kevin designed the custom cabinets to fit seamlessly with the high board-and-batten wainscoting, all of which are painted a lovely deep green. The countertops are wrapped in brushed galvanized sheet metal. Not only is it inexpensive, but the bright, clean finish hides a number of sins.

The huge hand-laid fireplace is made of granite from a local quarry. A 2x12-inch-thick wooden mantel runs the length of the hall. 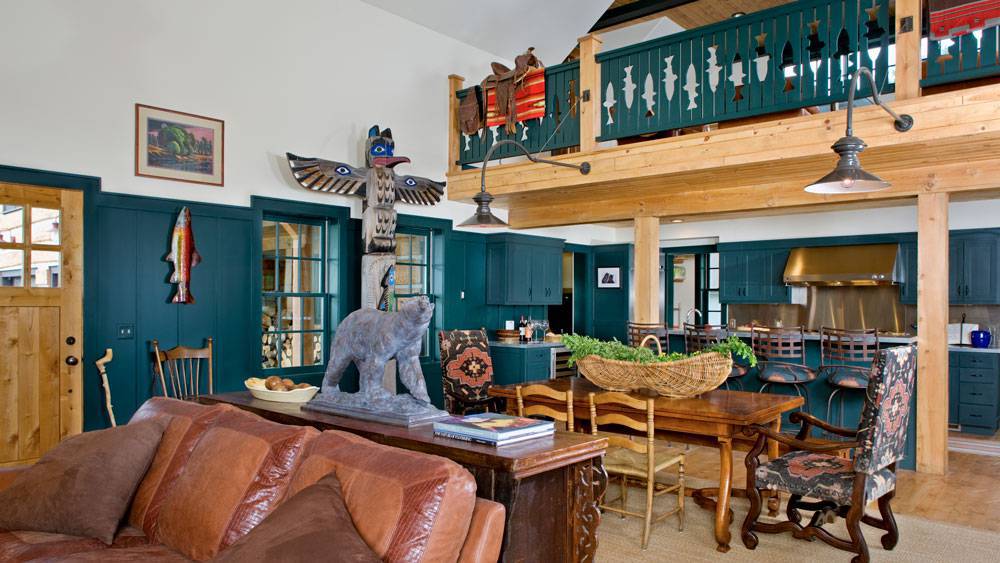 DESIGN TOUCHES – The design of the railing for the loft, that sits above the kitchen and links the main house to the guest wing, reflects Craig Brewerton’s love of fly fishing. (Left) The south-side glass porch is the perfect place to spend a chilly fall day watching the white caps on the lake. Windows stretch across all four sides of the room which makes for a lovely light-filled space that also provides direct views from the kitchen to the lake. 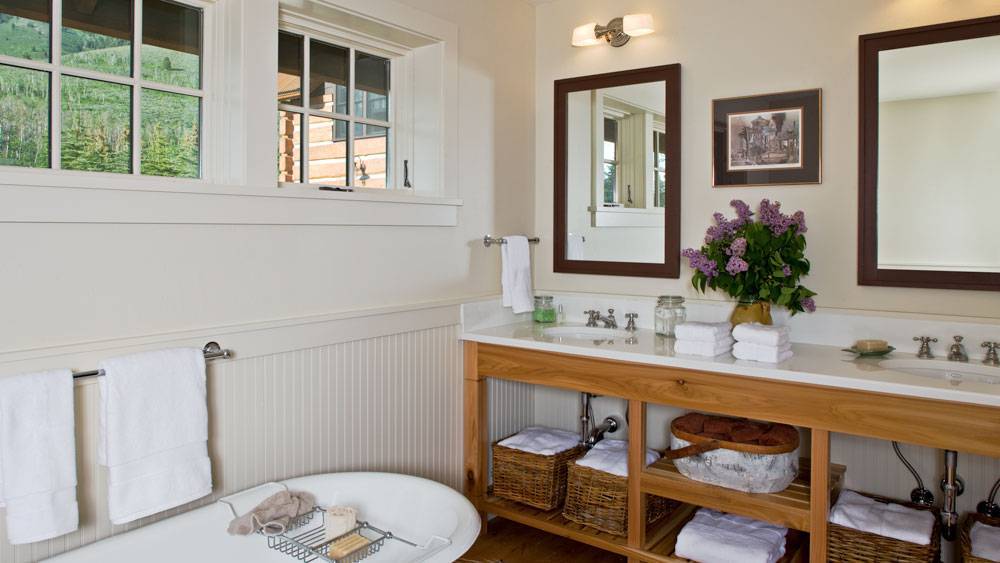 MASTER BATH – The architectural team also designed a master bath that has an open plan to take advantage of northern light and summer breezes from high awning windows. A large, freestanding tub anchors the center of the room, perfect for soaking after a day of fishing. “The open-leg cedar sink stand was designed like a piece of furniture to reinforce the openness of the bath and bring natural materials – which are present throughout the cabin’s interior – into the room,” explains Aimee. 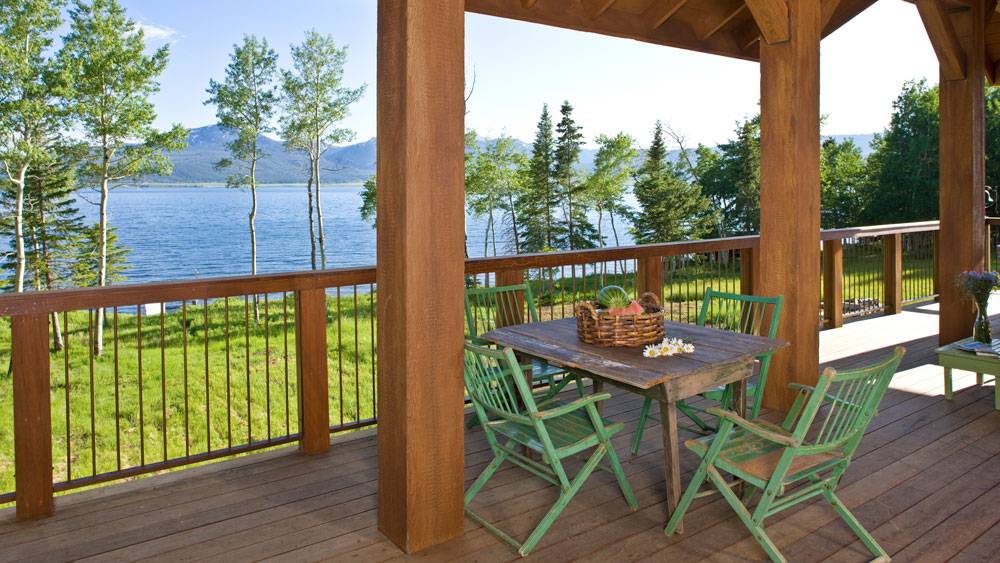 OUTDOOR LIVING – Broad porches on both sides of the house provide essential shade during the summer and protect the structure from snow and inclement weather year-round.

“Go slap a wall!” This is often the first thing Craig Brewerton invites guests to do upon entering his Henrys Lake cabin, which is situated at the confluence of the Montana, Idaho and Wyoming borders. Just to be clear, “go slap a wall” is not synonymous with the phrase, “go jump in a lake.” It’s simply the fastest way Craig can convince new guests that the cabin he shares with his wife, Joan, is made of cement – not timber.
Craig and Joan chose to build their cabin with EverLogs, a concrete composite system, due to its durability and minimal upkeep. “We loved the idea of building a house that we wouldn’t have to continually work to maintain,” says Craig. “And this has the same natural look of a log home, complete with all the striations of the logs.”

The Brewertons spend winters at their home in Scottsdale, Ariz. Then in mid-April, they make the annual 950-mile trek to their pristine paradise in Idaho, located 18 miles from West Yellowstone, Mont. They usually remain at Henrys Lake until mid-October.
The 4,100-square-foot cabin has a loft and a basement, three bedrooms, and four baths (including one in the basement). The square footage includes the two-bedroom guest wing, which sits over the garage. An enclosed upstairs walkway connects the guest wing to the cabin. 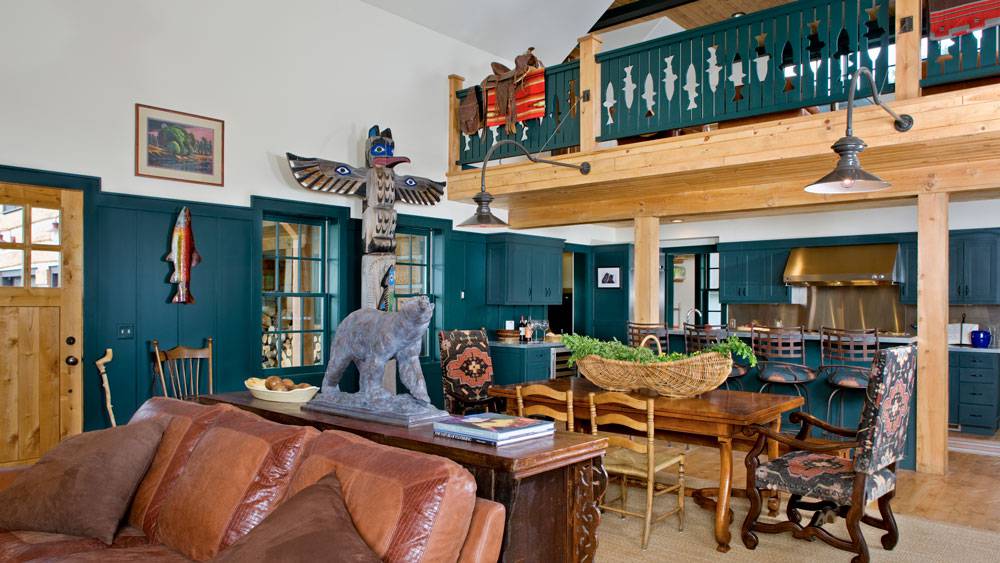 When it came time to decorate, the couple had fun merging their love of art and folkcraft with their passion for fishing. For instance, the trout sconces that hang in the family room, as well as the cutout fish railing in the loft, enabled Craig to inject his enthusiasm for fly-fishing into the architecture of the cabin.
Craig and Joan also have two “gate guards” who watch over the family room. A 12-foot totem pole sits on one end of the room and “Melvin the flying moose head” hangs on the adjoining wall on the other end. “Melvin got his nickname when we were transporting him from British Columbia in a box that flew out of the truck,” explains Craig. “Luckily, he remained unscathed.”
The Brewertons enjoyed outfitting their cabin with special pieces of furniture, including six funky – and fragrant – leather chairs that are placed in the family room, loft and a bedroom. “A buddy of mine was looking to get new chairs for his cigar store, so I asked if I could buy some of the old ones,” says Craig. “They’re comfortable and all broken in!” 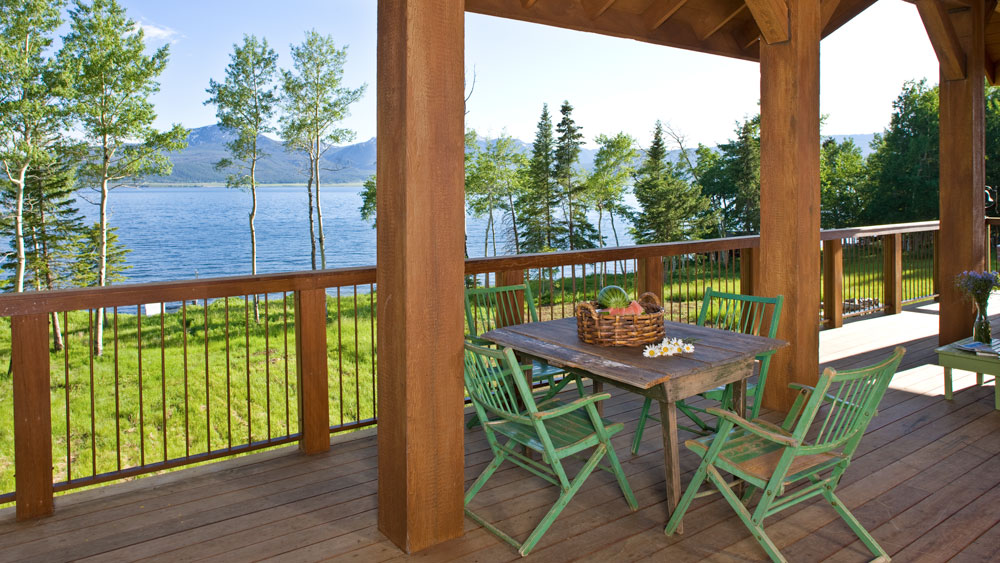 Craig and Joan don’t spend a ton of time resting in those comfy chairs, however. They’re too busy planting flowers, sprucing up the landscaping and erecting crossbuck fencing. (Crossbuck fencing is a post-and-rail design with an “X” pattern between posts that is often used out West to keep animals in but to hold snow back.)
Craig’s favorite outdoor activity, however, is fishing. So he feels blessed to be surrounded by Blue Ribbon trout streams.
“This area is the holy grail of fishing,” notes Craig. Within an hour’s drive, he can be at the Henrys Fork, the Madison, the Yellowstone, the Beaverhead, and the South Fork of the Snake River. The Henrys Fork River is a tributary to the Snake River, which eventually goes to the Columbia River. Every year, Craig invites eight buddies to fly-fish the area with him.
“We’ll fish in Bozeman for two days, Henrys/Madison for two days, sometimes the South Fork, which is south of Jackson [Hole, Wyo.],” he says.
“It depends on where we want to be,” says Craig, who notes that Jackson Hole, Wyo., and Glacier National Park are not too far away. “It’s a wonderful drive on Highway 32 in Idaho, going toward the South Fork, with its rolling hills and potato farms. Plus, the view of the Tetons [mountain range] is amazing.”
When their fishing rods are dry, the Brewertons are likely busy showing friends and family around their outdoorsy area. “We watch the geysers at Yellowstone’s Old Faithful and Mud Pots,” says Joan. “We also go hiking and biking, relax on the dock, and take out the float boat [on Henrys Lake].” 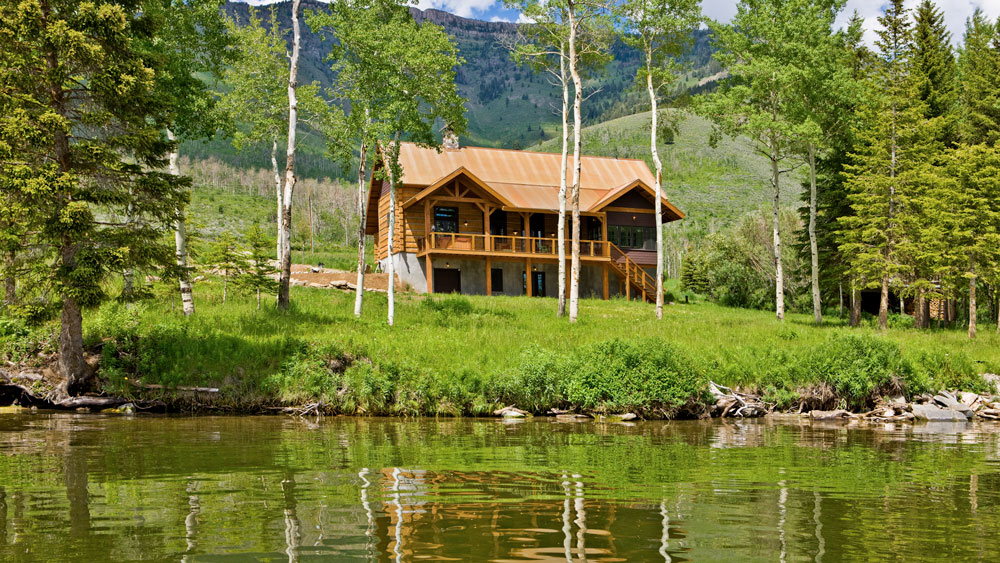 Walking on the Wild Side

The couple takes lots of nature walks, and apparently, so does the wildlife. Craig and Joan regularly spot moose, wolves, deer and grizzly bears cutting through their backyard. In addition, each fall and spring the Brewerton’s have a front-row seat to the elk migration between Montana and Idaho.
“From May through November, we see herds of 50–60 elk moving across the mountain,” says Craig. “The path from Ennis [Montana] to the park or reverse goes along the mountains behind the house.”
The Brewertons never know what wild thing they might witness when they peer out their cabin windows. For instance, last spring before the ice melted on Henrys Lake, Joan yelled for Craig to grab the binoculars. A female Bald Eagle was out on the lake trying to show her eaglet how to snag leeches by pecking through the ice. Yet, rather than taking notes, her eaglet was spacing out.“I’m sure all mothers can relate,” says Craig with a chuckle. “Here’s this mommy, working hard to teach a lesson. Meanwhile, her baby is completely ignoring her.”
It’s these unplanned peeks at nature that help make cabin life so spectacular.
“This is the epitome of what we wanted out of a place,” says Craig. “We couldn’t be happier.”

Plus! All About Concrete Logs 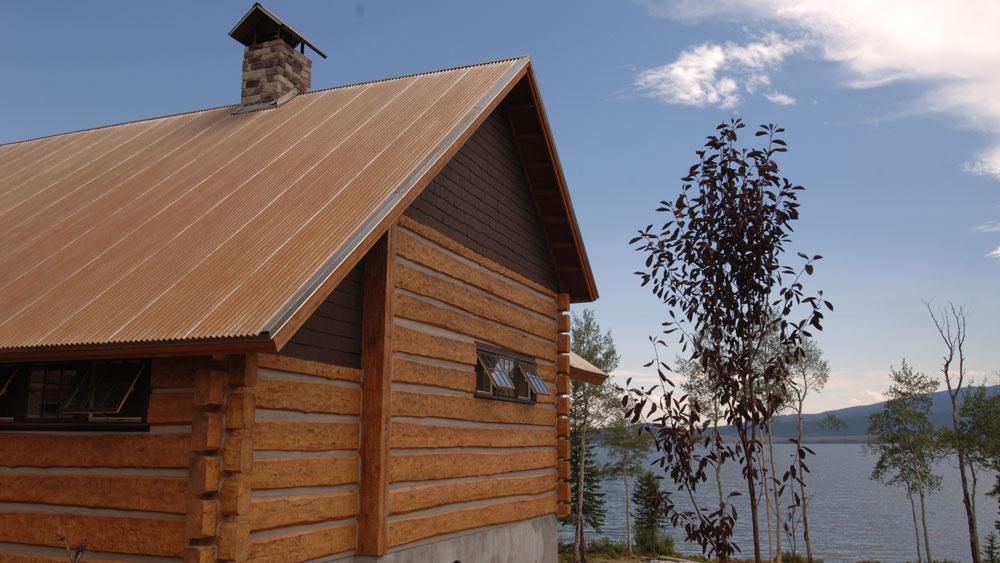 The Brewertons chose to build with a composite log system because it’s durable, airtight and requires very little maintenance.


And their architects, Aimee and Kevin Buccellato of Buccellato Design, LLC, were impressed with how the concrete log homes surpassed, in some respects, the traditional materials. “It was great fun to design a house that took advantage of the best properties of true timber and steel and fused them together,” says Aimee. In fact, concrete logs are a composite mixture of concrete, steel reinforcement and insulation.
EverLog President Stewart Hansen says EverLog cabins are cost-effective to build. “Because our logs are engineered to tight tolerances, no pre-assembly and dis-assembly (at the manufacturer’s yard) or on-site building modifications are required.  This provides substantial savings (both time and money)
on installation.”

Plus, concrete logs won’t leak, shrink, settle, check or decay, nor are they subject to mold or insect infestation. Craig Brewerton says, “I have a friend who lives in South Carolina and he has 20,000 kinds of bugs that want to invade his place all the time. I don’t have to worry about bugs because this [concrete structure] is a bullet-proof deal.”


In addition, the thermal properties of concrete materials far exceed the thermal performance of true timber. Concrete retains its internal temperature well, and during the manufacturing process, EverLogs are cast with additional insulation. According to EverLog Systems, its customers will save an average of 30–40% on their annual heating and cooling costs compared to owners of typical handcrafted wood log homes.
Another benefit: EverLogs are fire-resistant, so cabins made with them (and steel roofs) are less susceptible to the ravages of wildfires. Learn more here.