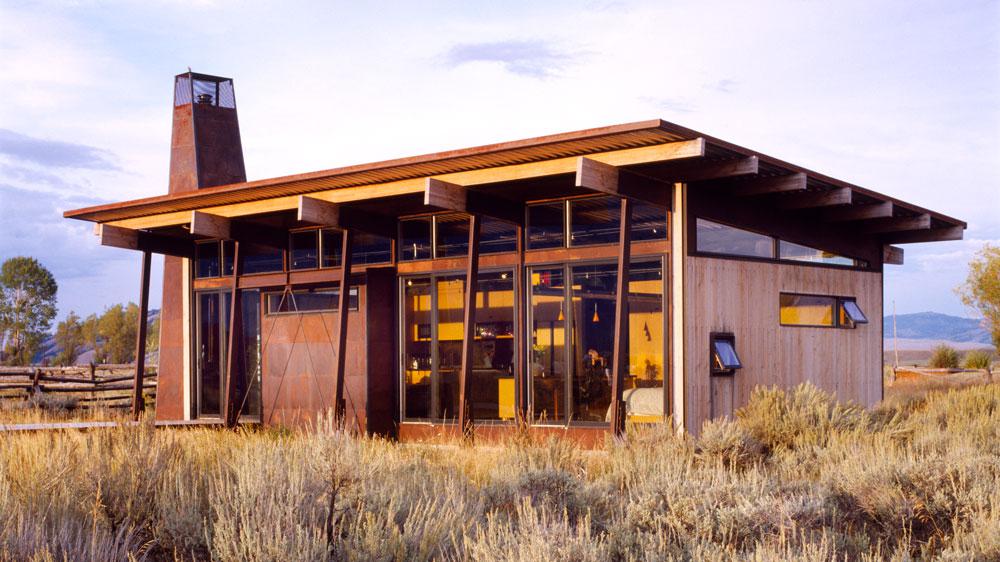 Photo: Roger Wade, courtesy Carney Logan Burke Architects / The exterior of this rustic cabin in Jackson, Wyo., designed by Carney Logan Burke Architects, includes corten steel.
The oldest of the three little pigs built his house out of bricks, because he wanted a house that couldn’t be huffed or puffed down. When it comes to cabins, few would choose straw or sticks, but most aren’t made of bricks and masonry, either.
Choosing durable materials when building, renovating or adding on to a cabin is a key way to ensure that your investment lasts. But what do you choose when you also want a look and feel that works in a natural setting?
“Cabins have more challenging environments,” says John Runkle, P.E., vice president of building sciences at Architectural Testing, which provides certifications and code testing, among other services. “Like mountaintops and mountainsides, for example, where average wind speed is often higher. The temperature swings can be higher, and the winter colder. They’re often built by lakes where there are heavier snow loads,” he says.
Concrete, fiber cement, masonry and steel have emerged as favorites among durable materials. But good old-fashioned wood, probably the most widely used material for cabins, is actually a proven long-term material, provided it’s treated properly.

And treating any building material properly – not just by appying stains or paints, but also by adding elements like rain screens, gutters and roof overhangs –  will shield your cabin or cottage from the elements that will do harm and shorten its life. 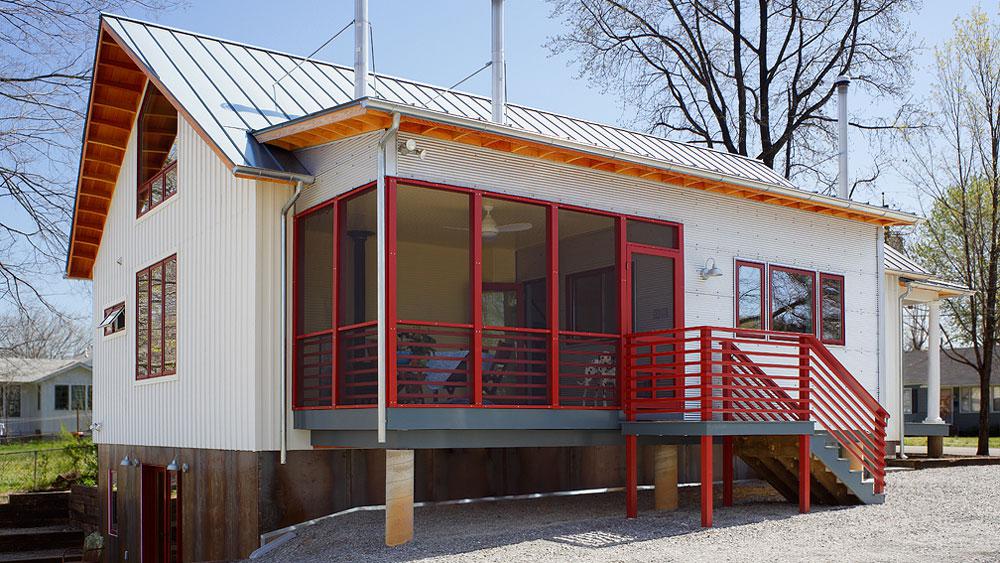 Photo: Courtesy Shawn Stanley/Fern & Roby / This rural home outside Richmond, Va., features galvanized siding, a standing seam metal roof and corten steel cladding on the sides of the basement. The corten sheets were plasma cut by the homeowners’ company, Tektonics Design Group.
There are fine examples of cabins made of steel that are especially pleasing to anyone with a modern sensibility. But this contemporary look is actually an old-fashioned one in places like Scandinavia, where A-frames and other clean-lined approaches provide shelter and peaceful vacations as second homes in the woods or on the banks of fjords.
What makes a cabin a cabin is not necessarily what we see as a “rustic” look, but a building that communes with nature, says Loren Johnson, M.Arch, an architectural designer at Legat Architects in Chicago.
“I don’t think stylistically when I think of a cabin; I think ‘off the grid,’ ” says Johnson. “It’s taking advantage of natural surroundings, of view. The dichotomy between ‘rustic’ and ‘modern,’ I don’t think it necessarily needs to exist.”

And when it comes to a rustic cabin, highly durable corten steel, for example, weathers in a way that can give a cabin a rustic feel that works well in a nature-bound setting, Johnson says.
“It rusts in order to protect itself; by rusting it keeps its structural integrity,” he says. “With that patina, it gains its own kind of rustic-ness.” 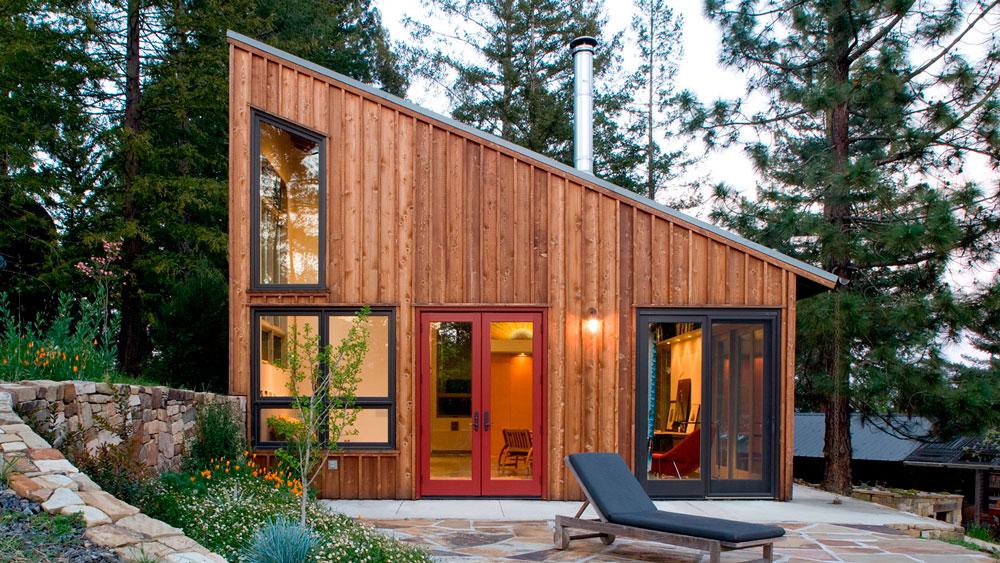 Photo: Courtesy David Wakely / The Russian River Studio, designed by Cathy Schwabe Architecture, features board-and-batten cedar siding on all sides except the north, where metal was used.
And wood, like the trees it comes from, can last 100 years and beyond, provided it’s protected, especially from moisture, says Jack Lilley of Maine Cedar Specialty Products in Ludlow, Maine.
“Cedar’s longevity is better than other woods, and, if it’s taken care of, it will last indefinitely,” Lilley says. “It’s naturally rot-resistant and insect-resistant.”
Alex Wilson, founder of Building Green in Brattleboro, Vt., which publishes information and advice on green building and sustainability, says he’s “a big fan of wood.” Black locust, a species of wood found on the East Coast in southern areas like North Carolina, is an especially durable wood, Wilson says. Although it can be harder to work with because it twists and checks, it’s useful for stringers and other supports.

To make a cabin last, whatever it’s constructed of, it must be protected from the elements, especially water. Proper drainage around the cabin is critical to ensure that rain and snowmelt won’t run toward the structure. Also, gutters and a rainscreen – where there’s an air gap between the siding and a water-resistant house wrap – will also protect a cabin from water leaks and damage from moisture. A rainscreen also furthers energy conservation, Runkle says, something that even cabin owners who attend to energy efficiencies at home often neglect at their cabins.

“We don’t want the energy leaking out, but we also don’t want the rain leaking in,” Runkle says. “In general, we should have higher expectations for performance of our cabins. We have to change the mind-set of the traditional architecture for these types of structures to really achieve the service life we expect, not just durability, but energy efficiency and water resistance too.”
Originally published August 2015
★