This Stone and Timber Structure Is Industrious-Modern Goals

This Stone and Timber Structure Is Industrial-Modern Goals

An industrious man with a passion for preserving the past had a different fate in mind for this crumbling old granary. Now its legacy lives on. 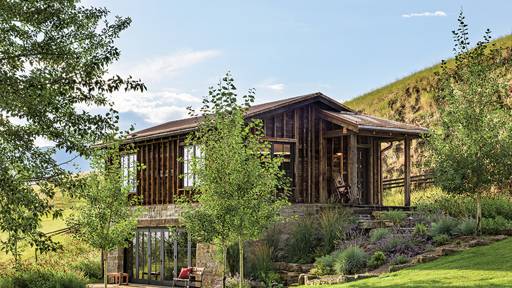 Photo Credit: Heidi Long
For 95 years a small, unassuming stone-and-timber structure tucked into a hillside quietly watched over the sweeping mountains, soft meadows and dramatic skyscapes of Montana’s Paradise Valley. Built as a granary, it was eventually abandoned, and its equipment rusted into forgotten relics of Western lore.

When the Pate family purchased the land in 2010, the granary was so dilapidated it was unsafe for entry. As the new owner, Richard Pate was intrigued by the old granary and its decrepit equipment. Something captured his heart. At this point, the structure’s fate took an unexpected turn.

“My dad hated the idea of tearing it down,” recalls Amy Hyatt, the owner’s daughter and granary’s interior designer. “You could see that it was once a really neat building.”


Richard decided to revive the granary as a blended guesthouse and party barn to accompany the main house — an older cabin that the Pates remodeled. The cabin fulfills a more traditional, Western expectation. The granary, however, is a juxtaposition of history and modern times; an intersection of elemental materials, industrial strength and sleek style. North Fork Builders of Montana dismantled the granary, salvaging materials along with purchasing reclaimed, Douglas fir timbers for its reconstruction. “We recycled about 70 percent of the old granary,” says John Morgen, North Fork’s superintendent. Using these resources and staying true to the granary’s original footprint and appearance, the team took on the task of rebuilding.
See also The 8 Best Board Games to Play at the Cabin

A poured-concrete foundation makes up the lower level with an open common area and full kitchen with an entertainment bar. Six, full-glass, wood-paned doors open-up accordion-style converting the entire daylight basement into a space that feels more like an outdoor room with three walls.


Outside, a true timber-framed outdoor hearth complements the granary. Anchored into the rock cliff, the fireplace’s stones match those of the granary. The mantel shows off various bones and horns the kids have collected around the property.
See also How One Minnesota Mother Embodies Healthy Living & Sustainability

For all its rustic and rugged exterior, the interior is anchored with elements that would be equally at home in a swank Manhattan loft.

“Amy told me she had a disco ball in her living room, and that any ideas were fair game!” exclaims Jerrad Inlow, the creative force behind Elements Concrete.

For the bar, Jerrad selected a live-edged, California walnut slab with a waterfall end and set it atop a concrete base. On the bartender side, programmable LED lights refract on ice that melts and spills down a concrete waterfall to a floor drain. A similar water feature is built into the upstairs, bathroom sink. The effect is spectacular.

Sadly, Richard has passed away but lived long enough to see his vision for the project come to life. The granary still holds something of great value; Richard’s spirit and ongoing legacy for his family to share time together in Montana’s outdoor paradise.


“Being able to continue doing the things he loved most was his biggest gift” says Amy. “We cherish our summers here.”
See also Tour a Luxury Royal Gorge Cabin On the grounds, the outdoor fireplace’s native Montana stone is the same as that used on the cabin’s walls. Relics from the granary and other outbuildings are on display at the outdoor timber-framed pavilion. Much of the interior furniture was selected by Amy Hyatt and her father, Richard Pate, from Montana Expressions. Amy wanted a simple feel that was cozy but not gimmicky to a rustic home. She used a lot of leather, glass, clean lines and muted tones.

For the floating stairs, steel was embedded into the foundation to match the stairs’ rake. I-beams were welded to these pieces and capped with 3-inch-thick oak wood. Painted plaster in a muted gray keeps the stairway wall clean and simple. The concrete floor’s mottling comes from the stain.

Designed and constructed by Jerrad Inlow, the kitchen cabinets are framed in steel with reclaimed oak wood.

The party bar’s LED lights (see insets) can be programmed in different colors and patterns to match a mood. (Think holiday tree lights or pulses of light in a team’s color for the big game.) Concrete runs across a basin designed to hold ice. The LED lights refract on the ice, giving the space a futuristic feel — a sharp contrast with the natural, organic textures and materials. The wine rack is cast from an immense, concrete monolith. Individual caves for wine bottles keep wine at ideal temperatures, naturally.

The upstairs sink was constructed with the same materials as the downstairs kitchen; walnut and concrete. Similar to the bar, the walnut slabs feature artistic details from Jerrad. Tin is infused into the checks and made flush for unexpected, metallic accents. Like the downstairs bar, water from the sink cascades down the side and empties into a hidden drain.