Tour The Tiny Cottage in the Woods

Tour a Tiny Cottage in the Woods

The cabin lifestyle is not just some run of the mill hobby or pastime; it’s a passion. And some people, like Rebbecca Abair, take it to extremes. Rebbecca, of Port Orchard, Wash., puts her time, robust energy and talents into creating a fairy tale cluster of cabins in the woods. 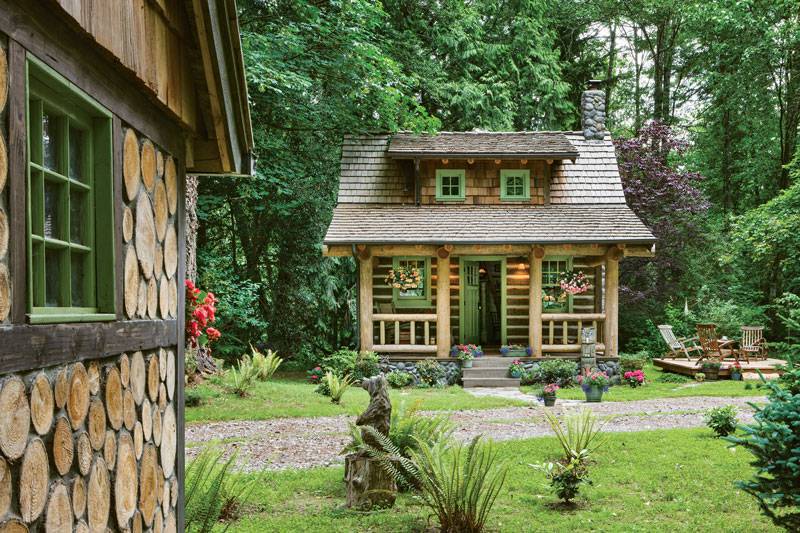 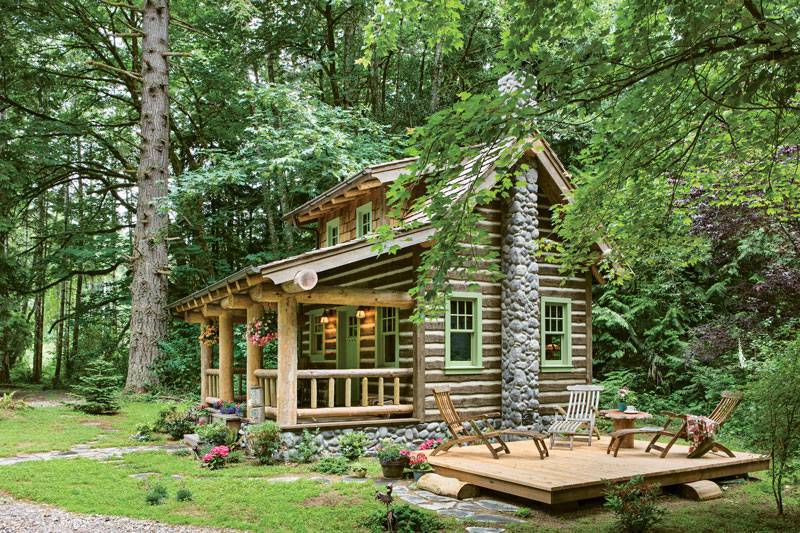 Rebbecca Abair incorporated a variety of rustic building materials into the 432-square-foot Squirrel cabin, including handhewn milled siding, a log post-and-beam porch, and river rock chimney and foundation facing. Half logs serve as steps to the cedar seating platform. 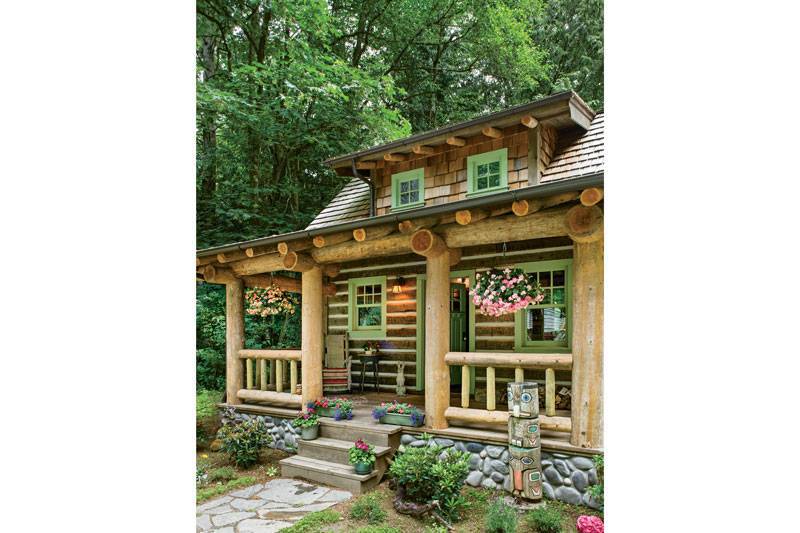 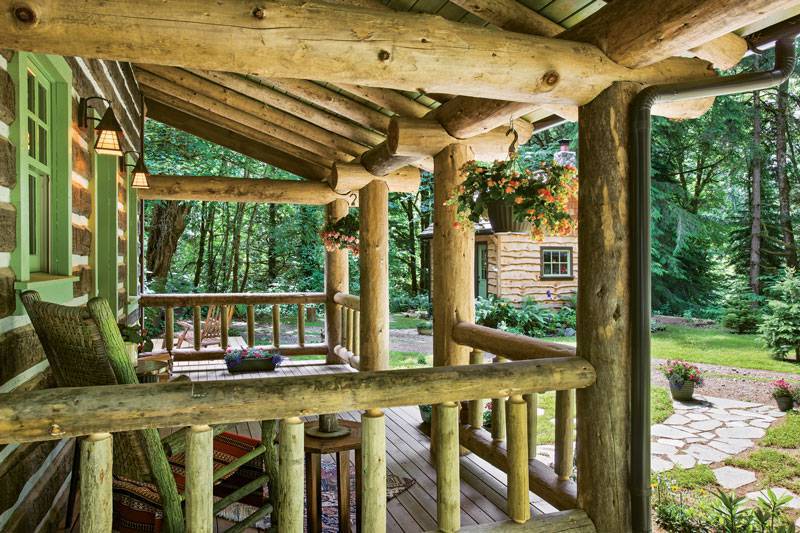 Photo: Roger Wade
A path of natural flagstone leads to the cedar stairs and porch of Squirrel cabin. Colorful pots of annuals team up with perennial shrubbery that surrounds the cabin’s foundation. 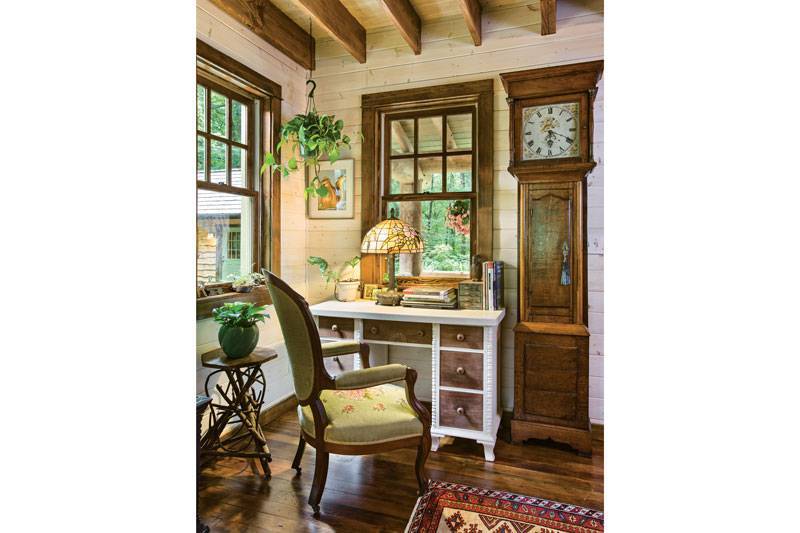 Rebbecca laid the brick hearth for her wood stove, which is the sole heat source for Squirrel cabin. Oversized double-hung Kolbe windows flood the living room interior with natural light. Reclaimed flooring gleams after Rebbecca salvaged it from a 1927 house, planed it smooth and finished it with a clear coat of nontoxic polyurethane. 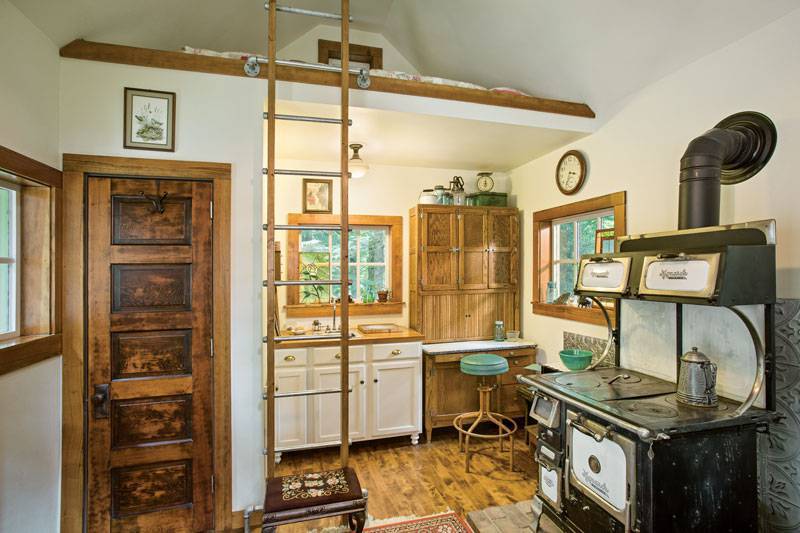 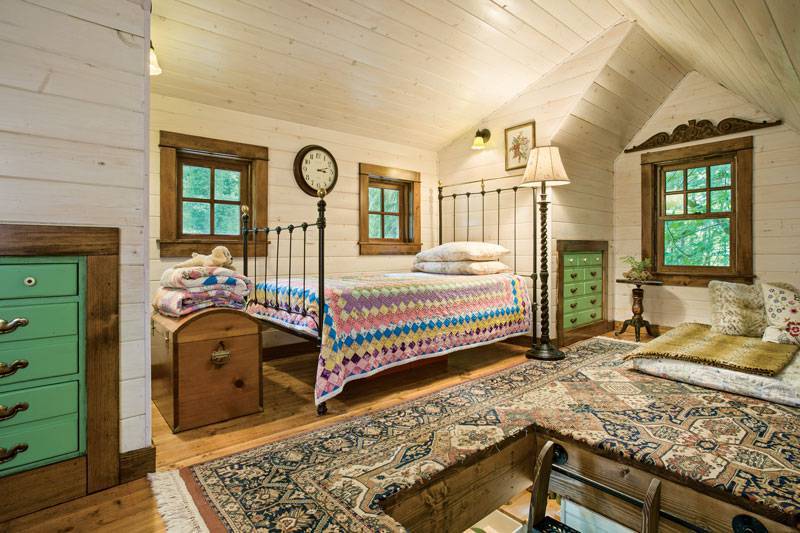 Whitewashed tongue-and-groove pine brightens the Squirrel sleeping loft. Rebbecca sleeps in an antique iron bed beneath windows that take in a canopy of green. She enjoys collecting vintage quilts, such as the “Around the World” bed covering. Old dressers were painted green and installed in knee walls. An oriental rug was modified to receive the loft ladder through a cutout in the floor. 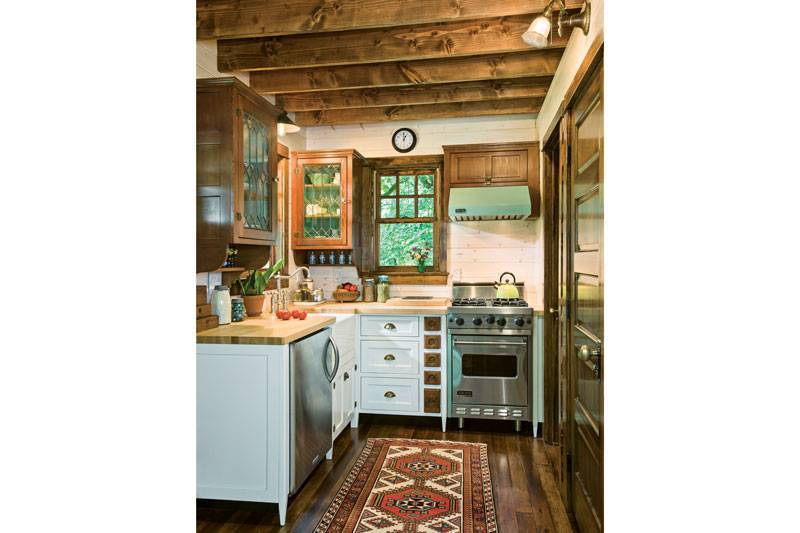 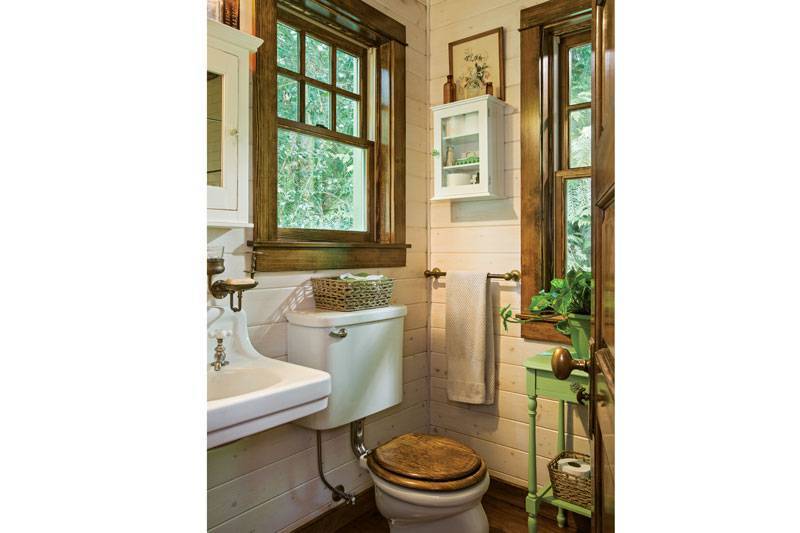 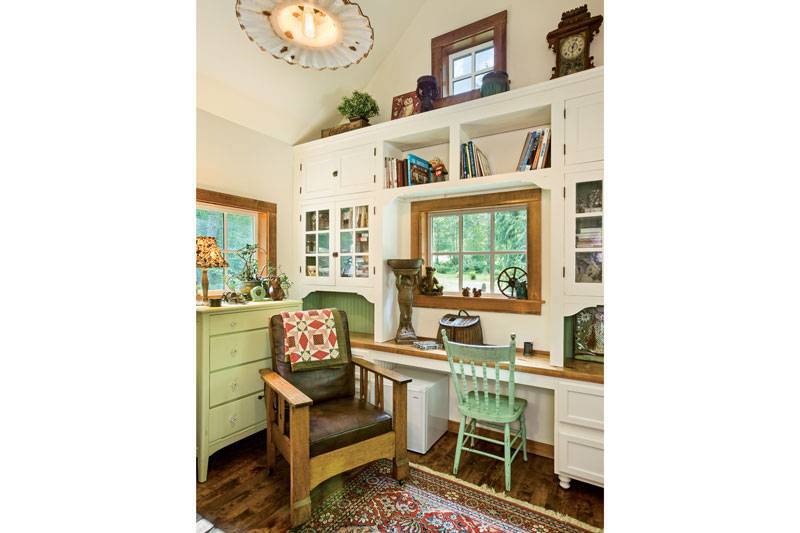 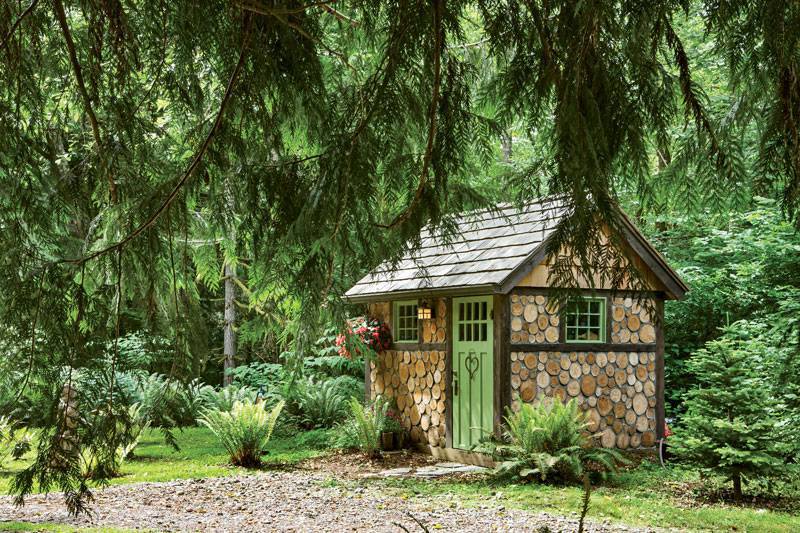 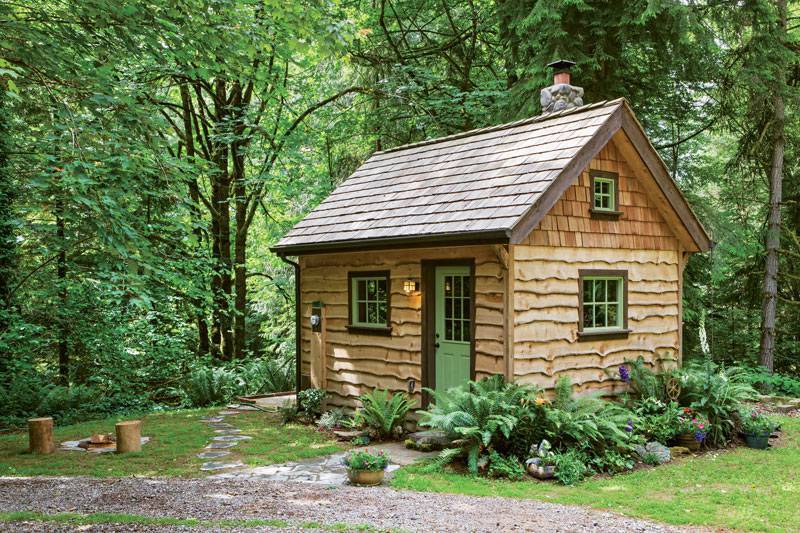 Rebbecca has had a love for designing unique spaces and landscapes her entire life. “As far back as I can remember,” Rebbecca says, “I have been fascinated with small spaces and always pictured myself residing in a little log cabin in the woods.” Her father, a talented design and construction visionary in his own right, taught his little girl how to do roofing, mix concrete and build all manner of things, from furniture to structures.

To date, Rebbecca has designed and built eight different cabins and cottages, from tiny sheds to a timber-frame house on the west shore of Puget Sound. “Creating my buildings came quite naturally to me,” explains Rebbecca. “My knowledge and passion for design and construction clearly stems from early childhood, but I have greatly enhanced my skills through books, magazines and, of course, the Internet. The actual building of my various structures has afforded me the best education of all. Nothing beats hands-on experience.”

While residing for six years in her shoreline timber-frame home, Rebbecca experienced an interesting revelation. “The house was only 1,600 square feet,” she says, “which is relatively small compared to many residences on the Puget Sound. But I realized that I barely utilized much of the space. I wondered if I could significantly scale back and build a tiny version of the house to live mortgage free.”

Rebbecca spent months searching for just the right property for her cabin compound. She found it by pure chance, when following a detour route in a road construction zone and spotting a “For Sale By Owner” sign on a gate. “It was in an area outside of town that I love,” reflects Rebbecca.

“The property was totally overgrown and once had an old farmhouse and three small cabins on it,” Rebbecca says. “The house burned down i the '50s, and the remains of the other cabins were full of junk and in awful shape. They had to be demolished.” The upside was three acres of giant cedars, hemlocks and fir trees that were stunningly beautiful and perfectly suited for everything Rebbecca had determined to build. It even had a cascading salmon stream, Curley Creek, flowing through a ravine on the property.

Her first cabin, which she calls Owl, was established in 2012. It is 12x16 feet, a whopping 200 square feet, and took her two months to build. While it was originally intended to be a storage shed for construction tools and materials, Rebbecca decided to plumb the Owl cabin and install a toilet and sink. “Then someone gave me an antique wood cook stove,” explains Rebbecca, “so I went to work constructing a masonry chimney for it and covered it in river rock. I found an antique kitchen hutch and repurposed it by cutting it in half and adding a desk and cabinet below. I spent a great deal of time residing in this tiny cabin, sleeping in the little loft, as I continued construction on the property.” Owl now serves as a guest cabin and Rebbecca’s design studio. The siding is live edge cedar provided by Woodwise Mill.

Each of Rebbecca’s cabins has a different type of siding to give it unique character. “I chose handhewn log siding from Richard Gunst at Pioneer Log Siding Co. for the main cabin and accented it with round log posts and railings for architectural contrast and interest,” says Rebbecca. She used green paint accents and cedar shakes on all of the buildings to tie them together and give them her signature “fairy tale look.”

The tiniest cabin on the property is an 8x10-foot timber-frame pump house (also built in one month during 2012), which Rebbecca sided with round slices of cedar logs. After gluing the rounds to OSB sheathing with construction adhesive, she applied mortar between them to resemble cordwood construction.

Rebbecca’s main cabin, which she named “Squirrel,” is 13x18 feet, with a 8x9-foot addition and boasts 302 square feet on the main floor and 130 in the sleeping loft. The front porch is 8x13 feet.

“I had the Squirrel foundation poured in 2012 and then saved up enough money to start building in 2013,” tells Rebbecca. Logs for the porch had been harvested locally, then dried and stored at Woodwise Mill in Port Orchard for a period of nine months. “I hand-built the porch railings using a tenon cutter on my drill,” she says. “Each log is hand-scribed and sanded to fit the big posts.” Rebbecca laid all of the masonry chimney blocks by hand, then faced them and the entire foundation with river rock. She painstakingly installed Richard Gunst’s handhewn 2x8-inch fir log siding with screws, then applied Perma-Chink between each board.

The Squirrel cabin features an open space living room with a ladder to access the sleeping loft. “I wanted a part of my father[’s craftsmanship] in the house,” Rebbecca shares, “so I enlisted his help to build the ladder.” The tiny kitchen is big on artistic character, designed by Rebbecca and outfitted with cabinets that incorporate antique sewing machine drawers and vintage leaded glass door panels. Herb’s Cabinets in Port Orchard gets the credit for bringing Rebbecca’s whimsical cabinetry designs to life.

“I love my little kitchen,” says Rebbecca. “I went all out and bought high-end kitchen appliances (Viking stove, KitchenAid under-counter fridge), a white porcelain farmhouse sink and maple butcher block countertops from John Boos. I had the range hood custom-painted in classic aqua auto paint from the ’60s. My favorite color!”
The bathroom has a custom-tiled shower and antique sink and toilet fixtures that Rebbecca found, both are 1927 Standard models.

To maximize a feeling of spaciousness in the Squirrel cabin, Rebbecca left the roof rafters and loft floor joists exposed. Walls are 1x6-inch tongue-and-groove pine that she sanded, whitewashed and finished with polyurethane. Flooring throughout the cabin is reclaimed fir that came from a 1927 house. “It had been covered in blue carpet that was glued and stapled on,” says Rebbecca. “I removed thousands of nails and staples from the wood, ran it through my planer and was rewarded with a beautiful ‘free’ floor!”

In 2015, Rebbecca added an 8x9-foot room adjacent to the Squirrel’s original living room area. “I intended for it to be dual purpose – a kind of dining and sleeping lounge,” she says. The idea occurred to her not long after she had a dinner party and all of her guests sat on the floor to eat their meal. “As it turns out,” Rebbecca continues, “I do use it for entertaining, but mostly as a TV room.”

Rebbecca is currently in the planning stage for yet another addition to her cabin. “This next room,” she describes, “will be accessed from the existing bathroom. I’m moving the toilet and expanding the window space into a doorway that will lead to a cozy bedroom, built the same dimensions as the first addition.” The toilet will be relocated to a small room in the bedroom addition. “I’m excited to get started,” says Rebbecca, “and hope to have the foundation completed this year and the entire addition finished by July of 2018.”

Rebbecca credits her design and construction accomplishments to her steadfast desire for independence and self-reliance, approaching her goals and life in general with little fear of failure. “Most recently, I am learning the arts of wood carving, blacksmithing and cedar weaving,” says Rebbecca, “and am hoping to incorporate these skills into future projects.”

Without a doubt, Rebbecca's vision will one day become reality. What will she dream up next?
★