Transforming a failed renovation into a rebuild, a couple capitalizes on a breathtaking location with a charming timber cabin. The stunning results speak for themselves. 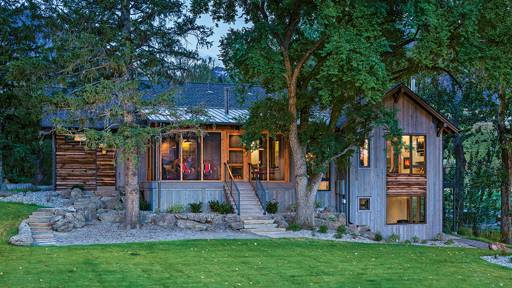 Photo Credit: Karl Neumann
When life gives you lemons you make lemonade, and when it gives you a 1900’s farmhouse with flawed bones but a prize location and million-dollar views, you rebuild.

That was the philosophy of the homeowners of “Lazy Heart,” a modern-rustic timber getaway on a gorgeous stretch of land in Montana’s aptly-named Paradise Valley, not far from Yellowstone National Park.


Against the astounding, almost mystical backdrop of the Absaroka Mountain’s craggy peaks reaching 10,000 feet into deep blue skies and alongside the clear, even bluer waters of the Yellowstone River, the timber-and-stone cottage could easily be overlooked.
See also Road Trip: Flathead Lake in Western Montana

But much like narrowing in on a single bloom in a flowering meadow, a closer look at the home reveals a subtle but inspiring beauty. Outside, stacked-stone walls and walkways seem to rise naturally from the earth. Inside, history seeps through the locally-sourced antique timbers, replete with original distress marks. Decor in shades of green, blue and pops of red mimic the color of the outside landscape. The entire three-level structure is nestled into trees heavy with eagle’s nests. (The trees were also home to a mama bear and her two cubs who took up residence during construction.)

The understated size of the rooms and the home’s indigenous feel is purposeful. “A lot of people building their vacation homes fall into the thinking that bigger is better, but these homeowners never wanted the house to be in competition with the grandeur around them,” says Laura Fedro of Laura Fedro Interiors. (Perhaps because of their professions — both homeowners are heavily involved in the world of professional fly-fishing — they’ve learned that a symbiotic relationship with nature is better than one born out of competition.)


From the start, the couple planned to keep the impact to the home’s site minimal. The whole renovation project started out with plans to add a small addition to the hundred-year-old house, but the deeper they got into the process, the clearer it became that a fresh start was a must. “When we removed the siding, we uncovered major structural deficiencies,” explains builder Tim Rote of Dovetail Construction.
See also The Western Virginia Cabin with Countless Family Memories

To help them create a new home, the couple reached out to Andrew Brechbuhler of Brechbuhler Architects. Together, they decided to maintain the original structure’s footprint and four-bedroom design but make it more livable for a modern family. “We knew from the start we didn’t want it to overpower the site,” he says. “We just wanted to tweak some things to make it fresh.”

The first thing they did was change its orientation. “The house had its back to the views, so we flipped it to give the great room those big mountain views,” Andrew says. The new plans also called for an open design with a better flow, so they shifted the location of the staircase, raised the ceilings and added big picture windows. And though the house is on the larger side at roughly 3,700 square feet, its thoughtful design feels every bit the snug cabin its intended to be. For additional coziness, they also updated the home with a geothermal energy system and radiant heat. “How the spaces move into one another is really comfortable,” Andrew says. “The whole house lives better now.”


Laura agrees: “You can just feel the peaceful energy. The whole project is humanly scaled, and their lives and the surroundings are richer for it.”
See also Fire Restrictions: What Does a Fire Ban Mean?

Reclaimed wood, gray vertical barn board siding and dry-stack stone combine with subtle steel details and metal roofing to create a structure that looks like it has grown into its present state organically over time.

“Because the setting is so natural and really enclosed in this wonderful way with all the trees, we intentionally chose some vibrant colors to make it pop,” says interior designer Laura Fedro. A Southwestern-themed rug warms up the space and sets the tone for more jolts of color from the yellow and red accent pillows.

Architectural concrete and an angular design puts a fresh take on the fireplace, which relies on radiant heating to keep the house cozy during the long winter months.

Bi-fold doors disappear to connect the great room to an elevated porch with a southern exposure and views of Yellowstone National Park in the distance.

Concealing the refrigerator with wood paneling and wrapping the range hood in the timbers used in the rest of the kitchen help the open concept flow seamlessly into the adjoining living areas. Supplementing the casual dining counter, a leather-and-wood banquette ensures plenty of seating at mealtime.

Just off the home’s entry, built-in lockers help the family corral coats, bags, shoes and more. Smaller cubbies up top create the perfect spot to stash on-the-go items, like keys and sunglasses, while a larger one down below serves as a dog feeding station.

Bunk beds in the home’s lower level are made of re-sawn timbers. “Cutting off the old timber surface gives them a smoother feel and appearance but maintains some character,” explains the home’s builder, Tim Rote. Regionally themed bedding adds color to the wood-dominant space.

A screened-in porch framed with reclaimed lumber is accessible off of the great room and master bedroom. It’s a favorite spot for a morning cup of coffee next to the soapstone fireplace.

Watching horses graze and eagles soar is an everyday event at Lazy Heart. “There’s a reason this place is called Paradise Valley,” says Laura. “The setting is just unbelievable, and the cabin is a jewel.”

Reclaimed wood, gray vertical barn board siding and dry-stack stone combine with subtle steel details and metal roofing to create a structure that looks like it has grown into its present state organically over time.